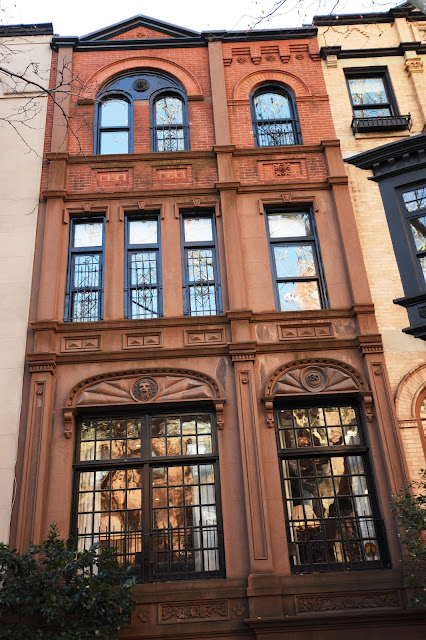 Largely forgotten today, the architectural firm of C. Abbott French & Co. was prolific in the 1880s.  The extent of their activity was evidenced on a single day, November 3, 1888, when Architecture and Building listed four projects they were designing—two rows of townhouses, a tenement building and a 5-story flat.  Two of the commissions were for developers William J. and John P. Walk.

At the time another C. Abbott French & Co. project, also for the Walks, was being completed on East 95th Street.  A year earlier, on February 19, 1887, the Real Estate Record & Builders’ Guide had reported on the 12 “Queen Anne private residences” being designed.  The total cost was estimated at $169,000—an average of $361,000 each today.

Stretching from No. 116 to 138 East 95th Street, the charming row of three-story brick homes were completed in 1888.  The architects had produced string of delightful houses which had only their architectural style and charm in common.   Each flexed its individuality with oriels, arches, terra cotta plagues or medallions, and stained glass—yet the similarity of the treatment created a harmonious flow. 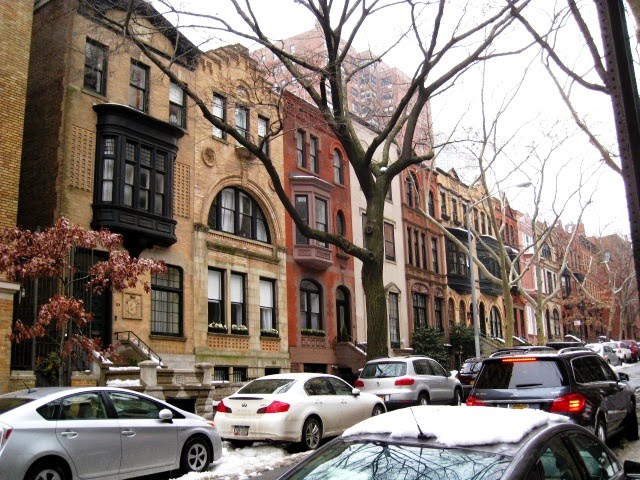 Among the new homes was the 18-foot wide No. 130.  Three floors of brownstone (including the English basement) supported the brick-faced uppermost story.  Above the brownstone stoop the tympanums over the entry and parlor window mimicked fanned and folded fabric behind two medallions—the one over the doorway announcing the address, and the one over the window depicting a fearsome face.

The expected asymmetry of the Queen Anne style allowed for a single window that illuminated the stairway hall, and grouped openings in the front-facing rooms.  Below the heavy brick eyebrow that embraced the arched openings of the third floor was another terra cotta medallion with a watchful beast. 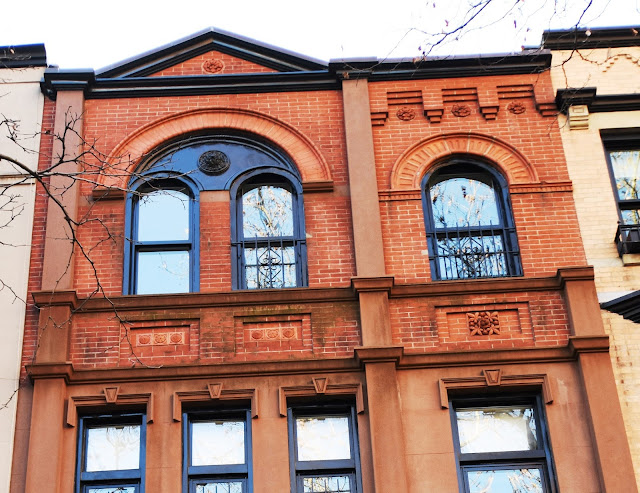 The Financial Panic of 1893 caused mayhem across the country.  Stock prices plummeted, 500 banks closed, and 15,000 businesses failed.   Even moneyed shoppers cut back on luxuries—like furs.  The downturn in business may have prompted Simmons to try to lease the house in 1895.  An advertisement appeared in The Evening World on March 5:  “Beautiful Queen Anne style house, furnished or unfurnished; terms reasonable.  J. Simmons.”

On November 27, 1896 Jacob Simmons filed for bankruptcy.  And he quickly took steps to prevent losing his home.  The Sun reported that “Jacob Simmons and wife” transferred the title to David S. Cahn for $1.00.

Two weeks later a sheriff arrived at the door of No. 130 East 95th Street.  He was looking for hidden furs.  The Sun reported on December 20 that $6,000 worth of skins purchased from Joseph Ullman & Co. was missing.

“It is alleged that Mr. Simmons obtained the goods by misrepresenting his financial responsibility, and that he has turned them over to his wife.  The Sheriff visited his house and several other places, but found none of the goods,” reported the newspaper.

The personal humiliation of the once highly-respected merchant continued when the New York City Law Department’s annual report listed Jacob Simmons as being in arrears for personal taxes.

In 1898 Jacob Simmons was in default of $13,343 on his mortgage and lost his house at foreclosure.  Sold at auction, it was owned by Charles Spiegel until 1906 when he sold it to the well-known mustard manufacturer, Charles Gulden.  Gulden was active in the real estate market and the same day that he bought No. 130 he purchased No. 123 East 95th Street, both as rental investments.

Gulden’s first tenant in No. 130 was Dr. B. Morje, who had been living at No. 1291 Madison Avenue.  The German-born internist was affiliated with the German Hospital.

He was applauded in 1907 in the Annals of Surgery for his treatment of a 25-year old trapeze performer.  The woman was admitted to the German Hospital on September 26, 1907 suffering from chronic hemorrhages.  They had begun 14 months earlier after a trapeze accident.  On October 12, 1907 Morje performed a blood transfusion on his now-anemic patient. It was a risky and unusual procedure at the time.  Although the woman eventually died from her unknown ailment, the medical journal was impressed at Morje’s aggressive and resourceful treatment.

For decades, beginning at least in the mid-1920s, No. 130 would be home to George S. Mittendorf and his family.  The attorney had been educated at Yale, Columbia University, and the University of Leipzig.  Widely remembered as a college athlete who managed the first Yale Hockey team, he had been a member of the law firm of Mitchell, Capron, Marsh, Angulo & Cooney since 1910.  He was also a Vice President and Director of the Manhattan Eye and Ear Hospital.  Mittendorf’s most visible client was the John Jacob Astor estate and he personally argued the Astor cases.

The house was the scene of daughter Matilde’s wedding to Edmund Louis Grey Zalinski in 1939.  Four years later Constantine Mittendorf, a lieutenant in the US Navy Reserves, married Marcella heron in the rectory of St. Paul’s Catholic Cathedral in Pittsburgh.   The Middendorfs were still in the 95th Street house on November 11, 1952 when George died in Roosevelt Hospital at the age of 74.

In 1963 Otto Sander purchased the house “for occupancy;” and by 1982 it had become the Galenson-Rolphe Infant Center.  Affiliated with Mount Sinai Medical Center, the center treated children under the age of three in early childhood development. 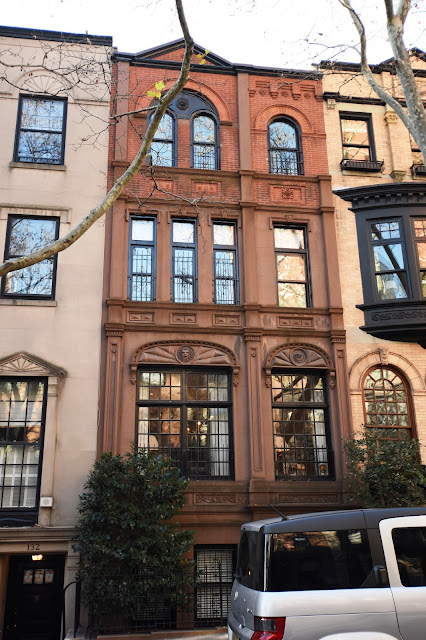 By the time the house was reconverted to a single-family home in 2009, the dog-leg stoop had been removed and the doorway renovated to a many-paned window.  But the façade survives as an integral element of C. Abbott French & Co.’s delightful Queen Anne row.

photographs by the author
Posted by Tom Miller at 4:47 AM