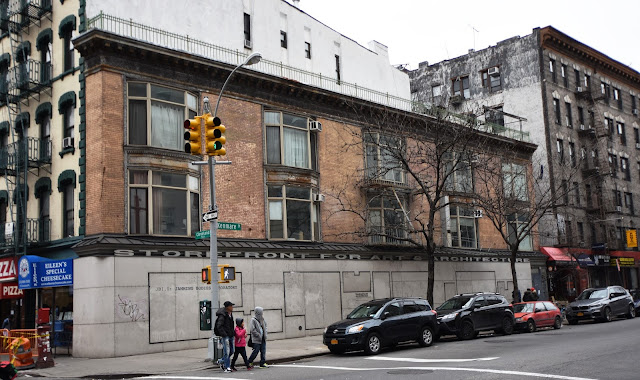 The magnificent Williamsburg Bridge opened on December 19, 1903 to much fanfare.  What the city planners had not anticipated was the traffic congestion on the old, narrow streets that the new bridge would cause.  To relieve the condition, a four-block roadway connecting Delancey Street to Marion Street (later renamed Cleveland Place in honor of the former President), was planned.

The new street would cut directly through the middle of existing blocks and necessitate the razing of existing buildings.  One of these was the three-story hotel at No. 15 Marion Street owned by Brooklynite real estate operator Augusta Liebertz.

When the demolition crews had finished, Augusta found that she was left with an unlikely sliver of property.

Kenmare Street was named for the birthplace in Ireland of Tammany Hall boss “Big Tim” Sullivan’s mother.  The thoroughfare would not open officially until 1911, but Augusta Liebertz would not wait that long to develop her sliver.

She had an existing relationship with the architectural firm of B. W. Berger & Son.  Augusta's now-deceased husband, Peter, had first began building in the area in the 1880s.  She continued building and operating properties and Bruno W. Berger & Son had designed her $15,000 business building nearby on Delancey Street in 1906.

She now presented the firm with a seemingly impossible site.  It was a mere 3-1/2 feet wide on Marion Street, stretching back nearly 100 feet on Kenmare where it widened to 19 feet—a narrow, pie-shaped lot.   Triangular properties were popularly called “flatirons” at the time (a name that would become permanently branded onto the famous 1902 Fuller Building on 23rd Street).  On June 20, 1908 the New-York Tribune reported on “Plans for a Little ‘Flatiron.”

The Real Estate Record & Guide reported the cost of the projected three-story loft building at $16,000—about $425,000 in 2015.  The Tribune added it “will be of ornamental brick, with large mezzanine windows on the plaza front.  The ground floor will be fitted out as a café and the upper stories as lofts.”
B. W. Berger & Sons filled the quirky plot with a rather attractive structure clad in beige brick on the upper two floors--a mix of Colonial and Classical Revival styles.  A slightly-protruding store front housed a café in the front and an auto garage in the wider, rear section.  Five sets of stacked three-sided bays projected from the façade, giving the interior space a few extra feet.  A cast metal cornice topped it off.

The building sat within what was termed the “Italian District.”  Although it was located just a block north of the newly-completed Police Headquarters, during Prohibition the immediate neighborhood was called the “whisky curb market” because of the heavy bootlegging activity of gangsters.  The ground floor restaurant would soon become a favorite haunt of Italian crime figures.

A few years earlier, in 1907, Giuseppe Alfano had been arrested and charged with extortion.    He had sent threatening letters, signed by the “Black Hand,” to junk dealer Dominick Montmarano.  According to The New York Times on August 25, Montmarano, who was threatened with death, was “induced to part with $30, as an installment of $800 demanded.”  He marked the cash before handing it off to Alfano and his accomplice, Maria Varone.  The pair had the bills on them when arrested.

Now, Giuseppe Alfano ran the restaurant in the Kenmare Street building; while The Michigan Tire & Tube Works operated in the rear section.  The café would play a major part in a gangland shooting on July 16, 1920.  Three days earlier two Italian gangsters had a violent fight over a woman in the restaurant.  It would have fatal consequences for one of them.

At 2:45 a.m. on July 16 a seven-passenger Cadillac limousine pulled up to Bellevue Hospital.  The New-York Tribune identified the passengers as “a woman who gave her name as Loretta LeRoy,” her chauffeur Wilson Jackson, and “Pasquale Dimara, an Italian.”  Also in the car was a bullet-ridden body.

The three were detained by police and Lorette LeRoy gave a simple explanation.  “In her story to the police, Miss LeRoy said that she was being driven home by her chauffeur…when they noticed the body of a man lying in front of 87 Kenmare Street.  Demira [sic] she said, was standing near the body.”

Police described the location as “a small Italian restaurant.”  Policeman Stabwitz, who had been on duty nearby, heard five shots and rushed to the scene.  The body had already been removed and the restaurant was closed.  But on the steps leading to the cellar he found two shotguns, both loaded and both recently fired.

Loretta (who was “expensively clad and wore many jewels") told police she got out of the car and Dimara told her the man had been shot and was dying.  He and Jackson loaded the man into the limo and headed to the hospital.  While she spoke, detectives were outside searching her limousine where they found a loaded 38 caliber revolver with none if its chambers fired.

The dead man had been shot five times in the chest.  He was described by police as “well-dressed, is about twenty-five years old and about five feet eight inches in height.  He wore a large diamond stud in his shirt front.”  The Tribune noted he “is believed to be a wealthy Italian.”

Further investigation revealed a guitar case in the restaurant’s basement.  And when detectives went to the address given by Loretta LeRoy, they were told that no one by that name lived there.

The following day the New-York Tribune reported that “Men of the Italian squad…began yesterday to unravel the tangled threads of the East Side feud that reached its climax yesterday morning before a dingy little restaurant at 87 Kenmare Street.”

The victim had been identified as Alfredo Grassiano who had been released from jail four months earlier.  He had served three other sentences for burglary and truck thievery.  His body was identified by his father who said “his son never came home except to extort money from his family.”

Not only was the accused assassin, Jerry Ruberto, who was known as Jerry the Wolf, arrested but so were the restaurant’s owner, Guiseppe Alfano; and the three seeming good Samaritans of the night before.  Loretta Leroy, incidentally, was really Kitty Flynn; and Pasquale Dimara was Pasquale De Fina, whose alias was Patsy Gans.  The second woman, known only as “Buster,” was missing.

Kitty, “who says she is a cabaret singer in an uptown Chinese restaurant,” changed her story.  She said she and Buster had a double date with Grassiano and De Fina.  They arrived at the restaurant and “presently, she told the police De Fina and Grassiano joined her and ‘Buster’ and chatted for a few minutes, when Grassiano said ‘It’s hot.  I want fresh air.”

Seconds later five shots rang out.  Kitty Flynn’s chauffeur said she came running out, screaming “Mike! Mike! Why did you go out?” and they loaded Grassiano into the automobile and left.  “In the confusion ‘Buster’ vanished,” reported the Tribune.

“All of the witnesses held insist that Grassiano had no enemies and none of the can think of any reason why anyone should have tried to kill him,” said the newspaper.  Jerry the Wolf “admitted having a fight with Grassiano in the restaurant three days before the killing, and admitted that Grassiano had smashed a bottle over his head.  He denied knowledge of the murder,” reported The Sun on July 18.

Jerry Ruberto had other things to contend with at the same time.  The 22-year old, convicted twice for felonious assault, was on $1,000 bail awaiting trial for firing several revolver shots from an automobile at a pedestrian on Coney Island a month earlier.

Jerry the Wolf would meet his end two years later during a shootout in the Café Venezia at the corner of Kenmare and Elizabeth Streets.  On February 24, 1922 The New York Times noted “Another name was added yesterday morning to the list of killings in the feud among bootleggers connected with the ‘whisky curb market,’ near Police Headquarters."  Jerry Ruberto’s name was added to the string of more than 30 other mob murders at the time.

By 1926 Giuseppe Alfano’s restaurant had been replaced with a cigar store owned by Julius Siebert.  It would be the cause of disappointment to Mrs. Louis Rosenberg on June 3 that year.  She and her husband, a shirt manufacturer, had planned a night at the theater.  Not long before the 8:00 curtain, Rosenberg ducked into the cigar store to telephone his wife to meet him so they could go to the theater together.

Unaware that someone was in the telephone booth in his store, Julius Siebert finished his business, closed the store, and went home.  The following day The Times wrote that Rosenberg had “two tickets for the theatre last night, but he did not use them.  Instead he spent the time that the first act was on inside of a locked cigar store at 87 Kenmare Street.”

The neighborhood had not appreciably improved by the Great Depression.  In 1939 the Works Progress Administration’s New York City Guide noted “The building of the Williamsburg and Manhattan bridges cut swathes through the close-packed dwellings,” and that recently Government housing had replaced some of the old tenements.  “But throughout most of the section the smothering heat of summer still drives East Siders to the windows and fire escapes of their ill-ventilated dwellings, to the docks along the river or to the crowded smelly streets where half-naked children cool themselves in streams from the fire hydrants.”

And change would come to Kenmare Street.  In the late 1970s a tire repair shop was still located in the back of the building; and upstairs residents were taking over the former lofts.  Street photographer Robert Herman lived in a full floor, which he described as having a “gas space heater hanging from the ceiling” and “In the winter, even with duct tape covering all the cracks in the window moldings, the Con Ed bill was higher than my $250 a month rent.”

But when Storefront for Art and Architecture art gallery took the ground level space around 1984, it heralded the beginning of the discovery of this section of Soho.  Simultaneously, the old Police Headquarters building underwent a $20 million residential conversion—home to names like Leonardo DiCaprio, Calvin Klein and Stefi Graff.

On August 22, 2010 Stefanie Cohen of the New York Post wrote “Just four blocks long, Kenmare Street was once a lonely extension of Delancey Street, home to automechanics, psychics and bodegas.  A nowhere-man’s land between Little Italy, Chinatown and SoHo.  But in the last year, the street has transformed from a sleepy thoroughfare to a strip dotted with nightclubs and fine dining, after-hours lounges and high-end eateries.” 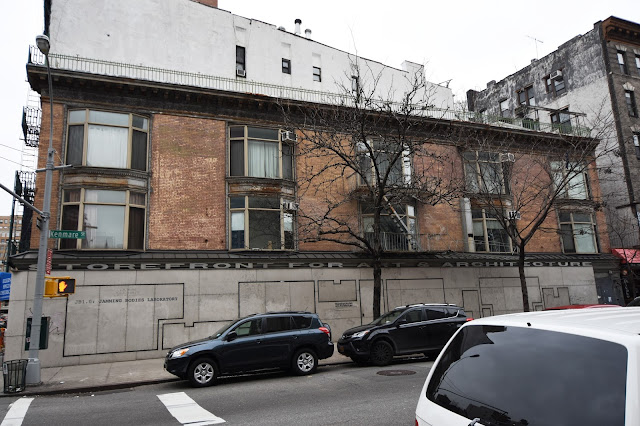 Today Augusta Liebertz’s solution to her left-over slice of property is little changed on the upper floors.  The remarkable ground floor of movable panels installed by Storefront for Art and Architecture and desiged by Stephen Holl & Vito Acconci is a work of art in itself.  The stark contrast between the two sections is a comment on the building’s drastically changed location and history.

non-credited photographs by the author
many thanks to Joanne Mariner for suggesting this post
Posted by Tom Miller at 2:58 AM