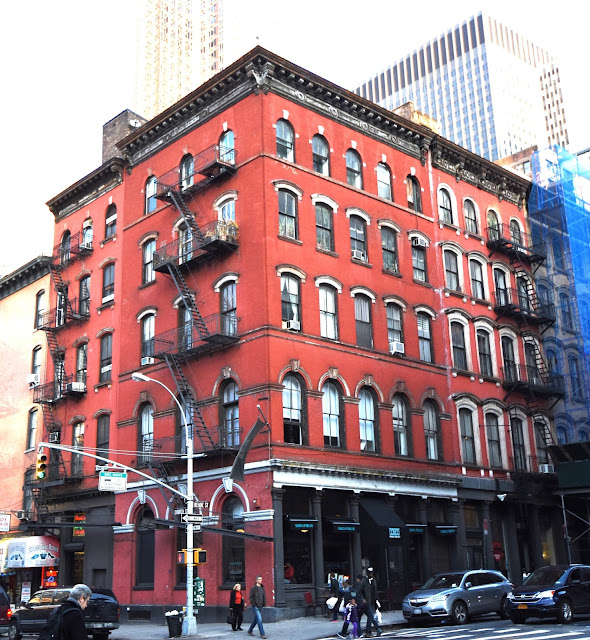 In 1860 dry goods merchant John Martin, Jr. diversified into real estate.  That year he acquired three old structures-including Kohler & Brunjes’ grocery store at No. 82 Reade Street-- at the northeast corner of Church Street, and laid plans for a rental building.  It would appear that he chose James H. Giles, who was active in the area at the time, as his architect.

The design of the Italianate-style five-story loft and store building, completed in 1861, was handsome and up-to-date.  The red brick façade was trimmed in contrasting stone.  Especially eye-catching were the second floor openings, copied at ground level on the Church Street side.  The round-headed windows here were capped by carved eyebrows with paneled keystones.

The tall cast iron storefront featured fluted Corinthian columns supporting its entablature and cast cornice.  Among the architect’s details--like delicate sill courses—was his delightful attention to the structure’s corner, which turned in rather than pointing out.

In 1865 a 23-year old German immigrant, William B. Gerslenberg, worked for William Watkins as a bookkeeper.  Perhaps because Gerslenberg had access to the company safe, another employee, Charles Smart, gave him $284 of his own money for safekeeping.  Problems for both men started when Watkins fired Gerslenberg.

The New York Times reported on December 10, 1865, “Soon after the book-keeper was discharged by Mr. Watkins, and on leaving the store carried with him Mr. Smart’s money.”  Gerslenberg was tracked down at his boarding house on North Moore Street where he was arrested.  He confessed to the theft but said he spent the money “in concert saloons and upon fast horses, &c.”

A far different type of business—the rubber goods industry—was represented in the building by the 1890s.  Although the Mack Drug Company, “dealers in patent medicines,” was still in the building in 1890 after several years here; it was also home to the Boston Rubber Shoe Co., Ford Brothers “rubber goods,” and the Home Rubber Company.

The Ford Brothers firm consisted of wealthy “india rubber merchants,” James B., John R. and J. Howard Ford.  The brothers lived together at No. 507 Fifth Avenue.  And the Home Rubber Co. would remain in the building at least until the end of World War I.

Following the death of Robert Campbell, a respected and well-liked rubber merchant, a “meeting of the boot and shoe trade” was held in the offices of the Boston Rubber Shoe Company here.  Among the motions was to “have engrossed and bound a set of appropriate resolutions to be presented to Mrs. Campbell.”

At the turn of the century the rubber goods firms were joined by a variety of businesses.  The Diebold Safe Company sold both new and second-hand safes on “easy terms” during the first years of the 1900s; W. J. Anderson & Co. dealt in “calendars and calendar pads,” and Robert J. Pierce, Inc. was described by The Sun as “a large concern dealing in drug sundries.”

In 1911 the building was joined internally with No. 78, the L-shaped structure next door that wrapped around to Church Street.

It was about this time that Robert J. Pierce’s son, Clifford A. Pierce, had taken over control of the business after he had his father declared insane.  In the 19th and early 20th century, insane asylums were not only a means of dealing with the mentally ill; they were a convenient method of getting rid of cumbersome relatives.  The problem was such that in 1891 the Lunacy Law Reform League was established.

Clifford Pierce repeatedly had his father committed, but Robert Pierce was always released.  In 1917 the elder Pierce was confined again, this time in the Bloomingdale Hospital for the Insane.   On July 21 that year, he saw his chance and slipped a note to a little girl, the daughter of Dr. and Mrs. A. I. Bernstein of Mt. Vernon.  The note pleaded for his attorney, Jacob S. Ruskin, to obtain a review of his case.

The Sun later reported that “The note was forwarded to the lawyer, a review was obtained and four physicians testified that he was sane.”  Pierce was released.  But his freedom would be short-lived.
Clifford Pierce told authorities that his father “underwent another nervous breakdown and created a disturbance.”  The elderly man was returned to Belleview, but released two weeks later on August 22, 1917.  The next day, according to Clifford, “his father came to his place of business and grew troublesome.”  The wealthy and respected old man who had established the drug firm was sent to a sanitarium in Flushing, New York, for treatment.

Also in the building about this time, along with the Home Rubber Co., were the C.P.N. Chemical Co., dealers in in 1918; and the Abrams-Radner Shoe Co., Inc. “wholesale shoes.”  Later in the century the railroad supply firm, John W. Miller Company, would be here, as well as the Good Neighbor Textile Company and the Bailey Chair & Supply Co., Inc. 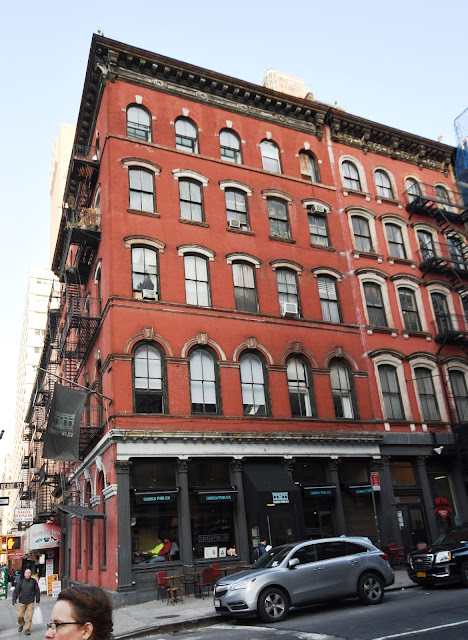 In 1993 the upper floors were converted to apartments and today the ground floor is home to a trendy restaurant.   John Martin Jr.’s venture into real estate development is astonishingly little changed after a century and a half.