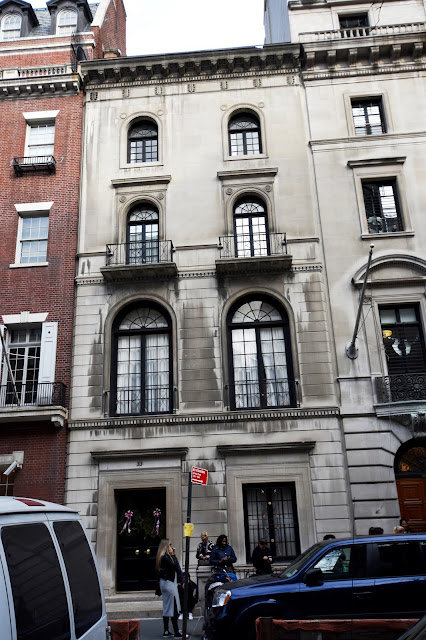 In the first years of the 20th century the Upper East Side brownstones from the 1870s off Central Park were an endangered species.  Many wealthy New Yorkers who bought up the old rowhouses either dramatically altered them into up-to-date mansions, or razed them and started from scratch.

Two of these were James Harper Poor and his brother, Charles Lane Poor.  The men had briefly been partners in J. Harper Poor & Co., a dry goods commission firm, from 1900 to 1903.  But Charles, who was a well-known astronomer and scientist, moved on to other endeavors.  The split in their business relationship did not weaken their close family ties and in 1910 they planned side-by-side mansions.

The men purchased property on the site of the demolished Union Theological Seminary.  James Harper Poor acquired No. 33, while Charles bought No. 35.  Interestingly, they chose different architects—J. Harper hiring the firm of Howells & Stokes; while his brother commissioned Walker & Gillette.

Construction was completed two years later.  The limestone-clad, neo-French Classic mansion rose four stories.   Each of the pairs of narrow, multipaned windows at the second floor was unified by a large arch and decorative balustrade.  At the third floor, two stone balconies fronted sets of arched French doors set within carved enframements.

The architects dealt with with their clients' wishes for "large light rooms, foyers and impressive stair treatments," according to critic M. B. Stapley, on a lot between two other row houses.  The Brickbuilder explained "The solution in this case was to build the house around a patio, Spanish fashion, which patio practically divides it in two laterally, with the staircase and hall as connecting link between front and rear portions."  The glass ceiling of the "patio" flooded the interior rooms with light.


The 50-year Poor was married to the former Evelyn Bolton.  Moving in to the new house with them was daughter Mildred; and daughter Evelyn and her husband Philip Parkhurst Gardiner.

But despite his extensive wealth, it appeared Poor overextended himself.  On April 10, 1914 The Sun reported that the Union Theological Seminary had filed suit “against J. Harper Poor to foreclose two mortgages on the latter’s residence at 33 East Sixty-ninth street.”  The outstanding mortgage was $150,000—over $3.6 million in 2015 dollars.

Seven months later The New York Times announced that Poor had sold the mansion.  In reporting on the sale, the newspaper noted it “is one of the newest of the fine houses lately erected in the Lenox Hill section.”

As partial payment for the residence, Carl D. Jackson gave J. Harper Poor a vacant plot at No. 2 East 89th Street on which he had intended to build his own home.  The highly-desirable lot abutted the Fifth Avenue mansion of Benjamin N. Duke.

Jackson was the principal of C. D. Jackson & Co., which manufactured stone blocks, marble tiles and other interior building trim.   It appears he leased the 69th Street house to Poor while a new residence was being constructed.   When Mildred Poor married Dr. Alexander Y. P. Garnett of Washington on June 12, 1915, the family was still using the 69th Street address.

Mildred was still studying at Vassar at the time of the summer wedding.  It took place at the Poor’s country estate, As You Like It, at Easthampton, Long Island.   One month later her sister, Evelyn, died in that house.

The 69th Street residence became home to the Elisha Walker family in the 1920s.   Walker was educated at Yale and the Massachusetts Institute of Technology.  In 1920 he became president of Blair & Co.  He and his wife, the former Adele d’Orn, had four sons, Robert, Louis, Elisha Jr., and Bayard, and a daughter, Adele.

The Walkers were highly visible in society, financial, and philanthropic circles.   Their 26-room summer estate in Syosett, New York, was named Les Pommiers, and they maintained another country home in Morristown, New Jersey.

Adele’s formal introduction to society occurred at a ball at Sherry’s on December 18, 1915.  But, as with most debutantes, that was not the end of the entertainments.  In February 1926 the Walkers hosted a dinner for Adele in Morristown; and on New Year’s Eve they gave a “large dance” in the 69th Street mansion.

Devoutly Catholic, Mrs. Walker was highly involved in church charities and activities.  On February 6, 1928, for instance, the Walker house was the scene of a lecture by the Rev. Cornelius Clifford who spoke on “The Vatican and National Allegiance.”  His political bent was evident when he referred to Governor Al Smith as “the greatest and most typical American since the time of Lincoln” and said that refusing to recognize the politician’s merits was a “sinister and most un-American gesture.”

A month after Elisha Walker was created a Knight of the Order of Malta in January 1930, he became Chairman of the Board of Transamerica Corporation.  It was the beginning of a stormy relationship as Walker battled with directors during the stressful Depression conditions.

On the night of September 21, 1931 the Walkers entertained a couple for dinner at their Long Island mansion.  The guests left fairly early and Adele Walker removed her jewelry, placing it in her jewel case as usual.

Adele Walker rose the following morning to notice a diamond ring on the floor.  She rushed to her jewel case and found that it had been rifled.  A quick inventory revealed that several pieces were missing, including a $30,000 pearl necklace, a $10,000 diamond bracelet and another necklace valued at $4,000.

Detective Sergeant Farrell of the Nassau County police inspected every room and window of the house, and decided that the theft was “an inside job.”  There was no evidence of forced doors or windows.  The Walkers vehemently defended their staff.   Most of the servants, they protested, had been in their employ either on Long Island or Manhattan for several years “and were considered above suspicion.”

Despite Elisha Walker’s difficulties at Transamerica Corporation, the glittering entertainments in his domestic life continued.  On January 31, 1932 the Walkers gave a dinner for the French Ambassador and Madame Paul Claudel.  Others on the impressive guest list included the Clarence H. Mackays, and Mr. and Mrs. Charles E. Mitchell.

The following month Walker resigned from Transamerica, becoming a partner in Kuhn, Loeb & Co. in 1933.  He was at the time a director of seven corporations, Chairman of the Board of Beekman-Downtown Hospital, a member of the Council on Foreign Relations, and a director of the Boys’ Clubs of America.

The 69th Street house continued to be the venue of receptions and teas for charitable causes, and dances and dinners.   Adele's many benefit entertainments were for such causes as the Hospital for Cancer and Allied Diseases and the Catholic Big Sisters of the Ladies of Charity.

Elisha Walker died in his Long Island home on November 8, 1950.   The 69th Street mansion was sold in June the following year to Sherman Billingsley, founder and operator of the famous Stork Club.  Billingsley was a Manhattan character—a former bootlegger who had spent time in Leavenworth Prison.

Just before 1:00 on the afternoon of June 11, 1957 six house painters working in the Austrian Consulate General next door at No. 31 East 69th Street were taking a break, resting on the steps of No. 33.  Billingsley noticed them, and ordered them to leave.  He said his daughter was due home from school soon and might be frightened.

When the men did not move, Billingsley reappeared brandishing a handgun.  This time they responded.  But they also complained to the police and Billingsley was arrested at around 10:45 that evening.  The New York Times noted “He surrendered three pistols and said a fourth one he owned had been lost.”

Billingsley’s attorney, Roy Cohn, complained the arrest was the result of union intimidation over a labor dispute.

The house became home to entertainment attorney and chairman of United Artists Arthur B. Krim and his wife, research scientist Dr. Mathilde Galland Krim, by the early 1960s.  The couple had married in 1958.  Long prominent in the Democratic Party circles, Krim was by now chairman of the Finance Committee of the Democratic National Party.  He would be adviser to Presidents John F. Kennedy, Lyndon Johnson and Jimmy Carter.

The 69th Street house would have its greatest moment in the national spotlight on Saturday night, May 19, 1962.  On that night the nation watched as President Kennedy was given a huge birthday party fundraiser at Madison Square Garden.  Following the event, a select number of guests went secretly to the Krim residence for a continuation of the party.  Sipping cocktails that evening, along with the President and First Lady, the Robert Kennedys and the Lyndon Johnsons, was Marilyn Monroe, still wearing the slinky evening dress she wore to sing “Happy Birthday Mr. President” earlier.

The Krim mansion would see a string of prominent guests.  Among Arthur Krim’s close friends were Adlai E. Stevenson, Associate Supreme Court Justice William J. Brennan, and James P. Mitchell, former Labor Secretary during the Eisenhower Administration.  On April 7, 1977 Walter Mondale was here for a fund raiser for Jimmy Carter; and President Carter himself was here the following year on November 2.

Mathilde Krim was recognized in her own right as a research scientist at the Sloan-Kettering Institute for Cancer Research.  Following the first recognized cases of AIDS in 1981, she dedicated herself to increasing public awareness of the epidemic and, with Elizabeth Taylor, founded the American Foundation for AIDS Research.

The Krims were highly involved in the American civil rights movement, the gay rights movement and other civil liberties and human rights causes.  Arthur B. Krim died on September 21, 1994 at the age of 84. 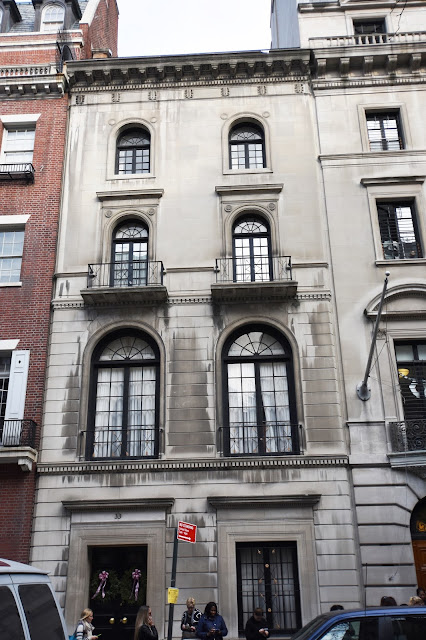 The James Harper Poor house has suffered some unfortunate alterations over the years.  The lovely stone balconies have been removed, as have the balustrades at the second floor.  The robust iron gates to the basement level have been replaced with common fencing.  But overall the mansion retains the elegant appearance of the first decade of the 20th century when the block was seeing remarkable change.

photographs by the author
Posted by Tom Miller at 4:11 AM