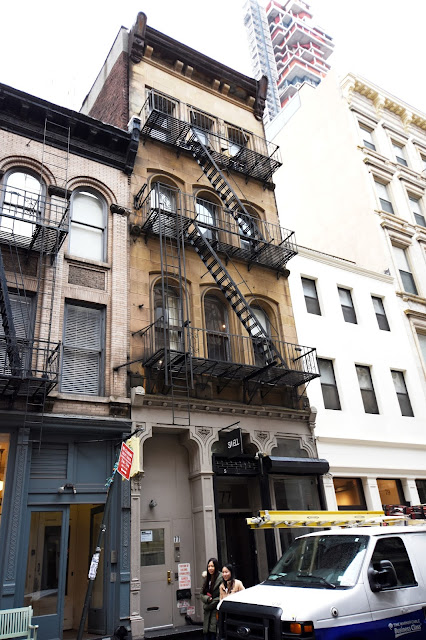 Two year old Eugene Bunch died in the Federal-style house at No. 77 Franklin Street on February 28, 1852.   His parents, attorney David and his wife Henrietta, had already lost their first son, David, who died on September 7, 1843 at the age of 3 years and 10 months.  By the time daughter Josephine married Dr. A. S. Greene of Indiana on February 12, 1862, the neighborhood was drastically changing.

The Bunces moved to Brooklyn shortly afterward.  Their Franklin Street block was already seeing familiar brick homes replaced by commercial structures.  And in 1864 the Bunce house, too, would become a victim of progress.

The Roman Catholic Orphan Asylum, located far north on Fifth Avenue, owned the property.   It razed the house and began construction that year of a substantial four-story loft and store building.  Completed in 1865, the investment property was eye-catching in its unusual architectural elements.

The architect, whose name has been lost, sat three stories of sandstone on a highly unusual cast iron storefront.  The deeply-recessed arches smacked of Moorish Revival.  The arched openings of the upper floors were also deeply set, surrounded by heavy inscribed enframements. 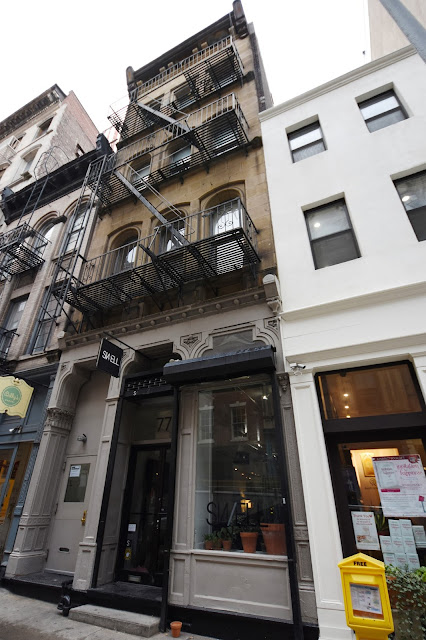 The Roman Catholic Orphan Asylum rather quickly sold the new structure to Isaac Rich.  It filled with firms associated with the dry goods industry that had engulfed the area.  In 1875 Walter Brown & Son was in the building and that year proudly announced they were “now agents for the Gloucester, Mohawk, and Wamee ginghams.”  Also here was Schwab & Williams’ neckwear factory, whose store was across the street at No. 82 Franklin Street.  On December 21, 1877 the firm advertised in The Sun:  “Wanted—Experienced embroiderers on crepe lisse; no work given out.”  (The admonishment referred to the practice of “piece work;” whereby women would work on goods at home.)  The following year the firm was seeking experienced “bow and scarf hands.”

Another tenant at the time was B. C. Smith, manufacturers of suspenders.  Their apparent success had them searching for “first-class operators and binders on suspenders” in June 1881 and a foreman six months later.

Around the turn of the century the Lowell, Massachusetts-based Hamilton Mills established its New York office here.  Other out-of-town firms to open offices in the building included the New Orleans concern Florsheim Bros. Dry Goods Company, Ltd.; and the Martin Brown Company of Forth Worth.

By 1912 the A. W. Baylis commission house was headquartered here.  On Friday night, March 29 that year two of the firm’s traveling salesmen, 32-year old Robert Johnston and Thomas Malcom, were involved in an unusual and tragic incident.

The pair was scheduled to leave on a trip to the West the next Monday.  They met at the Cosmopolitan Hotel where they played pool until just before midnight.  The men boarded an uptown train and when they reached 42nd Street, decided to go to the Fleischman’s Baths, nearby on Sixth Avenue.  They disembarked the elevated train around 12:15 and headed down the stairs to the street.

The New York Times later reported “they had scarcely reached the bottom of the stairway when two young men and two young women came along.  Johnston,  [Malcom] said, glanced at one of the women, and that started the trouble.”

The women’s escorts took offense to Johnston’s glance.  Malcom told police “For a minute it was a battle of words and then the fight started.  One of the men attacked me, and I had my hands full for the time.  When I had driven him away I looked around.  Johnston was sitting on the curb.  He got up, wiped the blood from his face, and laughed.”

Somewhat humiliated, the salesmen hurried off to the baths and went to sleep.  Around 3:00 Malcom took a bath and an attendant aroused Johnston; but he said he needed to sleep a few hours more.  When William Quinn, a masseur, came to Johnston after 7:00 a.m., he was sent away, Johnston telling him he needed more sleep.

Two and a half hours later Quinn checked on him.  Johnston’s breathing seemed labored and he summoned Dr. Max Gottfried.  “Dr. Gottfried said he saw at once that Johnston had symptoms which indicated a fracture of the skull, and he called Dr. Joseph Muir, who has an office in the building,” said The Times.

By the time Johnston’s father and brother arrived at the baths around noon, he had succumbed.  The Coroner held little hope in finding the men responsible.  “There seems to be a very slim chance of finding his assailants, as we have poor descriptions, and it’s a pretty hard job to pick two men out of a million when all you know about them is that they are about five feet six inches tall and dark…I doubt if they know now that any one was killed.”

Somewhat callously, reporters asked Johnston’s father to comment.  “My boy is dead.  What else can I tell you,” he responded.

Throughout most of the 20th century the building continued to house dry goods-related firms.  Then in the 1970s the Tribeca neighborhood underwent transformation as former lofts were converted to residential space and galleries, restaurants and trendy shops took over the ground floors.   The upper floors of No. 77 Franklin Street were converted to artists’ studio and living spaces.

In 1974 William S. Burroughs moved onto the fourth floor.  The multi-talented Beat Generation figure was a novelist, essayist, artist, and short story writer. 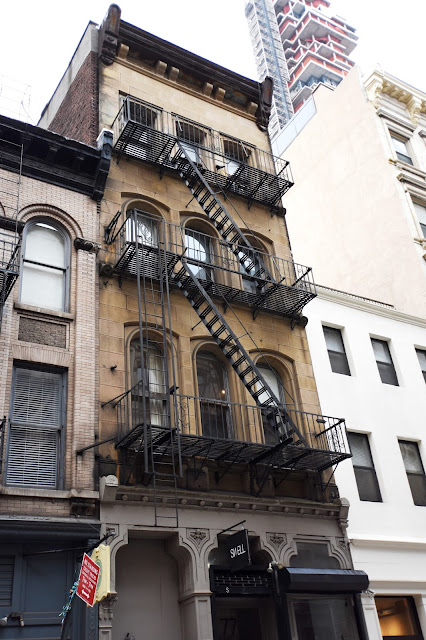 Although an early 20th century fire escape interrupts the stone façade and a gruesome industrial doorway to the upper floors replaced the original; No. 77 Franklin Street survives highly intact—including the mesmerizing cast iron base.