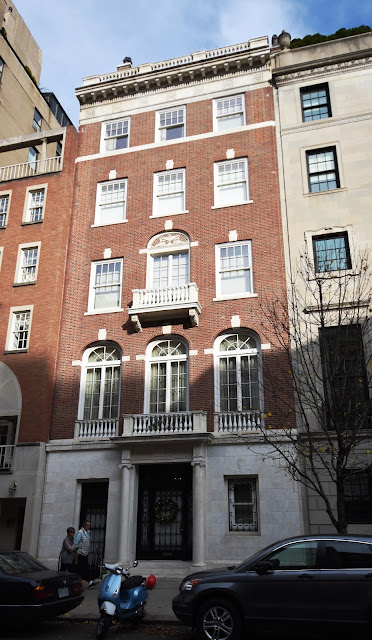 In 1913 the Dalley family had lived in the four-story brownstone rowhouse at No. 9 east 69th Street, between Fifth and Madison Avenues, for about a decade.  Built in 1885, it was originally owned by David Dows, Jr. and the price he paid, $95,000, reflected the high-tone status of the block.

Henry Dalley was a partner in the perfume manufacturing firm of Lazell, Dalley & Co.  He had amassed a fortune and he and his wife were deemed by The New York Times “of social prominence.”  On Monday, February 24, 1913 Henry’s wife, Evelyn Maynard Dalley, died in their 69th Street home.  Within the year Henry Dalley would move out.

In May 1914 The Bowery Savings Bank won the house at auction with a bid of $105,000--$45,000 less than the city’s assessment.  It resold the property to insurance executive and financier Edwin Cornell Jameson within two weeks; The New York Times commenting on May 12 “It is understood that the buyer will raze the present structure, and erect a modern dwelling.”

Many wealthy New Yorkers who bought outdated homes in enviable neighborhoods at the time either razed or radically remodeled them.  The old high-stoop brownstones emerged as modern, Edwardian mansions.  The Jamesons joined the trend.

The 50-year old Jameson was President of the Globe-Rutgers Fire Insurance Company.  Four years earlier he had married Mary Burchell Gardner in a fashionable St. Thomas’s Church ceremony.  But the couple did not rush into their project—it would not be until July 17, 1915 that their choice of architects, Grosvenor Atterbury, was announced.

In November, as the foundation for the new mansion was nearing completion, Edwin and Mary leased the newly-built home of Colonel Robert M. Thompson, almost directly across the street at No. 3 East 69th Street.

Their permanent home would not be completed until 1917, but it was worth the wait.  At a cost of $60,000 (about $1.1 million in 2015), Atterbury had produced a six-story neo-Federal mansion.  The entrance within the marble base was flanked by engaged Ionic columns that supported a second-story balcony.   Here three tall and elegant windows were capped by fanlights and double keystones.   Each succeeding floor was less ornamented, climaxing with a handsome balustraded parapet that hid the sixth floor from street view.

Births of babies in well-to-do families took place at home, as such was the case when a daughter, Mary, arrived in the Jameson house in December 1918.

The Jamesons maintained a summer estate, Flying Point, in Southampton.  Typical of their entertainments was a “beach supper party” on August 28, 1921, in honor of house guests from Middleburg, Virginia.

During the war Mary had been highly involved in the Soldiers’and Sailors’ Club.  Soon after the infant’s birth she returned to her charitable cause.

As the servicemen returned home, the Club’s managers turned their focus to rehabilitation and employment.  On March 10, 1921 Mary Jameson hosted a meeting “to plan for special work for the disabled soldiers.”  Within the past month the club had placed 700 veterans in new jobs.  The impressive stature of the committee members was evidenced by the names of the speakers that afternoon: Mrs. Vanderbilt Webb, Mrs. Francis Rogers, Miss Mabel Beardsley and Mrs. Arthur Terry.

Edwin Jameson would find himself embroiled in scandal and intrigue when he befriended politically-powerful Methodist Bishop James Cannon, Jr.  Cannon was a vehement Prohibition supporter.  His influence became so far-reaching that journalist H. L. Mencken said he was “the undisputed boss of the United States.  Congress was his troop of Boy Scouts, and Presidents trembled whenever his name was mentioned.”

When the Democratic Convention chose anti-Prohibition leader Alfred E. Smith as its candidate in 1928, Cannon was outraged.  He helped form the Anti-Smith Democratic movement; and he lobbied Edwin C. Jameson’s financial assistance.

But Cannon’s unethical methods caught up with him and on May 7, 1930 Jameson found himself testifying before a Senate committee.  The Chicago Tribune reported on Jameson’s humiliating confessions on the stand that same afternoon.

“Edwin C. Jameson, New York financier, today admitted to the senate lobby committee that at the dictation of Bishop James Cannon Jr., militant dry leader of the Methodist church, South, he included in his report of contributions to the Hoover campaign fund a total of $7,300 paid to the Bishop after the election as ‘gifts’ to wipe out some of the bishop’s personal debts.

“Jameson frankly conceded it may have been improper to list the ‘gifts' for Cannon as part of the $95,300 which he reported as his total contribution to the successful anti-Smith campaign in Virginia.  Of that total $45,300…went to Cannon.”

Jameson weathered the scandal and things returned to normal on East 69th Street.   The two children, Mary and Edwin Jr. (known as Ted), were growing up.  In 1937 Mary was a student at Bennington College in Vermont, having spent her earlier years in private schools.  On November 24 that year her parents hosted a dance--the first of her debutante entertainments—in the house.

Another debutante that year was Helen Vaughan Kiendl.  A year later her engagement to Ted Jameson was announced, and in April 1939 they were married in the Church of the Heavenly Rest.  The New York Times society page deemed it a “wedding of much interest.”

As world war erupted in Europe, Mary Jameson once again turned her attention to war relief.  In 1940 she established the American Branch Headquarters of the Mobile Surgical Unit for War Relief to France.  The group provided surgical supplies and funds to the medical corps treating soldiers.  When the United States entered the war, Ted served as an Air Force pilot.

Edwin Cornell Jameson died at his country home in 1945 at the age of 81.  Mary remained in the 69th Street mansion for a time; and then in 1954 the National Council of Jewish Women purchased it for its headquarters.

A renovation that year turned the elegant interiors into offices.  The headquarters officially opened on June 22, 1954.  From here the National Council of Jewish Women coordinated social programs such as the Service for Foreign Born; the Council Day Camp that served youngsters from the East Bronx; and the Child Development Center for disturbed children. 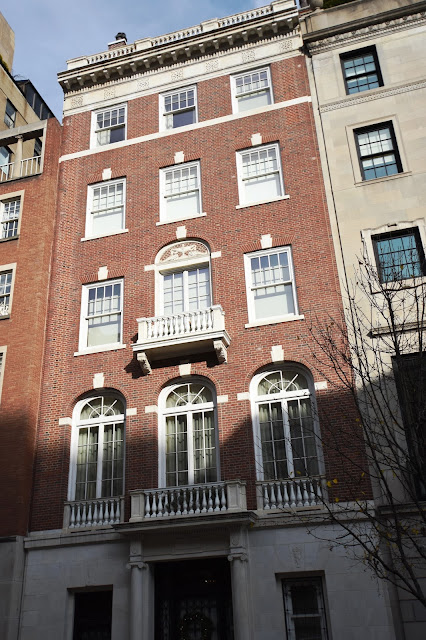 The Council put the mansion on the market in 2006 for $25 million.  It was subsequently re-converted to a single family home.   The refined façade of the Jameson home survives beautifully intact.