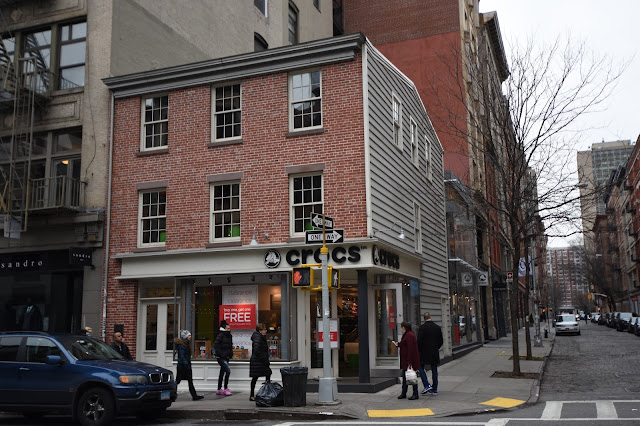 The block of Spring Street, between Wooster Street and Laurens Street (later renamed West Broadway) saw a flurry of construction in 1818.  Around that year the entire south side of the block was developed with Federal-style homes.  And Josiah Purdy erected his three-story frame house with brick front at the northwest corner of Spring and Wooster at the same time.

Spring Street was originally Brannon Street—named for the man whose garden or orchard had been here.  It ran essentially east-to-west providing a route to British General Abraham Mortimer’s lavish country estate, Richmond Hill, near Greenwich Village.  But the street was renamed for the spring which supplied drinking water to the residents.

Most likely Purdy’s house at No. 143 always had a store on the ground floor.  The residents who lived on the upper floors throughout the coming years would always be working-class.

By 1844 it was home to veteran “tinner” Asa W. Hall and his wife, Elizabeth.   Elizabeth M. Hall was significantly younger than her husband.  He was 46, she just 25 years old.

Tinners were important figures in the construction trade since most structures at the time were constructed with tin roofs.  But the rooftop work came with danger.  On the morning of December 9, 1844 at around 9:00, Hall climbed the ladder of the house being constructed at corner of Prince and Laurens Street. Tragedy would soon follow.

Nineteenth century homes had “scuttles” built into their roofs; trap doors that provided access from below and, too often, access from above by burglars.  Hall was apparently distracted this morning and did not see the open scuttle.  The New-York Daily Tribune reported that he had gone to the roof “to put the tin thereon, when he accidentally fell through the scuttle in the roof to the cellar, a distance of some 50 feet, and died a few minutes thereafter.”

Fellow workers explained to the coroner that Hall “was attending to some workmen” when he “incautiously stepped backward and fell through the scuttle into the cellar.”

Less than four months later his young, broken-hearted widow died in the Spring Street House.  Her uncle, William Witzel, oversaw her funeral arrangements in the house at 4:30 on the afternoon of April 5, 1845.

By the early 1870s what was described by the Real Estate Record & Builders’ Guide as a “one-story frame store” had been added to the rear with the address of 93 Wooster Street.  A saloon was in the ground floor of the house itself.  Patrick Maher ran the store, and in 1874 James Cassin took over operation of the saloon from J. E. Dowling.  Cassin also ran a saloon at No. 755 Fourth Avenue.

On February 6, 1875 Blanche Martin strolled into Maher’s store.  When the shopkeeper turned his back, she “snatched $100 in bills from the money-drawer,” according to The New York Times.  Patrick Maher was faster than Blanche (described by The Times as “a colored woman”) and she was arrested before she could escape the store.   There was little hope she could make bail, set by Justice Otterbourg at $1,500—in the neighborhood of $33,500 in 2016.

Blanche’s trial was held on February 18 and did not end well for the woman.  She was found guilty of grand larceny and sentenced to three years in State Prison.

By 1881 H. Hotje had taken over the saloon.  For decades the Hotje family name had appeared throughout the city in various liquor businesses.  John F. Holtje, for instance, ran a saloon at No. 1 Whitehall Street in 1860.  According to Bonfort’s Wine and Spirit Circular in 1883, the name of the Spring Street business was changed to the “H. Holtje Saloon.”

In April 1882 Henry Rowe spent $20,000 to purchase the old house, the store, and a five-story brick store and tenement abutting at No. 95 Wooster.  At the time Dr. F. Eliseo Marini practiced medicine from the upper floors of No. 143.  But two complaints against him that year raised the attention of Dr. Frederic R. Sturgis, president of the County Medical Society.

Sturgis looked into Marini’s practice and discovered he had no license.  Calling him a “so-called doctor,” the Homoeopathic Journal of Obstretics, Gynaecology and Pediatrics reported that he had been found guilty “after a protracted trial” and fined $50.

Apparently Marini remedied the licensing problem; for he was practicing again two years later.  In June that year he married and the newlyweds were living at No. 117 West Broadway.  His new wife was insecure and jealous—The New York Times called her “prepossessing"—and when the doctor was called to Hoboken around midnight on Tuesday, September 2, 1884, Maria Marini accused him of seeing another woman.

“She had been married to the Doctor only four months,” said The Times, “and was troubled with hysterical convulsions.”   When Marini insisted he was obligated to go, Maria rushed from the room and swallowed carbolic acid from a medicine case.

She came back into the room and breathed into her husband’s face, to show him what his infidelity had caused.   The New York Times reported “The doctor hastened to call some of the neighbors.  The landlady, Mrs. Brosher, found Mrs. Marini with a pen in her hand.  On a piece of paper, were written the words: ‘I have killed myself.’  She was removed to St. Vincent’s Hospital, where she died.”

In the meantime, H. Holtje’s saloon was doing well enough that he had purchased the building from Henry Rowe.  In 1883 The City Record showed that Holtje had paid $75 for his renewed liquor license; but he apparently died that same year.

On July 21, 1883 the Real Estate Record reported that Holtje’s estate had sold the property to Owen Jones for $28,000.  Within a decade Jones, too, died.  And by now the corner property had risen dramatically in value.  In 1893 Jones’s heirs reportedly turned down a $60,000 offer.  When they finally sold it to Mandlebaum & Lewine in June 1895, the various rental spaces—the store, the saloon, the tenement at No. 95 Wooster, and the rooms on the upper floors of the house—were bringing in $2,900 a year (about $7,000 a month today).

W. J. Kennedy had been running the saloon, backed by the Elias Brewing Company, at least until 1891; but in 1898 the liquor license was held by John F. Esselman.

In 1907 Henry Steffens had a small trucking business in the old store.  On March 15 that year his driver, Charles Cozzal, was taking a “heavily laden truck” over the Williamsburg Bridge when his team of horses spooked and ran.  As the team dashed toward the Brooklyn side, the truck collided with several other vehicles; but caused little damaged.

The Williamsburg Bridge, opened only four years earlier, included large “runaway gates” which were installed with such incidents in mind.  Policemen closed the gate “and then awaited the crash,” according to The Sun the following day.

The team struck the gate with such force that it was blown open, knocking Policeman Guy Cobough 12 feet onto the Brooklyn Rapid Transit Company’s eastbound tracks.  Cobough was stunned, unable to move as a Franklin Avenue train approached.  “Before the motorman could check its speed the policeman was struck and pushed along for several yards.  He escaped with a dislocation of the left arm and a few slight contusions.”

Charles Cozzal had been thrown over the gate and suffered injuries of the face and head.  The horses were not so fortunate.  One was killed in the collision and the other had to be put down.

The story of an upstairs resident in 1926 was not only bizarre, but disturbing.  Rudolph Raymondi took a “small room” here in 1924.  He had come from Italy and made his living as a clerk.  His purpose for immigrating was unusual at best.

The then 27-year old noticed a Red Cross poster in Rome in 1923.  He told officials later he “fell in love with the vision of loveliness it held.”  He became determined to find the beauty who posed as the nurse and marry her.

Ramondi tracked down the artist, who told him he didn’t remember the woman’s name; but that she had left for America shortly after posing for the poster.  The infatuated man boarded a ship as soon as he raised the steamer fare.  The Times later reported “For two years he scanned billboards, posters, photographs in the magazines and newspapers, and the faces of the girls who tripped Fifth Avenue and Broadway.”

And then, seemingly against all odds, Ramondi saw a picture in a Fifth Avenue photographer’s window.  It was his dream woman.  He went inside and demanded to know her name and address and the photographer irresponsibly supplied it.

Helen Lewis lived on Burke Avenue in the Bronx.  She was, incidentally, Mrs. Helen Lewis.  The love-struck Italian began an onslaught of telephone calls.  “The young woman was not cordial,” noted The Times.

Finally Helen went to the police.  Detectives instructed her to agree to meet Romandi.  On January 17, 1926 he went to the spot.  “Raymondi kept the tryst and his arrest followed,” reported the newspaper.  It noted he was “charged with annoying the girl of his dreams.”

The days of the saloon came to an end in 1950 when the ground floor was converted to a restaurant and kitchen.  In 1978 it was renovated again to a restaurant and “drinking establishment” that spanned the first and second floors.  Tennessee Mountain would remain a Soho destination for decades. 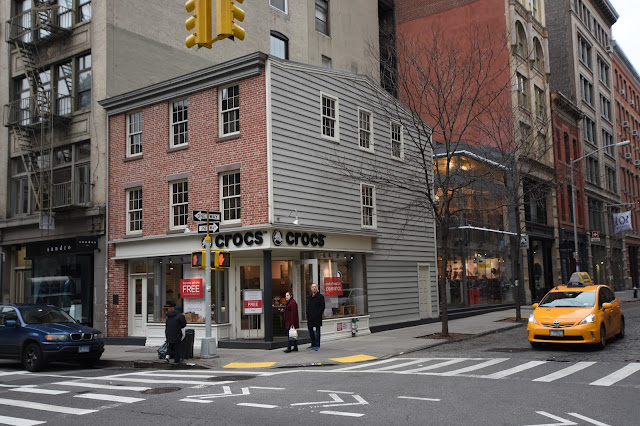 In 2006 architect William J. Rockwell embarked on what was called “part restoration, part renovation” to transform No. 143 Spring Street into a modern retail establishment.  Although Patrick Maher’s old store building was lost in the project, the resulting appearance was as historically faithful to the structure’s varied history as possible.