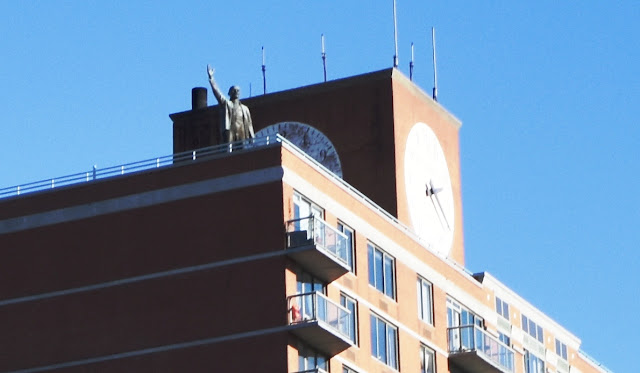 In the 1980s Soviet sculptor Yuri Gerasimov received what must have been a gratifying commission—the order for larger-than-life bronze statue of Vladimir Ilyich Lenin from the USSR Government.  A personality cult had been built around Lenin—one that depicted him as the champion of the working people.   It was a portrait that ignored his dictatorship and human rights abuses.  The memorial statue would depict Lenin as a triumphant yet charismatic leader.

Exactly where Yuri Gerasimov came from and what he had accomplished is unclear.  An obviously accomplished artist, there is little (or no) record of his other works.  Nevertheless, as the decade drew to a close, his 18-foot statue was cast.   Gerasimov’s Lenin stood slightly astride, his left foot a step behind his right.  Staring out at an invisible throng, his left arm hung to his side, its fist tightly clenched.  His right arm stretched into the air, the hand opened in a gesture of greeting.

But the impressive statue would never be unveiled; it would never be put in place.  At 7:32 p.m. on the evening of December 26, 1991 the Soviet flag was lowered for the last time in Red Square.  The Soviet Union had collapsed.

Across the former U.S.S.R. citizens of its now-independent countries attacked their Lenin monuments and statues.  In the Ukraine alone, more than 100 statues to the leader were destroyed.  Gerasmiov’s work was removed to a country home—or dacha—where it was placed in the rear yard.

In the meantime, former New York University sociology professor Michael Rosen and his partner, Michael Shaoul, were embarking on a real estate project in Manhattan’s East Village.   In 1989, about the time the Lenin statue was headed to the foundry, they began construction on an upscale apartment building at No. 250 Houston Street, between Avenues A. and B.

The historic neighborhood had undergone a variety of incarnations in 400 years.  In the early 17th century it was undeveloped and rural, sitting less than a mile south of Peter Stuyvesant’s 62-acre “farm,” or Bouwerie.   In the 1820s and ‘30s Federal-style brick homes appeared along the newly-cut streets; and by the end of that century tenement buildings were crowded with immigrant families.  The East Village became the icon of the 20th century Beatnik movement; later becoming the center of Manhattan’s counterculture—the birthplace of punk rock and the Nuyorican literary movement.

Rosen and Shaoul’s blocky red brick building was dubbed Red Square as a comment on the changing political conditions in Eastern Europe.  They intended their apartment house to be, in keeping with the neighborhood, just a bit quirky while reflecting the artistic East Village tone.   Completed in 1991, the 13-story building included a sculpture by Johnny Swing, sidewalk patterns executed by Ken Hatsukara, and sculptural lobby panels by Julie Dermansky.  Hiding the water tower was a large clock with its numbers out of order.  A huge, functional work of art, it is based on the 1984 watch by Tibor Kalman, founder of M&Co, in the collection of the Museum of Modern Art.

But Rosen had one other detail in mind.  He wanted a statue of Vladimir Lenin for Red Square’s rooftop.   When the art firm of WUM, with locations in both Manhattan and Russia, approached him regarding an investment, he included the condition of acquiring a Lenin statue.  And they did.

The three partners located the Gerasimov statue in the dacha yard.   The bronze Lenin was brought to New York and installed on the top of Red Square.  In what could be purposeful symbolism, the former leader of the Communist state looks to the south, his arm hailing Wall Street, the symbol of Capitalism.

In a city of hundreds of monuments, fountains and statues, the figure of Vladimir Lenin in the East Village could be the least expected.