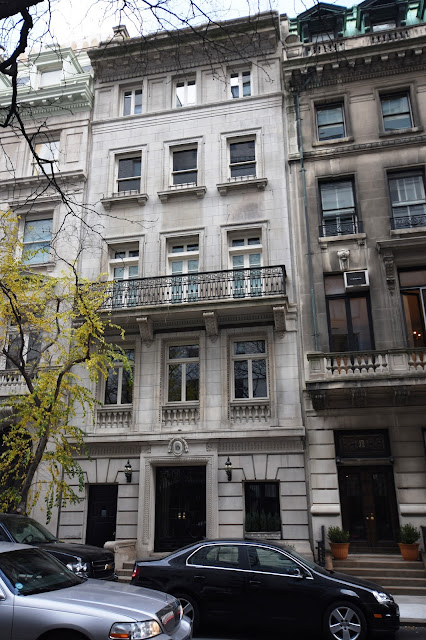 On January 9, 1910 The New York Times advised “The finest residential block in Manhattan is now in process of development from Fifth to Madison Avenue, between Seventieth and Seventy-First Streets.  This is the Lenox Library block, which in less than three years has undergone a complete transformation.”

The newspaper reported on the coming demolition of James Lenox’s magnificent library building and opined that if James Lenox were alive “he would see the great open field in the rear that has been a familiar sight for many years to every passenger traveling on the Madison Avenue cars being filled up with a number of the most elegant types of private dwellings to be found in this country.”

One of the “most elegant types of private dwellings” that was nearing completion was the home of John Chandler Moore at No. 15 East 70th Street.   Moore and his wife, the former Corinne de Bebian, had commissioned Charles I. Berg of the architectural firm of Cady, Berg & See to design their new home.

Moore was President of Tiffany & Co. jewelers; a Moore-Tiffany relationship that stretched back to the first half of the 19th century.  Moore’s grandfather, also named John Chandler Moore, established his silver making business in 1832.  His exquisite pieces were made for the top-end retailers most notably Marquand & Co. and their successors, Ball, Tompkins & Black.  But in 1851 he signed an exclusive agreement with Tiffany.

It was his son, Edwin C. Moore (the father of the present John Chandler Moore) whose creations became the face and personality of Tiffany & Co.  He was called “easily the foremost silversmith in the United States” by The Illustrated American. John Chandler Moore became associated with Tiffany & Co. in 1880 and became its President in 1907, two years before construction began on the 70th Street mansion.

Berg had produced a magnificent limestone-clad Beaux Arts-style home for the Moores.  Five stories high, its entrance was centered within the rusticated base, below a carved cartouche that announced the address. 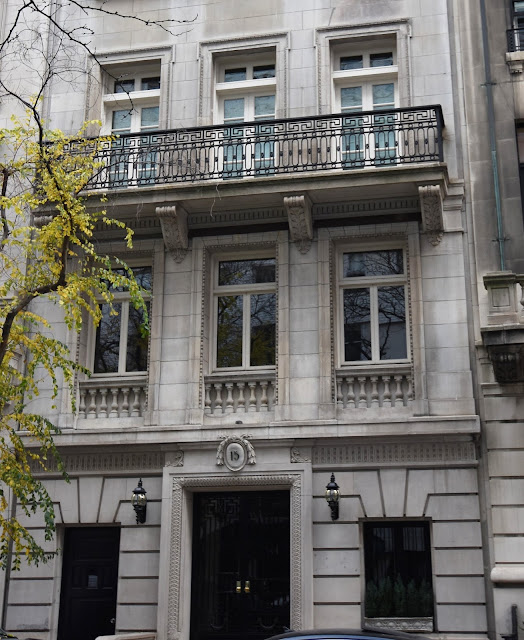 While some French-inspired mansions along Fifth Avenue and its side streets dripped with garlands and other ornamentation; the Moore house was restrained in its decoration.  Even the ordered iron railing of the third floor balcony resisted the temptation of excess.

John and Corinne had one son, Louis de Bebian Moore.  The Moore family maintained a summer estate in Oyster Bay Cove, Long Island, “Moorelands.”  The mansion there was also designed by Charles Berg.

A year after the family moved into the 70th Street home, the engagement of Louis was announced on New Year’s Eve, 1911.  Louis had graduated from Harvard earlier that year.

Three weeks later, on January 24, Corinne hosted the first of the related entertainments.  The New-York Tribune reported on the luncheon she gave “for Miss Allison Pierce, whose engagement to Louis de Bebian Moore was recently announced.”

Allison Douglass Pierce was the daughter of Mr. and Mrs. Winslow Shelby Pierce and, like her fiance, moved in the best of circles.  A year earlier she had been a member of the wedding of Vivien Gould to Lord Decies.  Her own “country wedding” would take place at her parents' Long Island estate, “Dunstable,” in September 1912.

To get the many guests from Manhattan a special train was arranged.  The marriage of the two socially-visible young people prompted The Sun to call it “interesting” to society.

In 1930 the Moores could boast that their home, or rather their rear yard, was the center of Manhattan society.  For years the Social Register Association had analyzed the addresses of prominent families listed in the New York Social Register.  It then discerned the exact social center of Manhattan.  This year, according to the Association, “the precise point…was in the southeastern quarter of the rear yard of 15 East Seventieth Street.”

Sadly for John and Corinne Moore, they could not claim the distinction for long.  The continuous northward movement of society placed the social center a block away by 1932, between 71st and 72nd Street and Madison and Park Avenues.

Two years after John Chandler Moore became Chairman of the Board of Tiffany & Co., his wife died at the Oyster Bay estate on October 10, 1942.  Four years later Moore died in the 70th Street mansion at the age of 82.

At the time of Moore’s death the Barmore School operated from No. 22 East 60th Street.  The private women’s college offered courses in the liberal arts and “practical career preparation.”  In 1947 it acquired the Moore mansion, converting it to classrooms.

The school kept up with the changing times, introducing “an accelerated specialized training for college graduates” in 1951; and that same year, a course in wedding planning.

The Israeli Consulate was located in the adjoining house at No. 11 East 70th Street.  By 1958 the Israeli Government had taken No. 15, as well, as its United Nations delegation building.  A fire that started in the “wood-paneled office” of counselor Arthur Liveran at around 10:15 a.m. on April 31 that year tied up traffic in the area for two hours and briefly trapped one worker, a secretary, on the fourth floor.  She was rescued by ladder by firemen.

In 1983 Nos. 15 and 11 had been internally connected and a conversion to condos by Raphael Cohen and Enrico Frigerio was underway.  In October that year The New York Times announced that one-, two- and three-bedrooms apartments would be available from $459,000 to $1 million.  John Chandler Moore’s former home lured celebrated house-hunters.

Spy magazine reported “it came as no surprise when, shortly after the Time’s announcement ran, [Richard M.] Nixon himself appeared on the stoop at No. 15 East 70th Street, eager to buy.  The renovation had hardly begun, but Nixon wasn’t taking any chances; he put down a deposit on one of the apartments and signed an agreement to buy it.  Later the fashion designer Norma Kamali came, and she was so charmed that she wanted to buy two apartments.  Later still came another person well know to Manhattan real estate brokers—Madonna.”

Among later owners would be Jerry W. Levin, former chairman of the Sharper Image whose unit engulfed the entire third floor.  In December 2012 a sprawling apartment, deemed by Robin Finn of The New York Times to be “a ‘Petite’ Versailles,” was offered at $10.95 million.

From the sidewalk view, little has changed to John Chandler Moore’s mansion.  It looks much as it did in 1910 when The Times deemed this “the finest residential block in Manhattan.”

photographs by the author
Posted by Tom Miller at 12:55 AM