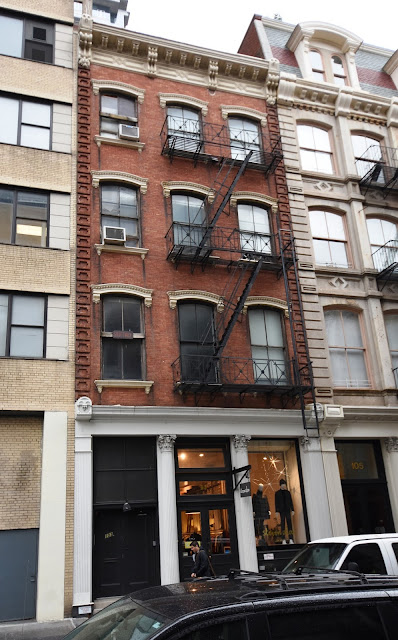 As the residential hem of Manhattan crept further northward in the 1820s and ‘30s, the block of Franklin Street between Church Street and West Broadway saw the rise of Federal style brick homes.  In 1833 builder James Russell purchased the 25-foot wide plot at No. 103 Franklin Street.

Within the year a three-story brick house was completed, most likely the work of Russell himself.  The following year, early in 1835, he sold it to the 43-year old George Ehninger, who was no ordinary merchant.

Before her marriage Ehninger’s mother was Catharine Astor, sister to John Jacob Astor.  She and her husband, John Christopher Ehninger, had arrived in New York in the late 18th century and George was born here in 1792.  Educated at Columbia College; he marriage Eliza Whetten in 1822.  Through the influence of her father, Captain John Whetten, the young couple was socially and professionally connected with the Brevoorts, Sedgwicks, and other important New York families.

It is doubtful that the wealthy Ehninger family ever lived in the relatively modest Franklin Street home; rather using it as investment income.  In January 14, 1851 an advertisement in the New-York Daily Tribune offered “Very desirable rooms, with board, can be obtained at 103 Franklin-st. for a family, or single gentlemen.”

George Ehninger died just four months later, on May 6, 1851.  By now commercial interests were inching nearer to Franklin Street.  Before long, just three decades after they were built, its houses would be converted to businesses.

By 1866 No. 103 Franklin Street was owned by S. Heilpern.  The building had already been leased to commercial tenants, one of which was burglarized in 1865.

Archibald P. Bachman ran his shop here.  The small operation created silk net and lace.  One of his employees, a lace maker named Paul Greensmith, lived upstairs and, according to The New York Times, girls employed at the International Hotel, had rooms in the house as well.

On the night of August 12, 1865 Greensmith saw a man leaving the building with a black leather valise.  Suspecting that something was amiss, he “pursued and catechized the fellow, but could learn nothing satisfactory,” according to The Times 12 days later.  He found a private watchman, Officer Quick, and the two chased the man own Church Street, then along White Street towards West Broadway.  All the while they hollered for the regular patrolmen—Officers O’Rourk, Calhoun, See and Regan—whose beats were along those blocks.  None of them responded.

The two civilians captured Henry Burks.  In the suitcase was $600 worth of silk and other articles.  He was held on the charge of burglary in the third degree.  The following day The New York Times said Burks had “burglariously entered the store through a rear window.”

Greensmith and Quirk complained to the court that the police officers were nowhere to be found when needed.  It was a grievous mistake.  The police department went on the defensive and in clearing its patrolmen, cleared the burglar.

The argument in court was that because of the roomers living in the house, the door was always unlocked and “that ordinarily a policeman would have no reason to suspect any person that might come therefrom with a valise in hand.”  Testimony said that the four cops “were properly patrolling their respective posts at the time when Greensmith and Quirk shouted for them.”

Despite the evidence found with Burks, witnesses testified that he was elsewhere at the time, “and others were produced to show his good character.”  He was acquitted--but not before Mr. Acton gave the private watchman a warning.  “It does not appear that our officers have been in fault; but I would advise you, Quirk, to resign as a private watchman; for it you were a member of our force we should break you.”

The following year Heilpern hired architect Alfred A. Dunham to convert the house into a commercial structure.  Dunham had just completed one of his most memorable projects—the five-story Commercial Building downtown on West Broadway.  The $32,000 stone and cast iron building was described by The Architects’’ and Builders’ Guide in 1868 as “of an original elaborate design.”

Dunham increased No. 103 to four stories and extended it to the rear.  The cast iron base for the retail space featured fluted Corinthian columns with ornate, leafy capitals.   The highly-attractive Italianate upper floors were distinguished by inventive paneled brick quoins running up the sides.  Dunham used cast iron for the handsome lintels and the cast metal sills were upheld by pretty flower-like brackets.  A cast, bracketed cornice completed the design. 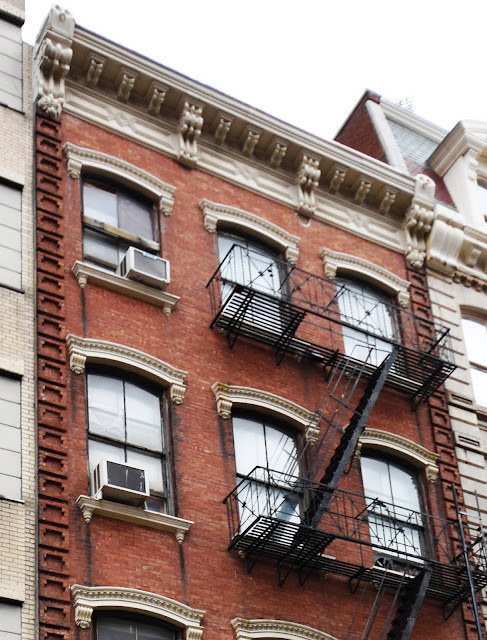 The transformed building filled with other lace and cotton goods dealers.  Among the first was Henry R. Thompson.  On October 26, 1871 his clerk, Joseph Howard, was imprisoned in the Tombs for stealing five pieces of cotton goods from his employer, valued at $32.

Hoffstadt Bros. was here about the same time, making “fine lace goods.”  The company would remain here until declaring bankruptcy in 1885.

An unusual tenant in 1885 was Robert Solteau, whose firm sold rubber.  The company sued rubber broker Henry A. Smith for fraud in December that year.  According to Solteau’s agent, Andrew Shenkel,  in April Smith had reported he had made a sale of 10 tons of Borneo rubber to be delivered on July 15 to the National Rubber Company of Bristol, Rhode Island.

Smith received the nearly $9,000 in rubber; but failed to pay.  When Shenkel wrote to the National Rubber Company, he was informed that they had never placed an order.  Smith, whom The New York Times described as “a young man of good appearance,” was found guilty of fraud.

Rather amazingly, when Smith was released from prison he went back to his old ways.  And he targeted the same firm.  On April 29, 1897 he pleaded not guilty for grand larceny, having obtained $20,000 worth of rubber from Robert Solteau “on the plea that he could sell it at a profit to a Boston firm.”

Smith did sell the rubber to a Boston company, but he pocketed the $20,000 and the profits and fled to Canada.

By 1895 the successful umbrella manufacturer W. N. Stevenson & Co. was in the building and would remain for years, routinely advertising for expert “umbrella cutters.”

None of the tenants in No. 103 Franklin Street were as colorful and arguably obnoxious as Frederick S. Pinkus, a principal with Otto Jaffe in the firm O. Jaffe & Pinkus, linen importers.  The company had been located on Leonard Street in the 1890s, but had relocated to Franklin Street in 1902.

Wealthy and socially-connected, Pinkus appears to have felt he was above the law.  In June 1904 he returned from Europe on the Campania, bringing with him $2,100 worth of jewelry, clothing, liquor and glassware that he and his wife had purchased.  Rather than pay duty, he attempted to slip Customs Inspector Calder J. Walcott a bribe.

He managed to avoid arrest until January 12, 1905 when a United States Marshall arrived at his home at No. 70 East 56th Street with a warrant charging him for smuggling and attempted bribery of United States revenue officers.  Pinkus paid his $5,000 bail and went back home.  He was made aware, however, that the penalty for attempting to bribe a customs officer on duty was a fine of $2,000 and imprisonment “at hard labor for one year.”

Pinkus managed to stay of out jail, but he was fined $7,000 for the smuggling.  His attempt to avoid the $1,011.53 duty got even costlier in April when the law division of the Custom House began forfeiture proceedings for the goods.  On April 4, 1906 Pinkus told authorities he would pay for the cost of the goods and the duty.  Apparently Mrs. Pinkus did not want to give up her glassware and jewelry.

It was around this time that the firm name slightly changed.  In January 1906 the Dry Goods Guide noted “The firm was O. Jaffe & Pinkus, and strange to say a sign on a linen house in Franklin street just now carries a firm designation that reads ‘O’Jaffe & Pinkus.’  It provokes comment.”

Frederick Pinkus was back in court on September 1912 defending himself in a sordid case.   At around 2:00 on the morning of September 20, 20-year old dressmaker Elsie Hutter was on her way home after a party.  She was waiting for the streetcar at 23rd Street and Broadway when Pinkus pulled up in his automobile and pretended to ask for directions to Harlem.  With him was a friend, A. G. Winchester.

Pinkus offered the young woman a ride, which she declined.  But finally he persuaded her to get in.  When the car reached the middle of the block on Seventh Avenue at 44th Street, Pinkus stopped the car and, according to The Sun the following day, he “started to embrace her.”  Elsie told the court the next morning she had to defend herself with a hat pin.

Elsie’s screams were heard by Patrolman Hembt and Sergeant Quionn of the West 47th Street station, who came to her rescue.  They arrested Pinkus on Elsie’s charges “of insulting her.”

That morning in court Frederick Pinkus was his usual self-satisfied self.  “He assured the court that the affair was an everyday occurrence and hardly worth talking about, to his mind,” reported The New York Times.  He insisted that Elsie had climbed into “the tonneau of the car he was driving willingly, and he denied that he had insulted her.”

When Winchester took the stand, he said he did not remember much of the incident.  “He did recall the girl’s having screamed, he said, but he didn’t know what she was screaming about,” said The Times.  All the while Winchester was testifying Pinkus “made light of his arrest” and “laughed outright more than once.”

The judge was not as amused as was Pinkus; and all laughter stopped when Magistrate Krotel addressed him.

“This is one of the most blackguardly cases that has ever been brought before me.  To injure a defenseless female is low and I don’t propose to impose a fine on this defendant.  I shall impose a prison sentence.  This sort of thing has got to stop.  There is less excuse for this man, who is of good breeding, good education and moves in good society and is wealthy, than there is for a poor, ignorant man who doesn’t know any better.  The sentence of this court is ten days in the workhouse.”

The Times noted “The weight of the sentence was an entirely unexpected blow and Pinkus was a very crestfallen man when he was led to the pen.”

No. 103 Franklin continued to house linen and cotton goods dealers throughout the first half of the century.  In 1916 Blum Brothers took space here, around the same time that Farley, Harvey & Co., linens, moved in.

In January 1920 the building was sold to Channing Smith, proprietor of the Valley Woolen Mill of Massachusetts.  The firm was established in1865 by the Smith family and was described by the Real Estate Record & Builders’ Guide as “one of the prominent woolen businesses in central Massachusetts.”  The journal advised that the building would “be used as selling headquarters for the products of the mills controlled by Mr. Smith.”

Later the building was purchased by F. Frisch, Inc., linen importers.  The firm owned the property until 1955.

The Tribeca neighborhood suffered neglect in the second half of the 20th century.  In 1992 No. 103 Franklin Street was boarded up and vacant.  But a renaissance of the area brought renewed life in the form of trendy shops, cafes and residential space.

In May 2006 a renovation of the building was completed that resulted in modern store space at sidewalk level and three apartments in the upper floors—a single apartment on the second floor and two duplexes above. 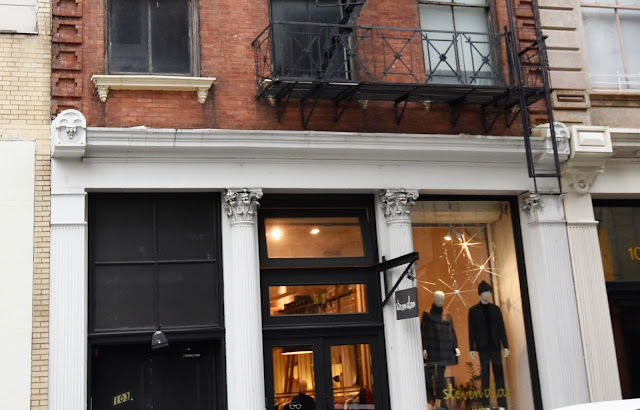 Although chunks of the sophisticated Corinthian capitals have been lost and the storefront modernized; most of Dunham’s handsome structure survives.