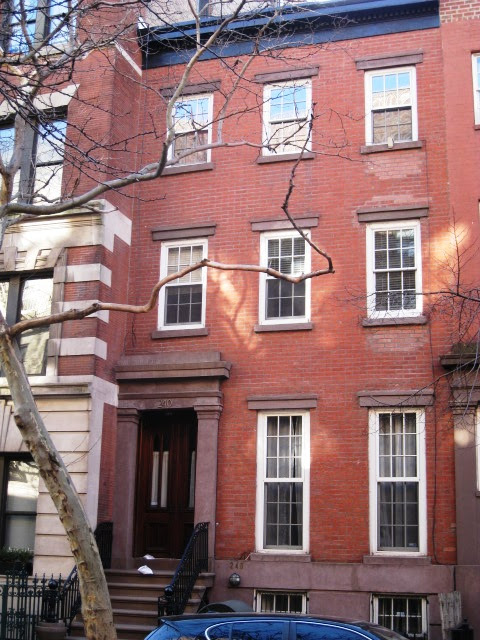 In the 1830s and ‘40s the developing neighborhood of Chelsea saw the construction of speculative rows of merchant class homes.  On the southern side of West 21st Street, between Seventh and Eighth Avenue, a string of identical Greek Revival rowhouses appeared.  Clad in red brick, they rose three stories above rusticated brownstone basements.  The dignified residences would attract financially-comfortable families, like the newly-weds Owen G. and Caroline Matilda Morton Hanks who would move into No. 240.

Owen and Matilda were both born in Troy, New York.  But in 1838 the 18-year old Owen had moved to New York City and was apprenticing with the engraving firm Rawdon, Wright and Hatch.   By 1846 the aspiring artist and engraver had accumulated sufficient money to marry Caroline.

While Hanks would produce exquisite artistic engravings; providing for a family of seven required a reliable income.   He partnered with John G. Wellstood and Benjamin W. Benson to form the firm of Wellsood, Benson & Hanks.  The company engraved bank notes from No. 52 Merchants’ Exchange.

When Benson retired in 1852, a notice in the New-York Daily Tribune on February 26 announced that the partnership had dissolved and “Wellstood & Hanks have associated with themselves Dewitt C. Hay and William H. Whiting.  The merged companies continued engraving bank notes as Wellstood, Hanks, Hay & Whiting.”
When Owen G. Hanks died in the West 21st Street house on October 27, 1863, his son Arthur was studying at the New York Free Academy.   Earlier that year, in July, the academically-inclined young man won the “Pell Medal;” the First Prize Gold Medal of the Introductory Class.  Four years later he gave the valedictory address at what was now the College of the City of New York.

By now the Hanks family had left West 21st Street.  The house became home to William Lanman Bull, a young broker who was descended from prominent colonial families on both sides.   His father’s family traced its American roots to Henry Bull who arrived in 1635; and his mother, Mary Huntington Lanman, descended from James Lanman who settled in Boston around 1700.

Following his graduation from the College of the City of New York in 1864, William Lanman Bull soon found a job with the banking house of Edward Sweet & Co.  This was possibly a result of Mr. Sweet, the senior partner, having married Bull’s sister in 1865.  Bull was living in the 21st Street house when he was made a full partner in the firm in 1867.

Bull’s fortune increased and he would eventually be president of the New York Stock Exchange, a director in two railroads as well as president of the St. Joseph & Grand Island Railroad Company.  The 21st Street house was acceptable for a wealthy, bachelor broker; however upon his marriage to Tasie M. Worthington, daughter of renowned engineer Henry R. Worthington, the newlyweds moved to the a prestigious Fifth Avenue address.

For several years, at least throughout the 1870s, W. H. B. Totten and his family lived in the house.  Described by The American Produce Review as “one of the best known and most respected of New York’s produce merchants, he was senior partner in the wholesale produced firm of W. H. B. Totten & Co., President of the Irving Savings Bank, and a trustee of Rutgers Female College. 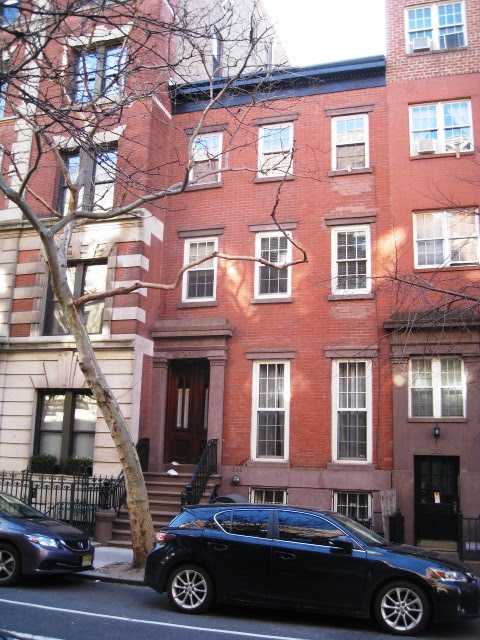 As the century drew to a close the Chelsea neighborhood of private homes had changed.  The wide residences were, for the most part, being operated as boarding houses.   The Tottens were gone from West 21st Street by 1890 and would move far north on Riverside Drive.  By 1891 No. 240, too, was a boarding house.  Among the residents that year were John T. Taylor, the chief engineer for W. & J. Sloane, and Mrs. John Flavel Mines.

The house would be the scene of a funeral on November 8 that year, notable for the deceased and the tragic circumstances of his death.  John F. Mines was for many years a well-known newspaper writer.  A graduate of Trinity College and an ordained Episcopalian minister, he chose journalism over religious life.

Mines wrote a series of newspaper articles on the history of New York City under the pseudonym Felix Oldboy.   The sketches were collected into several volumes by Harper Brothers and the highly successful books, like A Tour Around New York and Walks in Our Churchyards.  But success came with a cost.

The New York Times would remark “Mr. Mines was a bright and successful writer, but the desire for drink caused his downfall.”

Unable to deal with her husband’s heavy drinking, Mrs. Mines left him and took rooms at No. 240 West 21st Street.   On Tuesday night, November 3, 1891, Mines was arrested for intoxication and sent to the workhouse on Blackwell’s Island.  The Times reported “It was soon discovered that he was suffering from alcoholism, and he was removed to the hospital.”

The Bennington, Vermont, Banner gave a slightly different version of the story, saying “Mines, who had been on a protracted spree, was taken to the Island at his own request, where he was treated for alcoholism.  He died in convulsions, of which he had seven at frequent intervals.”

Mines’ drinking had alienated not only his wife, but his friends.  On November 7 the body was taken to No. 240 West 21st Street and the funeral was held there the following day.  Sadly, there seemed to be no one willing to associate with the once-esteemed writer even in death.  “The Press Club notified Keeper White at the Morgue that the club would take charge of the body if necessary,” reported The New York Times on November 7.

Mrs. Mines and the other residents enjoyed modest but respectable accommodations.  In 1892 an advertisement in The Sun sought “Two girls to do general housework, laundry, etc.; one must be good plain cook, moderate wages, pleasant home.”

No. 240 West 21st Street continued to be operated as a boarding house for decades.  In 1921 it was sold to Samuel Golombeck.  Joseph Situarity ran the boarding house operation.  His day-to-day routine was shattered after Jeff Lewis took a room on November 4, 1923.

Lewis had been a bellboy at the Waldorf-Astoria Hotel.  He left his wife in New York while he moved to the South where, according to The New York Times, “it was said he was to go into the hotel business, backed by a Houston, Texas, man who had taken a fancy to him while he was in New York.”

Whatever transpired in the South came to an end and Lewis returned to New York.  Inside the furnished 21st Street room he wrote a note to his estranged wife, Madeline, who lived at No. 111 West 49th Street.  Then, later that night, a fellow lodger heard screams coming from Lewis’s room.

He notified Joseph Situarity and as the pair ran up the stairs, Lewis came rushing down.  “They asked him what was the matter and he told them, they said, to leave him alone and they would fine everything explained in a note in his room.”

Situarity and the boarder forced open the door, which had a dresser shoved up against it.  Lewis had managed to move it enough to slide into the hallway.  The room was filled with suffocating illuminating gas.  The note on the bureau explained to Madeline that he intended to take his life.

But then, apparently, he changed his mind.  He was taken to Bellevue hospital suffering from gas poisoning, where it was said he would recover. 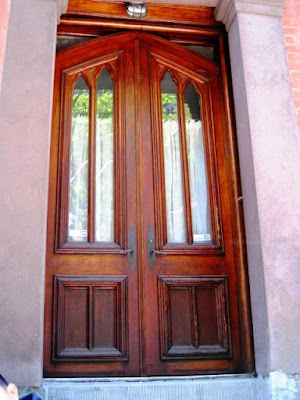 Throughout the 20th century the exterior of the Hanks house remained little changed.   There are three spacious apartments in the former boarding house, the last intact home from the original row.

photographs taken by the author
Posted by Tom Miller at 2:50 AM