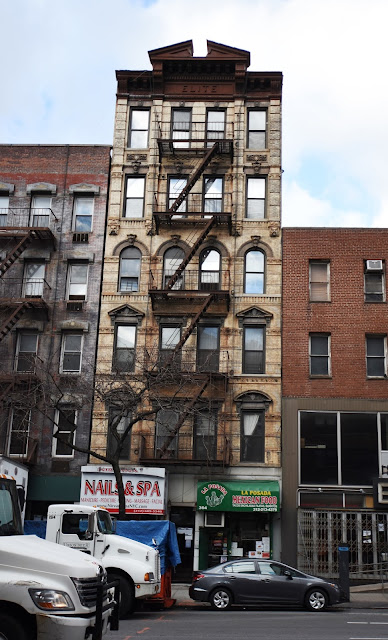 As the 19th century drew to a close, the block of Third Avenue between 26th and 27th Streets was lined with brick or brownstone-faced tenement buildings.  The last vestige of the neighborhood of a half century earlier was at No. 364.  Here two three-story wooden buildings sat on the plot that extended back to Broadway Alley.

Dreyfus put his architect of choice, George F. Pelham, to work designing another tenement.  Theirs was a frequent relationship and in 1899 alone Pelham would design no fewer than nine other such buildings for Dreyfus, almost all of them on the Lower East Side.

The $30,000 building was completed in 1901.  As was the case with many tenement buildings, it was heavily ornamented.  Architects and developers realized that the blue collar residents would be attracted not by architectural refinement, but by flash.  Pelham managed, however, to keep his design from stepping over the line, resulting in a rather attractive structure. 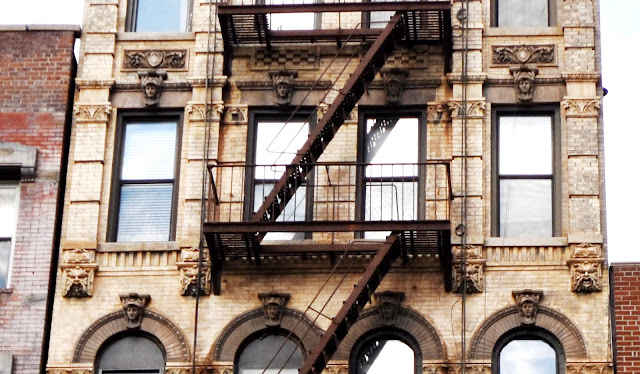 Dreyfus dubbed his building the Elite.  And the name was incorporated into the hefty pressed-metal cornice that was topped by a prominent broken pediment.

The residents of tenement buildings led colorful, if often tragic, lives.  Among the first residents of the Elite were 29-year old Frederick Tomlinson and his 35-year old wife, Sarah.   Frederick was a “driver” and the couple had not been married long when they moved in.  Sarah had the uncomfortable feeling that Frederick had married her for her $9,000 and the boarding house she owned at 23rd Street and Ninth Avenue.

Her suspicions proved true when the couple approached the corner of 27th Street and Seventh Avenue on June 22, 1901.  They ran into another woman who demanded to know who Sarah was.  A loud and “spirited” argument among the three ensued.  Both women, it turned out, insisted that she was the wife of Frederick Tomlinson.

The confrontation was such that Policeman Mills took all three to the West 20th Street Police Station.  On the way to the precinct, the two women settled down long enough to realize they had both been duped.  And the situation worsened.

The New York Times reported “The women compared notes on the way to the station, and came to the conclusion that Tomlinson had married still another woman.”  The two wives told investigators that they “had given him considerable sums of money after marriage.”

The indignant Sarah pressed charges of abandonment and bigamy, telling the police about the two other wives.  In court Frederick may have had less reason to fear the judge than the witnesses.  The New York Times said “The prisoner will be arraigned this morning in the Jefferson Market Court, and the Captain said the three alleged wives would be on hand.”

Retirement was rarely an option for low-income tenement residents, and in 1904 72-year old Patrick Barry was still driving a cab.  He and his wife (whom The Sun said “is only 70”) had had 17 children, 14 of which were still living.  On April 10 the couple prepared to celebrate their 50th anniversary; but they got into a bitter disagreement.

The Sun reported “He felt so grieved that he bought a little carbolic acid and drank it at Twenty-fifth street and Third avenue.”  According to The New York Times he had taken a full two ounces of the poison.  But then he changed his mind.

“Before the acid began to work he regretted it, and hustled to Bellevue,” recounted The Sun.  “There his stomach was pumped out and he was sent to the prison ward, where he began to cry, and asked that his wife be sent for.”

Attempting suicide in 1904 was a crime.  What should have been a joyous celebration of half and century of marriage ended with Patrick Barry succumbing to the poison in the prison ward.

The socioeconomic environment of tenement living often resulted in young residents turning to crime.  On May 13, 19-year old Joseph Kearns was involved in a heinous crime when he and 20-year old Peter Powers, who lived on Second Avenue, attacked Antonio Bilancia.   Bilancia worked at the Dennis Scully Restaurant at No. 522 Second Avenue and that day he was taking the receipts to the Fifth National Bank at 28th Street and Third Avenue.

The young men struck him over the head with an iron pipe wrapped in a newspaper and stole the $50 in cash and two checks he was carrying.   Three witnesses, Mrs. T. E. Tell, Harris Marks, and Mrs. Youngford, saw the incident and gave police descriptions of the robbers.

Apparently Joseph’s mother was equally dangerous.  When the witnesses appeared in the courtroom on August 19, 1912, they refused to identify the defendants.  The New York Times reported “It was said that these witnesses had been warned by Kearns’s mother not to say anything detrimental to her son on pain of being shot.”

Despite Mrs. Kearns’s efforts, Joseph was convicted of robbery in the first degree.  An investigation into the charge of threatening the witnesses was initiated by Assistant District Attorneys Murphy and Press.

Perhaps more shocking was the arrest of resident William Nolan and his two cohorts, Daniel Sullivan and Brewer Lee on April 24, 1914.  The robbers were found with $400 of jewelry in their possession, stolen from the home of Henry Minia Dennis of No. 435 West 24th Street.

What was especially appalling was the age of the offenders.  Nolan and Lee were both 12 years old and Sullivan was 11.  They were captured when they stepped off the 14th Street ferryboat on the Hoboken side of the river.  A passenger had overheard them “discuss plans for a trip West to become bandits,” according to The Sun.

Happier press coverage for the apartment building came in 1917.  In August Stefano Guerrieri moved in, having come to New York City from Tampa.  The Sun painted a romantic picture when it reported on November 24, 1917 “Stephano Guerrieri, until three months ago a cigarmaker in Tampa, Fla., stepped out from his rooms at 364 Third avenue last night and became a real hero among all New York Italians.”

Guerrieri had composed a one-act opera, Il Pimro di Maggio (The First of May) which was produced “before a crowded house at the Garden Theatre.”  The newspaper said that following the performance the composer was hailed “by the Italians as another Verdi.”

The Sun told its readers an amazing story.  “He had never had any musical education and never heard an opera until two years ago, when he saved some money from his work as a cigarmaker and attended a performance in Tampa.”

The Music News, in an article two weeks earlier, was a bit more accurate.  “The new composer, Stefano Guerrieri, is a native of Sicily and is only 30 years of age; studied at Palermo with the celebrated Maestro Grafeo.  He has written several compositions which are well known in Italy, but they have never reached America.”

Michael Jacobs, who lived in the Elite in 1927, continued the tradition of some residents living outside the law.  He owned and ran the Francine Club at No. 127 West 49th Street, despite the restrictions of Prohibition.  The nightclub was raided on September 17 that year and Jacobs was arrested, charged with violating the Volstead Act and conducting a dance hall without a license.

When the building was sold by the City Bank Farmers Trust Company in 1940 for $36,000, the buyers, I. Maas Sons contractors, announced their intention to make “alterations.”   Changes would be made only at street level, however. 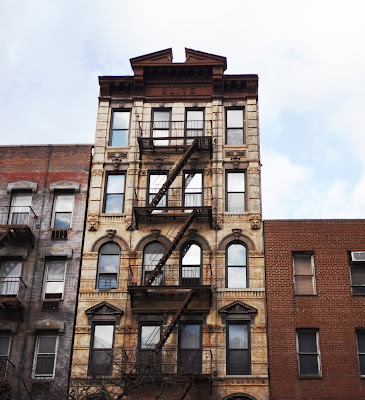 Today, other than replacement windows, above the unsightly store fronts little has changed to George F. Pelham’s Elite flats building since the day Frederick Tomlinson moved in with his newest wife.