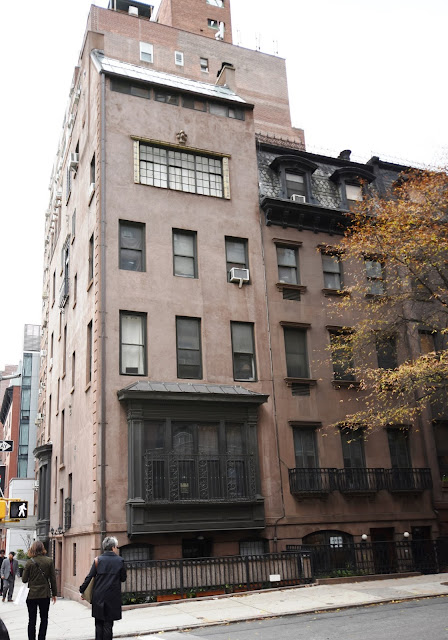 In the first years following the Civil War construction resumed across the city as its laborers and craftsmen returned from the battlefields.  In 1868 speculative developer and carpenter John Coar hired architect John G. Prague to design a row of four handsome brownstone dwellings in the fashionable Murray Hill neighborhood.

Stretching from No. 130 East 37th Street at the southwest corner of Lexington Avenue and 37th Street, to No. 124, the 19-foot wide homes were completed in 1869.  They were the latest in fashion with slate-shingled mansard roofs, floor-to-ceiling parlor windows and elegant interiors.

No. 130 was the most desirable of the row because of its corner location that afforded additional sunlight through the Lexington Avenue openings.  It became home to the family of coal merchant John W. Andreas.  At a time when institutions like hospitals burned around 500 tons of coal each winter and railroads, steamships, and factories were dependent on the fuel; dealers like Andreas amassed huge personal fortunes.   He also held a directorship in the Irving Insurance Company.

According to John Charles Franceschina, in his 2003 biography David Braham: The American Offenbach, only three years after moving in Andreas sold the house to English comic singer William Horace Lingard.  “On June 1 [1872]…William Horace Lingard reappeared in New York City after forty weeks on the road.  Closing in Wilmington, Delaware, on May 31, Lingard boasted that the tour was the most profitable of any since he came to the United States and, almost as if to prove his claim, he purchased a brownstone, 130 East 37th Street, at the corner of Lexington Avenue.”

He had arrived in America in 1868 with his wife, Alice Dunning Lingard, and earned the reputation as one of the funniest entertainers of the time.  He mastered the art of quick change, playing the parts of both women and men and performing as many as six roles at a time.

Stewart’s interest in the house was purely as an investment.  He leased it to upscale residents like stockbroker Walter Brooks, who rented the house around 1890; and C. A. Childs, a pharmacist, who lived  here in the late 1890s.

After owning No. 130 for 15 years, Stewart sold it to the Hatasatah Realty Co. in 1903.  By now the Italianate brownstones along the block were architecturally passe and the firm hired architects Boring & Tilton to perform a face lift on their new property.

High stoops had fallen out of favor and the American basement plan—the arrangement by which the entrance was at or just below street level—was now the fashion.  The architects removed the stoop, moved the entrance to Lexington Avenue and installed attractive metal-clad oriel windows.

With the updating completed, Hatasatah Realty Co. sold the house on February 27, 1904 to Victor J. Cumnock.   The wealthy attorney was also President of the Arizona Smelting Co., and a director in the La Follett Coal, Iron and Railway Co.  Three years after purchasing No. 130, Cumnock transferred title to his wife, Grace.  Grace Cumnock, incidentally, was the daughter of Massachusetts Governor Thomas Talbot, who had also founded the Talbot Mills.

The couple lived in the house until 1912 when Grace leased it to George B. Sanford of Lawrence, Long Island.   In October 1915, Rene McPherson leased the house, followed by the family of Joseph A. Jones.

The Jones family maintained a summer residence at Great Neck, Long Island.   On February 1, 1918 the engagement of their daughter, Joyce, was announced.  It was a socially noticeable match; the intended bridegroom being Ensign James Ward Alker of the Navy Reserves.  Alker lived with his widowed mother, Mrs. Alphone H. Aler, at the enviable address of No. 21 East 66th Street.  His social standing was reflected in his memberships to the New York Yacht and New York Athletic Clubs.

The following year Grace leased the house to Mrs. Nathan K. Averill who was possibly her last tenant.  Like the Hatasatah Realty Co. had done, by 1922 Victor and Grace Cumnock recognized that their property could use updating.

A decade earlier, in 1911, architect Frederick Junius Sterner had started a trend by purchasing vintage Greek Revival and Italianate brownstone residences and transforming them to stucco-covered Mediterranean, Tudor or Spanish-style fantasies.  Now the Cumnocks commissioned the architectural firm of F. Albert Hunt & Kline to do the same to No. 130.

The two-year make-over resulted in an additional floor for an artist studio.  What had been the top floor was now highlighted by a broad many-paned window framed in Arts & Crafts tiles.  Slathered in stucco, the Lexington Avenue façade was peppered with Arts & Crafts tiles and an upper opening now masqueraded as a Spanish balcony.  Apparently the Cumnocks directed the firm to minimize expenses.  The rusticated brownstone English basement level, the corner quoins, and the 1903 oriels were left intact. 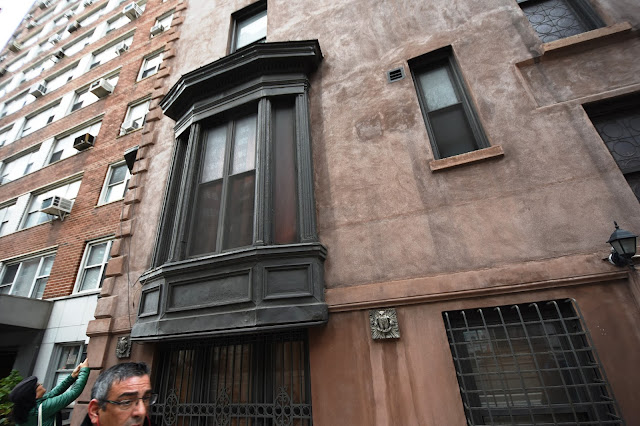 An elevator was installed and major interior renovations were done.  Upon the completion of the alterations, the property was sold to the 130 East Thirty-Seventh Street Corporation in 1924.  Although the Department of Buildings continued to document the house as a “single family dwelling,” the new owners immediately began leasing apartments. 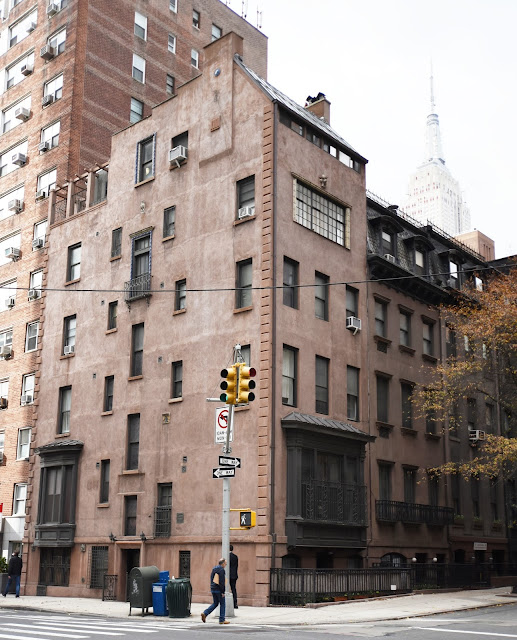