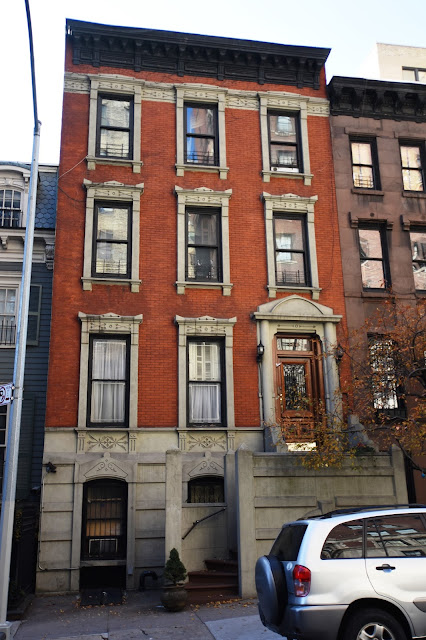 John H. Browning’s idea for building an apartment house on East 93rd Street in 1875 could have been considered far-thinking, risky, or simply foolish.   While development was taking place on the until recently rural Upper East Side in the 90s, it would be a few years before elevated trains would extend this far north, making the area more accessible.

Nevertheless, in September 1875 his architect, John McIntyre, filed plans for a three-story brick apartment building at No. 126 East 93rd Street, between Lexington and Park Avenues.  The structure was completed in 1876 at a cost of $12,000—in the neighborhood of a quarter of a million dollars in 2015.

McIntyre had produced an architecturally up-to-date apartment building that successfully pretended to be a private home.  Faced in orange-red brick with contrasting stone trim, it was decorated with incised carvings reflective of the newly-popular Eastlake Movement.  Charles Eastlake’s influential book Hints on Household Taste in Furniture, Upholstery and other Details had been in print in the United States for only three years.  McIntyre’s embrace of the British architect’s ideas of clean, geometric designs put No. 126 East 93rd Street on the cutting edge.

Respectable families moved into the apartments—just one per floor.  Samuel L. Douglas and his family were among the first residents.  Douglas attended the 86th Street Methodist Episcopal Church and was Financial Agent for the House of Rest for Consumptives in Mount Hope, in Westchester County New York.  The Douglas family would remain in the building for several years.

In the summer of 1883 Edward E. Rogers and his wife moved into the third floor apartment.  A carpenter, he was the superintendent of the carpenter shops on Ward’s Island.  Despite his substantial job, their lives were filled with pain.

Before moving to East 93rd Street the Rogers family, including sons Henry and Nelson, and daughter Charlotte, lived on Ward’s Island.  Charlotte was mentally challenged, The New York Times later describing her as “15 years old, but a child in character,” although “a remarkably pleasant, docile child, with a disposition to be religious.”

In the spring of 1883, all three of the children contracted typhoid-pneumonia.  Tragically, both sons died and Charlotte, who was very close to Henry, was devastated to the point that The Times said “her reason was wrecked.”

Her parents placed Charlotte in a private asylum in Brooklyn where her mental condition seemed to improve, although it was reported “she had to be closely watched, as she appeared to have a mania for jumping out of windows, and was frustrated in several attempts.”

By August Rogers and his wife had moved into No. 126 East 93rd Street.  Intending to place Charlotte in the Bloomingdale Insane Asylum, they brought the girl to the apartment on Friday, August 17.  It proved to be an unwise move.

On August 19, 1883 The New York Times reported “When she reached home her mania increased, and she spoke of having wings and being able to leap from a window with impunity.”  Each time she attempted to get near the window that night her parents managed to stop her.  Finally, late in the evening she seemed to have settled down.  Her parents believed “the evil spell had passed for a time.”  Charlotte was allowed to sit in a chair by the window.

Before her mother could react, Charlotte, “under the control of an insane fit,” according to The Times the next morning, leaped out the third floor window.  The girl suffered broken bones and other injuries, but was remarkably serene as the ambulance surgeon readied her for removal to Presbyterian Hospital.

“She told him with a calmness that was startling that the Saviour had given her wings which bore her safely during part of her fall, but they failed her when half way down.”

John Browning’s heirs sold the building on August 20, 1890 to Margaret Rohan.  She paid $18,750 for the building that continued to house stable, respectable families.  That would change when an elderly German immigrant, Wilhelmina Eckhardt moved in.
Wilhelmina’s astoundingly cold-hearted career had begun back in Germany.  One of her two daughters, Marie, would later reveal that when she was three days old her mother wrapped her “in a bundle of rags and cast her into the street.”  Marie’s grandmother rescued the infant and reared her.

When Marie reached adulthood she immigrated to New York City where “she found her mother conducting a disorderly house,” as later reported in The Topeka Daily Capital.  Her shock at finding her mother running a brothel was doubled when she tried to persuade Marie to work there.  She refused.

By 1906 when Wilhemina Eckhardt was living at No. 126 East 93rd Street, her two daughters had married.  Marie, now Mrs. Schoch, lived in Worcester, Massachusetts.  Her sister, Wilhelmina Ihrig, arrived from Regensburg, Germany in August that year.  Until she found her own apartment on East 99th Street, she briefly lived with her mother who, despite her advanced age, had adopted a young boy.

Wilhemina Eckhardt advertised herself as a midwife and conducted her business from the 93rd Street apartment.  But Wilhemina Eckhardt’s practice was not what it seemed.  Not only did she perform abortions here, she murdered and disposed of unwanted newborns.

Mrs. Ihrig discovered the truth when her little step-brother casually mentioned that Wilhemina burned babies in the kitchen stove.   She confronted her mother who, now exposed, “proposed that they go into partnership.”

Astonishingly, Mrs. Ihrig pretended to agree; intending all along to gather evidence to take to authorities.  She contacted her sister who helped with the subterfuge.  In the meantime, the women informed the county medical society of what they were doing.

The horrors of the Eckhardt apartment were luridly exposed in a November 1906 hearing, and spread quickly across the country.  “Horrified by the alleged business of their mother, two daughters of Wilhelmena [sic] Eckhardt, of 126 East Ninety-third street, are said to have given to the police information which has landed her in the Tombs without bail and the authorities say she may have to face charges of murdering a dozen babies and destroying their bodies in her kitchen stove,” reported The Topeka Capital on November 21.

The Washington Times noted “Both Mrs. Ihrig and Mrs. Schoch asserted that they did not wish to be known as the daughters of Mrs. Eckhardt, who, they said, is not worthy to bear the name ‘mother.’  Both declared they had seen Mrs. Eckhardt kill hour-old infants and dispose of the bodies by burning them in her kitchen stove.”

The testimony of the two women against their mother was shocking and damning.  Wilhelmina Ihrig refused to assist in burning bodies, she said, raising the ire of her mother.

Marie Schoch gave an even more chilling account.  The Capital reported “She declared that she saw her mother perform an operation on Anna Jackson, otherwise Sally Brown, a colored woman, to whom a child was born in the house and her mother told her how easy it was to kill a child and to dispose of it by burning the body in the stove.  She declared that ‘her mother actually did kill the baby by twisting its neck, and that afterward she burned it.”

On December 21, 1906, Wilhelmina Eckhardt was sentenced to two and a half years in the penitentiary for “mid-wifery, baby farming, the murder of infants by burning in a stove and several illegal operations.”  The Pensacola Journal deemed it a “light sentence” and noted “clemency was asked on account of old age.”

In the meantime, the other residents in No. 126 East 93rd Street were upstanding and respected.  Real estate operator Moses Kinzler and his family were in the house at the time and would stay into the 1920s.  Kinzler and his wife announced the engagement of their son, Herman, to Clara Frankel on April 25, 1920.

Frederick M. Scheider, Principal of Public School 74 was in the building at the time; and within a decade Thomas J. C. Martyn and his wife, Helen, the daughter of silk magnate Howell Cheney, lived here.  They welcomed a son, Howell, in February 1932.

Martyn was born in Britain and graduated from Oxford University.  He was hired by Henry Luce co-founder of Time magazine as a foreign news editor.  But in 1925 he resigned to work at The New York Times.  A year after his son was born, Thomas Martyn raised $2.25 million to start News-Week magazine.  The first edition was published on February 17, 1933.

Elizabeth M. Natter moved into the building with her two sons Frank and John around the late 1930s.  The boys’ father, Frank Michel, was killed in World War I.  As the United States entered a second world war, Elizabeth watched her sons leave to fight.  John Michel became a lieutenant in the Navy while Frank joined the Army.

In May 1942, during the first four months of the war, Elizabeth heard through a news broadcast that John’s ship had been torpedoed in the Java Sea.  On May 15 his name appeared on the Navy’s list of missing personnel.  Over a year later The New York Sun commented that “for almost fifteen months…Mrs. Elizabeth M. Natter prayed at her home, 126 East 93d street, and in St. Ignatius Loyola Church, Park avenue and 84th street, that her son, Lieut. John Joseph Aloysius Michel, was alive.”

In June 1943 Elizabeth received a startling message from a friend in, of all places, Brazil.  The New York Sun reported on Friday, June 25, that the friend had “by chance picked up a Japanese short-wave broadcast in which her son said that he had been rescued by the Japanese after being in the water fifty-six hours and [said] that his mother should not worry about him."

In 1994 the three-family building was listed at $895,000.  It was converted to one apartment on the first floor with a duplex above.  Then, in 1998, plans were filed to convert it to a single-family house for the first time in its century and a half history.  John McIntyre's handsome flat building appears little changed, its quiet facade masking the astounding history that played out within its walls.

photographs by the author
Posted by Tom Miller at 1:49 AM