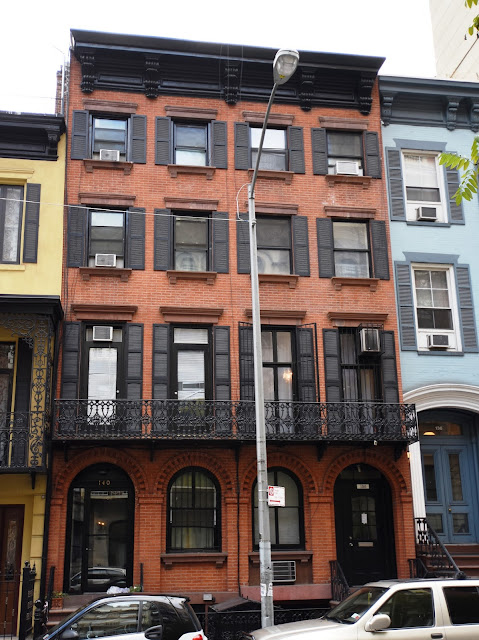 Just prior to the outbreak of Civil War two mirror-image townhouses were erected at Nos. 138 and 140 East 30th Street.  The Italianate, brick-faced homes would have been commonplace--with expected brownstone lintels and bracketed sills, and a handsome common cornice—were it not for the ornate cast iron balcony that stretched the width of both buildings and the astonishing treatment of the parlor levels.

Except for the stone sills, the architectural elements at this level were executed in brick.  Shallow pilasters with prim capitals, and arched openings with brick dentils at first appear to be later alterations.  But close inspection of the brick gives no hint that they are not original to the structure. 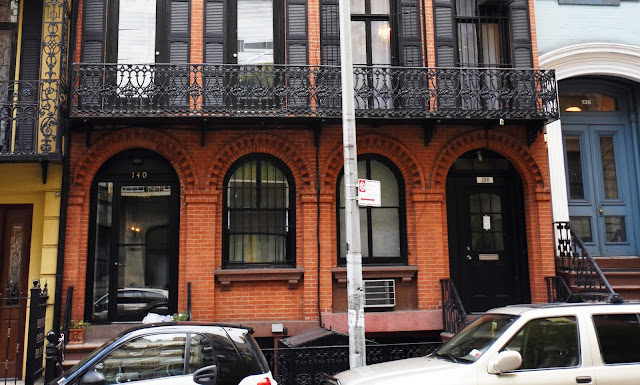 There would be a second funeral on the block just over a week later. Next door neighbor Aaron Stone died on Wednesday, April 8.  The 75-year old had been ill for a short time.  His funeral at No. 138 was held at 10:00 the next Friday morning.

On January 15, 1879 Alice Pomeroy was married to Dr. Lewis Hall Sayre in a fashionable ceremony in St. Thomas’ Episcopal Church on Fifth Avenue.  She was the only daughter of W. L. Pomeroy, head of the successful dry goods firm of Pomeroy & Plummer, and the bridegroom was the son and assistant of Dr. Lewis A. Sayer, deemed by The New York Times as “one of the prominent physicians of New-York.”

The newspaper mentioned “The old English custom of having the groom meet the bride at the altar was adopted, and when everything was in readiness for the ceremony the groom, with his best man, stepped in front of the chancel rail and awaited the coming of the bride.”

The newlyweds spent their honeymoon in Cuba, and then moved into the house at No. 140 East 30th Street.

Directly across the street was the 19th Precinct Station House.  On June 26, 1880 the Night Medical Service in the City of New-York was organized.  It provided police station with a list of “all physicians in good and regular standing” who pledged themselves to provide medical assistance in cases of “sudden sickness or accident during the night-time.”  Given the proximity of the station house, it was not surprising that Dr. Sayre offered his services to the 19th Precinct in August 1880.

The 29-year old doctor had received his medical degree from Bellevue Hospital Medical College.  Despite his reputation and his affiliation with his eminent father, Dr. Lewis Hall Sayre found himself in court in 1881 fighting a malpractice suit.

Years earlier, in September 1876, Alice met Mrs. Annie Morgan, a nervous-acting woman who held the position of housekeeper of the Travelers’ Club.  Annie Sayer later said that she “felt a sympathy for Mrs. Morgan because the latter always told such a pitiful story of her life.”

Annie, whom Alice described as “very nervous and excitable,” complained that she had “some internal trouble, and was unable to fulfill her duties as she wished to.”  Then, late in 1877, she repeatedly told Alice that she was afraid that a servant named James was trying to poison her.

Alice Pomeroy referred her friend to her soon-to-be fiancé, Dr. Lewis Hall Sayre.  Annie Morgan was examined by the doctor on January 31, 1878, and given a prescription for Strychnos nux vomica.  The medicine, which contained strychnine, was at the time used to treat a variety of maladies.  But since it was the same ingredient used in rat poison, it necessarily had to be used with caution.

Now, nearly three years later in May 1881, Annie Morgan claimed Dr. Sayre had failed to instruct her on the dosage and she had become ill.  She filed suit for $25,000 in damages—the equivalent of nearly $600,000 in 2015—charging “unskillful treatment.”

On Wednesday, March 25, the court adjourned so testimony could be taken from Alice Sayre who was confined to her bed at No. 140 East 30th Street.  Alice’s testimony was read to the jury the following day.  She had described Annie’s erratic personality and constant complaining, and said “she therefore tried to make everything as pleasant as possible for her.”

Sayre’s lawyer, on the other hand, had no intention of making things pleasant for Annie Morgan.  The Times recapped, “He attacked Mrs. Morgan as a person unworthy of belief, and reviewed the testimony going to show that she was addicted to the immoderate use of stimulants and had been discharged for wrong-doing from the post of housekeeper of the Travelers’ Club.”

The jury deliberated for an hour and a half before declaring Dr. Sayre innocent.

Before long Lewis and Alice moved into the elder Dr. Sayer’s mansion at No, 285 Fifth Avenue.  No. 140 was operated by “Mrs. Campbell” in the 1890s as a boarding house.

In the meantime, B. Lows was living at No. 138 East 30th Street.  He like almost all his neighbors was irate over the Maison Tortoni being run by Madam Chaude just feet away at the corner of Lexington Avenue and 30th Street.  In 1887 he added his name to a petition against granting the “hotel” a liquor license.

The petition explained to officials that the Maison Tortoni was not at all a restaurant or hotel, but “is in fact principally for the purpose of assignation and acts of the grossest immorality and licentiousness, and these acts are practiced nightly in this house, which is provided with separate wine-rooms, each of which is supplied with a bed, and where wines and liquors are served to the men and women frequenting the place.”

In the rear of both properties were private carriage houses.   Unlike Dr. Sayre before her, Mrs. Campbell had no need for the stable and in April 1895 she leased it to the police precinct across the street for $50 a month.  The station used it for the “stabling accommodations for the Patrol Wagon Service.”

B. Lows had moved on by now and No. 138 was home to Robert B. Lloyd, a retired building contractor.  Lloyd and his partner, Thomas Asson, had been responsible for the construction of many of the mansions of Fifth Avenue and other fashionable areas of the city.   He had built Niblo’s Garden, the popular Broadway theater near Prince Street; and had done the renovations on the mansion of eccentric Peter Goelet on Broadway and 19th Street.

In September 1896 Robert Lloyd, aged 84, died in the 30th Street house.  His funeral was held in the parlor on the afternoon of September 11.

Four days later police were knocking on the door of Mrs. Campbell’s boarding house with a warrant for the arrest of William Marshal Campbell Callender.  The following day The Sun reported that his wife, Adelina Louisa, charged “that her husband has been guilty of improper conduct at the Hotel St. George, Brooklyn, with a woman known as Ella Clark and as Ella Johnson.”   After doing some detective work on her own, she had learned from staff of the hotel that “her husband and Ella Clark occupied a suite of rooms at the hotel and ate together and were heard in the halls of the hotel calling each other ‘dear,’ ‘darling,’ ‘pet,’ &c.”

The Callenders had married on June 25, 1890; but William had left Adelina in 1894 and she claimed he had not given her any money “except 20 cents and 50 cents at a time.”  Now she was concerned he was leaving town and she had to act fast.  “Mrs. Callender also says that her husband is a man of ability and inventive genius, and is about to sell a patent for $10,000, and to leave the State for Europe or Colorado,” said her lawyer.

The philandering William Marshal Campbell Callender was unable to furnish the $1,500 bail and was locked up in the Ludlow Street Jail.

It would not be the last time Mrs. Campbell found police on her doorstep.   In January 1898 she rented a room to 85-year old James Arnold, who told her he was a doctor.   What Mrs. Campbell could not have known what that Arnold was not a physician, and he had a tradition of not paying his landlords.

Prior to moving into No. 140 East 30th Street, he had been boarding with Michael C. Moroney at No. 117 East 46th Street, who charged $8 a week for room and board.  Moroney’s four-year old daughter, Margarita, had been paralyzed for 18 months.  Arnold hold him he would cure the girl in payment for his rent.

“He went through some hocus-pocus by making passes over her eyes, twisting her toes and pulling her legs,” Moroney later told police.  “He said that made her much better and that she would be cured in a short time, but I thought he was a humbug and when he went out yesterday I followed him and when he engaged board with Mrs. Campbell I caused his arrest.”

When Arnold appeared before Magistrate Olmsted on January 30, 1898, the judge said “From the evidence I believe you are a boarding house beat.”

Arnold countered “I beat death, but not boarding houses.  I am a magnetic healer, saturated with magnetism.”

The judge was not impressed.  “I believe most of your magnetism is in your tongue, to be used in boarding houses.”  He held Arnold on $500 bail for trial.

Later that year another boarder would meet a tragic end.  Mary Whalen stepped off streetcar in Woodside, Long Island, on Friday, November 25, having visited friends there.  The 27-year old woman needed to be on the opposite side of the train tracks, but the crossing gate was down because of an approaching eastbound express train.

Noticing that Mary seemed to be considering a bolt across the tracks, the flagman warned her not to attempt beating the train.  The train's engineer, Philip Taite, saw the flagman motioning to the woman to stop and he blew the train whistle as a warning.

“She hesitated for a moment on the westbound track,” reported The Sun, “but proceeded, and had just stepped over the last rail of the eastbound track when the locomotive struck her.”  She was killed instantly.  Rather astoundingly, Philip Taite was arrested for her death.

It appears that by the turn of the century the two houses had switched roles.  No. 138 was being operated as a boarding house and No. 140 had returned to a private residence, home to a Dr. Thompson.

On August 2, 1902 a man named Arden was living in No. 138 when he placed an advertisement in the New-York Tribune looking for a job.  “Attendant, companion, valet, to an invalid gentleman; experienced; presentable, well mannered, exceptional city references which will bear investigation.”

Four years later Henry A. McConkey was living in No. 138 when he was appointed a Commissioner of Deeds.  The impressive-sounding position was a rather mundane civil servant job similar to a Notary Public.

Dr. Thompson was still in No. 140 in 1907; followed by veterinarian Dr. James E. Delaney and his wife, the former Annie Hemsworth.  A year after the death of the 54-year old veterinarian in the house in June 1920, Nos. 138 and 140 were sold as a package; then quickly resold.

No. 138 was leased by Professor James J. Gorman and his family.  In November 1930 he bought the house from Justine Boissonade.

Moving into No 140 was Maude O’Farrell Swartz who made history by becoming the Secretary of the New York State Department of Labor in January 1931.  A prominent labor activist, she had been president of the Women’s Trade Union League from 1922 to 1926.  Her long-time partner and companion, Rose Schneiderman was a prominent labor union leader credited with improving the working conditions for millions of workers.

Maud Schwartz’s predecessor had been notoriously inactive as Secretary of Labor, but she expanded the post’s activities among women workers and increased its importance.  She suffered a coronary thrombosis in January 1937, and died a month later.  Her funeral was attended by Eleanor Roosevelt and Frances Perkins.