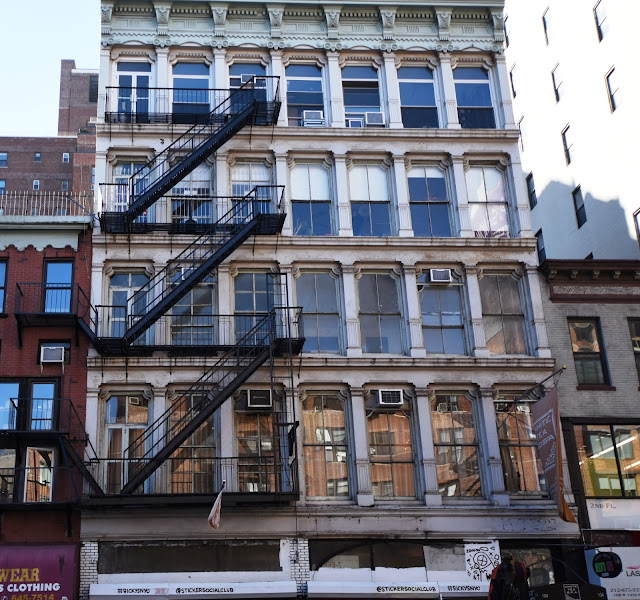 In the years preceding the outbreak of Civil War, the block of West 14th Street between Sixth and Seventh Avenues was lined with brick or brownstone-faced residences.  At the time No. 104 was home to John A. Nichols, Professor Natural Philosophy at the Free Academy of the City of New York.  He earned $1750 a year in 1853; the equivalent of about $55,000 in 2015.

Two decades is more than time enough to radically change a neighborhood in New York City; and by 1875 the once-residential West 14th Street had become the center of the retail furniture district.  That year the already-successful George C. Flint & Co. leased the former Nichols residence and the house next door at No. 106, from owner John A. Hadden.

Two years earlier Hadden had commissioned the architectural firm of William Field & Son to erect a high-class commercial building nearby at Nos. 39-41 East 13th Street.  He now hired the firm to erect a new store for George C. Flint & Co.   The resulting structure, completed in 1876, was a near match to the 13th Street building.

The Italianate cast iron facades shared identical pilasters with knee-high fluting, shallow cornices separating each floor, and attractive and unusual cusps at the upper corners of each opening.  But No. 104-106 West 14th Street flexed its individuality above the fifth floor.  Here artistic brackets upheld the cornice and a wonderful scalloped and decorated architrave mimicked the Victorian furniture sold by George C. Flint & Co.

When George C. Flint & Co. announced its opening at Nos. 104 and 106 West 14th Street on April 10, 1876, it described itself simply as “Manufacturers of Good Furniture at Low Prices.”  It would not be long before the firm realized it had underestimated the floor space it required.  By December the firm leased the house next door at No. 108 and hired architect Richard C. Jones to build an extension to the rear and alter the pitch of the roof, at a cost of $3,000.

Neither the press nor the furniture-buying public seemed bothered by the architectural disparity between the two buildings.  On October 26, 1887 The Sun focused only on the furniture when it reported “The George C. Flint Company’s display of furniture at their warerooms, 104, 106, and 108 West Fourteenth street, is remarkable both for its rarity and the elegance of the designs.  In parlor furniture they have everything, from the many designs in carved antique oak, mahogany, sycamore, and olive woods, to the light and fanciful sets in white and gold, of the styles of Louise XIV, XV, and VI, with gilded spindles of lancewood and pretty gossip chairs.”

A European furniture designer, visiting New York at the time, was taken with the Flint building.  On May 19, 1888 Architecture and Building published his letter to the editor which said in part “Perhaps the store of least pretentious exterior is that of the Geo. C. Flint Co. of Fourteenth street, near Six avenue…Yet the show-rooms of this old-established firm are most extensive and the way the vast stock is assorted on the different floors is admirable.”

The writer was impressed impressed not only with the display of the furniture—arranged by floor as bedrooms, parlors, etc.--but by the demeanor of the staff.  “Another commendable feature of Flint’s store is that intending purchasers may visit these show-rooms without fear of being molested, so to speak, by idle salesmen.”

George C. Flint also sold accessories, like tapestries and carpeting, by other makers, many of them imported.   But the bulk of its furniture was designed and manufactured in its West 19th Street factory. The company marketed the fact that, as the manufacturer, it eliminated the middle-man.  Its tag line was “Buy of the Maker.”

Customers indeed had a wide variety of prices and styles from which to choose.  An advertisement in The Evening World on October 28, 1889 boasted of “some twenty patterns” of parlor suits, “exceeding tasty, so very novel and elegant.”  Prices ranged from $75 to $150—the highest price equal to about $4,000 today.  An even broader selection was offered by the more than 50 different bedroom suits “in ash, natural cherry, antique oak, mahogany, &c, at from $18 to $600.”

Like all successful furniture dealers, George C. Flint & Co. kept abreast of latest trends.  On April 2, 1892 The Evening World noted “It is the fad of the time to affect furniture of the long-ago period of Louis XIV, Louis XVI, and the turbulent days of unfortunate Marie Antoinette.  And in those styles it must be said that the George C. Flint Co., 104 West Fourteenth street, display a wondrously complete line.”

The newspaper felt one set stood out.  “A particularly beautiful chamber set in decorated, enameled white and gold strikes one’s vision with its soft cream tints harmoniously blended.  Such a suit of interior adornments would transform miladi’s boudoir into a dream of delight.”

A year later the New-York Tribune reported “There is a rage this season for inclosed bric-a-brac cabinets with heavy plate-glass shelves, and these are found in gold and mahogany.  One piece is a reproduction of the sideboard used in the Prince of Wales’s out-of-town house at Sandringham.  There are also some special patterns in bedroom and parlor furniture.”

By the time the Tribune made its comments, the furniture district was relocating from West 14th Street to West 23rd Street, at the opposite end of the Sixth Avenue Ladies’ Mile shopping district.  George C. Flint & Co. was busy erecting a new showroom building on West 23rd Street at the time.  On August 22, 1894 The Evening World reported on the new George Flint building. “What is said to be the finest and most complete furniture store in this country was opened to the public for the first time this morning at 43 and 45 West Twenty-third street.”

Undeterred by the migration of others, Brooklyn furniture dealer Cowperthwait & Co. branched into Manhattan by taking over the Flint leases on 14th Street.  The firm had been in business since 1807.  Now The Evening World explained “The business in Brooklyn has grown to such an extent that a New York City house became an absolute necessity.”

Its showroom opened on September 12, 1894 and The New York Times urged customers to visit.  “There are no duplicate pieces of furniture in the establishment.  The store is, in fact, a great exhibition place.”

Like Flint, Cowperthwait & Co. offered a broad range of styles and prices.  The Times noted that parlor suites, for instances, ranged in price from $25 to $300.   The third floor was dedicated to floor coverings including, “Wilton, Moquettes, Axminster, body Brussels, and ingrain carpets, rugs, and tapestries, linoleum, and oilcloths.”

As the article pointed out, only samples were housed in the 14th Street building.  Actual stock was shipped from the company’s immense factory and warehouse on West Street.   On December 16, 1894 The New York Times explained that “The huge furniture vans of Cowperthwait & Co. of 104 West Fourteenth Street are stored over night in a building a short distance from the firm’s stores.  Before daylight each morning a dozen men run the trucks down an inclined plane to the street.”

On that morning at 6:00 all the vans had hit the street except for the “Elephant” van.  It took four men to control the brake attached to the axle of the mammoth vehicle.  John Peterson stood in front to guide the van.  Then near-tragedy struck.

The New York Times reported “When half way down the plane the wheels clipped and Peterson was thrown.  The forward wheel passed over his legs and threw his body in such a position that his head lay in the pathway of the hind wheels.”

The panicked, injured man felt the rear wheel make contact with his neck as the truck slowly descended the ramp.  “He grasped the wheel, and by an effort threw himself forward and to one side just as the brakes gave way and the heavy van plunged forward, the hind wheel just grazing him.”

Having escaped death by a matter of seconds and inches, Peterson was taken to New-York Hospital where it was found his right leg was fractured in two places.  When Cowperthwait management heard of the accident, it telephoned the hospital instructing them “to give Peterson the best of care.”

The Times opined “The unfortunate man’s Christmas will be as happy as possible under the circumstances.”

Cowperthwait’s success was due, in part, to its extending credit to families who otherwise would not be able to afford new furniture.  The New-York Tribune, on February 28, 1897, said the policy “has always been predominate in this establishment” and was a “keystone of its success.”  The newspaper added “And the tens of thousands of paid-up accounts upon the Cowperthwait Co.’s books, many of them extending over years, represent and stand for just that number of homes whose existence the liberality of this firm has made possible.”

Credit, said the Tribune, “is not an 'open sesame’ to rogues, for nowhere are they detected more quickly, but to honest folk is extended every consideration and accommodation, for this firm’s credit system is designed for such alone and amply safeguarded against impositions.”

By the outbreak of World War I Cowperthwait had abandoned West 14th Street.  The building became home to the Knickerbocker Mail Order Company until it was taken over by the U. S. Government as military barracks.  The War Department Annual Reports, 1919 noted “Barracks at 104-106 West Fourteenth Street were remodeled for the Division of Military Aeronautics.  A heating system to serve these barracks was also authorized.”

Peacetime returned the former furniture store to commercial use.    In 1925 architect Jacob Fisher remodeled the interior for the School for Printers’ Apprentices on two floors and printing operations on the fourth and fifth floors.  The ground floor was remodeled for stores. 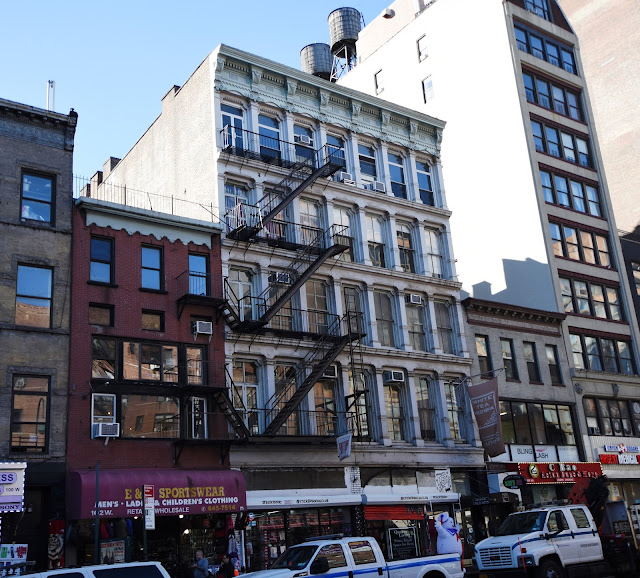 Today a mish-mash of commercial awnings and storefronts crowd the ground floor.  Although the upper stories could use some sympathetic attention, William Field & Son’s cast iron façade is little changed.  And the wonderful decorations above the fifth floor thankfully survive.

photographs by the author
Posted by Tom Miller at 4:23 AM