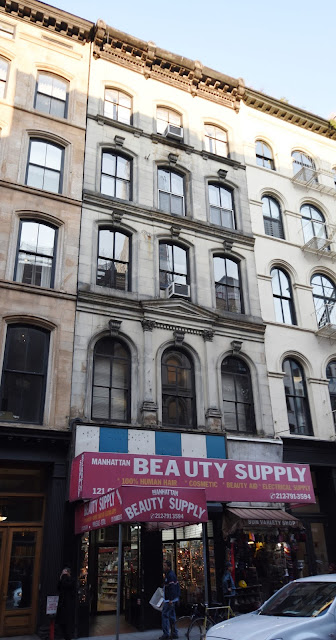 When Nicholas Gilbert purchased the property at No. 121 Chambers Street in 1835, the area was still a respectable, residential one.  At the same time, he bought the three lots directly behind, at Nos. 103 through 107 Reade Street.   Gilbert and his family moved into the Chambers Street house; but would not stay appreciably long.

By Gilbert’s death in 1851 his former home was being run as a boarding house, and the three Reade Street houses were rented to blue collar workers and servants.  By 1860 the area was seeing the rise of handsome commercial buildings and lofts.  That year Gilbert’s two sons divided up the property and set about to replace the old houses with modern money-making business buildings.

Frederick Gilbert, who was a ship chandler by trade, took the family home and the house directly behind it at No. 103 Reade.  James took Nos. 105 and 107 Reade Street.   They hired an architect whose name has been lost, to design two matching stone buildings—Frederick’s running through the Chambers Street-Reade Street lot; and James’ lining up next door.

Frederick Gilbert’s No. 121 Chambers Street was completed in 1860, several months before the Reade Street structures.  Like his brother’s double-wide building, it was an Italianate beauty.   Sandstone cornices defined the second and third stories and the openings sat within carved frames, all but the topmost story ornamented with heavy scrolled keystones.  The middle bay of the second floor was highlighted by a temple-like projection of engaged Corinthian columns and a classical pediment. 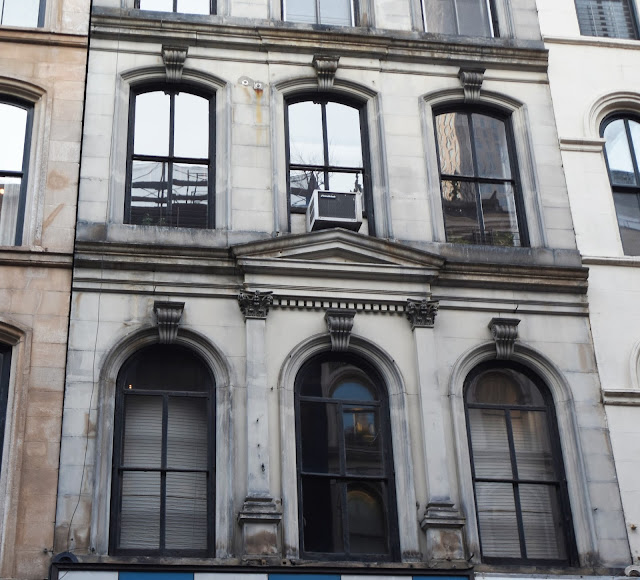 A trio of graceful arches separated by engaged Corinthian columns and pilasters created the cast iron storefront.  The Reade Street façade was slightly subdued, treated as the one-third of the design that included James Gilbert’s building.

Storrs Brothers had been doing business in the ground floor of the former Gilbert house in 1859.  Now with the new building completed, the firm moved back in.  Royal, Augustus and Charles Storrs all listed themselves at the address as selling “fancy goods,” including watches and jewelry.  But Joseph W. Storrs focused on the sale of “pistols.”

Among the other tenants listed upon the building’s opening were dry goods merchants Casherie & Davis, and at least four other dry goods dealers: William H. Davis, John C. Dickinson, Aaron D. Fenton and Hiram S. Francis.    Casherie & Davis had hardly moved in before they signed their names to a letter to the Mayor recommending the city consider “Mr. Smith’s” new street cleaning process.  It called the present method “inefficient and extravagant,” and suggested Smith’s “street-sweeping machines” would “add largely to the health, comfort and prosperity of our metropolis, and eventually prove a saving to tax-payers.”

On February 27, 1860 Irving J. Cook, a slippery salesman from Arcade, New York, sold Storrs Brothers $267.50 in merchandise, apparently jewelry.  After he returned to the sleepy village, the men realized they had been hoodwinked.  It took a detective a full year to find Cook, and on Saturday February 16, 1861 he was brought back to New York City by Detective Slowy, to answer charges of fraud “by means of false representations.”

Irving J. Cook vigorously proclaimed his innocence and reminded the justice that Nathaniel G. Holton, a clerk of Storrs Brothers, had first ascertained “his standing as a businessman.”  He explained to the court that in the period since the sale “he had been unfortunate” and was compelled to declare bankruptcy.

Two months later the first shot was fired in the Civil War.   Storrs Brothers got involved in the war effort as Manhattan businesses helped with the donations of food and supplies to the troops.  In 1864 a massive incentive was underway to send Thanksgiving dinners to the front, including 50,000 turkeys.  Storrs Brothers focused on apples and invited donations at their store.  The Times, on November 3, announced “We learn that a movement has been inaugurated to send one thousand barrels of apples to the army on Thanksgiving.  Such a scheme is worthy of the liberal and loyal merchants of New-York, and should certainly be successful.”

By 1875 George Place & Co. was in the building, a manufacturer and seller of drilling machines, lathes, planers, and other equipment. The firm drew the wrath of The Sun in 1883 when the newspaper sought to uncover bureaucratic waste.  An investigative journalist was sent to the Norfolk Navy Yards and on July 6 the newspaper reported on his findings in a front page article.

The newspaper complained that navy yards slated for decommissioning “are full of” similar unused machines; and now were to be sold as junk.  “The new machines were purchased of George Place, at 121 Chambers street, New York.”

At about the same time the cigar manufacturer Howard Ives was doing business in No. 121 Chambers Street.  On Friday, August 21, 1885 his bookkeeper, Duncan S. Wylie, stopped by his broker on Wall Street and purchased 1,500 shares of Boston, Hartford and Erie Railroad Company stock.  As he left the office, he slipped the envelope with the stock certificate into the pocket of his cut-away coat.  Or so he thought.  The envelope fell out of his coat somewhere between Wall Street and the Chambers Street office.  Panicked, Wylie placed an advertisement in The New York Times the following day on the slim chance that the finder would be honest.

His hopes were answered.  A messenger boy, William Dunn, had found the envelope and turned returned it to Ives.  “Mr. Wylie rewarded Dunn,” reported the newspaper.

George Place was still in the building in 1888.  By now other machinery and hardware concerns were moving in.  Bayles Brothers, commission dealers in hardware, operated its offices here; and C. J. Stebbins, listed as “nail merchant” was in the Reade Street side of the building by 1892. 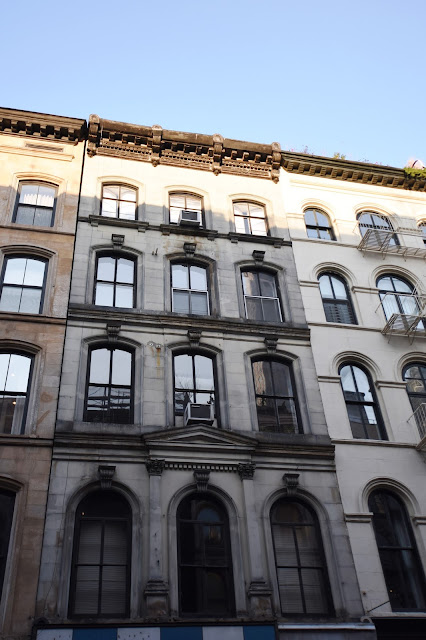 In the first weeks of 1893 the signs of a serious impending financial depression were looming.   John W. Lauterbach, a 54-year old German immigrant, had been doing a highly-successful import business of baskets and willowware for 30 years.  His business took up the entire top three floors from Chambers Street through to Reade Street.

Those associated with Lauterbach said his business had sometimes amounted to $200,000 a year and “he accumulated a handsome competence.” The New York Times noted “He lived with his wife and four children, the youngest a lad eleven years old, in a comfortably-furnished house, which he owned, at 99 Webster Avenue, Jersey City.”

But in the past few years he had told his wife often that his business was decreasing.  It changed his personality, which grew “morose and melancholy.”  It all came to a head on the morning of February 4, 1893.

Upon arriving at his office he asked the bookkeeper, Water Daberautz, for the balance sheet for 1891 and 1892.  It reflected a loss of $5,026.  He sat in his third floor office for a while, and then suddenly stood up, remarking to Daberautz “I’ll make a change in this soon.”  He went to the top floor where his private office was located.

When the only clerk working on the 5th Floor went downstairs at around 11:30, Lauterbach was sitting by a window smoking a cigar.  A few minutes later John J. Curran, an inspector with the Street Cleaning Department, looked up to see Lauterbach standing on the narrow sill.  A crowd quickly gathered and the people shouted “Don’t jump!”

The New York Times, the following day, reported that Lauterbach paid no attention to the shouts, but partly closed the window, stood for a few moments on the sill “with his right hand clenched above his head and his left holding on to the window sash, and then they saw him jump.”

The newspaper related “He struck the sidewalk all in a heap, rolled over, and lay quiet.  Death was undoubtedly instantaneous.”  Lauterbach left his wife an estate of approximately $25,000 (a little more than $675,000 in 2015).

It may have been that downturn in the economics that prompted Charles J. Stebbins to diversify.  By 1895 he had branched out, deciding to get into the rabidly popular bicycle craze that was sweeping the nation.  Before the turn of the century his nail business would be totally eclipsed by bicycles.  In February 1896 The New York Times noted that Stebbins, who was already the agent for the Syracuse, Empire, Montauk, Silver King and Silver Queen brand cycles, “has taken the general Eastern agency for the sale of the Anchor automatic-locking bicycle stand.”

By March 1 that year Stebbins had two branch bicycle shops—one in the Bronx and another in Brooklyn.  He also distributed the weekly newsletter War Paint, published for cycling enthusiasts by the Syracuse Cycle Company.

That spring the Syracuse Bicycle Company released a new model bike with the alluring name “Crimson Rims.”  The Times alerted the buying public “Mr. Stebbins is getting the ‘Crimson Rims’ well before the riding public of the metropolitan district.”

The street level space that had housed the Storrs Brothers fancy goods emporium had been converted to a saloon in the last decade of the 19th century.  In June of 1901 it was leased to the Otto Huber Brewery.  “Tied” saloons were a popular experiment at the turn of the last century.  By running the taverns themselves, breweries were able to narket only their own brands.  The saloon at No. 121 Chambers Street was here at least through 1903.

After suffering abuse and neglect through most of the 20th century, the buildings of the Tribeca area drew attention as the neighborhood was reborn.  Trendy shops and cafes sprouted in former factory spaces and vast warehouse and commercial lofts were renovated as residences.

In 1992 the top three floors of No. 121 Chambers Street were converted to apartments.  The storefront of the Chambers Street side has been brutally altered; however the ground floor of the Reade Street buildings is relatively, and surprisingly, intact.  The handsome grouping is a vivid reminder of the days when Chambers and Reade Streets were changing from residential to business interests.