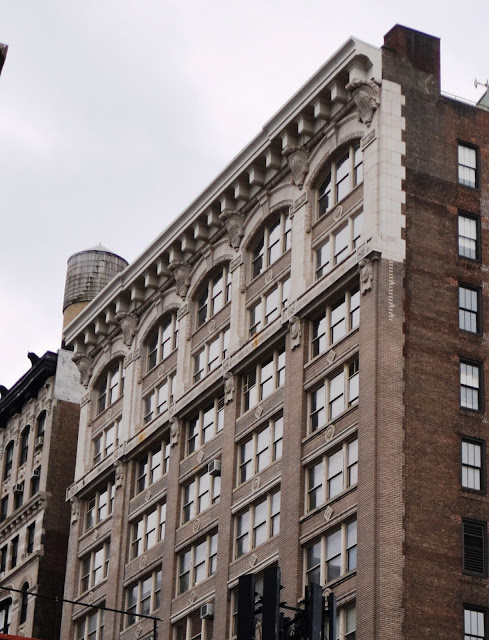 As the 19th century became the 20th, developers Samuel and Henry Corn were heavily responsible for the transformation of Manhattan’s residential neighborhoods south of 34th Street into vibrant commercial zones. Working together or separately, they bought up groups of once-proud homes and replaced them with modern loft and store buildings.

In December 1899 two receptions were held in the parlor of No. 54 West 21st Street to introduce Mary Mortimer to society.   Mary’s father, Henry Coit Mortimer, was described by one publication as a “gentleman of the old school.”  There would not be many other glittering social functions in the Mortimer house, however.

Already Sixth Avenue, just steps away, was lined with massive emporiums that earned the thoroughfare the nickname the Ladies’ Mile.  While Mortimer and one or two of his neighbors held out as long as possible, the decline of the once fashionable West 21st Street block had already begun.

Three months later The New York Times interpreted the move as a signal for further development of the area.  “That there is good reason to anticipate a further increase in the demand for store and loft space in the great mercantile district south of Twenty-third Street is apparent from the fact that no less keen an observer of conditions in that section than Henry Corn is about to engage in another large undertaking there.”

The newspaper also commented on the ambitious construction schedule—less than eight months from start to completion.  “The old buildings on the plot will not be torn down until May 1, and the new structure will be ready for occupancy on Jan. 1.  In view of some other recent records, this is not a remarkable achievement, but it is another illustration o the fact that with modern methods one of these huge structures may be put up almost as rapidly as the average dwelling.”

Corn regularly chose from among three esteemed architects—Alfred Zucker, Robert Maynicke and Louis Korn.  For this latest project he turned again to Robert Maynicke.   The firm of Maynicke & Franke designed the neo-Renaissance style structure with a sparsely-ornamented limestone base three stories tall.  Vast Chicago-style windows--a Midwestern innovation--admitted a flood of sunlight into the second and third floors.

The seven-story midsection was clad in beige brick, ornamented by a foliate-carved bandcourse with rigid pendants, stone medallions and diapered brickwork.  The topmost two stories were again clad in limestone.  Here was the building’s most eye-catching feature—six stocky cartouches in the form of shields carved with American stars and stripes.

Six months into construction Lewis, Hurwitz & Co. leased “for a long term of years,” the entire second floor—11,000 square feet.  The Real Estate Record and Guide pointed out that on October 23, 1909, that the entire building was now leased.

One month after the building opened Henry Corn moved on to other projects.  In February 1910 he traded the new structure to the American Real Estate Co. for 33 vacant lots in the Inwood section, far to the north.  The deal translated to about a half-million dollars.

The vast loft spaces initially housed garment factories.  The size of their operations is reflected in the number of workers who toiled at sewing machines and ironing boards.  In 1913 S. Bernstein & Co., makers of “cloaks and suits,” employed 75 men, 16 women, and 2 children between 14 and 16 years old; as well as four office workers.  That same year Blauner Bros. & Co. employed 152 men, 121 women and 10 office workers in the manufacture of “cloaks, suits and skirts.”

Along with other garment makers here in 1915, such as the Genet Petti Coat Company, the misses’ and children’s dress house of S. Phillips & Co., and the Levison Bros. & Nevins firm, was the newly-arrived handbag firm of Lefkowitz & Fisher.  Among the company’s offerings was the leather “Gretchen” money belt which kept a lady’s cash safe from street thieves.

Throughout the first decade of its existence the building continued to house mostly garment factories.  Nevertheless, a few unrelated firms moved in, like the Joseph Roth Manufacturing Company which made stuffed animals and toys here from around 1913 through 1916.  In 1917 there was a total of approximately 1,000 workers in the building.

The wholesalers of No. 54-62 West 21st Street routinely touted the location as a selling point.  Rosenschein Bros. advertised “Our location and economy is your advantage, and Morris Millard’s slogan was “Merchandise brings them to Twenty-first street.”

Like so many of the tenants, Morris Millard manufactured cloaks and suits here.  Among his many employees in 1921 was shipping clerk Joseph Kaplon.  His position offered the 22-year old the unusual opportunity to smuggle goods out of the building.

Little by little Kaplon pilfered garments which he sold to Jacob Herzog whose Majestic Cloak Company was a few blocks north at No. 333 Seventh Avenue.  After a year and a half, on February 3, 1923 Kaplon was caught with two dresses valued at $75 each.  In his pocket was a bank book that showed regular deposits of $100 and $200.  The amounts—upwards of $2,500 each today—could not be explained by his salary.

Joseph Kaplon was charged with grand larceny.  During his confession he identified his buyer.  Jacob Herzog was reportedly shocked and astounded.  “Herzog said Kaplon had left the suits with him to look at and he did not know they were stolen,” reported The New York Times on February 7, 1923.

At the time of Kaplon’s arrest the garment district was moving north of 34th Street.  While some apparel firms held out—the Elk Knitting Company would stay at least until 1931—a new sort of tenant was moving into the building.

The Turbax Corporation was here by 1923.  The firm manufactured a wide range of washing machines.  That year The Electrical World reported it had “developed a washing machine, ‘Turbax,’ which can be placed in a stationary tub, wash boiler, or bathtub.”  Other firms to move in within the decade were the General Slicing Machine Co. and the Adams Grease Gun Corp.

The building was the scene of a dangerous shoot-out on February 27, 1925.   Policemen responded to a burglar alarm that night.  Unable to gain access in the front of the building, they went to the rear and began climbing the fire escape.

When Policemen Hyman Kasten and William Quinn reached the third floor landing, they saw three men above them at the fifth and seventh floors.  As they pulled their guns, the robbers began firing at them.

“More than a score of shots were fired and in the meantime policemen from near-by posts surrounded the building,” reported The New York Times the next morning.  While cops guarded the entrances, plain clothes detectives began climbing up a second fire escape in hopes of heading off the thieves.  They soon had to duck into a window when they were mistaken for crooks by the cops under fire.

Eventually the robbers ran out of ammunition and jumped into a window where two were found in a lavatory by Kasten and Quinn.  “Underneath their overcoats they wore women’s coats and their pockets were stuffed with socks, silk scarfs and other articles.”

The robbers had apparently been in the building for an extended period.  “Examination of the building showed that rooms on the third, fifth, sixth and eleventh floors had been entered and a considerable quantity of merchandise of the cheaper variety was scattered about the corridors.”

One of the thieves escape, wounded.  The Times said he “evidently climbed up to the roof and then came down the stairway inside the building for a trail of blood showing that he had either been wounded or else cut himself on the window glass, led to the front door.”

In 1964 the first printing firm to lease in the building, Superior Tag and Label Company, took space.  Eight years later a printing company here would find itself in trouble with Federal agents.  On June 27, 1972 The New York Times reported that 10 men had been indicted in Federal District Court on charges of “counterfeiting almost a million dollars in $10 bills and 8-cent postage stamps.”  The indictment alleged that on April 22 that year $500,000 in counterfeit stamps were printed in a plant at 54 West 21st Street.”

On March 17, 1978 an armored truck of the Armored Courier Service pulled up on front of the building making a payroll delivery to one of the companies here.  The guards entered the building with the sack of money; but were astonished when they walked out to find that the truck with its $149,000 in cash was gone.

The lone driver, Alterber Freedman, had been overpowered at around 9:30 in the morning.  Police found the empty truck a block away on 22nd Street between Fifth and Sixth Avenues.  About an hour later the driver was released unharmed in Queens.

As the Chelsea and Flatiron neighborhoods saw a rebirth in the 1980s, so did No. 54-62 West 21st Street.   In September 1988 55-year old Gene Young opened Chelsea Billiards in the former retail space at street level.  He told reporters he wanted his 15,000 square foot parlor to “improve the image of the game.”  To do so he carpeted the floors and brought in 44 high-end Brunswick tables.

In the meantime, the former factory spaces upstairs were being taken over by a new type of tenant, as well.  By 1995 Acanthus Books was here, specializing in rare and out-of-print reference books on antiques, the decorative arts and architecture.”

In June 2000 Chelsea Billiards became Chelsea Bar and Billiards; the single word in the name change signifying a noticeable difference.  The New York Times noted it had become “the city’s first billiard parlor with an emphasis on food.”

The following year it became Slate, described by the Native’s Guide to New York as “Not just a pool hall, but a fancy Middle Eastern restaurant as well.  Most pool halls now serve beer and burgers, but this is a notch above.” 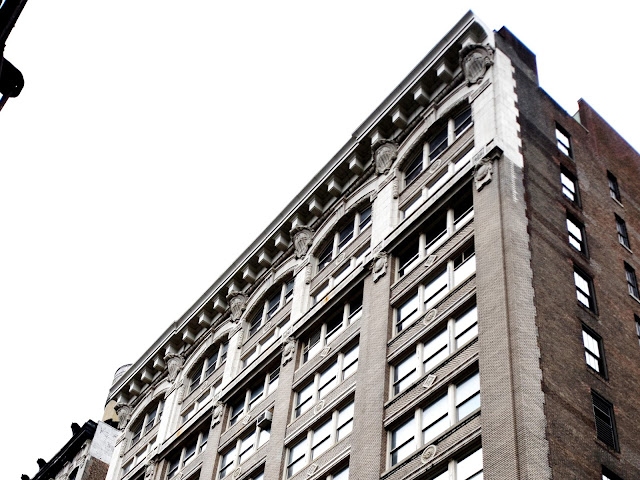 In its more than a century of existence, Maynicke & Franke’s handsome loft building escaped major alterations—even the storefronts entered by pool-playing diners appear original.   Unfortunately, rushing New Yorkers rarely, if ever, glance up to take in the patriotic stone shields below the cornice.