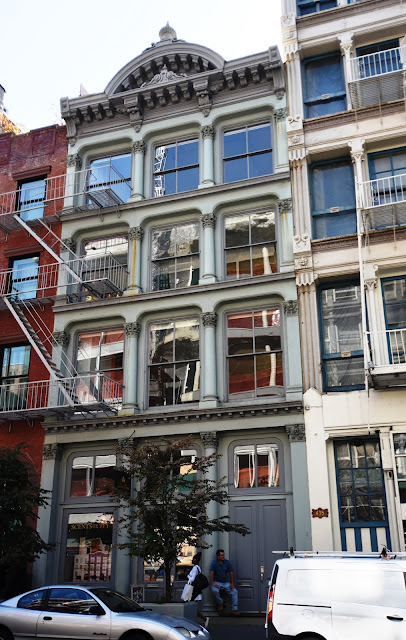 In 1827 Lambert Suydam planted a grape vine in the garden behind his new three-and-a-half story home at No. 433 Broome Street.  In the years following the War of 1812 development in the new suburb was sluggish but by the time Suydam’s brick home was constructed in the 1820s, Broome Street was seeing a building boom.

Like his neighbors, Suydam was well respected in the community.  A member of what The New York Times would later deem one “of the oldest Knickerbocker families,” he could trace his roots in America to 1663.  A son, Lambert Jr., was born to him and his wife, Eliza Lawrence Suydam, at about the same time he planted his grapevine.  Years later the boy’s obituary would mention that he was born “in the family homestead on Broome Street, then part of the fashionable residence section of old New York.”

On Tuesday, September 7, 1830 the New-York Horticultural Society judged “a very large collection of Fruits, Plants, and Flowers” at its annual Festival. The New-York Farmer commented on Lambert Suydam’s submission.  “A basket of very delicious Grapes, the White Sweet-water, from a vine planted in 1827, and which has borne this year upwards of a hundred clusters.”

It was somewhat fitting that the Suydam residence became home to Sebastian C. Dortic within the next decade.  Doric was a partner in Dortic & Castillon, an importer and seller of “brandies, wines and fruits,” doing business at No. 102 Front Street.  His family would live in the Broome Street house as least from 1841 through 1843.

But by 1846 the house changed hands again, this time to nobility.  William O’Brien was born in 1768 in Ireland and was Lord O’Brien, Earl of Inchiquinn at the time of the Irish Rebellion of 1798.  A Catholic, his title and estate had been confiscated by the British and turned over to the Protestant branch of his family.

O’Brien sailed to America on a ship commanded by Captain John Stevens.  Also on the vessel was Stevens’ half sister, Eliza West.  The voyage was long enough for romance to spark.  On January 27, 1810 the couple was married—despite the remarkable differences in their ages.  O’Brien was 42 and his bride was 15.

William O’Brien became a successful insurer of ships and the Broome Street house was a center of entertainments.  Decades later, in 1870, Joseph A Scoville remembered “He was very jovial and social, and held his levees regularly once or twice a week.  His house was always open to his friends.  No Irish gentleman of any note ever passed through New York without making his appearance at the residence of Mr. O’Brien in Broome Street.  The best wines and liquors in the United States could be found in perfection upon Mr. O’Brien’s good old-fashioned, mahogany sideboard.”

The couple had several children, one of whom, William Jr., went into business with his father at No. 33 Wall Street.   William O’Brien died in the house on Monday August 31, 1846, at the age of 78.  His family remained in the house for several years and would retain possession of it for decades; but by the last years of the 1850s it was converted to the Broadway House Hotel.

The former house was still a hotel on July 7, 1868 when a small fire broke out at around 10:30 p.m.; but a year later O’Brien family began renovations to convert it to a modern loft building, in keeping with the trend overtaking the neighborhood.  The attic was raised to a full floor and a cast iron façade replaced the former Federal-style front.  No. 433 Broome, with its clean lines and engaged columns with ornate Corinthian capitals, was little different from many of the cast iron-fronted structures that would fill the neighborhood within the next decades; however its ambitious cornice and pediment set it apart.

Here graceful scrolled brackets (two of them cleverly sitting sideways) upheld the cornice.  The arched pediment was filled with shallow brackets and a handsome stylized antefix.  Above it all was an lovely bulbous finial. 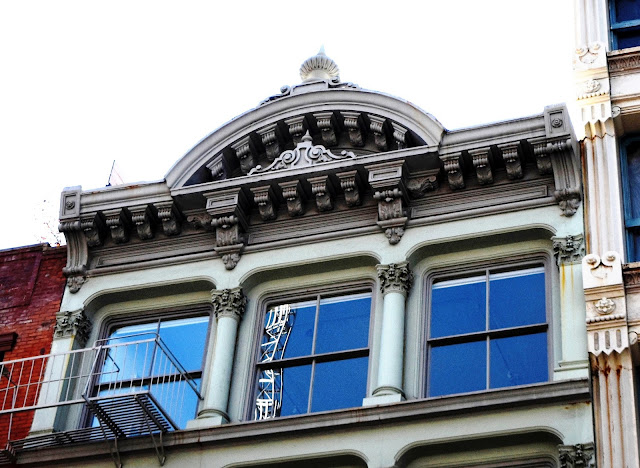 In January 1876 the Millinery Trade Review reported that “Clapp, Braden & Co. have just received all the latest novelties in artificial flowers from Paris, including new styles and colors…Mr. J. J. Braden, being a resident of that city, superintends in person all commission entrusted to said firm.”

By 1893 suit and cloak maker Philip Bouton was in the building.  That year he advertised for a dress form.  “Figure Wanted, bust measure 36.”  He would remain here for several years.

In 1887 John O’Brien had leased the first floor and basement to William Brenglemeyer whose restaurant would be a familiar spot for local businessmen for years.  It would become part of a murder mystery in 1894.

Gottlieb Grob worked for Brenglemeyer as a cook, earning $7 a week.   From this salary he managed to save a small nest egg in the Bowery Savings Bank.  Grob, described by The Evening World as “an inoffensive German about forty years old,” lived in a tenement apartment in the rear of No. 221 William Street.   He had lived alone here for over a year, after being granted a divorce from his wife who had “eloped with a man named Christ,” according to The Evening World.  Among his few possessions was his pocket watch.

Grob’s apartment could be seen from that of John Hartman’s across the air shaft.  On the evening of May 2, 1894, Hartman noticed him at the window and hollered across, asking Grob over to play a game of cards.  Grob declined, saying he wanted to go to bed early.

But Grob did not report to work at the restaurant that morning.  When nothing had been heard from him by nightfall, an associate cook George Rampft, was sent to check on him.   When Rampft arrived, he found Grob’s door locked and there was no response to his knocks. He entered a vacant room next door and climbed out onto the fire escape, entering the apartment through the still-opened window.

The cook was not prepared for what he found.  The Evening World reported “Grob was found on his bed dead.  His throat was cut and skull crushed.  A woman’s coat was thrown over the body.”

Police surmised that the murderer had gained entrance to the apartment through the window by means of the fire escape, and then left by the front door.  The only item missing from the apartment was Grob’s watch.  “Everything else in his rooms was in perfect order.  The police do not take to the theory of robbery as a motive.”

With no known enemies, the motive for the brutal murder was puzzling.  “The presence of a woman’s cloak thrown over the body was additional mystery to the murder” said the newspaper.

In 1901, having owned No. 433 for well over half a century, the O’Brien family sold it at auction.  It continued to house apparel-related firms, including Rayvid Moss & Co., and Leishin & Dorf, both manufacturers of suits and cloaks, in 1904.

As the decade progressed, other types of firms would move in; such as the Fiberide Sample Trunk Co. in 1913 and the Kaldenberg Trading Co. in 1915.  Kaldenberg not only operated from the building, but owned it.

In 1918 G. W. Augustin Co., “dealers in Meerschaum and amber goods,” was in the building.  That year Kaldenberg leased the former Brenglemeyer space to the St. Regis Restaurant.

Throughout the rest of the century the building would continue to house a variety of tenants, like Combined Hotel China, Inc. which took the store and basement in 1951.   Around 1965 it was purchased by David Novros when the neighborhood was still filled with small factories.  That would all change as the 20th century drew to a close.

What would become known as the Soho Cast Iron District was discovered by artists who transformed the vast lofts into studio space, and the street level shops into galleries and cafes.  In 1996, two years after the upper floors of his own building had been converted to artists’ studios and joint living, work quarters for artists, Novros noticed that the wholesale produce industry was elbowing its way onto the neighborhood.

He lamented to Andrew Jacobs of The New York Times on April 14, 1996 that when he purchased No. 433 three decades earlier “you could walk down the middle of the street and not have to worry about getting hit by a car.”  He noted that within the past few years at least a dozen produce firms had moved on to the street.

“This kind of industry doesn’t belong in a neighborhood of artists,” he complained.  “We just have differing visions of what this place should be.  It’s a classic case of the bourgeois butting heads with new immigrants.”  Most likely the produce dealers would counter that it was the artists who were the newcomers to the neighborhood.

Navros retained ownership of the building and in 2010 proposed an interior remodeling and a rooftop addition for another artist’s studio.  The plans, which preserved the façade and resulted in a penthouse unseen from street level were approved by the City Planning Commission. 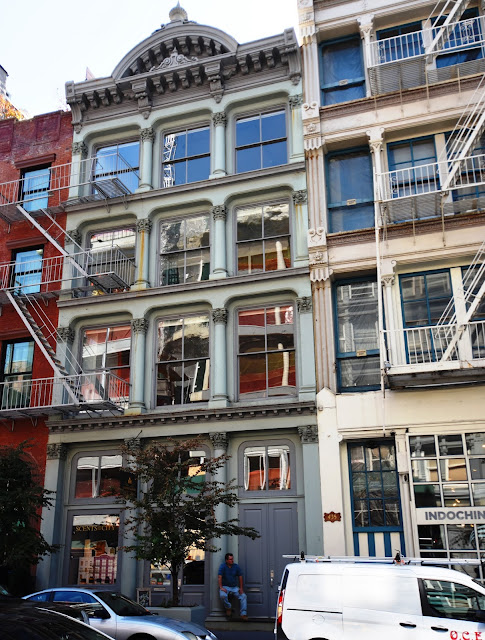 Today the building is lovingly maintained.  Remarkably preserved (including the ground floor storefront where Victorian businessmen grabbed lunch) appears much it did when the O’Briens remodeled it in 1870.  But deep inside remain the bones of the old house where Lambert Suydem planted his garden grape vine in 1827.