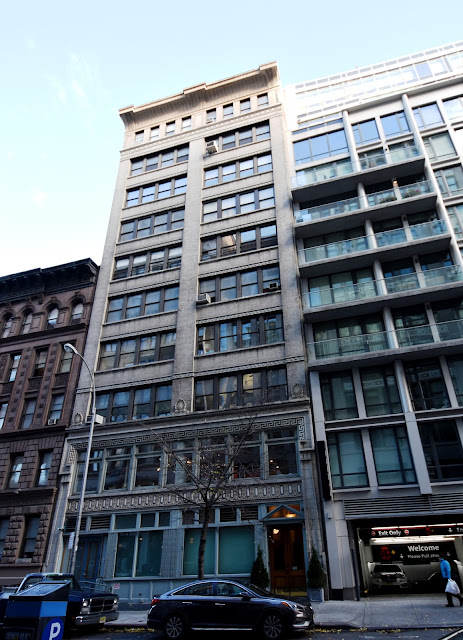 Change had already come to the West 22nd Street block between Sixth and Seventh Avenues by the last decade of the 19th century.  Once exclusively residential and respectable, many of its homes were now being converted for business purposes.

Edgar Valentine and his wife, May, lived in the four-story house at No. 147 West 22nd Street.  An incident on Thursday, September 22, 1896, evidenced the changing tone of the neighborhood.  May walked down the block to the Adams & Co. Dry Goods store on Sixth Avenue.  The store was just one of the giant emporiums along the shopping thoroughfare known as the Ladies’ Mile.

May Valentine chose a cloak, costing $22.50 and offered the clerk a check for $42.50 drawn on the 19th Ward Bank.  The Sun later reported “The cashier was suspicious and he refused at first to accept the check.”

May explained she did not want all the change; but she did need some ready cash.  The reluctant clerk allowed her, finally, to take the cloak and gave her a two dollar bill.  May, he said, could come back for the balance when he was assured the check would clear.

A day later then check was returned to the store marked NG.  Police were sent to the Valentine residence to arrest May.  She protested that she was innocent and that she had been given the check by her husband.  The Sun advised “so he was also locked up.”

The home where the police arrested the Valentines would last only about a decade longer.  On June 6, 1907 the 22-foot wide house was sold along with the neighboring house at No. 149.    Real estate operator Max Solomon took his time in improving the lots.  It was not until November the following year that his choice of architects, Frederick C. Zobel, was announced.  The Real Estate Record & Builders’ Guide reported that he had been commissioned “to prepare plans and specifications for the improvement of the plot…with a 9-sty business building.”  The cost of the loft and store structure was estimated by Zobel at $175,000.

Exactly a year later the building was nearing completion.  On November 14, 1909 the New-York Tribune reported that garment manufacturer Oriental Gown Manufacturing Company and Goldston & Fiedebaum had each leased 5,000 square feet spaces.  “This completes the rental of the entire building,” the newspaper noted.

When the building was completed in March 1910 a 10th floor had been added to the plans.  Construction costs had risen to $250,000 according to The New York Times; almost $6.5 million in 2015 dollars.  Zobel’s restrained design featured eight floors faced in buff-colored brick which sat on a two-story limestone base.  The minimal ornamentation of the upper floors was made up for by the exuberant deeply-overhanging cornice with its close rows of palm fronds covering its underside. 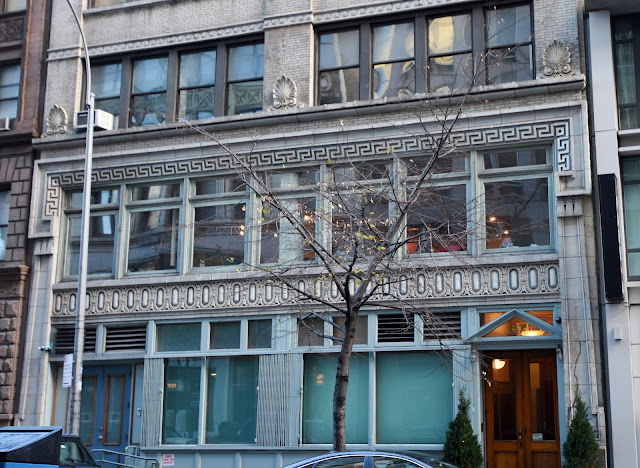 Max Solomon was in the business of building buildings, not running them.    A month after Nos. 147-149 West 22nd Street opened, he sold it to Charles H. Roman.

Lindner & Davidson operated under the name Universal Sponging Works.   Alfred Lindner was a partner in the firm.  Around 1907 he had become estranged from his daughter, Ethel Helen Lindner, who chose the stage as her profession.   The 17-year old girl took the stage name Ethel Lorraine and found work in the Winter Garden.  Alfred would not hear about his daughter again until 1912.

Soon after starting her career, the teen-aged actress caught the eye of Raymond Belmont, son of the massively-wealthy August Belmont.  Millionaire-showgirl flirtations were common; marriages were not.  Yet five years later, on November 21, 1912, the couple was married at the home of retired clergyman Edmund F. Crowan, in Jersey City.

If his daughter's profession had angered Lindner; the surprise wedding infuriated August Belmont and the obedient bridegroom abandoned his bride.  On December 6, 1912 the New-York Tribune reported “Raymond Belmont’s lonely bride of two weeks and a day has retained a lawyer to look after her interests…and friends of the Belmonts are already prophesying that before the first anniversary of the marriage, Mrs. Raymond Belmont will again be Ethel Helen Lindner by virtue of a Reno divorce.”

The newspaper hinted that it was August Belmont who was behind the desertion when it wrote “The only ground on which August Belmont could sue for an annulment would be on the ground that his son was insane at the time of his marriage.”  The newspaper’s investigation had also led to Alfred Lindner, whom it called “a cloth sponger, with a prosperous plant at No. 147 West 22d street.”

Alfred Lindner and his family lived in the Dallas Court, “a well appointed apartment house,” at No 660 West 144th Street.   When reporters arrived there, servants told them that Lindner was out of town.  Ethel’s stepsister offered, however, “None of our family has seen her in five years…I know nothing about the marriage.”

In the meantime, Raymond had returned to the Belmont mansion at No. 44 East 34th Street and Ethel was living in the Gosford apartments at No. 236 West 55th Street.  The well-publicized scandal made Ethel a potential box office draw and on December 5 William Hammerstein, manager of the Victoria Theatre, offered her a staggering $2,000 a week contract for a two-week engagement.

Ethel recognized financial potential in the marriage as well.  She told reporters “I am Mr. Raymond Belmont’s wife, and I have no intention of doing anything but remaining so.”

No doubt Alfred Lindner was uncomfortable with his name and his firm being repeatedly publicized in reports of the messy affair.  Ethel, on the other hand, forged on with plans to benefit from the situation.

On February 2, 1913, less than two months after the wedding, she sued for separation, “alleging desertion and non-support.”  When the Belmonts offered a settlement, she refused, preferring to litigate.  She canceled a planned trip to Europe in May.  The Sun explained on May 23, “Mrs. Belmont said last night that she will go abroad just as soon as she can settle her suit for separation and support…It will be fought out in court early next month.”

Alfred Lindner’s string of bad luck that year included being repeatedly targeted by pickpockets.  The situation became so chronic that The Evening World reported that “Sheriff Harburger appointed him a deputy in a vain effort to protect him from thieves.”

When Alfred was, yet again, the victim of a pickpocket in October that year, newspapers still dragged up the Ethel-Belmont scandal.  As he and his wife boarded a subway on the night of October 28, two undercover detectives saw a pickpocket grab his wallet.

In reporting on the incident, The Evening World began its article saying “Young Raymond Belmont’s father-in-law, Alfred Lindner, owner of a cloth sponging business, was pulled away from the side of his wife in a subway train in Grand Central station last night by Detectives Mugge and Gaynor”

Lindner, understandably, struggled with the unknown men until they could identify themselves as law enforcement officers.  In the meantime, the train pulled away with Mrs. Lindner aboard.  The 18-year old thief, Louise Webster, found himself under arrest for a disappointing haul.  Lindner’s pocketbook contained only three cents.  Webster was held on $3,500 bail.

The Evening World ended its report by turning back to the Belmont affair.   Ethel’s suit for separation had advanced, by now, to one of divorce.  “His daughter, whose stage name is Ethel Lorraine, is suing Raymond Belmont for divorce with the approval of the young man’s family.”

When the United States entered World War I Lindner and his partner, Louis Davidson, received a lucrative contract to finish the fabric for Army uniforms.  But, once again, bad press would follow Alfred Lindner.

On February 22, 1918 The Sun reported a shocking story.  “Not content with the generous legitimate profit allowed them, some and possibly many manufactures of olive drab uniforms for the United States soldiers have been robbing the Government hand over fist.”  Investigators estimated that the fraud could reach as high as $5 million.  “Robbery as practiced by men to whom cloth was entrusted under contract for the making of uniforms is pictured by the prosecutors as brazen,” said the newspaper.

The scam involved receiving Government-owned cloth, then selling it to retailers.  Among the men indicted was Louis Davidson, Alfred Lindner’s partner.

By mid-century the garment district had moved north of 34th Street and Nos. 147-149 West 22nd Street became home tenants like the Peerless Engraving Company and the Northern Radio Company.

Northern Radio Company manufactured communication equipment, like its multi-channel telegraph systems, and would remain in the building for decades.   The firm’s bookkeeper, Edith Cohen, was terrified on April 26, 1955 when she returned to the building with the $6,900 payroll.  She was suddenly confronted by a gunman who grabbed the bag of cash and made off in an automobile.

The aging loft building saw change in the 1970s as it was converted to living space above the second floor.  Thirteen apartments, some of them designated as “joint living work quarters for artists,” replaced the old factory spaces in 1979.  The ground floor continued to house Greenland Studios, a stained glass restoration and repairing firm run by Mel Greenland.  But that space, too, too, became residential in 2001.

Today the old loft buildings of the West 22nd Street block have been converted to high-end residences or razed for new apartment buildings.  Frederick Zobel’s Nos. 147-149 is happily little changed and a coat of Wedgewood blue on the former shop front draws attention to the lovely frieze above.