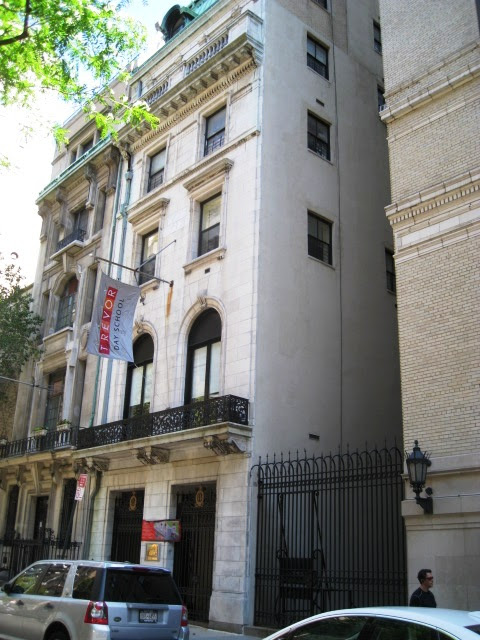 The year 1910 was momentous for banker Lawrence Lewis Gillespie.

Born in Chicago on December 23, 1876, he was graduated from Harvard in 1898.  But he was not present at the ceremony.  In his own words he later explained “In May of my graduating year I entered the volunteer service of the United States in the war against Spain as a second lieutenant in the First Regiment Volunteer Engineers.   As I had taken some extra courses during my four years, my degree was sent to me.”

Now in 1910 he stepped down from his position as Vice President and Director of the Equitable Trust Company of New York to enter the banking and brokerage firm of J. S. Bache and Company.   The same year he was instrumental in establishing the International Aviation Tournament at Belmont Park, Long Island (he was a founder of the Aero Club of America ).  And he asked the wealthy Irene Muriel Sherman to marry him.

Irene was the daughter of the immensely wealthy William Watts Sherman and his wife, Sophia Augusta Brown.  The family lived in a mansion at No. 838 Fifth Avenue; but it was their architecturally-masterful cottage in Newport where the bulk of their social entertainments was held.

Irene could count Philip Shearman as an ancestor.  He arrived in Roxbury, Massachusetts in 1633.  On her mother’s side was Chat Brown, one of the original proprietors of Rhode Island and the pastor of the First Baptist Church in 1642.  Roger Sherman helped draft and was a signer of the Declaration of Independence.

The engagement of two socially-prominent players created the expected stir.  A telegram from Newport to the New-York Tribune on July 23, 1910 read “Lispenard Stewart entertained at dinner this evening in honor of Miss Irene Sherman and Lawrence L. Gillespie.”  It added, “It was announced to-day that the wedding of Miss Irene Sherman and Lawrence L. Gillespie, which is to take place on September 8, is not to be a church wedding.  Instead, it is to take place at the home of Miss Sherman’s parents, Mr. and Mrs. William Watts Sherman, and will be a quiet affair.”

There was nothing exceptional about the announcement.  Sherman weddings tended to be held in one of family mansions.   Lawrence and Irene would be married in the Newport cottage.  The following year the wedding of Irene’s sister, Mildred, to Lord Camoys of England was held in the 5th Avenue home.

When the newlyweds returned to New York following their honeymoon Lawrence Gillespie began shopping for a home.  In 1911 he began negotiations on the “old Brinckerhoff residence at 19 East Eightieth Street,” reported The New York Times, “but owing to various restrictions on the property the sale was not made.”

Instead, in November that year, Gillespie purchased the vacant at No. 11 East 89th Street from the estate of Laura Manley.  On November 17, 1911 The New York Times announced “Ground will be broken at once for a five-story American basement dwelling, with a white marble front.”

Gillespie commissioned architect Arthur C. Jackson to design his mansion.   Completed in 1913, the neo-Renaissance mansion rose six stories rather than the originally-projected five.   Both the main and service entrances were deeply recessed and protected by heavy double gates of iron and glass. 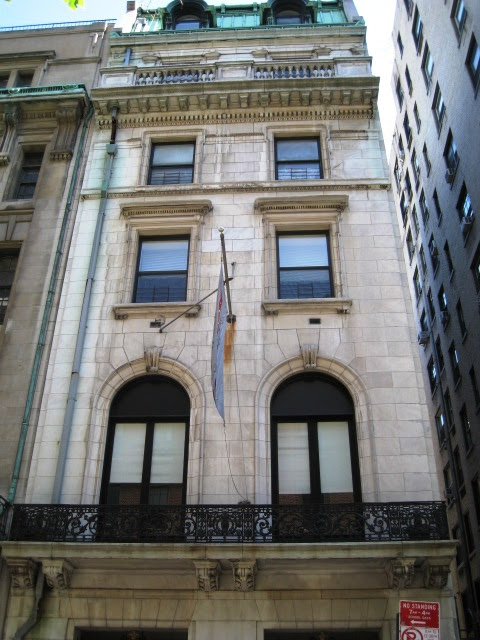 The restrained design of the 25-foot wide mansion was highlighted by exuberant elements like the ornate iron balcony at the second floor which incorporated the unicorn of the Gillespie coat of arms into the design, a shallow balustraded balcony at the fifth floor and a copper mansard roof with hooded dormers.  A wide service alley at the side allowed Jackson to add openings on the eastern wall.

The New York Times said “At 11 East Eighty-ninth Street the new home of Lawrence L. Gillespie was lately completed, and, with its artistic front, is a notable addition to the block.”

Irene Gillespie was highly involved in charity and social activities.   She was a member of the Schola Cantorum which The Sun described as “composed of many people of social prominence who are interested in vocal training,” and devoted many hours to her favorite charity, the New York Nursery and Child Hospital.

Like the Shermans, Lawrence and Irene Gillespie were highly visible in Newport society.   Lawrence would become a trustee of the Newport Historical Society and of the Redwood Library in Newport; and Irene’s entertainments were highly anticipated.   On August 26, 1913 The Times announced that Irene’s mother’s third anniversary gift to the couple was “the estate at Bellevue and Hazard Avenues, known as the Mrs. John Carter Brown homestead.”

Mrs. John Carter Brown was Irene’s deceased grandmother.  The newspaper described the estate as comprising more than seven acres and said “The cottage is one of the most attractive in Newport, having every modern convenience and being charmingly furnished.”   The value of the generous anniversary gift, assessed at $49,300 at the time, would be in the neighborhood of $1.2 million today.

On December 20, 1915 Eileen S. S. Gillespie was born in the New York mansion.  A year later her sister, Phyllis was born and in 1924 the Gillespie’s third daughter, Doris Beryl Gillespie came along.

During the winter season of 1919-1920 the Gillespies hosted “a series of dinners.”  One in particular caught the attention of society page readers.  On September 15, 1909 Anita Rhinelander Stewart had married Dom Miguel of Braganza, Infante of Portugal, Duke of Viseu.  The beautiful American heiress now became Princess Miguel de Braganza.  In 1920 she was back in New York and apparently spending much time with Irene and Lawrence Gillespie.

On February 4 the New-York Tribune noted “Mr. and Mrs. Lawrence L. Gillespie will give a dinner this evening at their house 11, East Eighty-ninth Street, for the Princess Miguel de Braganza."  Two days earlier the princess had shared a box at the opera with the Gillespies, Mrs. William Watts Sherman and Lawrence S. Butler.

The Princess Braganza was at Irene’s side two years later when Irene hosted a charity event for the blind in Newport.   On August 6, 1922 the New-York Tribune reported “Mrs. Lawrence Lewis Gillespie, who is interested in work for the blind and done much to help the pioneer Lighthouse, has offered to throw open her house for a sale in their behalf on Tuesday afternoon.”  Along with the princess, the newspaper said Irene had “secured the co-operation of a number of prominent Newport residents,” including Mrs. O. H. P. Belmont, Mrs. Phillip Rhinelander 2nd, “Mrs. Vanderbilt,” Mrs. J. Stewart Barney and others.


Even the slightest movements of Newport’s socially important were carefully reported and on August 1 that same year the Tribune noted that “A children’s birthday party for twenty-five guests was given by Mr. and Mrs. Lawrence Lewis Gillespie for Miss Phyllis I. R. Gillespie.”  Phyllis was seven years old at the time.

In 1927 construction began on the Church of the Heavenly Rest, behind the Gillespie mansion, at No. 2 East 90th Street.   Irene Gillespie may have donated time and money to worthy charities, but not even a church would get away with damaging her home.  On June 20, 1929 The New York Times reported “Mrs. Irene Gillespie of Newport, R. I., sued the wardens, rector and vestrymen of the Church of the Heavenly Rest…in Federal court yesterday for $35,000 and interest from January, 1927, for damages alleged to have been done to a six-story building at 11 East Eighty-ninth Street which she owns.”  Irene asserted that her white marble mansion had been damaged “during blasting on the church property.”

A nearly unbearable tragedy visited the family on Sunday May 10, 1931 when 7-year old Doris died in the house.  Her parents’ intense grief was suggested by the closing words of the obituary.  “Funeral private.  Kindly omit flowers.”

In 1939 Lawrence L. Gillespie’s health began to fail.   On February 7, 1940 the 63-year old suffered a cerebral hemorrhage in the 89th Street house.   Around his bed when he died were Irene, his two daughters and Phyllis’s husband, Alan T. Schumacher.  Funeral services were held in the mansion on the following Saturday morning before his body was taken to Newport for burial.

If the Government expected hefty inheritance taxes from the banker’s heirs, it was not to be.    It appears that all real estate, cash and valuables had already been transferred to Irene.  A month following his death, The New York Times reported “Lawrence Lewis Gillespie, retired banker and broker…left an estate of less than $1,000, according to the probate petition filed yesterday with his will.”

Irene was the sole beneficiary of the $1,000 estate.  “In petitioning the court to accept jurisdiction in the estate, Mrs. Gillespie said she owned a house at 11 East Eighty-ninth Street, where she lived about five months each year.”

Later that year, on December 26, Eileen was married to John Jermain Slocum in the 89th Street house.  In announcing the planned event, The Times noted that “Owing to mourning for the bride-elect’s father, the wedding will be very small, with only immediate members of the two families present at the ceremony.”

With the advent of World War II, Eileen moved back into the family mansion as her husband, now a United States Army captain, went off to serve.  On November 27, 1944 the couple’s baby daughter was born in the house.

Irene Sherman Gillespie continued to live on in the mansion until May 1967.  Now 80 years old, she sold it to The Society of the Helpers of the Holy Souls for $350,000.  After half a century as the home of the Gillespie family, it was converted to a convent.

The interiors of the Gillespie mansion suffered abuse when, in 1991, it was converted for use by the Day School of the Church of the Heavenly Rest, the target of Irene Gillespie’s law suit 62 years earlier.   It became the Trevor Day School’s Pre-Kindergarten and Kindergarten classes. 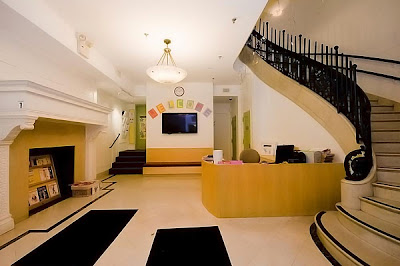 Despite the abuse inside, the outward appearance of the Gillespie mansion is essentially unaltered.

non-credited photographs by the author
Posted by Tom Miller at 2:40 AM