In 1766 the Road to Crown Point was a stately drive that ran through the country estate of James de Lancey Jr.  A year later, de Lancey renamed it Grand Street.  Following the Revolutionary War and his banishment as a Loyalist, de Lancey’s property was confiscated and later the building lots were auctioned.  By the 1810s and ‘20s, Grand Street saw the rise of modest working class homes, including the two at Nos. 511 and 513.

In 1826 the property was purchased by James Lent and Henry Barclay, his nephew.  The well-respected men were descended from New York’s oldest families.  They recognized the investment potential of the real estate that sat on what was now a major east-west thoroughfare that terminated at the ferry Brooklyn.

Had Lent and Barclay constructed two identical houses, each would have been around 23-feet wide.  Instead they choose to give No. 511 the unusually ample width of 29.5 feet—leaving only 17 feet for No. 513.  Like its big brother next door, No. 513 was completed around 1827 and most likely always had a shop on the first floor and living quarters above.  A single, centered dormer perched above the roofline. 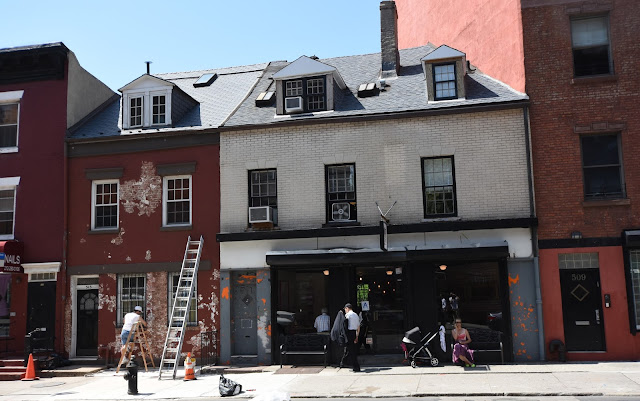 Among the first tenants to do business from the shop was P. W. Frank & Co., a second-hand dealer.  In 1845 he paid $25 to the City for his license—a significant $800 in today’s dollars.  By 1848 the family of Scottish immigrant Thomas S. Armstrong was living here; including Armstrong’s German wife and their sons.  A plumber by trade, Armstrong was the first in what would be a plumbing tradition in the house.

The Armstrongs had moved on by 1853 when another plumber George B. Burn’s family moved in and he established his business here.  He brought Emmet H. Smith into the operation by 1858.

George B. Burn’s wife, Amelia, died in the little house on Saturday evening, September 28, 1872.  Her funeral was held here at 1:30 on Tuesday, October1.  Before long Emmet Smith took over the plumbing business and would remain a neighborhood fixture at No. 513 Grand Street for decades.  His son, Alfred L. Smith, became his partner and the operation was renamed E. H. Smith & Son.

To help pay the rent to the Barclay family, a room in the tiny upstairs floor was rented. In 1873 the unmarried 6th Grade teacher Emily Johnson lived here.   She was replaced by 1876 with another teacher, Martha J. Burn, who taught at Primary School No. 20 on Broome Street.

Emmet H. Smith’s advertisements listed him as “plumber, steam and gas fitter.”  His reputation was such that his good name was used for criminal purposes in 1881—a 19th century version of identity theft.

In April that year James McLaughlin was arrested for stealing a watch.  He was being held at $1,000 bail.  A man arrived before Judge Cowing, identifying himself a “Mr. Emmet H. Smith, a respectable plumber,” as reported in The New York Times on June 11.  The schemer got Smith’s name and profession correct, but was off-base on his location.  He told the judge that he did business at No. 57 Broome Street and “swore to the ownership of the house and lot” there.  On the guarantee that the property was worth $8,000, McLaughlin was released.

When it came time for the trial, Emmet Smith was notified to produce the accused in court.   Dumbfounded, Smith pleaded ignorance to the entire affair.   Further investigation revealed that a butcher, George Harrison, had received $20 to impersonate Smith and free McLaughlin.  He was arrested and sent to State prison for five years.  James McLaughlin, on the other hand, had “left for parts unknown.”

Families continued to live in rented rooms upstairs.  The Fair family lived here by 1898, when on October 27, 72-year old Christopher Fair died here.   William S. Fair was a house painter and his family would remain in the building for more than two decades.

Two years later, on January 16, 1900, roomer Joseph Lupperallo met with a gruesome death.  He was walking the railroad tracks of the New York, New Haven and Hartford railroad near the Westchester station, unaware of an approaching locomotive behind him.  According to The Evening World later that afternoon, “He did not see he train until the engine blew the whistle.  Then he turned and stood as though petrified.  He was badly mangled.”

Sixty-nine year old Matilda Haubeil was living here in 1902 when she, too, passed away.  In the meantime, Emmet and Alfred Smith continued to run their plumbing business downstairs.  Although the Smiths would still be advertising as late as 1904; Jackson & Griffin, plumbers, listed No. 513 as their address in 1901 and 1902.

In 1921 the Barclay family sold No 513 Grand Street after almost a century of ownership.  It was purchased by John W. Sheehan, who worked as a dispatcher for the New York City Fire Department and lived across the street at No. 526 Grand Street.  On July 24, 1921 the New-York Tribune reported that Sheehan had quickly resold the building “to tenants who have occupied” it “for many years.”  The long-term tenant and buyer was, of course, William S. Fair.

The title of No. 513 Grand Street passed to George Bungay.  A make of toilet preparations, he ran his business from street level and lived upstairs until around 1937.   When the house faced foreclosure in 1942, it became property of the City, which sold it in 1944 to Angelina Picerno.

Picerno renovated the house to what the Department of Buildings described as “one apartment.”  The alterations, completed in 1948, created a two-story private home and attic.  Angelina Picerno’s architect removed the old store front (while retaining the structurally-important stone entablature), and reproduced a façade expected in a Federal-style residence. 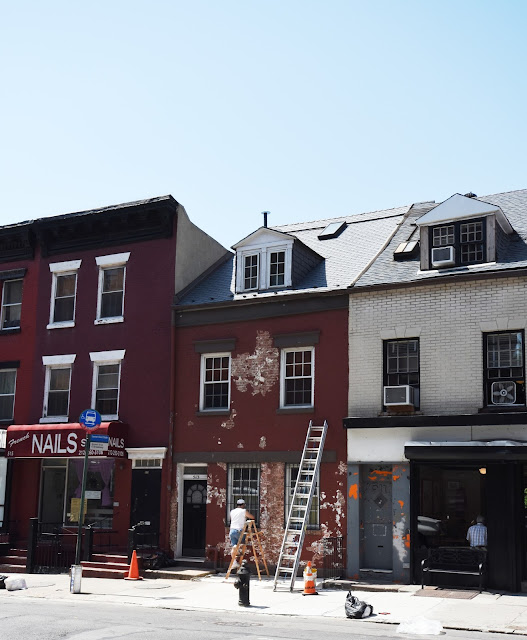 The skinny little house survives, along with the much-altered No. 511, as surprising relics of Manhattan’s working class residential neighborhoods nearly two centuries ago.