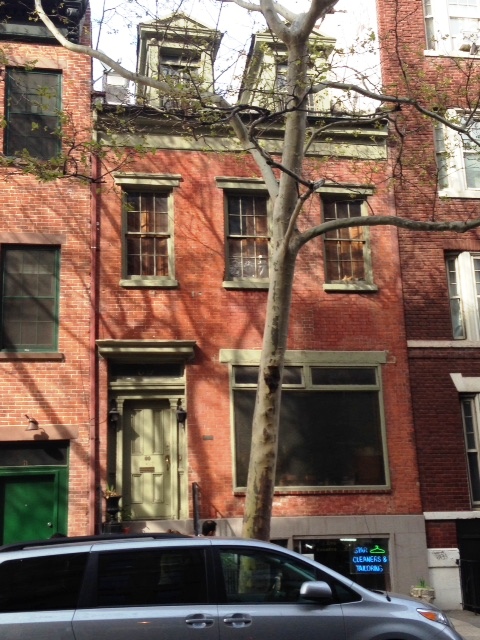 In the 1830s small brick-faced homes began appearing on the block of West 10th Street between Fifth and Sixth Avenue.  Among the first was Frances Nicholson’s house, begun in 1831 and completed the following year.

The 19-foot wide house was two-and-a-half stories tall over an English basement.  A steep stone stoop rose to the handsome Federal doorway.  Unlike the entrances of many similar homes being erected at the time with fluted Ionic columns; the door to No. 69 was flanked by squared engaged columns with simple capitals.  A generous transom allowed sunlight into the entrance hall.   Handsome and unpretentious, Frances’s home had two rather tall dormers at the attic level where a low-paid servant girl may have lived.  Frances Nicholson, who was a widow, would stay in the house only eight years. 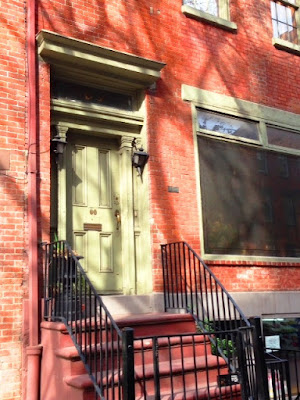 On December 16, 1835 the Society for the Relief of Half-Orphan and Destitute Children in the City of New York was established.  There were at the time two orphanages in the city—one supported by Protestants and which admitted only children with neither parent living, and the Roman Catholic Orphan Asylum which also accepted “half-orphans”--children who had one living parent.

The Society for the Relief of Half-Orphan and Destitute Children sought to care for children with only one parent, “and by this relief to enable the surviving parent to work more advantageously, and contribute weekly a small sum for their board.”

The Society began with the care of four children in a basement on White Street.  But things quickly changed.  In its 1876 Report to the State Board of Charities, the Society explained “Mr. James Bowman was one of its earliest and most liberal friends.  Through his means in 1839 the Society was enabled to purchase a house covering two lots of ground in Tenth street, and known as the Nicholson house.  The children were taken to this building in May of the same year.”

By the time of the report, the Society had added other properties abutting the Nicolson house.  It described the facility saying “The Asylum is comfortable and commodious, and though not including all the improvements found in more recent buildings, is well adapted to its purpose.”

Living at No. 69 West 10th Street in 1879 was Caroline Hamilton.   She may have helped care for the children of the Society here, but she also held a full time position as teacher in the “Colored Grammar School No. 1” on Mulberry Street near Grand Street.

As the last decade of the 19th century dawned, the block of West 10th Street had seen disturbing changes.  Houses of prostitution peppered the block which was no longer a fit environment for rearing children.  On Thursday, June 1, 1893 No. 69 West 10th Street was sold at auction.  The sale marked the beginning of a stark change.

Court papers disclosed later that within the year Police Captain Joseph B. Eakins “was specially and personally notified by citizens of the evil conduct of said houses, Nos. 60, 64 and 69 West Tenth street.”  The house where little children had been cared for and given strict Protestant instruction was now a house of prostitution.  And the police, under Captain Eakins, accepted bribes and turned their heads.

Reformers, most notably the Parkhurst Society, were obsessed with shutting down places of vice and, simultaneously, rooting out police corruption.   The women who ran the “houses of disrepute” were terrified of the prospect of Parkhurst agents discovering their operations.

Frank Levison saw potential profit in the situation.  On Wednesday, April 18, 1894 the 26-year old knocked on the door of No. 69 West 10th Street.  When inside, he showed Ellen Smith a gold-plated badge and identified himself as a detective.  “Then he intimated that a present of a few dollars would give Miss Smith immunity from arrest,” reported The Evening World two days later.

Ellen put him off and considered her situation.  When he returned the following day she handed him a $10 bill—more than $275 today.  What Levison did not realize was that Ellen was already paying the police.  She immediately notified Policeman Carey who arrested him for blackmailing.

In the meantime the Parkhurst Society was gathering damning evidence against Captain Eakins.  In May 1895 it included No. 69 West 10th Street on its list of “Houses of Assignation” which the police refused to close.  A month later, on June 12, Eakins was put on trial charged with “neglect of duty, conduct unbecoming an officer, conduct injurious to the public peace and welfare, and inefficiency.”  The charges stemmed from the Parkhurst Society’s claims that “from Jan. 1 of this year until May 17 a large number of disorderly houses were conducted in the Fifteenth Precinct, of which Eakins is Captain, and that he failed to close them or take any action to arrest their inmates.”  Among these was Ellen Smith’s operation at No. 69 West 10th Street.

On the first day of testimony, Benjamin B. McFadden, an envelope manufacturer who lived at No. 66 West 10th Street took the stand.  “He said he took particular notice of the houses at 60, 69, and 64 West Tenth Street and saw persons of undoubted bad character enter and leave at all hours of the day and night,” reported The New York Times.

Dr. William Wright, of No. 55 West 10th Street said “No. 69 used to be a pretty bad sort of place” but he admitted he thought things had improved lately.

The trial was still going on two weeks later.  Parkhurst Society agent Edgar Whitney gave additional information regarding the goings on in the house.  “At 69 West Tenth street the witness said drinks were served in the house.  He paid 50 cents a bottle for beer.”

The trial brought an end to Captain Eakins’s career and to the illicit goings-on in the former orphanage.  When Patrick J. Ryder sold the house in 1906 it was apparently being run as a boarding house.

Jacob Werner was rooming here in 1915.   He had been one of the American citizens stranded in Europe in 1914 when World War I erupted.  The United States Government loaned a total of $1,500,000 (sent in the form of gold coins on the battleship Tennessee) to enable these victims to return home.

On November 1, 1915 The New York Times explained “It will be remembered that at the time a veritable panic overtook Americans who were in Europe, many of whom were without money and even though they had drafts or letters of credit, were unable to raise money on them.”

The Treasury Department expected that the Government’s generosity would be quickly repaid by the grateful citizens.  It was not to be in many cases.  It was soon apparent that many of the recipients gave false names and others, now safely back in their homeland, had no intention of repaying the loans.  In frustration the Treasury Department released a list of “delinquent debtors on account of war relief funds whose refusal to pay has been the least justifiable.”

Jacob Werner was publicly shamed when his name appeared on the list, published in The New York Times.  He owed the Government $55.

A modern career girl, Edith M. Rohr lived in an apartment at No. 69 West 10th in 1921.  She was an executive secretary in a firm “of prominent architects.”  She told The Evening World “Considering the different in personalities of the men, the position calls for much tact and tolerance; close attention to detail, infinite patience, stick-to-itiveness and a vast sense of humor.  I might say that, without a sense of humor, the woman in business is a failure.”

The Evening World reporter noted Edith’s living arrangements.  “This woman, who spells success with a capital S, found that she could not do her best work unless conditions at home were conducive to rest and comfort.  Accordingly she made her apartment a real home, not merely a place to live in, but a home with books and other creature comforts which her salary provided.”

By 1950 stores occupied the basement and first floor.  A show window replaced the two parlor windows.  When the building sold in March that year, it was assessed at $19,000; around $190,000 today. 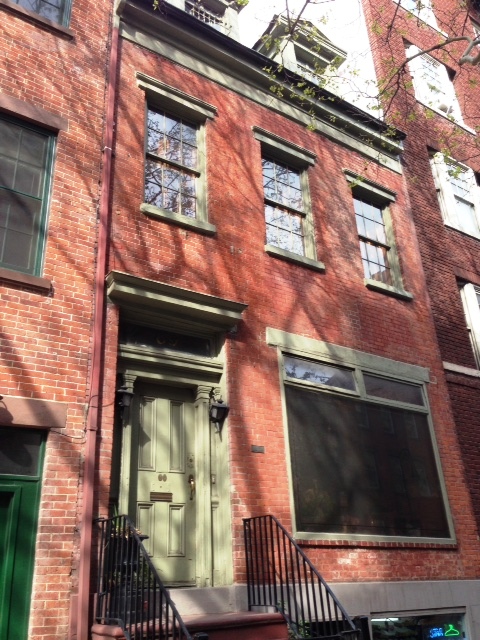 In 1971, for the first time since 1839, the house was returned to a single family home above the basement store.  The renovation stopped short of restoring the parlor windows; instead the show window became a picture window.  Despite the widely disparate uses throughout its long life, much of the home's Federal appearance survives.  Even with the vast picture window and the neon signs in the basement shop, it is a charming relic of early West 10th Street.