Jacobus Roosevelt (who went by the Anglicized name James) not only had a fortune in 1780, he had a college education—having graduated from Princeton that year.  The Roosevelt family traced their American heritage to Claes van Rosenvelt who arrived in New Amsterdam sometime between 1638 and 1649.

Like all wealthy New Yorkers at the turn of the 19th century, James Roosevelt owned an estate north of the city.  His property in what is now Harlem was the equivalent of 120 city blocks.  But he was also snatching up real estate closer to town, in the still rural areas around Broadway north of Houstoun Street (later renamed Houston Street).   Among his holdings was the plot of land that would be numbered No. 7 Bleecker Street.

In 1813 the first house in the area appeared at Nos. 4 to 8 Bleecker Street.  It was followed in 1816 by a brick-faced residence at No. 7.   It is unclear whether Roosevelt constructed the house, or whether tobacconist George Lorillard did—in either case Lorillard owned the property by the following year.

Clad in Flemish bond brick, the house was an ample three bays wide.  It is doubtful that Lorillard lived in the middle-class home.  In 1821 Jared E. Barite signed a lease on the house; and by 1834 it was home to the Townsends—Phebe, a widow, and her son Daniel who was listed in directories as a clerk.  Two years later the Townsends were still in residence; however they had apparently taken a boarder.   Henry Hayes, a plasterer, was living also here in 1836.

It appears that No. 7 Bleecker would never again be a single family home.  By 1841 Dr. Peter F. Clark shared the house with George W. Tillou, a broker with an office on Wall Street.  The following year two additional tenants were here: William Fero and William H. Albro.  Albro ran a grocery at No. 237 Bowery.

Residents came and went throughout the years, although Peter F. Clark remained at least until 1846.  It is possibly a relative, Harriet L. Clark, who was living here in 1850.  She taught school and earned a salary of $75 a year.

Catherine and George W. Coster had purchased the house in 1840 and in 1854 they increased the revenue-producing space by raising the attic to a full third floor.   The arched openings on this level forewent the more expensive stone lintels in favor of brick; and an up-to-date Italianate cornice was included in the renovations.  Dr. A. W. Jones, a dentist, lived here throughout the construction, which was completed in 1855. 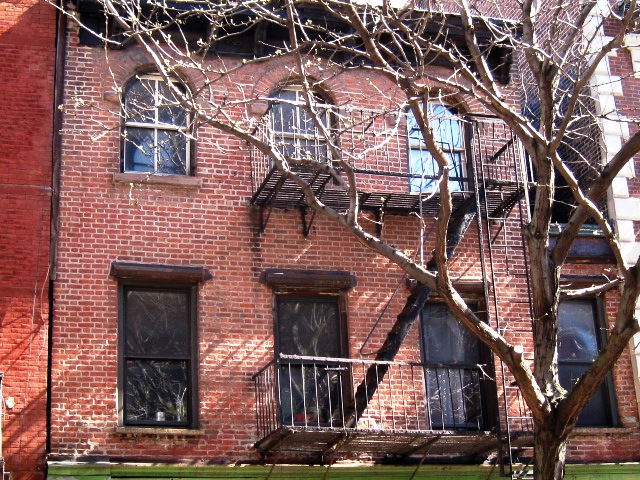 As the Civil War came to an end, the once-respectable neighborhood was experiencing unwanted change.  In 1865 F. Brill, “segar dealer,” and tailor John Richard were living in No. 7.   But only two doors away at No. 3 Bleecker Street William Sherman ran the Sherman Cottage.  Sherman described his operation as a saloon and “a public place for people to go in and out, to eat and drink.”

Police and neighbors disagreed.  On July 25, 1865 Sherman found himself in court, charged with keeping a disorderly house—the polite Victorian term for a house of prostitution.  The New York Times reported on the trial, saying “It was shown that there were lounges in the rooms; that women would stop men in the street, and after some talk they would retire to the supper rooms, remaining but a short time, not long enough to have a supper cooked, and come out again.”

John Richards was called as a witness.  He testified “to the annoyance the house caused him by women cruising before his door and negotiating with men, and then taking them down to these ‘private supper rooms.’”

Richards would be  back on the stand in another case just a month later.  One of the supervisors of Kings County had been charged with misuse and embezzlement of funds.  On August 9 The Times lamented “Kings County is in tribulation.  Brooklyn has come to grief.  Williamsburgh sits in sackcloth and ashes.  Mr. Charels W. Cheshire, one of the Supervisors of the county—a man of unstained repute, of unblemished character, of political power and social distinction—has been tried by court-martial, convicted of malfeasance in office, sentenced to six months’ imprisonment in the Albany Penitentiary, and mulcted in the sum of $2,000.”

Among the list of merchants called to testify regarding expensive items purchased by Cheshire with ill-gotten money was John Richard.  The suit of clothes he provided to the politician cost $30—in the neighborhood of $450 today.

With its additional story the house accommodated an increased number of boarders, nearly all of German descent.  In 1877 directories listed Edward B. Versfelt, “newsdealer;” Philip Horr, bootmaker; and Jacob Cohen and Isaac M. Pearlstein who not only lived here, but ran their pawnbroker business, Pearlstein & Cohen, in the building.

In 1889 Annie Weinberg and her husband rented rooms in the house.  Annie gave birth to twins on December 10 that year.  Tragically one was stillborn and the other, according to The Evening World, “apparently died a few hours later.”

The newspaper was unexpectedly light-hearted in its reporting, running the sub-headline “Baby Weinberg’s Peculiar Experience With the Grim Conqueror.”   On reporting the second infant’s death, it said “But it revived again for a few moments and then once more life apparently became extinct.”

Deputy Coroner Weston arrived, pronounced the baby alive, and “resuscitated it back to vigorous life again.”    But when a reporter arrived at the house the following morning, he was told that the infant had died.  The Evening World began its report on the tragedy saying “Alas for Coroner Weston’s reputation as a saver of infants’ lives.”

As the turn of the century neared, the area became the center of Manhattan’s fur trade.  In 1898 a Chinese laundry operated out of the first floor of No. 7 Bleecker Street and the first of the building’s furriers, Max Schwartz, had taken space as well.

In 1901 the Fur Trade Review noted that J. & L. Feldman “have located at 7 Bleecker street, where they manufacture fur tails.”   The building was the scene of a fur robbery on December 19, 1903.  By then the building was replete with fur dealers, including Feldman, W. Hecht, I. Wittleman, Davis Wootner, and Joseph Farden.

The former house continued to lease to furriers—as many as eight different firms in 1917—into the 1920s.  A chunky storefront was installed in 1925, designed by Jacob Fisher.  It would be home to a variety of stores for decades, including the Albert Kendell Stationery store.

After decades of use as factory space, the upper floors were returned to residential use in the second half of the 20th century.  Here New Yorker cartoonist Arnie Levin lived for a time; followed by American photographer Robert Frank.   His photograph entitled New York City, 7 Bleecker Street, September is in the collection of the Metropolitan Museum of Art.

The historic two-century-old house is more than a bit bedraggled and commands little, if any, attention from passersby.  It is difficult to envision it when it was built, with only one other house on this block in what was essentially still a field.