As the 1890s drew to a close the mansions of Riverside Drive rivaled those along Fifth and Madison Avenues.  The upscale flavor of the neighborhood spilled onto the streets branching off the Drive and speculative developers had been busy for a decade erecting entire blocks of lavish rowhouses.

Clarence True was among the most prolific architects of the developing Upper West Side.  The scores of commercial buildings and homes designed by him would help form the district’s architectural personality.  Highly successful, True covered both sides of the speculative game by establishing the Riverside Building Company.

In 1898 True designed a row of eight houses stretching along the south side of West 80th Street from No. 320 to 326, just off the Drive.  Owned and constructed by his Riverside Building Company, they were designed in the Elizabethan Revival style.  Each was intended for a wealthy family; but No. 326, just off the corner of Riverside Drive, was the undisputed star of the show.

At 45-feet wide, the brick-faced mansion appeared at a glance to be two separate homes.  The eastern half of the house, including the service entrance, was flat-faced and distinguished by a stone oriel at the third floor and a broad set of grouped openings at the second.  The main entrance sat within the bowed façade of the western portion of the house.  Above was an especially attractive balcony with an openwork stone balustrade.

The mansion was completed in 1899 and was purchased by Theophilus Roessle.  Born in Albany in 1834, Roessle started in the hotel business at the age of 15.  Now successful and wealthy, he bought up New York City property, much of it on the Upper West Side.  Roessle’s primary residence was in Washington DC where he ran the Arlington Hotel; although he and his family spent much time in Paris.

The West 80th Street mansion was purchased as a rental investment and Roessle would have a succession of tenants, few of whom stayed for very long.  In reporting on a new lease agreement on September 27, 1902 The New York Times got the owner’s name grossly wrong.  And it would not be the last time.  The newspaper said that “Mrs. Russell” had leased the house “to a Mr. Starrett.”

The “Mr. Starrett” was Theodore Starrett, one of what The Sun would later call “the five remarkable Starrett Brothers.”  Hailing from Lawrence, Kansas, the brothers were all involved in the construction industry.  The Sun said in 1918, “In the sphere of steel skeleton construction their surname means as much the nation over as Edison’s name in the sphere of electromechanical invention.”  Theodore Starrett, along with George A. Fuller, pioneered the concept of modern contracting.

Starrett would stay in the house only a year.  In 1903 it was leased to Madame San Marzano.

In 1904 Theophilus Roessle died in Paris.  Upon his death his family remained in France; but his widow continued to manage the New York City properties, including No. 326.  On September 3, 1914 The Times got her name wrong once again, reporting that “Mrs. A. E. Boessle of Paris, France” had leased the house.

The new lease holder, Louise F. Parker, had plans for the mansion.  She opened her exclusive girls’ school in the house.  Advertisements appeared in periodicals like the Columbia Alumni News.  “Girls wishing to complete their studies in Art, Music and the Languages, received in delightful home surroundings.  Girls may choose their own teachers.  Advantages of Opera, Concerts, Lectures and Social Life.”  Louise Parker was quick to add one more word to the ads:  Chaperonage.

In 1920 the Roessles began liquidating their New York holdings and on July 4 the New-York Tribune reported that three homes on West 78th Street were being sold.  But the estate held on to No. 326 West 80th which continued its use as a private school.  By 1922 Mrs. Parker’s school had made way for The Teasdale Residence “for young women and girl students.”

Run by “the Misses Teasdale,” its principal was Mrs. Susan Teasdale Ralston.  Wealthy families who sent their daughters to board here would pay $1,200 tuition—about $15,700 today.  The boarding school was opened all year and, as Louise Parker had done, stressed “chaperonage.”  The school would remain in the mansion until 1934.

That year, in March, N. T. Roessle “of Nice, France,” sold the house to Sumner Gerard of the Aeonitt Realty Corporation.  The Depression brought the glory days of No. 326 West 80th Street to an abrupt end.  At least for several decades.

The spacious interiors where the daughters of wealthy businessmen and bankers had practiced the piano and learned proper deportment became furnished rooms.  Just three months after Gerard purchased the house, William Allen Shepherd was arrested for shooting a police officer in the head.  “Shepherd, who said that he has been estranged from his wife, Helen, for some two and a half years, lived here in a furnished room at 326 West Eightieth Street,” reported The New York Times on June 22, 1934.


Three years later Sumner Gerard leased the house for five years “for remodeling into one and two room suites.”

The neighborhood of once refined mansions saw many of them razed throughout the 20th century, replaced by modern apartment buildings; and others severely altered and diced into apartments.  But the area experienced a renaissance in second half of the century.  In 1967 No. 326 was reconverted to a single family residence. 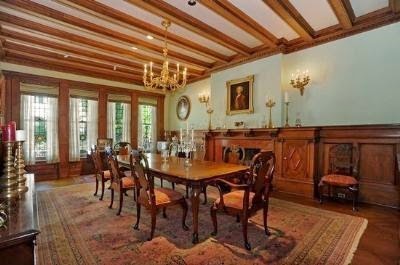 The seven-bedroom home sold in 2010 for $8 million.  Despite several decades of multifamily use, many of the original interior appointments survive.  Clarence True’s remarkable double-wide mansion endures as a reminder of Riverside Drive’s glory days, and of a time when privileged girls were sent away to be “finished.”