By the last decade of the 19th century the concept of upscale apartment living had shed the stigma of the tenement.  To differentiate between the two, buildings constructed to house middle- or upper-class tenants were termed “flats.”  Financially comfortable families on Manhattan’s East Side were a bit tenuous about giving up their private homes for apartment living.  Those on the Upper West Side embraced the idea with relish.

In many cases, rows of private homes on the Upper West Side’s streets and avenues, constructed in the 1880s, were being demolished within a decade to be replaced by apartment buildings.  Edison Monthly explained the trend saying “The aim seems to be to relieve the heads of a family of all of the plebeian details incident to the conducting of an elaborate household with its lavish entertaining.”

In 1895 developers Adler & Co. set the architectural firm of Neville & Bagge to work on designing two apartment buildings for upper-middle income families at Nos. 167 and 169 West 80th Street.    The fledgling firm formed by Thomas P. Neville and George A. Bagge was only three years old.  Like so many of the architects working in the Upper West Side at the time, they tossed historic purity aside in favor of eye-catching design.

The two near-twin buildings were completed in 1896; a marriage of Romanesque Revival and Renaissance Revival, with a splattering of Beaux Arts.    The decoration of the stone bases had no doubt kept stone carvers busy for months producing the elaborate entrance surrounds, foliate bandcourses and portrait keystones.   Above, four floors of beige brick was set off with carved stone spandrel panels and elaborate fruit-and-flower garlands above the uppermost openings.  No. 169 was one-third narrower than its bigger brother next door.

Among the first tenants in No. 169 was the actor Edward J. Ratcliffe—the leading man of the Lyceum theatrical company—and his wife.   Although Alice De Lacy came from a sketchy home life, her family was against the marriage.   Alice’s father was Peter De Lacy, a well known “poolroom keeper and bookmaker”—Victorian terms describing an illegal gambling operator.  She and the actor were married secretly in Hoboken in 1894 because, according to The New York Times later, “the marriage is said to have been against the advice of the woman’s parents.”

Alice would regret going against their good counsel.

The Times described her as “a handsome young woman, tall and straight, with reddish brown hair, parted in the middle, and combed back in heavy waves.”   She and Ratcliffe had a rocky marriage from the start; but on Saturday June 12, 1897 things turned violent.

Months later, in court, Alice testified that when Radcliffe came home that afternoon he found that the fish that was intended for Sunday dinner “had been left on the dumbwaiter.  He rushed at me and struck me with his closed fist, and knocked me up against the chandelier on the wall with such force as to bend the chandelier.  I had gashes in my head in two places.”

Radcliffe left the apartment on his bicycle, returning in time for dinner.  He held their daughter, Virginia, on his knee and “was talking all the time about the fish being ruined.”  When he told Alice to sit down and eat, she balked.

“I refuse to sit down.  I’ve stood enough of your vile talk.”

It was bad enough for the actor that his wife’s neglect was responsible for the spoiled fish; but now her back-talk set him over the edge.

“Then he grabbed me by the throat and forced me down into a chair.  He handed the child to the servant girl.  I got up and asked the girl if the baby was hurt.  He cried, ‘Let me get at her,’ and struck me in the face as hard as he could.  He knocked me down, and I screamed ‘Murder! Help!’”

According to Alice’s testimony, as she attempted to get up from the floor, he knocked her down again and stamped on her with one foot “as hard as he could.”  Then, “As I got to my knees he grabbed me by the hair and tried to dash my head against the floor.  Finally he let me go and went away.”

A journalist for The New York Times remarked on Alice Radcliffe’s composure during testimony.  “It was feared that she would break down or lose control of herself, but instead she told her story clearly and unfalteringly from beginning to end.”

Radcliffe’s attorney focused on E. J. Ratcliffe’s dutiful providing for his family.  “You had money, didn’t you,” he asked Alice.  “You didn’t live on air, did you?”

Not intimidated, Alice replied “We were supposed to most of the time.”

When the trial adjourned on the afternoon of December 14, 1897, Judge Newburger shocked many by ordering Ratcliffe to be held in the Tombs.  None was apparently more shocked than the defendant himself.

“Ratcliffe smiled sarcastically as one of the court officers took him in charge, but it was easy to see that he was not only surprised, but much cast down by the Judge’s order,” reported The Times.

In an interview shortly after the incident, Ratcliffe denied the charges.   “He admitted that he had some unpleasant words with his wife on June 12, because she had neglected certain things, but said that he did not strike her.  He said that he left the house in a fit of anger, and staid away all night.  When he came back in the morning prepared to forgive his wife, she had gone to her father’s, leaving the gas burning.  He sent a note to her, but she would not answer.”

After Edward J. Ratcliffe was sent to the penitentiary for the assault on Alice, the case became even more twisted.   As evidence in the divorce case of Alice was being heard, another wife appeared.  Caroline Ratcliffe had married him in England on August 19, 1883.  Thomas C. Kinney, who heard Alice’s case, told reporters that he found “that at the time he married her he already had a wife who was living and from whom he had not been divorced.”  Kinney had sage advice for Caroline.  “He recommends a divorce,” said The New York Times on March 9, 1898.

Few of the residents of No. 169 were as notorious.  At the turn of the century Police Captain Creamer and his family lived here.   On December 15, 1901 he was riding on 75th Street in a pony cart with his 12-year old son, Frank, at the reins.   Drivers of horse-drawn vehicles needed to take extra precautions when crossing the avenues because of the electric street cars that ran down the center.

The following day The Times reported “Young Creamer was driving the pony cart through Seventy-fifth Street and was just crossing the tracks when the car came speeding along.  Before the motorman had time to stop the car it crashed into the cart, knocking it over and throwing its occupants out on the pavement.”

The newspaper called their injuries “severe;” however the Captain and his son went home in a cab before the ambulance arrived.  There “their injuries were dressed by their family physician.”

Also in the building at the time were Thomas W. Parker, an “executive stenographer” in the Mayor’s Office who earned $1,500 a year in 1903 (around $41,000 today), and Evan Lord Gunter, an architectural draftsman.

In the meantime, No. 167 was home to Albert Payson Terhune by 1905.  Born in Newark, New Jersey in 1872, by now he was internationally known as a traveler, author and editor.  In describing his 1893-1894 trip through Greece and Asia, Who’s Who in New York City and State in 1905 said it was spent “crossing Syria on horseback, living with Bedouins in the desert, investigating leper settlements and penetrating to Mohammedan shrines barred to foreigners.”

Terhune married Anice Morris Stockton on September 2, 1901 (she was the great-granddaughter of Richard Stockton, signor of the Declaration of Independence).  He was now on the editorial staff of the New York Evening World.  Among his books were Syria from the Saddle and Columbia Stories.  He was co-author of the libretto to the comic opera Hero Nero in 1904 and contributed short stories, novelettes and verse to various magazines.  Who’s Who called him an “authority and expert writer on athletics and physical culture and expert boxer and fencer.” 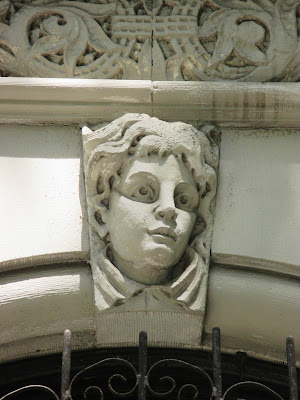 Both buildings attracted engineers and inventors.  In 1916 B. B. Crombie was living in No. 169 when he helped found the Electro-Amalgams Corporation of New York, which “proposes to establish a system for the electro-chemical purification of water and an electro-chemical mining process,” as described in Electrical World.  Next Door engineer J. Churchward lived, as did August P. Jurgensen, an engineer of “construct machinery.”

Among the more interesting families in No. 167 was that of Fred V. Sittig, who moved in before 1920.  A self-described “Teacher of Piano and Accompanist,” he headed the Sittig Trio.  Marketed as providing music for “concerts, clubs, musicals, etc.,” the combo consisted of Fred on the piano, daughter Margaret on the violin and son Edgar on cello.    The New York Times described them as “a widely known musical group.”

Fred Sittig had returned to New York in 1914 after having studied music in Berlin.  While there he also acquired a wife, Emilie, who was a Berlin native.  Emilie, who was Americanized upon their marriage, was the only non-musical member of the family.  A year after Emilie’s death in 1932 at the age of 58 the Sittigs were still living at No. 167.

In the meantime, Frank B. York was living next door at No. 169 with his family.   For years he had been the legal adviser for the Brooklyn Dodgers baseball club and finally, in February 1930, became the club’s President.  York held the position of Dodgers President for two years.  He died on pneumonia on February 3, 1937 at the age of 59.  The family continued on in the 80th Street apartment.

Expectedly, not every tenant of the two buildings was as upstanding.   On Tuesday morning, April 21, 1924, Bernie Prince said good-bye to his bride of two weeks at the door of their apartment in No. 167.  The next time she opened it there would be Federal agents on the other side.

Prince crossed the river to Newark where he entered the candy store of George Tillian on Broad Street.  He handed Tillian a $20 bill, but the store keeper was unable to make change.  When he took it to a near-by bank to have it broken, the teller recognized it as counterfeit.  Policeman Simms went back to the candy store with Tillian and arrested him.

As it turned out, Bernie Prince was no small-time counterfeiter.   He was held in $10,000 bail, charged in a plot “to flood the United States with bogus $5, $10 and $20 banknotes,” according to the Secret Service.

In a statement the Service said “For a long time the Government suspected that bands of counterfeiters in Europe, particularly in Russia and Poland, had been turning out large quantities of bogus American bank notes and were disposing of them through agents in the principal cities here.”

While Secret Service agents were on the way to Newark to pick up Prince, two others headed to West 80th Street.  They found Mrs. Prince in the apartment as well as “four spurious $20 banknotes on a table and two others between the leaves of a Bible.”  The newlyweds were both arrested.