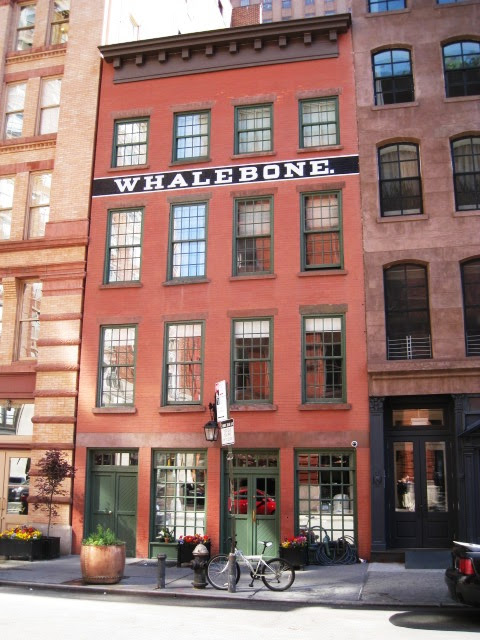 In 1870 the History of The Public School Society of the City of New York recorded that “During the summer [of 1832], School No. 5 was opened at 161 Duane street, under the care of Jane A. Parker.”  School No. 5 was different from most primary schools in the city.  Run by the Manummission Society, it was an “African School;” one of several established for the education of black children.  By 1836 The New York Annual Register counted 116 boys and girls attending the school.

The book explained a name change six years later.  “At the meeting of the board, held May 4, 1838, a petition from the teachers…was presented, asking that the name be changed.  After some discussion on the matter, the petition was responded to affirmatively, and the title of the schools was changed to “Colored,” in place of “African.”

The building used by School No. 5 was also headquarters for the Philomathean Society.  Formed in 1829 by members of the New York African Society for Mutual Relief, it offered weekly debates and lectures.  It was here on August 1, 1834 that members celebrated Great Britain’s abolishment of slavery.

Among the most vocal supporters for equal rights was Peter Augustus Jay, son of John Jay.  In his active pursuit of great freedoms for black Americans, he became President of the New York Manumission Society in 1816 and President of the anti-slavery New York Public School Society.  His death struck a blow to the black community.

On March 18, 1843 the New-York Daily Tribune reported on “a very large public meeting of colored citizens, held on Monday evening, February 27, 1843, at the Philomathean Hall, 161 Duane-street, for the purpose of expressing sentiments of condolence with the family and friends of the lamented Philanthropist Peter Augustus Jay, Esq.”

Only a few months after that meeting, the school and hall would be demolished.  Anne Van Riper erected a 24-foot wide, four-story brick-clad structure.    Completed in 1845, the vernacular Greek Revival building wasted no money on extras.  Simple brownstone sills and lintels marked the windows.

Anne Van Riper was listed in city directories as running a boarding house.    But she had not turned her back on the black children.  The Manual of the Corporation of the City of New York listed Colored School No. 5 on the “upper floor of dwelling” here as late as 1849.

If No. 161 was ever, indeed, a boarding house, that was no longer the case by 1858.  That year P. U. Morgan’s spice and coffee store was on the ground floor and J. T. Mesa’s printing shop was on the second.  A fire broke out around 10:00 on the night of April 5.  Before it was extinguished Morgan suffered about $1,000 in damages and Mesa around $500.  The New York Times reported “The building was damaged to the extent of $500—all insured.”

In 1864 John Tucker was awarded a “permit to use sidewalk;” presumably to exhibit his wares.  Upstairs William Forster, “whalebone manufacturer,” ran his operation.  Forster was apparently the first in what would become a long tradition of whalebone firms in the building.

Throughout the second half of the 19th century, into the 20th, whale bones (actually baleen) were an important element in Victorian life.  They were fashioned into the stays of tortuously confining corsets, were used in hoop skirts,  as collar stays, and parts of buggy whips and toys.  Whalebone was also used as a substitute for ivory in manufacturing piano keys, walking stick handles or chess pieces.

On February 8, 1864 William Forster advertised in the Staats-Zeitung for a boy who spoke German.   The ad was read by 15-year old George Messmann whose father had immigrated from Germany in 1848.  Messmann later reminisced “He came here with very modest means, and the family grew faster than his purse.  I was one of five boys and as soon as I had got a public-school training, it was made plain to me that I should have to do something toward my own support.”

George Messmann appeared at No. 161 Duane Street with a good understanding of German, but limited fluency.  “So, with some other youngsters I mounted the steps to Mr. Forster’s office,” Messman later related to Robert G. Skerret of The Literary Digest.  “We were asked a few questions and then called upon to write the proprietor’s name, and right there my school served me well.  Mr. Forster liked my writing and told me to report the next morning at half-past seven.”

Young George Messmann was put to work sweeping the shop, then set to counting tiny rods of whalebone.  He was given the salary of $2 per week.  Forster’s decision on a shop boy would change the course of No. 161 Duane Street.

By 1872 Forster’s manager, Adolph J. Vetter, had purchased the operation.  He leased the entire building from C. B. Vidal in 1884.   In the meantime, George Messmann had graduated from shop boy to learning the trade, and eventually became Vetter’s foreman.   By saving his earnings, he was able to buy out Vetter on May 1, 1890.  The successful business was cutting and selling between 10,000 and 30,000 pounds of whalebone per year.

The same year that Messmann took over the business, The Pacific Whale Company was founded.  The massive enterprise drove most of the small whalebone companies out of business.  Messman later told The Sun, “everybody advised me to quit then.  But I wouldn’t.  I was obstinate.”

George Messmann painted WHALEBONE across the façade of the building.  “I had that sign painted large and white because I learned as a mere lad that advertising pays,” he told Robert Skerret.  Then, for additional income, he moved the office and salesroom from the first floor.

He told a reporter from The Sun in 1920, “I moved the old desk, work tables, safe, one of the first of the Herring variety, upstairs and fitted up the first floor of this building, which I own, as Ye Olde Tavern.”   The tavern would become a neighborhood fixture for decades.

Advertisements for Ye Ole Tavern boasted “unique surroundings.”  And indeed they were.  Designed by Charles R. Hester, president of the Hester Decorating Company, The New York Times deemed it “the first restaurant of that type of decoration.”  Hester created a stage-set-like environment of an old English pub.  It was discovered by college fraternities and became a favorite watering hole.

On December 1, 1905 the Delta Upsilon Quarterly reported, “After the Cornell-Princeton football game, many of the alumni and members of the Cornell chapter with their wives, sweethearts and sisters, dined and spent the evening very pleasantly at Ye Olde Tavern in Duane St.  Arrangements had been made by Brother Dresser ’00, to give Delta U the exclusive use of the place for the evening and the ladies and undergraduates had the pleasure of seeing the old grads do the stunts for which they were famous in college.”

And two years later The Sigma Chi Quarterly reminded alumni, “When any Sig is in New York on Saturday, he should not forget the Ye Olde Tavern, 161 Duane Street, near Chambers Street 'L' station.  He will always find some of the boys there between 1:30 and 2 P.M. with a warm welcome.”

While Ye Olde Tavern was doing well, Messmann’s whalebone business was not.   On May 8, 1904 The New York Times ran a headline reading “Whalebone Very Scarce.”   Decades of wholesale killing of whales for their oil and baleen had decimated the population.  George Messmann explained “The scarcity is the result of poor catches for several successive seasons.”

The business was also heavily affected by changes in fashion.  The corsets of the 1880s and ‘90s were no longer fashionable.  Also, as he told The New York Times, “Automobiles hurt us.  You don’t need a whip for an auto.”   One by one Messmann laid off his employees until his staff was reduced from 25 to just 6 in 1901.

George Messmann was a traditionalist and refused to update his operation.  “We never changed any of the good old ways here,” he told a reporter from The Sun in 1920.  “We have always burned gas and never had a telephone.”  He explained to Robert Skerret “I could not take kindly to the telephone in business.  You see, many of our customers have been of the feminine sex, and women are just naturally a bit impatient.  I realized that with a telephone at hand I should have to give a good deal of my time explaining why I had not delivered orders for whalebone  I knew that they would get the stuff as soon as it was ready, so why waste time talking about delays that could not be helped.”

In June 1920 George Messmann closed the last whalebone shop in New York City.  Along with the shop, Ye Olde Tavern closed as well.  He told a reporter from The New York Herald “Yes, there has been some excitement and a little adventure in the whale cutting business.  I would like to go on with it to the end and I know that I am going to be terribly lonesome when I stop coming down to the old workroom, but it seems the only way left, for they have taken the business away.”

No. 161 Duane Street was quickly taken over by shoe makers.   In September 1920 the Eureka Shoe and Findings Co., Inc. had its offices here; and the following year Nu-Way Shoe Co. was in the building.  On August 20 that year Nu-Way Shoe advertised for traveling salesmen: “Cracker Jack men familiar with the states of Pennsylvania, Michigan and Ohio to handle our line of children’s, growing girls’ and women’s staples and up to the minute novelties.”

In 1934 the ground floor where college boys reveled in Ye Olde Tavern was taken over by the New Duane Luncheonette.   For years in the 1980s and ‘90s it was home to fish sellers L. Petrosino & Sons.

By now the Tribeca neighborhood had been rediscovered and former loft spaces were being transformed to luxury residences.  Around 1997 as famed chef David Bouley was renovating the hulking building at No. 36 Hudson Street, he announced plans to demolish No. 161 because its floors did not align with the larger structure.  The Landmarks Preservation Commission stepped in and a more creative way of melding the two buildings into a single residential property was agreed upon. 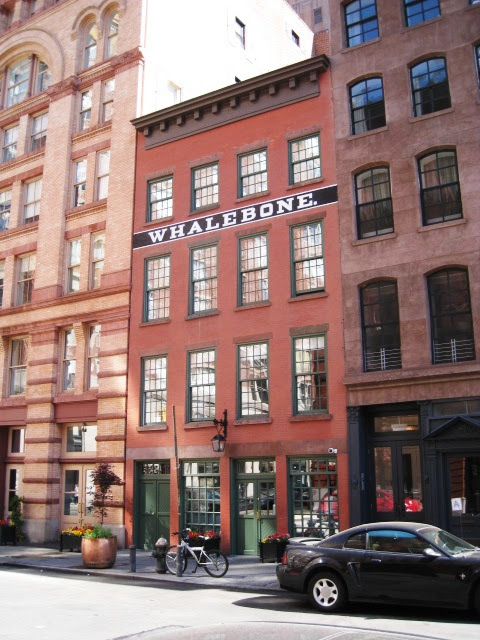 Today the 1845 building sports a replacement cornice and George Messmann’s painted WHALEBONE sign has been revitalized.  Although the interiors are gone, No. 161 Duane Street boasts one of the most colorful histories in the neighborhood.