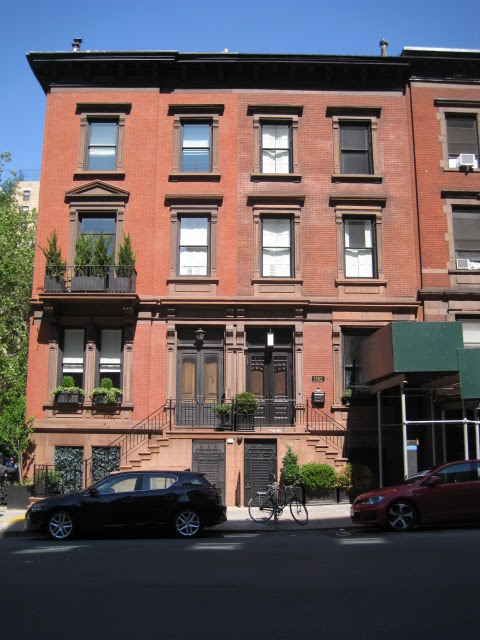 Born in Germany, the multi-talented Adam Weber not only established the firm of Adam Weber’s Sons, he was highly involved in New York’s German community.  He founded the German Exchange Bank and the Germania Bank and was instrumental in the formation of the Union Square Bank.

An architect and builder as well, his firm manufactured “fire bricks.”  American Gas Light Journal would remind readers on September 26, 1904 that he “was one of the pioneers who blazed the way for the scientific manufacture of fire-clays in different shapes and forms.”  He was the first to manufacture fire-clay gas retorts to the U.S.

Around 1885 Weber designed two nearly mirror-image homes at Nos. 1368 and 1370 Lexington Avenue. Within three years they would be renumbered 1380 and 1382.   The neo-Grec residences were faced, not surprisingly, in red brick and sat on brownstone basements.  The up-to-the-minute homes were intended for financially-comfortable families.  No. 1380, at the northwest corner of 91st Street, was given a few extras—not only did the corner location provide additional windows and sunlight; the house boasted a small balcony at the second floor and an angular projecting bay at the side.

No. 1382 became home to Adam’s son, Oscar Bismarck Weber and his wife Laura.  Immediately upon his graduation from the College of the City of New York, he had entered his father’s business, the fireclay works of which were located on East 15th Street.  When Adam Weber retired in 1890, Oscar took over the presidency.

Like his father, Oscar involved himself in the German community.  A lover of music, he was a member of the Liedekranz and Arion Socities of New York—two German singing organizations.   Although American Gas Light Journal described Oscar Weber as “robust, jocund, smiling, jollying,” he developed liver disease; “the ravages of which he fought with vigor and not complainingly,” it said.

In September 1904 Weber underwent a liver operation.  He was taken to the Stratford hotel to recuperate; but it was not to be.  He died there on the afternoon of Friday September 16 at the age of 45.   His funeral was held in the Lexington Avenue house the following Monday at 11:00 a.m. 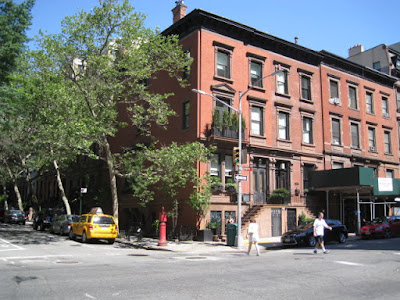 By the turn of the century that house seems to have been operated as a boarding house.  In 1901 Mrs. Theresa Reinach, a notary public, lived here, as did Paul Weber.  Apparently not related to Adam Weber, Paul was arrears on his personal taxes that year. By 1904 Dr. Homer B. Sprague was seeing his patients in the house.

Almost immediately after Oscar Weber’s death, No. 1382 became home to another general contractor, Edmund D. Broderick and his wife, the former Gertrude Lantry.  The wealthy contractor was responsible for the construction of scores of New York City buildings.  Gertrude died in 1907 and Broderick later remarried Elizabeth Farrell.  The family would remain in the house for decades.

By 1918 the corner house had been purchased by Louis C. Bock and his wife, Marie.  Bock ran a successful livery business at No. 169 East 87th Street.   On May 2, 1920 the couple would announce the engagement of their daughter, Marion Eleanor Bock, to John Huchinson Marsh.  Within the year they sold the house to Dr. Daniel P. Morse.

Morse’s deceased father had also been a physician.  Daniel’s mother, Grace, moved into No. 1380 with the family; however she died soon here on November 13, 1921.  As was customary, her funeral was held in the house two days later.

The advantageous corner site made it possible for Daniel Morse to have a private garage constructed on the property in 1922.

The Broderick and Morse families would remain neighbors for years.  In 1930 Katherine Broderick married Joseph Lorenz; and in 1936 her mother, Elizabeth, died in the house where she had lived for more than three decades.

In 1939, the same year that William H. Morse married Jean Millett, the 70-year old Edmund D. Broderick died.  Among the notable structures he had built were St. John’s Church and school, Our Lady of Mercy Church and rectory, and the School of the Nativity (all in Brooklyn), and Manhattan’s St. Leo’s Church.

Daughter Katherine Lorenz converted No. 1382 to offices, with a caretaker’s apartment on the top floor.  She retained ownership until September 1946.

Dr. Daniel P. Morse was still living next door.  He stayed on until April 1953 when he sold the house to playwright Augustus Goetz.   Goetz and his wife, Ruth Goodman Goetz, had collaborated on plays and motion pictures since 1930; but they were finally seeing success.

In 1947 their dramatization of The Heiress by Henry James was a hit.  It was their fourth play and Basil Rathbone starred in the Bilmore Theatre production.  Two years later it was produced by Paramount Pictures with Olivia de Haviland, Montgomery Clift and Miriam Hopkins in the cast.

The couple continued working on plays from No. 1380 Lexington Avenue.  The Immoralist, was staged in February, 1954, shortly after they moved in.  An adaptation of Andre Gide’s novel, it was sponsored by Billy Rose and starred Geraldine Page and Louis Jourdan.

At the age of 56, Augustus Goetz died on September 30, 1957, after an illness of only two weeks.  The house was converted to apartments; but it would not be the end of theatrical connections here.

In the 1960s Broadway director Sidney Lumet had an apartment in the building.  It was the scene of the wedding of Lyn Redgrave and John Clark on April 2, 1967. The 23-year old actress had just been nominated for an Oscar for her performance in Georgy Girl.  Clark had been a child star in Britain.

The celebrated guests included Redgrave’s father and mother, Sir Michael Redgrave and Rachel Kempson, and her sister, actress Vanessa Redgrave (who was also nominated for an Oscar at the time for her role in Morgan).


Both houses have been restored to single family residences.  An unexpected amount of original interior elements survive; offering a glimpse of the lifestyles of the upper class families who lived here in the 1880s.