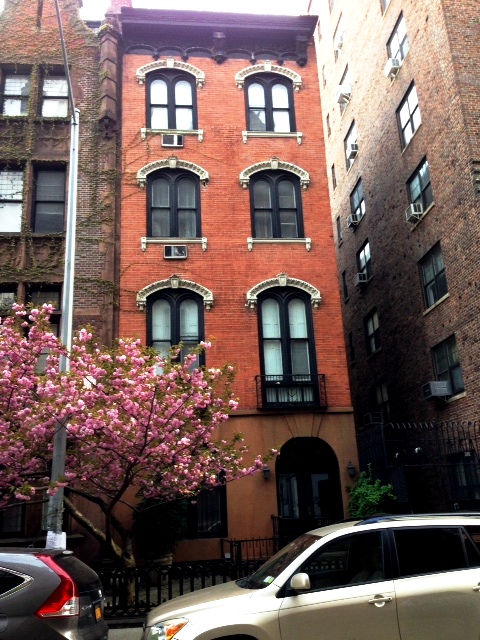 Speculative builder Robert C. Voorhies was busy in the developing neighborhood around Stuyvesant Square in the early 1850s.  In January 1852 he purchased the eight building lots stretching from No. 206 to 220 East 16th Street for $16,200—in the neighborhood of $512,000 per lot today.  By November the row was completed.  Voorhies made a quick and handsome return on his investment, selling the houses for $11,000 each.

Designed in the Anglo-Italianate style, the houses were entered nearly at sidewalk level.    Rising throughout the city at the same time were rows of Greek Revival homes—their steep brownstone stoops clearly delineating each property.  Without stoops, the Voorhies houses flowed together almost as a unit, making their somewhat narrow proportions less noticeable.

Anchoring the western end of the row was No. 206.  Identical to its neighbors, it sat far back from the property line allowing for an ample yard behind a low Italianate iron fence.   The up-to-the-minute Victorian details included double doors within the brownstone base; elaborate cast iron lintels over paired, arched windows; and an eye-catching arched and foliate frieze below the bracketed cornice. The financially-comfortable owners of No. 206 East 16th Street included Frederick Hyde, who sold it in December 1872 to Jacob Russell.  As was customary, the title was put in the name of Jacob’s wife, Abbie. W. Russell.

By 1884 it was home to Henry Clay Miner who was well known in New York theater circles.  An impresario, he operated a number of prominent theaters, most notably the Bowery Theatre.  It was Miner who pioneered the concept of circuits—booking acts into a string of popular venues rather than a single theater.  By the time he purchased No. 206 he had grown wealthy.

But like the Russells, Miner would not retain possession long.  He quickly sold the house to Johanne Hesse who resold it to John C. Oscar in 1886 for $1600.  The house would finally have a long-term owner when Oscar sold it to attorney Thomas M. Canton and his wife Susan by 1889.

In addition to his legal work as a defense attorney, Canton was a Commissioner of Deeds.   He had arrived in New York from Dublin in 1849 at the age of 20.  In 1859 he and Susan were married.  At the onset of the Civil War he enlisted in the 69th Regiment and served with the Army of the Potomac.  He had reached the rank of first lieutenant before his first battle—Bull Run.  His military service ended when he was wounded on August 25, 1864.  He was twice brevetted for bravery, earning the rank of Colonel.

Susan M. Canton was 75 years old and in failing health in January 1907.  On Thursday, February 7 she had contracted pneumonia and was “plainly in a dying condition.”   A trained nurse, May R. Traub was called to the house to attend to her.   She later described Susan’s condition saying “Mrs. Canton was so ill and weak that she could not hold a spoon in her hand” and “she was delirious.”

Thomas Canton had been sitting up with his wife since midnight the day before.   Susan’s niece, Emilie Randall, “an actress,” and a nephew, John Hepenstall held vigil as well.   When, after more than 24 hours with no sleep, Canton went upstairs to bed, the relatives jumped into action.

Around 2:00 in the morning they found a notary to draw up a new will, dividing Susan’s entire estate of around $15,000 to them.   According to court papers later, “the dying woman was propped up with pillows and her lifeless hand was drawn over the paper in imitation of a signature while she was practically unconscious.”

Emlie hid the will and three hours later Susan M. Canton was dead.   The grieving Thomas Canton had no idea of what had transpired while he slept.  Susan’s funeral was held in the house on Sunday afternoon, February 10 at 1:00.

Canton was stunned when he obtained letters of administration on the estate and found he had been removed from the will.  What followed was a long court battle during which time the will was held up.  “Surrogate Beckett says that the drawing, signing and witnessing of the will were plainly done in a great hurry and under circumstances that warrant the Court in refusing to admit it to probate,” reported The Sun.

The attorney representing Emilie Randall (consistently referred to as “an actress” in the press) and John Hepenstall attempted to prove that “the Cantons had not been happy in the closing years of their lives.”  The judge was unmoved by the argument.  The Sun reported on March 22, 1908, ‘the Surrogate holds that ‘bickerings, disagreements and jealousies’ that existed were not remarkable in a couple who had been married for forty-eight years and that they had lived together in as much peace and harmony as could reasonably  be expected.”

On March 21, 1908 Surrogate Beckett ruled in favor of Thomas Canton saying “the will was drawn when Mrs. Canton was so near death that she did not realize the importance of the act.  He said that “influence was used to prevent the property from being left to her husband.”  In reporting on the decision the New-York Tribune reminded readers “Miss Randall is an actress.”

Although he was 79 years old at the time of the decision, Canton quickly remarried and rewrote his will, leaving his entire estate to his new wife. 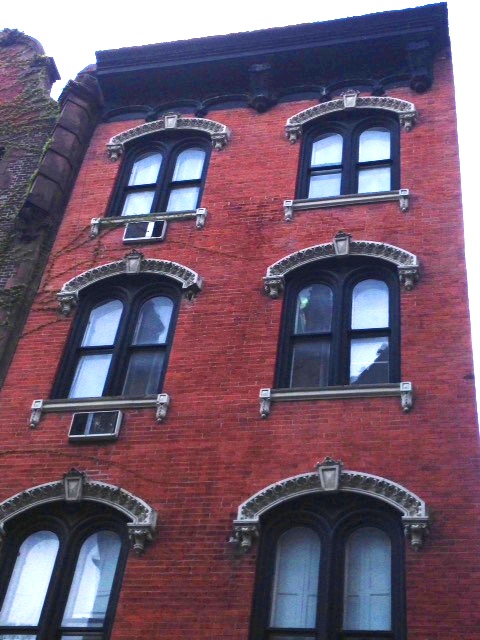 On April 22, 1912 the Veterans’ Corps honored Thomas Canton at a banquet in the Union Square Hotel.  It was the 51st anniversary of the day his regiment was deployed to the South.  He was, as reported in The Evening World the following day, the “only survivor among the thirty-three officers of the Sixty-ninth Regiment who marched down Broadway April 23, 1861, on their way to the civil war.”

The ugly incident that had surrounded Susan’s will stayed with Canton.  On March 4, 1913 he added a codicil to his will.  His fear of connivers trying to get part of his estate was obvious in his wording.

Dating it “Wilson’s Inauguration Day” he still left everything to his wife, Minnie, but explained “The will written on the preceding was written by the testator without the influence of any person.  After due deliberation I believe the provision I have made for my wife is the best I could have made for her.  In a former will I devised her my real estate in fee simple.  I have made the change entirely with a view to her interest, which by care will return a moderate income for life.  I feared that if she had the power of sale or mortgage it would pass out of her hands, as frequently happens to inexperienced women.”

By now the Canton house had been architecturally separated from the rest of the row.  In 1902 the abutting houses at Nos. 208 and 210 had been drastically redesigned for use as a deaconess house for nearby St. George’s Church.

Following the end of World War I No. 206 East 16th Street became home to English-born Ernest Kilburn Scott.  A consulting engineer, he had served with the ministry of munitions for two years; part of the time with the explosives department.  He remained in the house at least into the 1920s.

In 1944 furnished rooms were being rented in the once proud house.  Three years later it was converted to apartments—one on the first floor and two on the second—with furnished rooms on the upper stories.

Another renovation came in 1962 when the first and second floors were converted to a duplex apartment, and the third and fourth converted to one apartment each.

The narrow Victorian house is remarkably intact.  Although it is somewhat upstaged by the romantic Rainsford House next door, it survives as a lovely example of mid-19th century architectural style.

photos by the author
Posted by Tom Miller at 3:20 AM