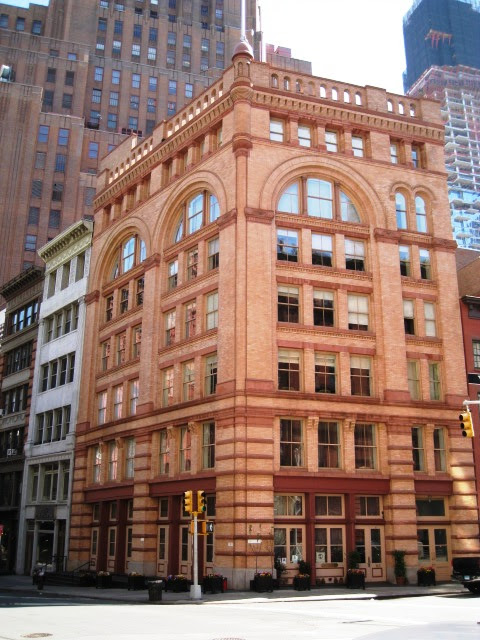 Born in Germany in 1856, Charles H. Selick arrived in New York at the age of 14.   He was put to work as an office boy in a bakery.   Before long the aggressive young man became a partner in Mills, Wood & Selick, a supplier and manufacturer of confectioners’ supplies.

That firm was dissolved in 1878 and two years later Selick and his former partner, Charles Wood, formed Wood & Selick.  While their focus was on bakery and candy-making supplies, they made a side product—W & S Cough Drops.   National advertising and innovative marketing—like pressed glass candy dish-like packaging—made the cough drops a huge success.

Wood & Selick’s sales rooms, factory and offices were located at No. 39 Jay Street.  By 1888 they were employing 50 full-time employees.  According to Illustrated New York: The Metropolis of To-Day that year, “their trade now extends throughout all sections of the United States and Canada, and is steadily increasing, owing to the superiority, quality, purity, and excellence of their productions.”

The book insisted that the W & S Cough Drops were a near cure-all.  “They have a most excellent effect and purify the blood, and are recommended and prescribed by eminent physicians for coughs, colds, etc., and particular for all bronchial and throat diseases.”

Indeed, Wood & Selick’s business was quickly becoming so successful that the Jay Street building was no longer adequate.  On November 7, 1891 the Real Estate Record & Builders’ Guide reported that architects Babcock & Morgan had filed plans for a “seven-story brick warehouse” at the northeast corner of Hudson and Duane Streets in the developing wholesale grocery district.  The architects estimated the cost of construction at $75,000.

Babcock & Morgan specialized in commercial structures.  For Wood & Selick they produced a Romanesque Revival beauty faced in yellow brick and trimmed in stone.  The heavy bulk of the structure was reduced by great, soaring six-story arches and stone bands that divided the block into three sections.  The building, completed in 1892, was crowned with an eye-catching arcaded parapet.

Among Wood & Selick’s employees in 1896 was Jeremiah Sauer who resigned in September to open his own similar supply firm.  Sauer opened his new enterprise at No. 93 Warren Street and devised a clever plan to obtain merchandise cheaply.  He would simply steal it from his former employers.

He recruited shipping clerk Joseph Levick, driver John Kessler and another Wood & Selick associate, Louis Ponto, as conspirators in his scheme.   Levick would remove Wood & Selick’s name and other identifying marks from barrels and boxes of supplies, and then Kessler would load them onto his delivery truck.  The driver took them to the Montclair Express Company in New Jersey where the goods were shipped back to Sauer in Manhattan.  The system successfully buried the trail of the stolen merchandise.

It all worked beautifully until February 1897 when another Wood & Selick associate, Charles Benkesser, discovered the thefts and informed on the crooks.

The trial of the men opened on April 12, 1897.  The evidence, heavy barrels and kegs of acids and extracts, created an amusing scene for reporters.  When Assistant District Attorney Mitchell tried to give the clerk a barrel to mark as Exhibit A, he was unable to lift it.  It took three court officers and Mitchell to roll the barrel behind the clerk’s desk.  The New York Times reported “In marking the other exhibits, the clerk went to the barrels,” instead.

By the turn of the century the firm had acquired yet another building, on Thomas Street, for its retail operation.  It had apparently branched out to baking, as well, advertising in The Sun on August 30, 1900 for a foreman.  “Must be first-class on all kinds of bread; wages $20.”

On April 26, 1908 the 52-year old Charles H. Selick died after a four-week illness.  The New-York Tribune said “He was said to be the oldest man in the bakers’ supply business.”  The Hudson Street building was owned by his wife, Caroline.

Ten years later Caroline Selick commissioned architects Townsend, Steinle & Haskell to renovate the building.  The $5,000 in alterations, according to the Record and Guide on January 19, 1918, “consist of interior changes to meet new Fire Dept. regulations, enclosing stairs and fireproof partitions, masonry, etc.”  Caroline would later transfer title to the property to Wood & Selick.

For 27 years John Henry Dayton had been the firm’s engineer—the man responsible for the boilers and other such equipment.  Stricken with influenza, on Monday, February 17, 1919 the 68-year old Dayton realized he was near death.  He partially revealed from his death bed a secret he had held for three years.

According to The Sun “His friends knew he had an aversion to banks until recently at least, but didn’t know just why.  Dayton was not in the habit of telling his secrets; he minded his own business and by the same token was not inquisitive regarding the affairs of others.”

Dayton lived with his wife, the former Clotilde Torrone, at No. 73 Varick Street.    His first wife had died several years ago and he had recently married the Italian immigrant who was at least 40 years younger than he.

He managed to tell her that he had buried his life savings--$7,375 in gold coins—in the basement of the Wood & Selick building.  Unfortunately, Dayton died before giving the exact location.   Four days later a headline in The Evening World read “Search For Buried Gold Long Hidden Under Store.”

The Sun added “In a cellar at Hudson and Duane streets, in a quarter of the city where the boot and shoe trade rubs elbows with wholesale groceries and everything is supposed to be as prosaic as the trucks that forever mingle their rumbling with that of the elevated railroad and the rolling of barrels across sidewalks, a hunt for buried treasure is going on.”

The newspaper reported that “employees of Wood & Selick are methodically digging up the cement floor of the engine and boiler rooms at 36 Hudson street and tapping the walls for possible hollow places.”

The Building Department got involved to ensure that the foundation was not compromised by the excavation; and watchmen were stationed day and night to guard the premises. Whether Dayton’s buried fortune was ever found is unclear.

In 1951 Charles Triller was President of Wood & Selick, which still operated from its venerable Hudson Street building.  He was also Chairman of the Board of the New York Philharmonic-Symphony Society.   He stepped down from the presidency of Wood & Selick in May that year to accept the position of Chairman of the Board.  A week later, on May 21, just as the firm was preparing to announce the changes, Triller died.

The death of the 95-year old was somewhat symbolic of the changes taking place within Wood & Selick.  A month earlier The New York Times had reported that Harold E. Selick “and others” had sold the Hudson Street building, along with No. 86 Thomas Street.  It was the end of the line for Wood & Selick in their yellow brick building after nearly 60 years.

The building quickly became home to firms like the United Transformer Company, and Carter, Mitchman & Frank, Inc., hardware and mill suppliers; both of which moved into the building in 1952.
The following decade Mitchell Bradie, Norm Denard and Lou Newman, co-owners of the Mohawk Electric Supply Co. purchased 36-38 Hudson Street.   The firm, originally the Independent Electric Supply Co., had been renamed in the Depression years when Jack Silvers (father-in-law of Mitchell Bradie) and Joe Pincus purchased the business.
Bradie and Newman bought out Norm Denard in the early 1970's.   Following Mitchell Bradie's death in 1994, Lou Newman continued operating the firm for a few years.  The family sold the Hudson Street building to celebrated chef David Bouley in 1997.

By then the Tribeca neighborhood had been rediscovered.  Former lofts were transformed to luxury housing, shops and restaurants.  David Bouley announced that Bouley International would open in the spring of 1998 in the former Wood & Selick building.

Elaine Louie, writing for The New York Times on March 13, 1997 said the project “will house a first-floor café, a second floor formal (expensive) restaurant and a third floor for private parties.  The fourth- and fifth-floor cooking school and library will be connected by a grand stairway to Mr. Bouley’s home on the top two floors.” 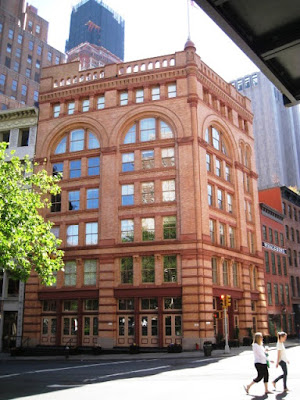 Plans changed and today, while David Bouley’s restaurant continues to operate on the ground floor, the upper stories have been converted to luxury apartments.   Little of the exterior has changed and Babcock & Morgan’s Romanesque Revival loft building is as impressive today as it was more than a century ago.

non-credited photographs by the author
LaptrinhX.com has no authorization to reuse the content of this blog