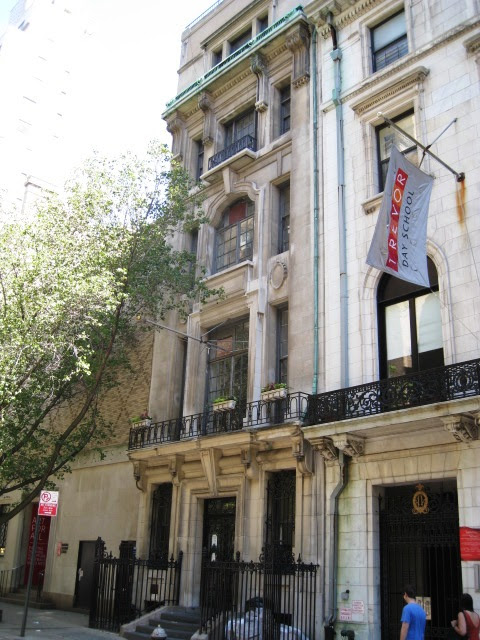 German-born artist and architect Friedrich Julius Oskar Blumner worked as a freelance draftsman at the 1893 Chicago World’s Columbian Exposition.  But after the exposition he found himself out of work and unable to find any.  In 1901 he moved to New York City where, once again, the unknown Blumner (he permanently changed his name to Oscar Florianus Bluemner in 1933) struggled to find employment.

One man who put his trust in the 34-year old was speculative developer Charles Glenn.  When Bluemner arrived in New York, the upper Fifth Avenue neighborhood was blossoming with lavish limestone and marble clad mansions.  Glenn had purchased the two building sites at Nos. 7 and 9 East 89th Street on which to build two high-end residences.  He turned to nearly-untested Bluemner to design them.

Construction was underway in October 1902 when the Real Estate Record and Builders’ Guide reported that the total cost of the project would be $150,000—about $4.2 million today.  Although five feet narrower than its next-door neighbor, No. 9 was still a commodious 23 feet wide.

The houses were completed in the first months of 1903.   Bluemner had produced two Beaux Arts mansions that coexisted handsomely without surrendering their individual personalities.  No. 9 was, perhaps, a bit more French in its details—the Parisian-style doors at the second floor balcony and similarly-treated openings at the balconette one story above.  The limestone-clad façade featured overblown brackets that supported the fourth floor cornice and an exaggerated keystone above the entrance that doubled as a bracket.

Bluemner used the American basement plan in his design—foregoing the high stoop New Yorkers had long been accustomed to.  The first floor, located just four steps above sidewalk level, contained minor rooms and service areas; pushing the main entertainment rooms to the second floor—the piano nobile.  One motivation for this plan was that it slightly removed the main rooms—the windows of which would be opened during the warmer months—from the odors and noises of the street.

In promoting the house in March 1903 Glenn said “Especial attention has been given by the architect to the provision of light, and the many up-to-date conveniences and sanitary equipments which contemporary demands exact.  The interior finish is of a superior quality and notable for elegance and style.”  Glenn boasted of the pair “In their design and construction they compare favorably with the finest houses on Carnegie Heights.”

On December 27 The New York Times announced “The name of Melville Stern, son of Louis Stern, the dry goods merchant, must be added to the list of those to whom Santa Claus was unusually kind.”  The article went on to say that the elder Stern had purchased the $175,000 house for his son.  The New-York Tribune added “it is generally understood that the deed was handed to him by his father as a Christmas gift.”

The younger Stern would not live in the 89th Street house overly long.  In June 1913 he sold it at a depreciated price of $145,000 to William Watson Lawrence.  Lawrence and his wife, the former Jane Yuile, would be here an even shorter time.

Lawrence was president of the National Lead Company, director of several banks, including the Seaboard National Bank, and head of the Pittsburgh-based paint manufacturing firm W. W. Lawrence & Co.  The couple had no children and had been married only three years when they purchased the 89th Street house. Lawrence was already 51 years old when he married the 31-year old Jane.

Lawrence could trace his American ancestry to an old Pennsylvania family of the 18th century.  He was a member of several of the city’s most prestigious clubs including the Princeton, the University and the Metropolitan Club; as well as similar clubs in Baltimore and Pittsburgh.

But only three years after moving in to his new house, on August 29, 1916 William Watson Lawrence died.  Jane received the entire estate of more than $1 million; however Lawrence provided for his alma mater, bequeathing Princeton University more than $750,000 upon her death.

Jane Y. Lawrence quickly sold the mansion.  On March 18, 1917 The Sun reported that “Edward Dudley Kenna, associated with Western railroads for many years as counsel and official, and author of ‘Railway Misrule,’ an authoritative treatise on railroad affairs, bought yesterday the fine dwelling at 9 East Eighty-ninth street, valued at $150,00.”

The newspaper introduced its readers to the new man in town.  “Mr. Kenna now lives at the Metropolitan Club.  He is a Western man and has a fine dwelling at Colorado Springs.”

Kenna purchased the house when the neighborhood was being threatened with a new menace—the apartment house.  The grand mansions of Fifth Avenue and the blocks branching off it were being razed in place of modern apartment buildings—to the terror of wealthy homeowners who feared the ruination of their quiet blocks.   Behind No. 9 East 89th Street was an enormous plot of land on 90th Street that faced the Carnegie mansion—extending from Fifth Avenue nearly to Madison Avenue.  Just prior to Kenna’s purchase of No. 9, Carnegie discovered that Charles Gould was about to sell the 90th Street property for the site of a tall apartment house.

Carnegie quickly bought up the property.  In doing so he not only preserved block front facing his mansion as one of private homes; but saved Kenna’s rear view from being one of a brick wall of apartments.

While Kenna, his wife and their daughter Mary established themselves in their new home, their son R. Kerens Kenna was off fighting the war in France.  The family was happily reunited in February 1919 when Lieutenant Kenna returned from service and moved in.

The former army man slipped easily back into the social scene. A few weeks later, on March 11, The Sun reported that the entire family had arrived in White Sulphur Springs, West Virginia.   The resort and its lavish hotel, The Greenbrier, had long been a destination for America’s wealthiest families. “In the afternoon they rode to Forest Drive,” noted the newspaper.

The Kenna family schedule, like so many of Manhattan’s elite, was consumed with moving from place to fashionable place.  On April 26, 1919 The Sun kept its readers abreast of the Kennas’s summer plans, saying they “will go next week to their country place in St. James, L. I., to remain until the end of June, when they will go to Murray Bay, Quebec, for the rest of the summer.”

The elegant house on 89th Street was the scene of upscale entertainments during the winter season.  Society pages routinely reported about the Kenna suppers, dances and cotillions here until the house was sold to Charles Hallam Keep in the mid 1920s.

Keep had been Assistant Secretary of the Treasury under President Theodore Roosevelt and had held the position of State Superintendent of Banks.  He was highly respected in banking circles and had amassed a sizable fortune.

On June 20, 1929 the house was the scene of daughter Martha Gibson Keep’s wedding to Morris Shotwell Shipley, Jr.   It was a relatively quiet ceremony, “in the presence of members of the two families and a few close friends,” as described by The New York Times.  Despite Martha’s blueblood pedigree (“she is a descendant of Roger Wolcott, Colonial Governor of Connecticut, reminded The Times), the couple was apparently thoroughly modern.  “Mr. Shipley and his bride, after a motor trip, will live in New York.”

The Keep family would remain in the house until 1942, when it sold it to the American Institute for Iranian Art and Archaeology.   On November 13 The New York Times announced “The Institute has just taken title to this six-story, twenty-four-room house for its own occupancy and for its school of Asiatic studies…The building will house the institute’s collection of records, drawings, photographs and works of art, and will permit exhibits for the first time of its own discoveries of archaeological material heretofore kept from exhibition because of lack of facilities.”

The Institute and its related school were in the building only for five years.  In 1947 No. 9 was acquired as a gift by the American Friends of the Hebrew University, Inc.  The organization announced it would “use the property as its permanent home to serve as a coordinating center of activities and information.”

The American Friends organization served as the American liaison agency for the Hebrew University in Jerusalem.  It was heavily supported by Mrs. Felix M. Warburg and had as its chairman Albert Einstein.  From the house it would perform fund-raising events, purchasing for the University, public information services and arrangements for American students to study in Israel.

Among the highly visible fund-raising events held in the house was the art sale on May 4, 1958.  A crowd estimated at 3,000 filed through the rooms during the first two hours of the 5th Annual Exhibition and Sale.  Included in the more than 700 paintings and artworks were a Degas sculpture of a girl bathing and a bust of Albert Einstein by Sir Jacob Epstein.

It would be the last art sale in the house.  In the fall of 1959 the American Friends of the Hebrew University sold the property to the Child Study Association of America.  The Times described the group as a “non-profit organization, which aids parents who have problems in connection with their children.”

In 1981 the mansion was purchased by Fred Lebow and presented to the New York Road Runners as its headquarters.  It served for three decades as “a hub for runner services,” according to a spokesman.  Then, when the group outgrew the building, it was put on the market in 2014 for just under $25 million; opening the slim possibility of the Stern house being restored as a private family home.