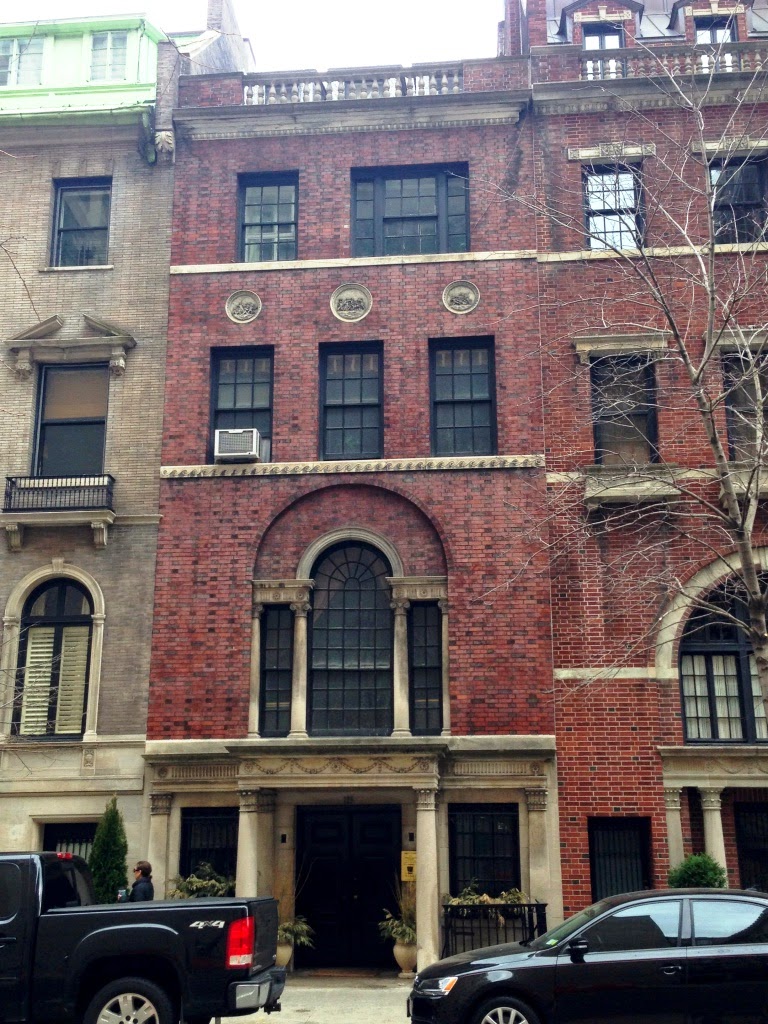 It was not grand mansions individually designed for Manhattan’s wealthy class that appeared east of Fourth Avenue (later renamed Park Avenue) in the 1870s.  Those palaces would be closer to Central Park and on Fifth Avenue proper at the time.  Instead, developers threw up rows of more affordable, speculative rowhouses aimed at the middle and upper-middle classes.

Christopher Keyes was one of these real estate operators and between 1872 and 1873 he erected 11 such homes on East 69th Street.  Designed by architect John Sexton, they stretched from No. 107 to 127 engulfing most of the north side of the block between Fourth and Lexington Avenues.  The four-story brownstones lined up like soldiers and attracted businessmen like Samuel Stirn.

No. 125 became home to Stirn—he was most likely the original owner.  He had come to America from his native Germany in 1847, settling in California.  After establishing a general merchandise business he made the grueling trip across the continent two years later, opening his Stirn Brothers store in New York with his brother Bernard.

In 1852 he married Johanna Michel and they had five children.  When he retired in 1868 at the age of 46, Stirn Brothers was, according to The New York Times, “one of the leading importing houses of this city.”  Now living at No. 125 East 69th Street he invested his time and money in real estate.  In 1893 Stirn (whose name was often misspelled as “Stern” in newspapers) recognized the potential of new technology and became a major investor in the Universal Electric Pull Socket Switch Company.

The Stirn family would stay on in the house until shortly after Samuel Stirn’s death.  On the morning of July 22, 1902 the 80-year old died in house he had called home for decades.  For two years the family leased No. 125 to the Somborn family.  Daughter Edith was enrolled at Barnard College in 1903 and was a valued member of the girls’ freshman basketball team.

Then on March 11, 1904 the Stirns sold the house to Mrs. Julia Friend.  She quickly turned the house around, selling it seven months later on October 4.  The new owner had big plans for the property.

James J. Van Alen had married Emily Astor, the daughter of William Backhouse Astor and his indomitable wife, Caroline Schermerhorn Astor—“the Mrs. Astor”—in 1876.  Emily died during the birth of their third child in 1881 and Van Alen essentially left the schooling and rearing of his children to tutors and relatives in England.  Now daughter May was not only one of the most eligible debutantes in Manhattan, she was the apple of her Grandmother Astor’s eye.

It was James Van Alen who purchased the old Stirn residence.  He set to work having the house remodeled into a suitable mansion for his unmarried daughter.  A month after the purchase The New York Times reported “Plans have been filed at the Building Department for the remodeling and enlargement of the four-story dwelling at 125 East Sixty-ninth Street, into a town house for Miss May Van Alen, daughter of James J. Van Alen.”

Van Alen had commissioned architect S. Edson Gage to do the make-over and plans were well underway.  The Times said on November 3, “A new façade of Colonial design is to be erected of ornamental brick, with stone trimmings, and having a portico supported by four columns.”  Gage estimated the cost of the renovation to be about $16,000 (a significant $400,000 in today’s dollars).

As contractors worked on the house, May steamed off to Europe with Caroline Astor.  A generation earlier a single woman living alone would have been scandalous.  Now, however, modern heiresses flexed their independence.  The Los Angeles Herald on July 30, 1905 referred to them as “bachelor girls in society.”

The newspaper said somewhat sarcastically, “She may design her own decorations, select her own furnishings, but she cannot carry her oft-debated plans out piecemeal and single handed as does her less wealthy sister.  A host of decorators and architects, art furnishers, picture dealers, curio and antique dealers wait upon her commands, and she must have her future residence rebuilt and furnished throughout in a style of approved elegance before she takes possession of it, if she is to merge independent existence successfully with her social career.”

To illustrate the point, the Los Angeles Herald turned to May Van Alen.  “Thus Miss Van Alen’s new house at 125 East Sixty-ninth street is being entirely made over for her occupancy.  S. Edson Gage, the architect, is remodeling the house on the style of the Adam houses, of which there are quite a number in London, but not many in New York.

“The house will have an entirely new façade, in the Adam style, made of ornamental brick.  The interior also will be entirely remodeled, and a thirty-three foot extension is being built across the entire lot.”  The newspaper described the street level entrance—all the rage in upscale residential architecture—and the servants areas to the rear.  On the second floor were the drawing room and dining room and one flight up were May’s bedroom and dressing room.  “The principal fireplaces will also be in the Adam style of decoration,” said the Herald.

With barely disguised disapproval the newspaper said of the group as a whole, “But the society bachelor girl is a bachelor girl without a chafing dish.  Incongruous though it may seem it is true.”  The writer compared the society bachelor girl's meals with those of the working girl.  “She has regular suppers prepared for her by cooks and butlers when she gives parties, and she never has midnight feasts of preserves on cheese—and calls it delicious.”

May and her grandmother were still in Europe on July 2, 1905 when The New York Times mentioned “The Newport season is never considered actually opened until Mrs. Astor arrives.”  Newport society waited patiently for the opening of her villa.  “With her will come Miss May Van Alen,” said the newspaper, “who has taken the Louisday house for the Summer.”

The summer season in Newport would give the contractors the time they needed to finish any details on the 69th Street mansion.  But May Van Alen would not spend a great deal of time in the completed house.  Summers in Newport and more and more time spent in London left the East 69th Street house empty for long periods.

For the winter season of 1910-1911 she leased the house to Arthur Iselin.  The son of the hugely wealthy William E. Iselin he had married Eleanor Jay in 1904.  Now 33 years old, Iselin was a well-known yacht racer and polo player.  The New York Times said “He is also an automobilist.”

Arthur Iselin noticed a problem with the ceiling in one of the servant’s rooms on the fourth floor.  Early in December 1912 he arranged for a contractor to look at it.  On December 6 the butler answered the door to find a “blond young man, offering the plea that he had come to examine a ceiling,” according to a report in The New York Times.  The man was wearing blue overalls and carrying a large leather tool kit.

The butler knew about the problem with the ceiling and, after hesitating a moment, brought the workman in.  Iselin was at his downtown office and Mrs. Iselin was out.  As luck would have it, the telephone was out of order.  The butler turned the man over to a maid, telling her he would phone Mr. Iselin from a neighboring house to inform him that the workman had arrived.  The maid ushered the workman to the fourth floor room, watched him tap and walls for a few minutes, then left him to his business.

Once alone, the man sneaked to the second floor bedroom of Mrs. Iselin where he helped himself to $1,500 worth of jewelry—brooches, bar pins, rings, and small articles—left in the drawers.  Although most of the most valuable items were locked up, in the adjoining room were several items that, in his haste to escape, the burglar missed.  Among them was a $40,000 diamond tiara.

Detectives surmised that the thief overheard workmen discussing the ceiling project and went to the address, waiting outside until the Iselins were gone.

Despite the theft, the Iselins continued to lease the house for at least one more season. But by 1917 Mrs. Gallatin was living on Gramercy Park and son Albert Eugene Gallatin was living at Np. 125 East 69th along with his sister Cornlia.  Sophisticated and learned, Albert was a member of the Society of Independent Artists and of the Grolier Club.  He was the author of Aubrey Beardsley’s Drawings, Whistler Notes and Footnotes, and other books.

In May 1919 Gallatin wrote to President Woodrow Wilson urging him to send artists to the front lines to document the war in Europe.  He proposed including a permanent pictorial history of the war on exhibition in the proposed $9 million National Soldiers’ Memorial in Washington.  He told reporters “I do not believe in posthumous paintings any more than posthumous portraits, and I abhor a fake battle picture.  If, as proposed, a museum is erected in Washington as a memorial, and in this is housed paintings by our really original and vital artists, showing the American occupation of the Rhine, American battlefields as they look now, the wonders that the engineers accomplished in building railways and docks, such a museum unquestionably would be the finest kind of memorial.”

Among the artists Gallatin had in mind were Childe Hassam, George Bellows, George B. Luks and Joseph Pennell.

That same year the owners of the brownstone next door at No. 127 commissioned S. Edson Gage to update their house, as well.  Gage’s resulting Adamesque residence beautifully harmonized with the Gallatin home, giving the impression that the pair had been constructed simultaneously.

Following the war Cornelia threw herself into work for disabled veterans.  The Junior League member was Treasurer of the Seamen’s Benefit Society and a member of the Citizens’ Committee of America.  That group was composed of leading citizens across the country and organized “for the purpose of arousing public interest in the welfare of the disabled veterans.”  The Citizens’ Committee was founded by Alfred FitzRoy Anderson.

Their similar interest in aid to the veterans resulted in the December 5, 1923 announcement by Albert Gallatin that his sister would be married to Alfred Anderson.  Albert gave his sister away in Grace Church in April 1924 and the reception afterward was held in the 69th Street house.

Just weeks before the wedding Gallatin had sold the house.  It became home to Wallace Reid and his wife, Emma.  Emma died in the house on Saturday, July 12, 1941 and Wallace stayed on for another three years.  The upscale neighborhood had drastically changed from the middle-class tone of the block in 1873.  When Reid sold the mansion to figure skater Oscar L. Richard on April 5, 1944 The New York Times remarked “Among the residents of this street are Mrs. Edgar S. Auchincloss, George B. Agnew, Ernest T. Carter and Eugene W. Mason.”

It appears that Richard was dabbling in real estate investing at the time.  “This is the sixth property to be acquired by Mr. Richard through the same brokers,” said The Times.  And indeed, within two weeks he resold the house to John P. Cunningham.

In 1950 the house was converted to apartments—a spacious duplex on the first and second floors, two apartments on the third floor and one on the fourth.  Today the Victorian brownstone that was converted to a lavish home for one of Manhattan’s most pampered Bachelor Society Girls is nearly unchanged since 1905 when she moved in.

photos taken by the author
Posted by Tom Miller at 3:08 AM