The Heart of Central Park -- The Terrace 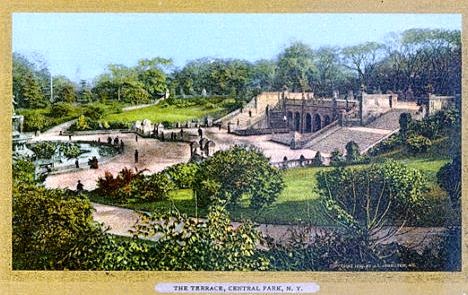 In 1857 the Central Park was laid out—hundreds of acres that would be devoted to public recreation and relief from the crowded urban streets.  The land chosen was so far north of the established city that one magazine writer scoffed “we might as well establish a park in the middle of the Desert of Sahara as to fence in this wilderness.”  Despite nay-sayers, Calvert Vaux and Frederick Olmsted’s ambitious project went forward.

Five years later excavation, construction, and plantings were well underway.  At the time ladies and gentlemen spent many weekend hours in the Victorian pastime promenading.  Following church services on Sundays, Fifth Avenue was crowded with well-dressed society people; as was Union Square and the upper level of the Croton Reservoir.  The necessity of a promenade did not escape Vaux and Olmsted.

Prominent to the architects’ plan was The Mall—a wide gravel boulevard where wealthy New Yorkers could show off their finery.  The Mall would terminate at its northern end with The Terrace, a two-level architectural jaw-dropper that harkened to the grand staircases of Europe’s largest cities and grand palaces.  Broad flights of two majestic staircases led down to The Esplanade where a fountain cooled the summer air.  Calvert Vaux, in describing The Mall and Terrace to the Park Commissioners in 1862 said “In the general design for the Park the Mall may be considered, with its accessories, an open air hall of reception for dress promenade.”

The Annual Report of the Board of Commissioners of the Central Park reported in 1863 that the Terrace was essentially completed.  But, “a portion of the connected ornamental work of the Terrace structure remains to be done.  Considerable progress has been made with this work during the last two years.”

That the “ornamental work” was not yet completed was understandable.  The ceiling and flooring of the passageway, or Arcade, below the Terrace was covered in Minton tiles—the first attempt at using the substantial material for a ceiling.  Many of the intricate Terrace carvings conceived by Jacob Wrey Mould, Calvert Vaux’s brilliant co-designer who is often overlooked, involved full-relief figures sculpted in deep recesses.

On  July 25, 1863 The New York Times brought readers up to date on the progress.  “The Mall is a beautiful walk, about three-eighths of a mile in length, shaded with elms and flanked with velvety sward of the brightest green.  At the end of the Mall is the Terrace, or open air place of recreation, which is constructed with considerable architectural ornamentation, having broad flights of stairs leading to a noble esplanade.  There are pedestals at the head and foot of each stairway, intended for various pieces of statuary, and vases of living flowers, while the vamps and balustrades of the staircase are embellished with sculptured flowers, fruits, birds and other objects, illustrative of Spring, Summer, Autumn and Winter.  In the centre of the esplanade a fountain is in course of construction and its effect will enhance the attractions of the place.”

Miller’s  Stanger’s Guide for the City of New York in 1866 urged tourists to visit The Terrace, saying it “is the principal architectural structure.  This terminates the Mall on the north; below it is the esplanade surrounding the main fountain.  The visitor will be well repaid by the examination of the design and execution of the detail of the stone work of the terrace.”

In 1871 the fountain received its centerpiece—the masterful bronze statue “The Angel of Water.”  The New York Times noted on July 19, 1871 that “The estimated cost of the fountain is $150,000.”  That figure would amount to about $2.75 million today.

It was just one more costly expenditure that did not escape the notice of the New York press.  Ten days later The Times reported that the city had paid out, to date, $7,344 per acre for the 862-acre project.  And although the newspaper jibed “Truly we must change the old nursery rhyme, to read: Mary, Mary, quite contrary,/How does your garden grow?/With golden shells and silver bells/And dollars, all of a row,” it was quick to point out what New Yorkers got for their money.  The Times said that the Mall was now complete “with an esplanade of cut stone, the like of which is not in the country, and its superior in few others.”

On the first beautiful Sunday in spring in 1872, Manhattan’s wealthy thronged to the streets.  On April 15 The New York Times remarked “Church in the morning, and a promenade in the Central Park and on Fifth-avenue in the afternoon, was the programme of many.”  The newspaper said that in the afternoon a wind whipped up, “But this was not much of a drawback to the tens of thousands who in the afternoon swarmed about the Central Park in a condition of the purest happiness.  In every direction one saw happy groups:  mothers breathing the pure, pleasant air with the brightening eyes and kindling cheeks, fathers holding young children by the hand, and accommodating their steps to the uncertain toddling of their young ones, youthful sweethearts locked arm in arm, as happy as could be, proud of their fine Sunday clothes, proud of each other, and reveling in the glories of the esplanade and the mall, young girls going in couples, looking arch and pretty, whispering comments upon the Spring toilets of their acquaintances, and giggling somewhat, as young girls will do.”

When James Dabney McCabe, Jr. wrote about the Mall and Terrace in 1882, he noted the use of the Arcade underneath.  “This magnificent apartment is used as an ice cream saloon.”   He called The Terrace, “one of the most imposing structures in the grounds,” saying it was “ornamented with exquisite carvings of birds, animals, fruits, etc., and beautiful tracery, cut in the soft stone work.  On the east and west sides of the stairways, the adjoining grounds are lavishly ornamented with flowers, and slope gracefully from the Terrace to the Lake.”

By the turn of the century the terms “terrace” and “esplanade” had become blurred and, as today, were often used interchangeably regarding the Central Park structures.  As Victorian tastes gave way to 20th century fashion, Jacob Wrey’s glorious Terrace was less-than-appreciated by many.  On December 16, 1906 The Times wrote “The Esplanade is the most pretentious architectural feature of the Park.  It consists of a Renaissance staircase gracefully tapering off into a Byzantine terrace, with Roman effects around the edges and Doric suggestions in the shrubbery, all leading up to a Rococo replica of a lake in the foreground or background, according to which way it strikes you.  The Mall is lined with statues and busts, intended, it is rumored, to beautify it.  I cannot see where people got that idea.  The majority of the statues do not bear out the supposition.  In fact, the busts of Burns and Scott ought to go to a hospital.”

Three years later The Terrace would suffer more than critical abuse.  Park Commissioner Henry Smith told reporters on August 18, 1909 that “sometime after dusk on Saturday evening a gang of vandals, supposed to have been boys returning from a baseball game, battered and disfigured the southeastern portion of the ornamental sandstone wall around the esplanade in Central Park.”

The boys destroyed 25 linear feet of the filigree carvings, punched holes through the foot-and-a-half thick wall, and knocked animal heads and posts off with their baseball bats.  The frustrated Commissioner said “I do not know what I can do to stop such outrageous destruction of property.  I have too few police, and they have their hands full.”
It would not be the last of the inexcusable vandalism of Mould’s magnificent work.  The second half of the 20th century was a dark time in Central Park.  The City’s financial crisis resulted in overgrown lawns, and trash-littered and algae-clogged ponds.  The Park, once crowded with visitors dressed in their finest, was avoided by most New Yorkers as muggers, drug dealers and other criminal elements took it over. 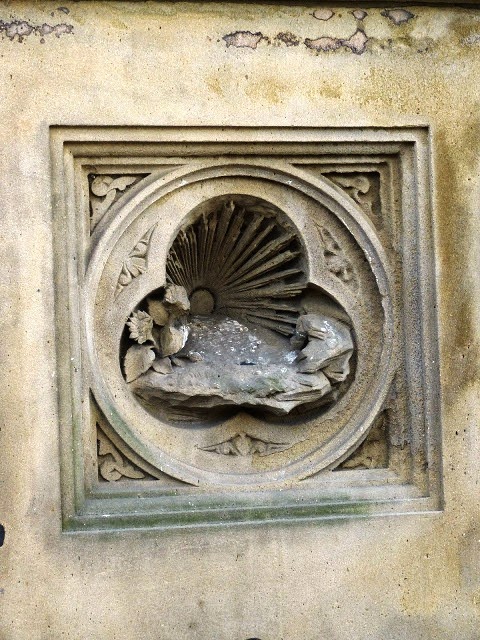 The Terrace became the target for vandals who broke off the heads of carved birds and figures, smashed architectural elements, and sprayed graffiti across the walls.  In 1985 the Central Park Conservancy initiated a $4.5 million restoration.  E. Timothy Marshall, chief of construction for Central Park, said the Terrace was in an “advanced state of decay.  The landscape was barren, slopes were devoid of grass, erosion had caused the land to push onto the lower terrace.  Carvings were missing, there were decapitated and de-winged birds.”

The grand sweeping staircases were torn out and reset.  Historic photographs and drawings of the carvings were studied for replacement elements.  Sculptors with the skills to reproduce the mid-Victorian carvings were found and they painstakingly crafted animal heads, stone twigs and other missing pieces. 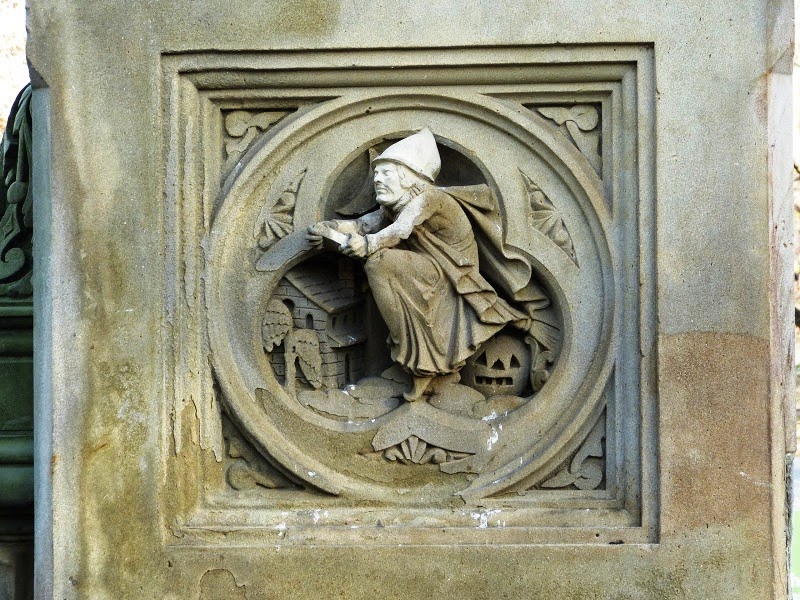 In May 1987 the Terrace was once again opened.  Nearly three decades later it is, as it was upon its completion in 1864, the heart of Central Park.