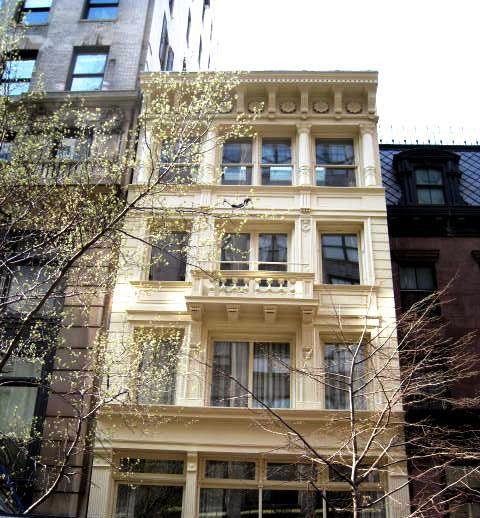 In 1851 as the expanding upscale residential neighborhood of Fifth Avenue spilled onto the side streets, attorney John Latson moved into his new home at No. 44 West 22nd Street.  The substantial 3-story, 23-foot wide home reflected Latson’s social and financial status.  Politically active, he ran for Trustee of Schools that same year and his name regularly appeared in newspaper articles on court cases or political issues.

A decade later, as the Civil War boiled up in the South, Latson affiliated himself with the elite Seventh Regiment.  On April 29, 1861 The New York Times noted “This Regiment is fast filling up, and Col. John W. Latson is doing all in his power to secure the comfort of all these volunteers who have enrolled their names.”

Included in his efforts “to secure the comfort” of the soldiers was the procurement of uniforms.  Before long, however, both Latson’s title of “colonel” and his good reputation would come into question.  On August 27 that year The Times followed up with a disturbing article.  “John W. Latson, a lawyer in this City, who has recently received newspaper notices as Colonel of the ‘New-York Horse Artiller,’ was yesterday brought before Justice Osborn, at the Tombs, on the complaint of Messrs. Bonnel Wilson, clothiers in Cortlandt-street, charged with having defrauded them of property valued at over $200, by means of false statements.”

It seems that Latson approached the men’s furnishings shop, asking for uniforms to be made and promising “he had full authority to draw upon the Government for all the goods he wanted, and no other Colonel had been similarly favored.”  When the clothiers asked for proof, he sadly admitted he had left his documents at home.

Although Bonnell had the uniforms delivered to Camp Low, Staten Island; his repeated efforts to get proof of Latson’s connection with the Government landed forced him to take the attorney to court.  The once-respected lawyer was exposed as a sham.

In the 1870s, as Sixth Avenue just around the corner began filling with the retail establishments that would form The Ladies’ Mile, Cambridge Livingston lived in the house.  For years the respected gentleman served as Treasurer of the Joint Committee on Ecclesiastical Relations and Religious Reform.

The change in the neighborhood was evident in 1889 when Elizabeth T. Belt was living here and applied for a $27,500 mortgage.  She then received a second mortgage of $4,500 and then a third of $2,150.  In 1891 she transferred the debt-ridden house to her daughter, Elizabeth M. Delabarre.  The end of the road for the once-elegant home was nearing.

Elizabeth Belt had married Walter E. Delabarre on December 23, 1889 and the couple lived at Asbury Park, New Jersey.  Perhaps her mother was prompted to give her the 22nd Street house by Elizabeth’s desertion of her husband, as alleged by Walter Delabarre’s divorce complaint.  Or perhaps she simply wanted out from under its financial burden.  At any rate, Elizabeth Delabarre was living on West 22nd Street by May 1890—less than six months after her wedding.  And she was as cash-strapped as her mother.

In May 1890 Elizabeth borrowed $500 (about $12,500 today) from Louis Silverman, a professional lender.  As guarantee, she gave him a “chattel mortgage” on her furniture and promised to pay four monthly installments of $175 each.  The following month she borrowed another $5,000, agreeing to pay a hefty $1,750 commission.

When Elizabeth stopped paying the notes as they came due; Silverman allowed her two months’ flexibility before starting foreclosing proceedings against her furniture.  On December 27, 1891 “the house at 44 West Twenty-second Street was entered by Silverman,” according to The New York Times, “and stripped of furniture alleged to be worth $15,000.”

Simultaneously, the crafty woman deeded the house to Hamilton H. Salmon “for the consideration of $3,100,” according to The New York State Reporter.  The agreement was that when she repaid that amount, Salmon would reconvey the premises to Elizabeth.

She then duplicated the deal, deeding the house to James W. Purdy, Jr. for $1,100.  A distinct problem arose when Elizabeth Delebarre was unable to pay either of the loans--just as she was unable to pay Louis Silverman.  When Hamilton Salmon and James Purdy discovered that they both held deeds to the same property, the tangled web landed Elizabeth Delebarre back in court in November 1892.

By now Elizabeth was no longer in her furniture-bare residence.  It was briefly home to Mrs. Margaret M. Barnard, the widow of the former President of Columbia College.  The sumptuous rooms once again were filled with fine paintings and costly furniture.  But Mrs. Barnard died within a few months of moving in and March 17, 1892 an auction of the Barnard furnishings was held in the house.

The Sun listed some of the items sold, including Mrs. Barnard’s collection of luster ware, which was purchased by Columbia College.  “Several antique desks, chairs, and settees were sold at good prices,” said the newspaper.  “A claw-foot mahogany and plush sofa fetched $84, and another of carved oak, dated 1667, was sold for $75.  An old hall clock that had stood in President Barnard’s parlor was sold to C. L. Pendleton of Providence for $100.  Ex-Judge Arnoux bought another old clock for $62.  A painting by George Inness, ‘Meadow Brook,’ went for $125.”  The Sun commented “it was worth more than that.”

Also included in the auctioned items were a chair dating to 1686 and a 1649 desk.

A block away, West 23rd Street had become the artistic center of New York City outside of Greenwich Village.  Four years earlier the Artist-Artisan Institute Building had been completed at Nos. 136-140 West 23rd.  The School for Applied Design for Women opened at the corner of 23rd Street and Seventh Avenue; the Associated Artists was at No. 115 East 23rd Street the School for Industrial Art and Technical Design for Women shared space with the Artist-Artisan Institute.

No. 44 West 22nd Street was now owned by Mrs. E. J. Robinson, and she recognized that the upscale residential days of the block were over.  She commissioned the esteemed architectural firm of DeLemos & Cordes to transform her old brownstone into a modern structure for artists’ studios.

Completed in 1893, the makeover was remarkable.  The architects removed the brownstone front and installed a cast iron Beaux Arts façade pulled forward nearly to the property line; and the structure was raised to five stories.  The pre-Civil War interiors—carved newel posts, marble mantels and intricate plasterwork on the ceilings—were gutted for light-flooded, modern spaces.  An eye-catching balcony embellished the fourth floor.

While the completed building filled with artists; at least one apparel company moved in—a hint at the coming incursion of the Garment District.  In 1894 Julius S. Stern was here, importing and manufacturing dress trimmings.

Among the first artists in residence was Roswell M. Shurtleff.  A member of the American Water Color Society, he was also a member of the New York Zoological Society.  Shurtleff kept a small house on the edge of the Adirondacks in the Keene Valley where he spend much time painting mountain and forest scenes.

In 1902, Methodist Magazine and Review called him “our best painter of forest interiors.”  The periodical mentioned that he spent the warm months painting in his mountain home where “he lingers fondly till the winter snows drive him back to his city studio.”

By 1906 Shurtleff was represented in the Metropolitan Museum of Art, the Springfield Art Museum and in the Smith College collection.  He earned a bronze medal at the 1901 Pan-American Exposition in Buffalo, and another at the Universal Exposition in 1904 in St. Louis.  He would stay on in the 22nd Street studio at least through 1907.

Other artists in the building at the time were Grace E. McKinstry, who had studied with Raphael Collin and Benjamin Constant; and Anne Dudley Butler.  In November 1900 The New York Times remarked that “Miss Anne Dudley Butler of 44 West Twenty-second Street has the happy invention of drawing portraits in red and white crayons, instead of black and white. The effect, especially in portraits of women and children, is charming.”

But the years as an artists’ studio building would not last long. In January 1909 owner John L. Tonnelle leased “the first loft” to Frederick W. Patten.  Already Fanny Young’s Baby Shop had opened in the street level retail shop and before long the upper floors were home to embroiderers, dressmakers and corset manufacturers.

Fifty-year old William I. Gottlieb’s dressing making company, Gottlieb & Rabinowitz, was in the building in 1923 when tragedy struck.  In July Mrs. Gottlieb had gone off to the country, leaving William at home.  At around 8:00 in the morning on July 29 he drove his Cadillac sedan to the home of 20-year old Gladys Miller, an actress.  It was Gladys’ birthday.  Gladys and her sister, 18-year old Thelma (also an actress), climbed into the Cadillac with the intentions of celebrating Gladys’ birthday.

By mid afternoon Gottlieb and the Miller sisters had invited Verna Tolley and Mae Lewis to join the party.  The four young girls and the middle-aged married man headed off to Long Island, supposedly to Long Beach.  At 2:19 a.m. the five were still strong, speeding along through a pelting rainstorm.

A witness saw the Gottlieb car speeding past the dropping railroad barricades with their glowing red lanterns.  Within seconds a locomotive crashed into the Cadillac, “and for 1,200 feet the train went on, gradually grinding down to a stop,” reported The Times.  All five passengers were killed.
As the Garment District moved northward into the 30s, the lofts in the West 22nd Street building were taken by a variety of small businesses, including the Cameo Novelty Company in 1946.  Then, with the rediscovery of The Ladies’ Mile at the turn of the 21st century, No. 44 received a major renovation.

In 2007 it was converted to commodious apartments—two per floor on the lower floors and a luxurious duplex on the top two floors.  The handsome cast iron façade still garners attention on the quiet side street; offering little hint at the widely-varied history that played out inside during its more than 160 years of existence.