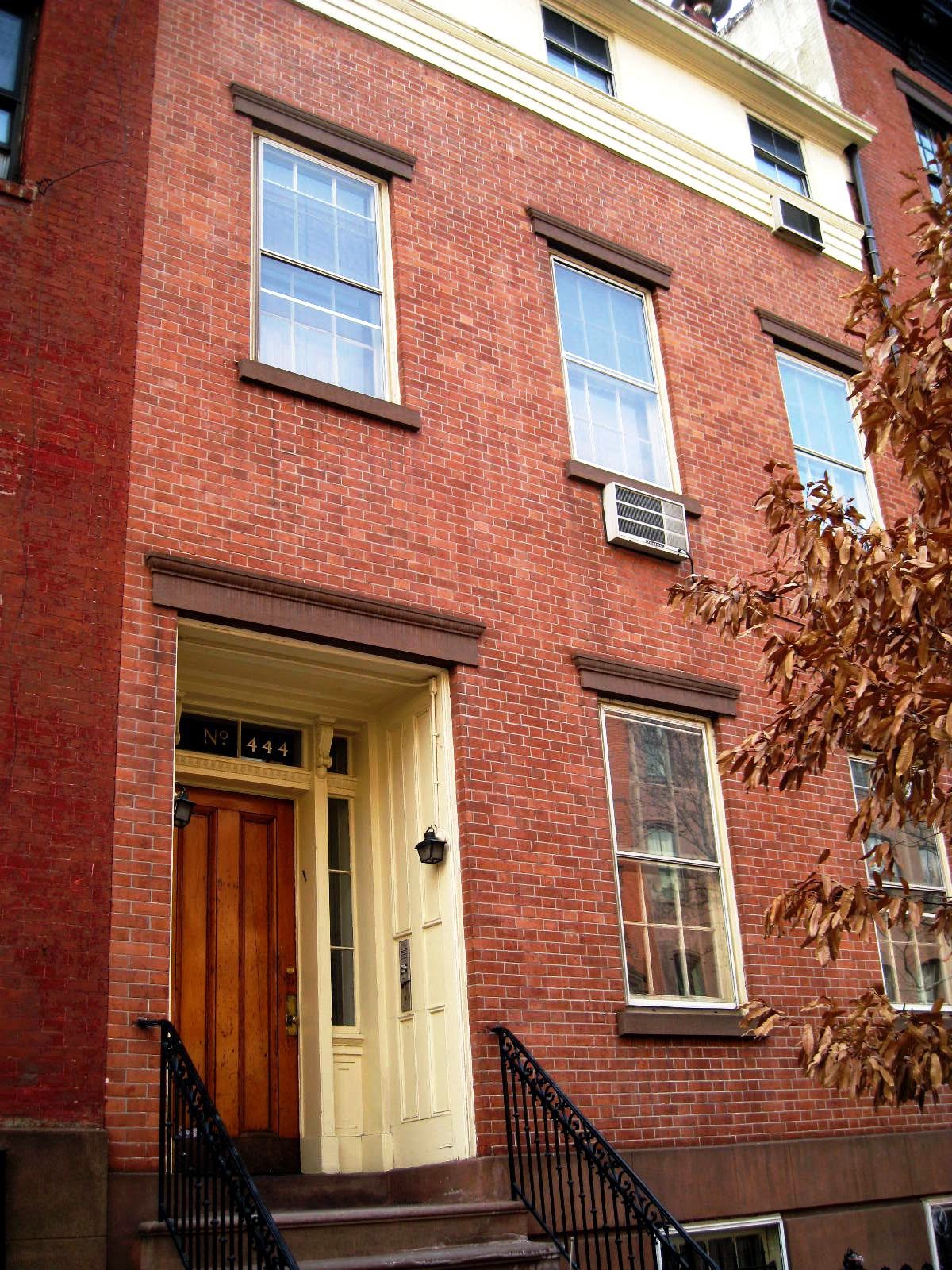 In 1811 the forward-thinking Commissioners’ Plan, which dissected rural Manhattan above Greenwich Village into streets and avenues, was made public.  On paper the country estates of the city’s wealthy were suddenly criss-crossed with thoroughfares and building plots.  Among them was Chelsea, the family “farm” of Clement Clarke Moore.

The estate extended from what is now 19th Street to 24th Street, and from Eighth Avenue to the Hudson River.  On a hill, between today’s 22nd and 23rd Streets, sat the family mansion—a three-story, hipped roof residence above an deep English basement.


As the city inched closer to Moore’s expansive property, he divided his land into building lots and in 1818 donated a large portion for the construction of the General Theological Seminary.  The manor house would survive a few more years—long enough for Clement Clarke Moore to write “The Night Before Christmas” there on December 23, 1822.


While Moore sold some lots himself, stipulating the type of residences he would allow to be built; he relied heavily on his friend James N. Wells.  A developer and builder, Wells, would nearly single-handedly transform Chelsea into what would briefly be called “Chelsea Village.”  It was possibly Wells who was responsible for the handsome Federal-style brick home built for Moore between 1835 and 1836 at No. 444 West 22nd Street between Ninth and Tenth Avenues.


Like its neighbors it was two and a half stories tall over a rusticated, brownstone basement.  The deeply recessed entranceway featured a paneled door, narrow sidelights, and overlight.  Extra touches were the delicate ironwork railings and carved brownstone lintels.


Instead of the dormers found in so many of the houses of the period, the builder choose to slope the roof toward the front and set small windows into a deep fascia board below the cornice.   The result was full-length windows in the rear and what contemporary New Englanders called “lie on your stomach” windows at the front.


By 1880 the house was home to Phillip V. Myers who bought and sold property, mostly north of the city.  On April 5, 1886 at 2:00 the parlor was the scene of the funeral of Myers’ granddaughter, Helen Oakley Rosenfeld.  She was the only child of Myers’ daughter, Amelia, and her husband Llewellyn E. Rosenfeld.


The house would become home to Dr. Brandreth Symonds and his wife, the former Florence B. Bacon.  Florence was the daughter of the former Congressman Henry Bacon.  The well-to-do doctor and his wife maintained a summer home at Goshen, New York.


The well-respected physician was also an author.  Since 1903 he had been the medical director of the Mutual Life Insurance Company; but he was best known for his books like the Manual of Chemistry and Life Insurance Examinations.  Educated at Hobart College in Ossining and the College of Physicians and Surgeons of New York City, he was a member of the University and Grolier Clubs.


Symond’s most influential work, published in 1908, was The Influence of Overweight and Underweight on Vitality.  He statistically demonstrated the relationship between weight and life span and was the first to recognize that overweight individuals were at a great risk than underweight.


The title to the house on West 22nd Street was in Florence’s name and on October 14, 1916 she leased the house for four years and eleven months, starting on November 1, to William J. Hurlbut.  The 38-year old had been living at No. 4 Perry Street in Greenwich Village.


Since 1908 Hurlbut had been writing plays and by now was well-known and successful.  Perhaps the first play that he wrote from No. 444 West 22nd Street was Saturday to Monday, which opened in May 1917.  The Washington Herald said it “should prove one of the stimulating novelties of the waning season.  This new comedy is from the pen of William J. Hurlbut, that witty and clever playwright, who has already given to the stage many noteworthy contributions.”


In signing the lease, the artsy and creative playwright agreed to make no alterations to the house.  But he apparently did not take the clause too seriously.  Hurlbut created two apartments upstairs and leased one to Albert M. Austin in 1916 and in 1918 rented to Enoch Rector and his family.  The Rectors would stay through 1921, paying $55 per month.


On April 13, 1919 The Sun wrote in detail about some of Hurlbut’s improvements.  “One of the most interesting houses belonging to the Clement C. Moore estate is now the home of William J. Hurlbut, the playwright, who was the pioneer in the little colony of artistic and literary folk who set the fashion for Chelsea as an old fashioned home centre,” said the newspaper.  It said of the house “A particular feature of which the house boasts is a typical Colonial doorway with old fashioned side and top lights.  It is such a hospitable looking door—a characteristic common to old Chelsea entrances—and the big brass knocker in the centre adds emphasis to the symbol. “


The Sun described Hurlbut’s alterations to the interior.  “The most important change in the interior arrangement of the rooms was made on the third floor, where the old partitions were torn out and an entire new floor plan introduced to accommodate two studio suites which Mr. Hurlbut rents to friends.  From an architectural standpoint the rehabilitation of the drawing room presented the most interesting problem, and the delightful manner in which it has been solved will appeal to all who have any such project in view.


“Mr. Hurlbut is an artist as well as a playwright, and he proved himself something of an architect as well, for by the exercise of his artistic taste and mechanical ingenuity he clothed the wall of the drawing room with lovely wood paneling resembling that of an old English manor house.”


Hurlbut drew  sketches of the paneling he envisioned for Florence Symond’s drawing room, then took them to a carpenter.  “The room was soon paneled from floor to ceiling in a series of geometrical designs, each piece of which was laboriously beveled by hand, then nailed into place.  The effect is entrancing,” opined Harriet Sisson Gillespie of The Sun.


The journalist noted that the 1836 detailing in the house was still intact.  “The woodwork in the dining room is simple, but in excellent taste.  Flat pilasters form an attractive decoration [on] either side of the double doors in the drawing room, and the same application is repeated on the dining room side.  The single doors are well proportioned and divided into three sets of two panels each.  Fluted pilasters ending with carved rosettes at the corners frame the openings.”


Hurlbut had filled the house with antiques, many of them heirlooms.  “Mr. Hurlbut is a collector of antiques in addition to having had many rare treasures bequeathed to him, all of which go to make his home very attractive.  He has some very old and handsome silver, which was left to him by his grandfather, William Hurlbut, for many years United States Minister to Peru…The result is that the visitor in leaving the street leaves the present behind, and the moment he enters is transported back to the days when New York was young and fashion centred in this section.”


Hurlbut’s other renovations included turning the pantry into a bathroom complete with bathtub, toilet and sink.  In the upstairs apartments he installed a sink and gas range, creating a kitchen.    Florence B. Symonds apparently did not subscribe to The Sun; for she had no idea what her tenant had done as his lease drew to a close in 1921.


The first clue came when Florence’s brokers tried to show the house to prospective buyers and Hurlbut refused to let them in.  When she finally saw the house after the lease ran out in October 1921, she did not share Harriet Sisson Gillespie's warm critique.  Although an irate Florence Symonds sold the property on May 23, 1922; she sued William Hurlbut for altering the premises and illegally subletting apartments.  The court battle would drag on until January 23, 1923.


The new buyer was the Alice Chapin, wife of Dr. Henry Dwight Chapin.  Over a decade earlier, in 1912, an abandoned infant girl was found in Central Park and taken to Dr. Chapin’s ward in the Post Graduate Hospital.  Alice Chapin took the orphan home and later found a permanent home for her.  It was the seed that would grow into the Alice Chapin Adoption Nursery in 1919, one of the city’s first private adoption agencies.


Now the house at No. 444 West 22nd Street was about to become the new Alice Chapin Nursery.  A stream of fashionable benefits were launched to aid the renovation of the house.  On December 6, 1925 The New York Times reported on a special performance of Sunny at the New Amsterdam theatre.  “The proceeds will be used for completing the new home of the nursery at 444 West Twenty-second Street,” it said.


Architect Cornelius Callaghan converted the house to include nurseries in the basement and former parlor level, and bedrooms in the top two floors.  The roof was slightly raised and the attic windows enlarged at this time. 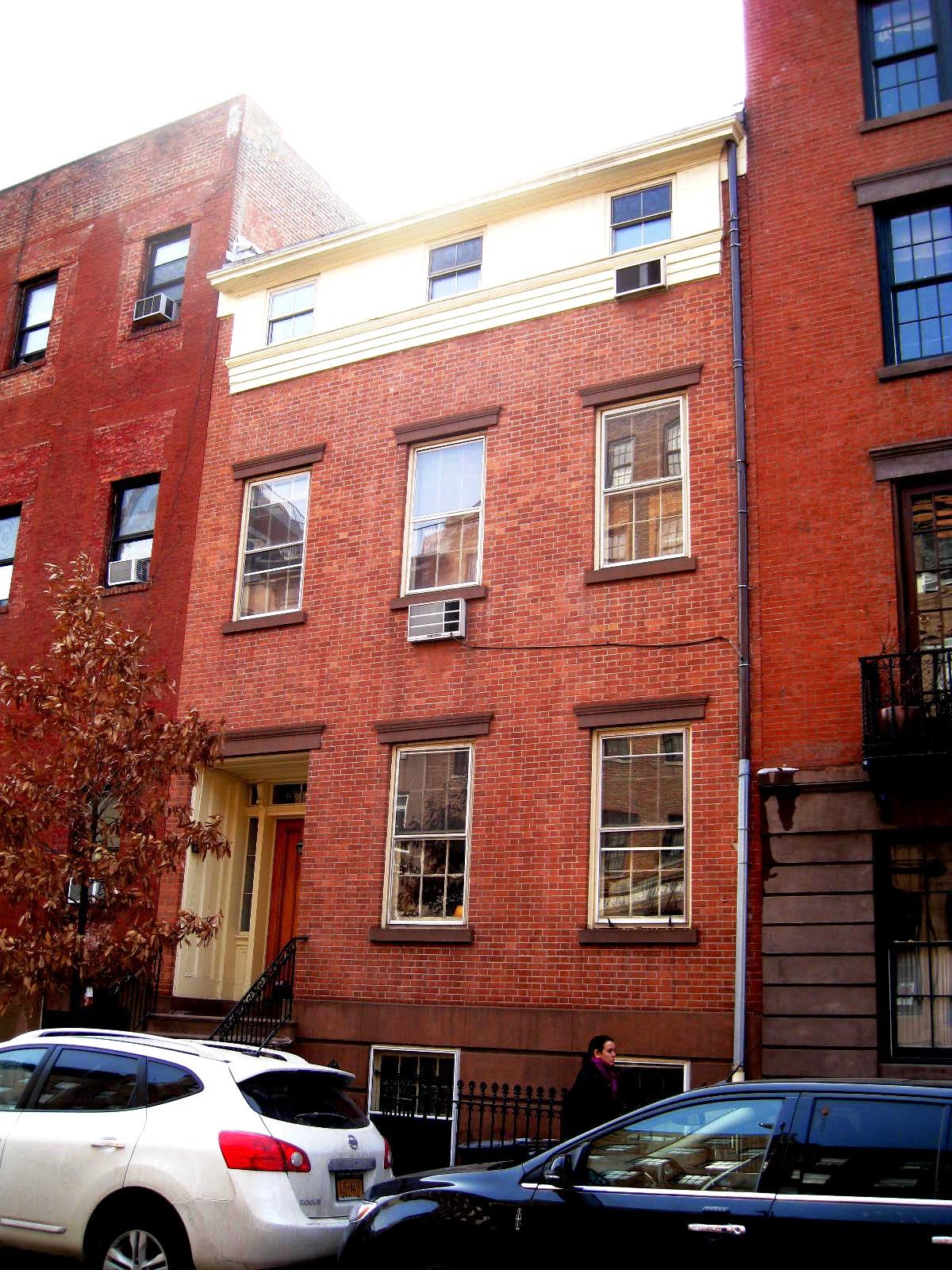 The Alice Chapin Adoption Nursery remained in the house for decades before eventually moving to No. 410 East 92nd Street.  In 1953 it was converted to three “rooms” in the basement and one apartment each on the upper floors.  In 1986 the quaint house with a long history was converted once again—this time to a basement and first floor duplex and one room apartment on each top two floors.


Clement Clarke Moore’s speculative 1836 house is little changed after 178 years.  It survives as a charming reminder of a time when Manhattan’s sprawling country estates were becoming residential neighborhoods.


photographs by the author
Posted by Tom Miller at 3:03 AM