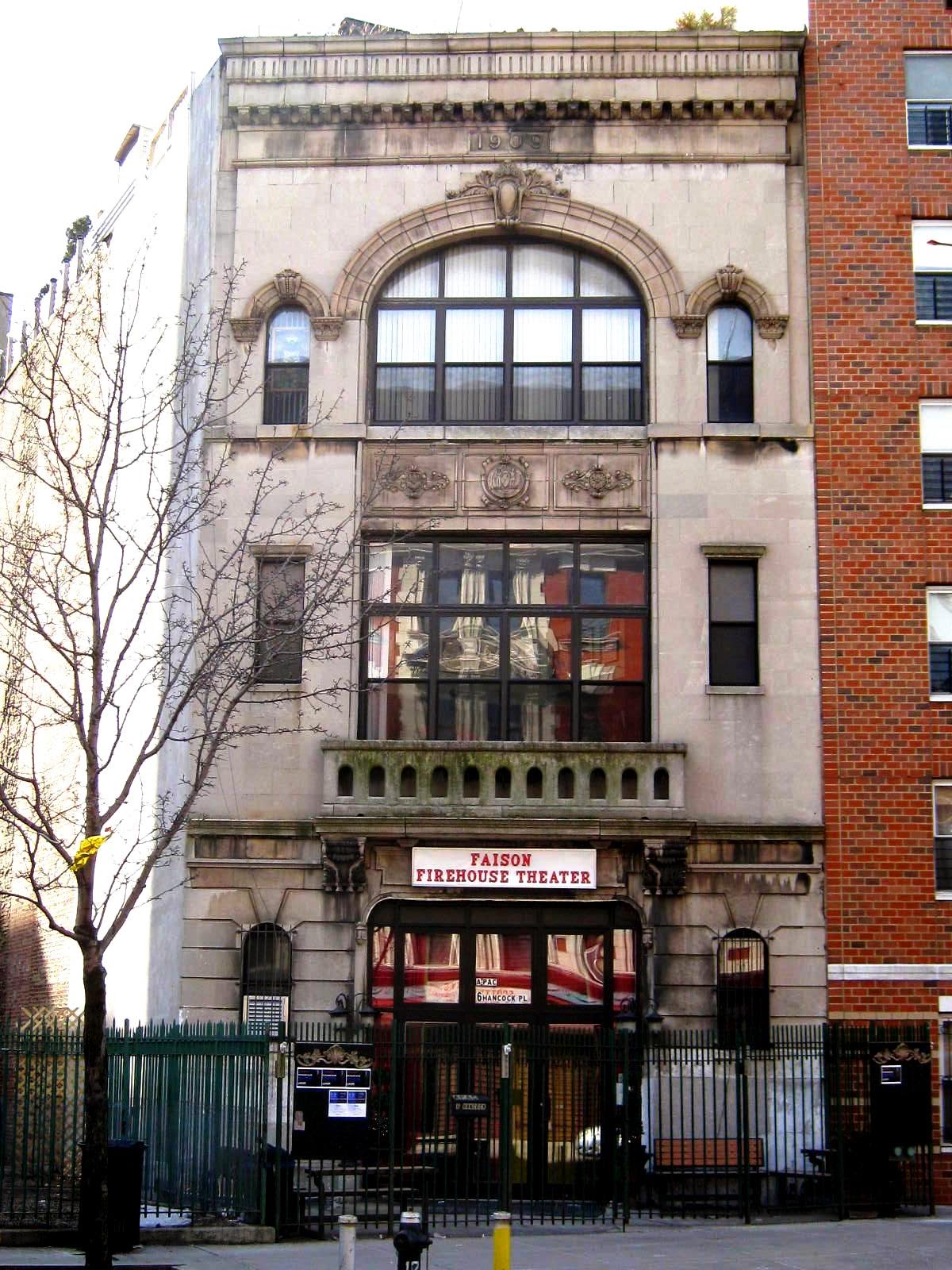 Howard E. Constable came from a proud Philadelphia family.  He could boast of ancestors like William Constable, Aide-de-Camp to General La Fayette; William Richards who fought with George Washington at Valley Forge; B. W. Richards, who had served as Philadelphia’s mayor from 1829 to 1832; and Samuel Witherill, “one of the founders of the free or fighting Quakers.”


After serving several years in the bridge and building departments of the Reading, Pennsylvania and Erie railroads, he studied architecture in Europe.  Upon his return he opened an office in New York City in 1886.  By 1902 he had become, according to Joshua Lawrence Chamberlain in his Universities and Their Sons, “one of the prominent architects and engineers of the metropolis.”


Three years after Chamberlain lavished praise on Constable, the New York City Board of Estimates considered a new firehouse for the expanding Harlem neighborhood.    The Commissioner of the Fire Department had chosen a site at No. 46 Hancock Place and on June 9, 1905 the Board approved it.


Howard Constable would eventually receive the commission to design the new station for Hook and Ladder Company 40; but then as now the wheels of New York City bureaucracy ground slowly.  Not until August 1908 were plans filed.  On Auust 23 the New-York Tribune reported that “a three story and basement fire station house is to be built for a hook and ladder company on Hancock Place, west of Manhattan avenue.”  The newspaper estimated the cost to be around $40,000 (about $975,000 in today’s dollars), and noted that the façade would be “of ornamental limestone lighted by large mullion bays.”


As 1909 drew to a close, the new firehouse was completed.  Constable had produced an imposing Beaux Arts structure equal to any downtown or in Brooklyn.  Designed during the City Beautiful Movement which proposed that monumental public buildings prompted civic pride and civilized behavior, it featured a rusticated base supporting two planar floors and a grand two-story arch.  Carved limestone panels, a decorative balcony over the bay entrance, and a ponderous stone cornice sitting on miniature brackets created a dignified home for Hook and Ladder 40. 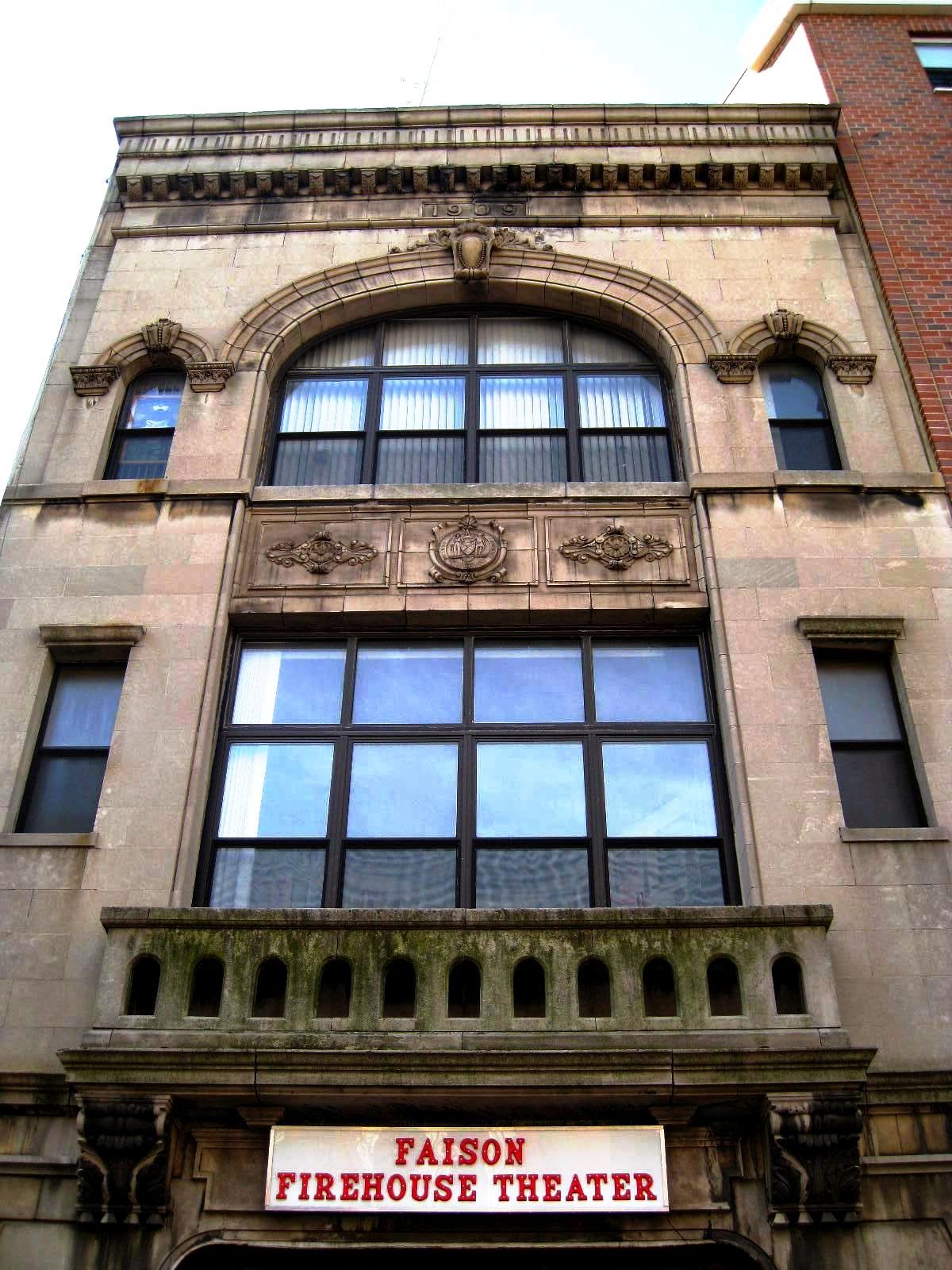 The Company moved into the building on New Year’s Day, 1910.  On street level the fire truck, horses, hay and other equipment were housed.  Above were accommodations for the fire fighters, including an office for Battalion Chief P. Callahan and one for Captain Robert Potter; and drying racks for the hoses.  But there would be little time for unpacking.


The following day The Sun reported “Hook and Ladder 40 moved into new quarters at 6 Hancock place yesterday and the first thing on the programme was an alarm of fire at 104th street and Amsterdam avenue.”  The fire was at the farthest reaches of the ladder company’s area of coverage and The Sun mentioned “This is the longest run the company has to make.”


For decades the fire house would be in the spotlight of good press—except for the messy incident in October 1911 when the Captain’s wife sued him for separation.  Elizabeth E. Potter accused her husband of “abusive language, intemperance and cruelty” and added “he got $2,000 from her at the time of their marriage by cajolery,” according to The New York Times.


The incident was soon forgotten and New Yorkers would repeatedly read of the heroic and daring deeds of Hook and Ladder No. 40’s men.  On December 9, 1911, for instance, 13-year old Mary Holmes was rescued by Lt. William Brindle Jr.  The girl was trapped on the second floor of the burning building at No. 2112 Eighth Avenue.  “The lieutenant went up the rear fire escape and fought his way through four rooms filled with fire and smoke,” reported The Evening World, “found the child and carried her to safety.” 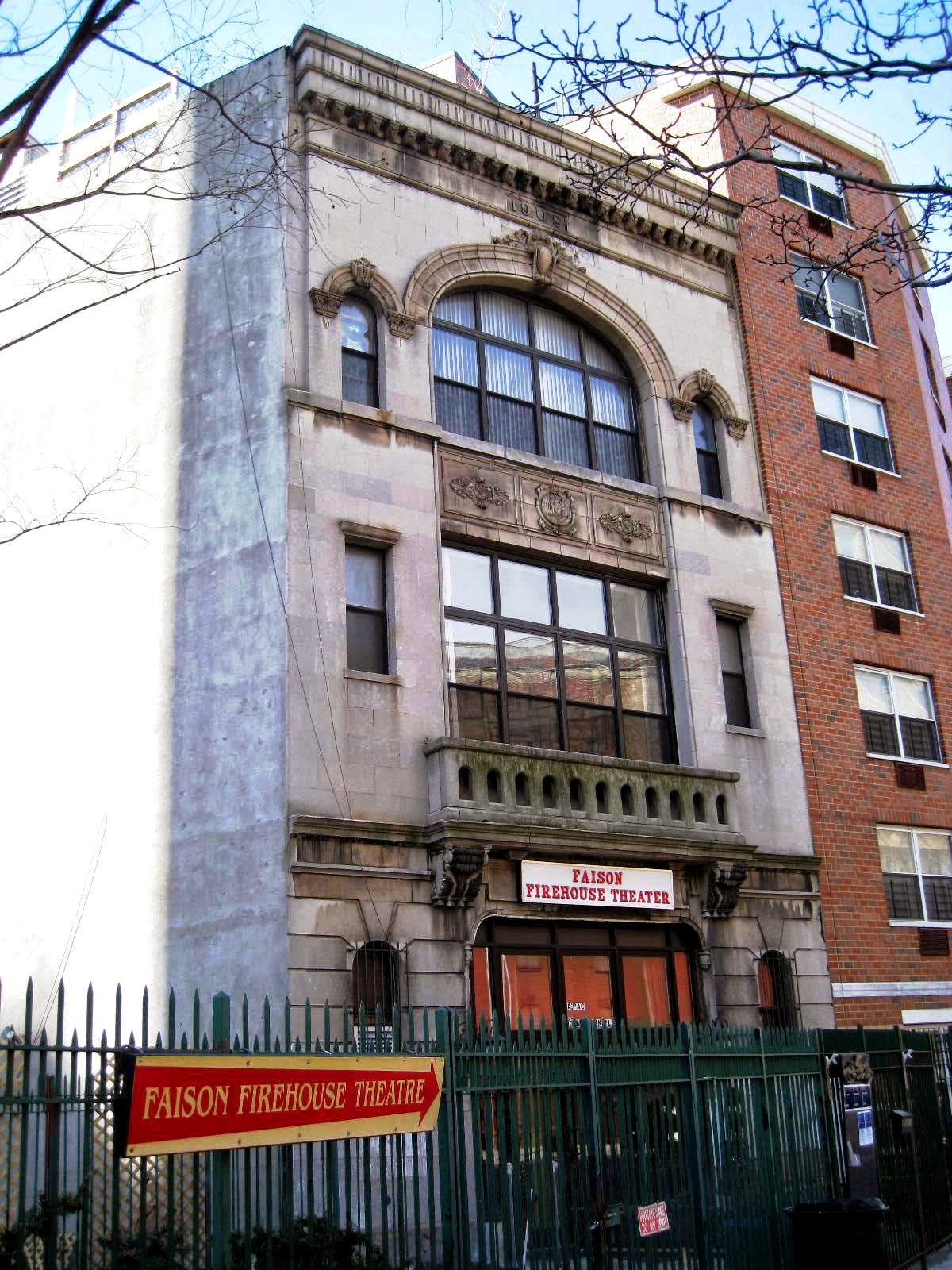 An even more astounding rescue was performed by rookie George P. Fowler on the afternoon of April 18, 1917.  With less than a year in the Department, fireman Fowler responded with Company 40 to a blaze at No. 307 West 127th Street.  One resident, Mrs. Filomena, was crouching in an open window “in an agony of panic,” according to the New-York Tribune.


Fowler started up a ladder to rescue her, but the panicked woman jumped.  “As she leaped Fowler braced himself with one arm and caught her in mid-air with the other.”  After catching the full-grown woman with a single arm, he carried her down the ladder to the ground.  The unbelievable act earned him the Hugh Bonner Medal and the department medal the following year.


As with all fire stations, the men were called for other emergencies than merely fires.  On October 18, 1918 9-year old Barbara Blanke was crossing Broadway at 120th Street when she had to jump out of the way of an oncoming car.  In doing so she ran directly into the path of a northbound streetcar.


“When David Ingman, the motorman, had slammed on his brakes and leaped to the ground he found the body wedged under the forward truck,” reported the New-York Tribune the next day.


The little girl was calm and quickly said to him “Please send for my mother at once.  I am Barbara Blanke, of 49 Claremont Avenue.  Tell her I am all right, but I want her.”


Ingman ran to a telephone and called Hook and Ladder Company 40.  Before the firemen arrived, Patrolman Tobin had crawled under the streetcar, only to find the girl tightly wedged in.


“While he attempted to loosen it the little girl talked with him calmly and offered suggestions as to how she could be soonest released,” said the Tribune.


By the time  the firemen and Officer Tobin got Barbara out, her mother had arrived.  “Barbara went home with her, refusing medical aid,” reported the newspaper.


When the men of Hook and Ladder No. 40 arrived at a tenement building fire at No. 187 St. Nicholas Avenue on October 19, 1924, they found five children hanging from he window ledges of the fourth floor.


Lieutenant Byrne shouted to the children to hold on.  Even as the aerial ladder was still being raised, Fireman Patrick Russell clambered up it.  Simultaneously a 30-foot hand ladder was raised and Fireman Wesley Williams climb that one.  Suddenly, just as Williams reached the top of his ladder, 19-year old William Thompson let go of the window ledge and fell to the aerial ladder.  He held on for a second, then began to lose his grip.


“Williams, by a daring jump from his ladder to the aerial, caught Thompson as he seemed ready to fall and carried him to safety,” reported The New York Times the following day.


The fire had started in a baby carriage on the first floor, investigators later learned.  It spread up through the stairway, mushroomed, and engulfed the top floor.  The children were forced out of the windows and were clinging there four floors above the pavement.


“Its rapid ascent through the wooden stair well cut off escape by that way,” explained Chief Martin later.


All of the remaining children dangling from the windows were rescued by the ladder company.  Despite the severe damage to the building, only seven persons were injured.  Because of the professionalism and training of the Ladder Company, there were no fatalities.


The stories of the heroism of Hook and Ladder Company 40 would make headlines for decades to come.  The following year The New York Times ran a headline that read “Rescuers Catch Infant Flung from a Fire-Escape Ladder by Father.”  But in 1966 the fire fighters would be called on for a far different act of civic duty.


The once-quiet Harlem neighborhood had vastly changed in six decades.  On November 9 at around 11:15 a.m. a would-be robber entered the coin-operated laundry of Martin Pollan at No. 41 Bennett Avenue.  The 45-year old store owner struggled with the robber and was shot in the arm.  The crook fled, pursued by the injured Pollan.


When he fled into a building next to the firehouse, the store owner shouted to the fire fighters.  They joined in the pursuit and search.   As police arrived, the combined force of firemen and officers spread out, finally nabbing the 37-year old suspect in the basement of No. 373 West 123rd Street.


By now the 1909 firehouse had outlived its functionality.  Constructed for a single horse-drawn truck, the 28-foot wide structure could not accommodate modern equipment.  When George Faison came across the building in 1999 it had been abandoned by the Fire Department.


Faison had been a member of the Alvin Ailey American Dance company and had choreographed Broadway plays like The Wiz, for which he earned a Tony Award; and Don’t Bother Me, I Can’t Cope.”  He was also awarded an Emmy for choreographing the HBO movie The Josephine Baker Story.


He purchased the old firehouse and, after considerable renovation, opened The Faison Firehouse Theater.  Faison saw the opportunity not only to promote Harlem and live theater; but to give local youths an introduction to the stage and possible job opportunities.


He told the Daily News’ writer Clem Richardson in 2011 “We’re trying to open these kids’ minds to the possibilities of working in the theater, whether they work behind the scenes, sing, dance of write.  Most of us never the the chance to play with all the things the theater offers.” 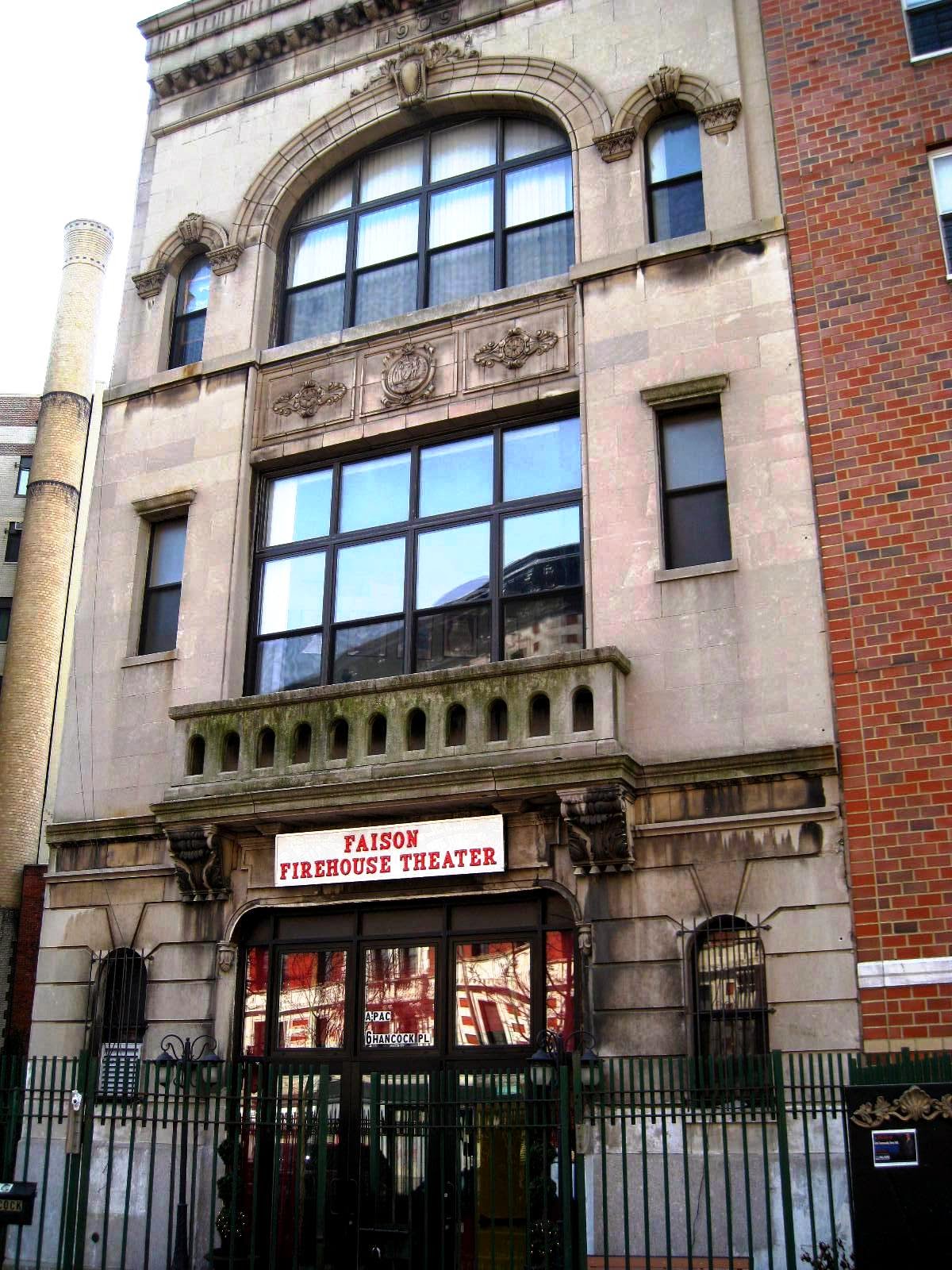 Howard E. Constable’s handsome Beaux Arts fire house survives today, if a bit grimy, because of the efforts of George Faison--an outstanding example of recycling vintage structures for the benefit of the immediate community.