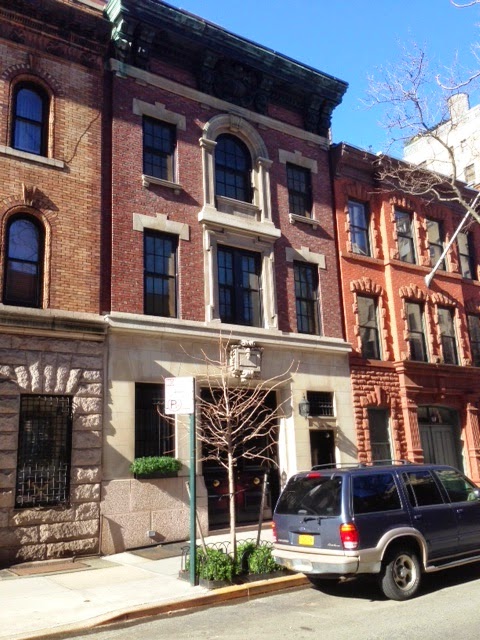 Through the 1870s and 80s Lillie M. Reynolds lived in the three-story brick house at No. 178 East 73rd Street.  To the rear was a one-story extension and beyond was the two-story brick stable.  Here for years she tutored aspiring young artists in drawing.

The neighborhood developed in the early post-Civil War years as one of comfortable middle and upper-middle class homes.  But by the end of the century the blocks nearer Central Park filled with the grand mansions of Manhattan’s wealthiest citizens.  With these families came the need for private stables to house the carriages, horses and related staff.  The block where Lillie Reynolds lived would become a “stable block” as most of the residences were demolished and replaced with carriage houses.

On March 26, 1899 the house was sold at auction.   The 25-foot wide residence where Lillie M. Reynolds taught drawing for years was demolished and replaced by a handsome private carriage house designed by architect John H. Friend.  In October 1902 broker Charles I. Hudson purchased the stable for a reported $55,000 (a stunning $1.4 million today).  In reporting the sale, the Real Estate Record & Builders’ Guide commented on November 1 “Joseph Pulitzer and James Stillman own stables on this street.”

Private carriage houses reflected the wealth and social status of their owners and this one left  no doubt.  Friend had melded two rampantly popular architectural styles—Beaux Arts and neo-Georgian—to produce an elegant home for horses and grooms.  The limestone base followed the customary stable configuration:  a centered carriage bay flanked by a doorway to the upper floors and a balancing window.

The two stories of brick and stone above featured a double-height arch which, in conjunction with the Georgian brickwork with burned headers, added an 18th century feel to the design.  At the same time the ornate cornice and cartouche, and the carved cartouche at street level reflected the fashionable Beaux Arts style. 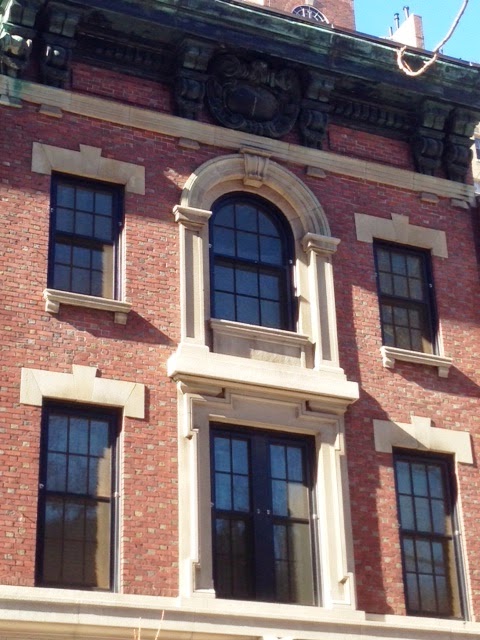 The head of the brokerage firm C. I. Hudson &* Co. at No. 66 Broadway, Charles Hudson lived at No. 1 East 76th Street, off Fifth Avenue, and maintained a country estate at East Norwich, Long Island.  He was born in New York City in 1852 and traced his lineage in America to 1600.

Hudson and his wife, the former Sara Kierstede, had four sons:  Percy Kierstede, Hans Kierstede, Charles Alan, and Hendrick.  On October 11, 1902, the same month that Hudson purchased the carriage house, the engagement of Percy to Marjorie Vaughan Lea of Philadelphia was announced.  It was possibly a welcomed distraction from the less-than-flattering press the family received two years earlier.

As penalty for his ungentlemanly behavior, the Governing Committee of the Stock Exchange suspended Hudson for thirty days, the maximum penalty possible.

The indecorous skirmish was, by now, mostly forgotten and the Hudson family went on with their glittering social lives among the Fifth Avenue elite.  With a mansion full of males there would be no debutante receptions, dinners and dances; but one may assume that the handsome carriages maintained at No. 178 East 73rd Street carried the Hudsons to the Metropolitan Opera, the fashionable hotels for dinners and balls, and to the mansions of New York’s other millionaires.

Although Charles and Sara Hudson had no debutante entertainments to host; the year 1910 began a flurry of social events surrounding the engagements and weddings of their remaining three sons.  On May 19 that year Hendrick was married to Helen Morgan Frith.  Five months later on October 14 the engagement of Hans to Ethel Le Roy De Koven was announced; and on December 30, 1911 the plans for a February 7, 1912 wedding of Charles Alan Hudson to Eleanor Granville Brown were completed.

By 1921 the health of the 69-year old broker was failing.  On June 14 Hudson sold the carriage house, now termed a “three-story garage” to George W. Jackel.  In August he went to Atlantic City “in search of health,” according to The New York Times.  It was there on November 15 that he died, leaving an estate of approximately $1.4 million.

The old carriage house was next purchased on December 1, 1937 by real estate operator Joseph L. Ennis.  George T. Bowdoin, at the time, was searching for a private garage further uptown.  He owned the two-story carriage house at No. 159 East 35th Street which had been in his family since 1907 and the two men struck a deal.

On December 21, less than three weeks after purchasing the former Hudson stable, Ennis sold it to Bowdoin.  The New York Times reported “The structure carries an assessment of $44,500, and was sold for cash.”  The following day the same newspaper wrote “Joseph L. Ennis & Co., operator, has purchased for cash from George T. Bowdoin the two-story private garage at 159 East thirty-fifth Street, assessed at $36,500.”

The Bowdoin family was well known for their philanthropic work.  They maintained a country estate north of the city described by The New York Times in 1929 as a “vast tract of land with three-fourths of a mile waterfront on the Hudson.”

The Bowdoins would retain the 73rd Street building for decades.  In 1964 an art gallery, PVI Gallery, was installed here.  On February 29 that year The Times said somewhat unkindly that the “Gallery PVI at 173 East 73d Street, looks like it could be a lively place, although the art there at the moment is more promising that fulfilling.”

Gallery PVI would make way for Bowdoin Antiques at street level while some Bowdoin family members lived above.  The Bowdoins sold the building in 1997.  It was converted to a single family house owned for a while by attorney Valerie Mnuchin Rozen.  She sold it in 2010 for $13 million.

Once a home for horses, the 6,500-square foot space now has six bedrooms, seven baths, a library designed by Stephen Wang, an elevator, home gym and walk-in wine vault.  Yet from the street, little has changed to the upscale stable since the first carriage was driven into it in 1902.
Posted by Tom Miller at 1:51 AM