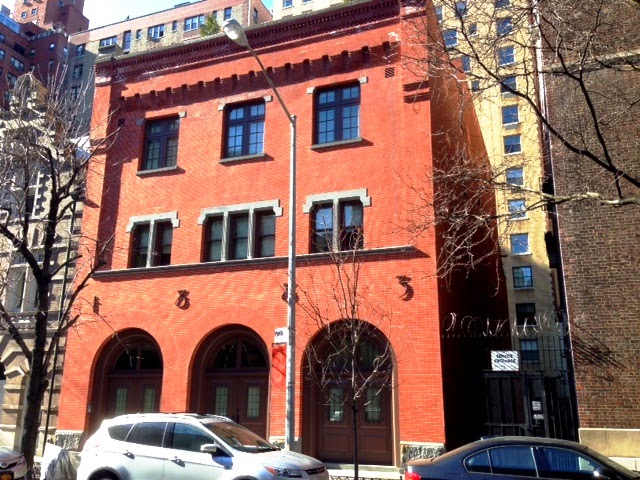 As millionaire Henry G. Marquand’s immense mansion at the corner of Madison Avenue and 68th Street was still under construction in 1883, ground was broken for his private carriage house five blocks away at No. 166 East 73rd Street.  Architect Richard Morris Hunt, a close friend of Marquand, was responsible for both projects, which were completed almost simultaneously in 1884.

Marquand’s stable was one of the first on the block between Lexington and Third Avenues; but would by no means be the last.  For the next two decades wealthy New Yorkers would erect their carriage houses along the block; giving it the distinction of a “stable block.”  Unlike the Marquand mansion, Hunt did not lavish the utilitarian building with dormers, projecting lentils and exuberant ornamentation.  Instead he produced a decidedly stern and masculine structure of brick and stone that was more fortress than palace for Marquand’s vehicles, grooms and horses.

Hunt’s design for the street level varied from the cookie-cutter configuration of a large centered carriage bay flanked by a doorway to the upper floors and an equal-sized window or door.  Instead his three openings were equally-sized arched maws within the flat-faced brick base.  Above these openings Hunt documented the year construction commenced, 1-8-8-3, in cast iron numbers; choosing a trendy 1880s font. 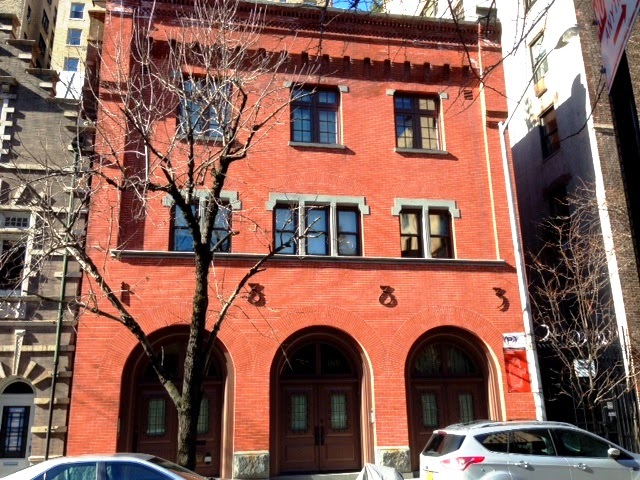 The completed stable cost Marquand $25,000—more than half a million dollars in today’s money.  It was a drop in the millionaire’s pecuniary bucket when one considers that his Madison Avenue mansion cost 40 times that much.  The street level housed three vehicles and the team of horses—there were stalls for a dozen of them—and in the yard behind was a sizable manure pit.  The odor that arose from the pit alone helps explain why the carriage houses of the wealthy were constructed several blocks away from the mansions of their owners.

As was expected in 19th century stables, the hayloft was on the second floor.  The remainder of the upper floors was given over to housing for groomsmen, coachmen, related staff and their families.

When Henry G. Marquand died on February 26, 1902 publisher Joseph Pulitzer’s lavish mansion was being constructed three blocks to the west, at No. 11 East 73rd Street.  Nearly blind and neurotically sensitive to noise, Pulitzer’s relentless demands strained the relationship between him and his architect, Stanford White.

The Marquand carriage house was perfectly located to Pulitzer’s new mansion.  By the time the Italian palazzo was completed in 1903, Pulitzer had purchased the stable.  The building would remain in Pulitzer hands until shortly after the publisher’s death on October 29, 1911.  On November 22, 1912 the New-York Tribune reported on the estate, which had been appraised at a net value of $16.8 million.  The stable, the newspaper said, was appraised as $68,000.

The Marquand-Pulitzer carriage house would suffer a less glamorous status when it was soon purchased by William F. Daly.  Daly’s family lived upstairs and he operated a livery stable and garage on the first floor.
In 1915 Daly struck on an inventive money-making scheme.  The age of the horse was quickly giving way to the automobile and motorized truck.  That year the Ward Motor Vehicle Company produced the Ward Special, a truck with an electric-motor.  The problem was, according to The Edison Monthly, “How to take care of these vehicles, or in other words, how to garage them, seemed to be a problem not so easy of solution.”

Daly provided the answer.  Ward Motor announced “We are therefore able to say to the man who operates one horse and wagon that our Ward Special can be stored, washed and charged for twenty dollars a month, against his present stable charge of thirty dollars, all for equal service.”  For truckers who wanted only garaging, Daly offered a “ten-dollar rate for housing electrics.”

The upper rooms were the somber scene of the funeral of Daly’s son in February 1918.  William F. Daly, Jr. died on February 6 at the age of only 29.

At the time the MacDowell Club was operating from a roomy building at No. 108 West 55th Street.  Founded in 1905, the women’s club supported the artists’ retreat, MacDowell Colony, in Peterborough, New Hampshire.  Named for composer and concert pianist Edward MacDowell, the organization was part of a nationwide movement to promote music and art in the United States.  Among the founding members were Augustus St. Gaudens, Daniel Chester French, Charles McKim, and Sarah Bernhardt.

In 1924 the Club purchased Daly’s Garage and converted it to club rooms, an auditorium and lecture areas.  Recitals, concerts and readings were presented here—pianist Sidney Foster debuted here on February 10, 1939 after winning the annual MacDowell Competition; and Martha Graham’s dancers performed here in 1929.  Other notables less related to the arts also appeared here.  In October 1937 Karl Jung gave a five-part seminar on “Dream Symbols of the Individuation Process.”

It would seem that it was the MacDowell Club that slathered the building’s façade with a stucco substance in the 1930s.  In order to ensure that the stucco adhered, the red brick was distressed prior to the application.  Thankfully, the Club retained the wonderful cast iron numerals over the doorways.

In 1943 the Central Gospel Chapel of New York purchased the building.  Department of Buildings records indicate its conversion to a “religious assembly” was completed in 1946.  The group left the building around 1980 and until 1990 it was being used for commercial storage.  By now Henry Marquand’s once-proud carriage house was in disrepair and presented an eye-sore to the neighborhood.  The building had been designated a landmark in 1981; however landmark designation carries no onus of maintenance for the owner.

But in 1990 Steve and Linda Horn owned the building and had hopes of restoring the façade to its original appearance.  In 1990 they approached the Landmarks Preservation Commission with a proposal; but the sticky question of the scored brick raised its head.  The Commission feared that if the material were removed, the unsightly brick would be more objectionable than the stucco.  Its suggestion was to remove the peeling paint, repair the stucco and repaint it.

Seven years later the building passed into the hands of Robert and Ellen Kapito who envisioned it as a single family home.  Their ambitious project included restoring the façade, as the Horns had wanted.  The couple commissioned restoration architect Herbert Rose to convert the 123-year old structure.  The project included not only a gut renovation, but the careful removing of what the firm called “a heavy cement coating” and sanding the bricks back to their original flat surface.

The conversion was completed in 2013.  Today, behind the restored façade of Richard Morris Hunt’s remarkable carriage house is an equally remarkable modern mansion.

non-credited photographs taken by the author
Posted by Tom Miller at 5:11 AM