As the 19th century drew to a close Harlem had developed from a rural area of small farms to a suburb of New York City whose streets and avenues were lined with homes, churches and businesses.  The extension of the elevated railroad in 1880 made the area accessible and developers responded to its potential with blocks of brick and stone speculative rowhouses.

In 1899 architect Henri Fouchaux designed ten harmonious limestone houses on Convent Avenue in the Morningside Heights section for speculators Hyman and Henry Sonn.  The pair originally had approached F. C. Zobel to design the row.  Zobel’s plans called for wider homes (resulting in eight rather than ten).  The projected cost of construction was $15,000 each—about $407,000 today.  That price was perhaps a bit too rich for the Sonns’ taste and they called in Fouchaux.

His proposed row, filling the block from 141st to 142nd Street, would be high-end residences as well; yet would cost nearly half as much at $8,000 apiece.  Fouchaux designed them as a mirror-image set.  The five homes from the 141st Street corner to the middle were each different but complimentary.  Then the pattern reversed itself—the sixth residence matched the fifth next door, the seventh matched the fourth, and so on until the two corner homes served as the show-stopping bookends.

The row was officially completed on January 31, 1902.  The two end homes turned their backs to the row, opening on to the streets while retaining the Convent Avenue addresses.  No. 280, at the southern end of the string, pretended to be nothing less than a mansion.  It sat imperiously back from the sidewalk, surrounded by an areaway protected by a stone and metal fence.  The façade featured the scrolls and carvings expected in a Beaux Arts structure; yet Fouchaux handled the ornamentation with reserved dignity. 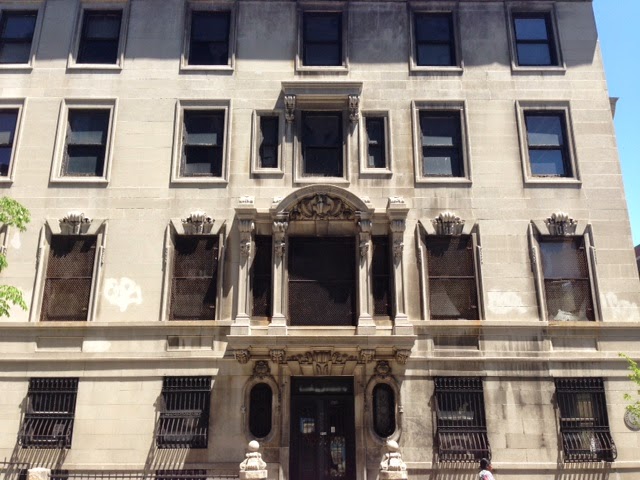 It appears that No. 280 was first owned by James J. Phelan.  In 1901 he applied for a reduced assessment because of the “paving with asphalt pavement” of Convent Avenue that ended at 141st Street.

In 1906 the City College of New York had completed its striking Collegiate Gothic campus directly to the south of No. 280 Convent Avenue.  A year later, on August 25, 1907 the Phelans were apparently packing up and considering selling the mansion.  An advertisement in the New-York Tribune that day sought a caretaker “by married couple, one child; care of private house for sale or during family’s absence; experience; with first class city reference from present employer.”  Applicants were instructed to contact Mrs. Phelan at the service address, No. 451 West 141st st.

The house was purchased by the City for $39,000 “For the use of the College of the City of New York as an addition thereto.”  By 1911 it was home to Herbert R. Moody and his wife, the former Edna Wadsworth.  Moody was Professor of Chemistry at the college and had been director of chemistry laboratories since 1905.  Dr. Moody would later serve as chief of the technical branch of the chemical division of the War Industries Board during World War I.

But before that came to pass, the College spent $4,500 to renovate the house in 1915 as the official residence of President Sidney Edward Mezes, appointed the year before.  Three years later the Board of Estimate and Apportionment approved a budget of $2,600 for painting buildings at the college, including the President’s house.

Like Dr. Moody, Sidney Mezes would be called upon with the United States’ entry into the war.  In 1917 he was appointed a member of “the Inquiry,” a committee set up by President Woodrow Wilson to prepare peace negations following the expected victory.  (It was probably no coincidence that the group’s director was Presidential adviser Edward House, the brother-in-law of Mezes’s wife, Annie Olive Hunter.)

In June 1921 Mezes reached the top of his salary, $12,500 per year, as allowed by the City Charter.  City Comptroller Craig decided that the President’s rent-free status equated to a higher salary than he was permitted.  His solution was that Mezes should pay $6,000 a year rent going forward and reimburse the city $9,000.  “The Comptroller described the house, which is a four-story and basement dwelling, as a mansion,” reported The Evening World on December 29, 1922, “and says he is advised that $6,000 a year is fair rental.”

“In a description of the residence, the Comptroller calls attention to two wine cellars…The house contains a large billiard room trimmed with quartered oak, a large parlor trimmed with white mahogany, a foyer and dining room trimmed with quartered oak, a smoking room fitted with red mahogany paneling.  A floor above the parlor is finished in white and birdseye maple.  The third floor contains five rooms, three of which are for servants.”

Whether Mezes ever, indeed, was forced to pay rent is unclear.  Following his departure in 1927 No. 280 Convent Avenue became home to Frederick Robinson, the last of the City College Presidents to live here.  Robinson’s presidency lasted from 1927 through 1938, after which the mansion’s glory days came to an end.

For a while the house was used as a “student boarding house,” then became the headquarters of the Alumni Association around 1945.  Named The Alumni House, it suffered use as offices and sleeping rooms for more than a decade.  As the Alumni Association prepared to move to the fifth floor of the Finley Student Center in 1957, an historic treasure was uncovered in the attic. 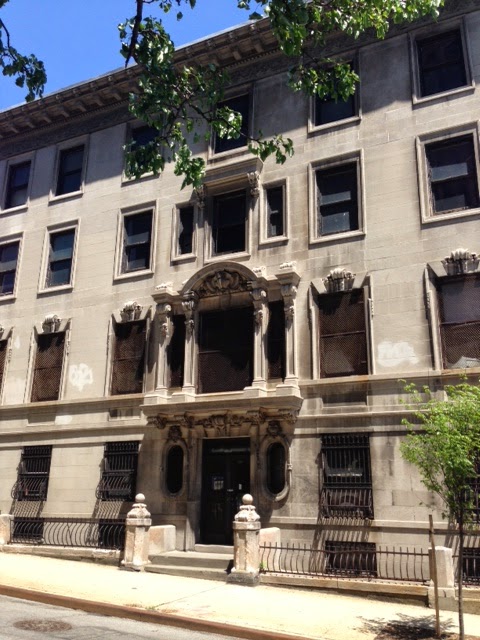 Townsend Harris had founded City College in 1847 and is credited as the diplomat who opened the Japanese Empire to foreign trade and culture.  In December 1857 he marched 100 miles from the port village of Shimoda to Yedo (now Tokyo) to negotiate the first trade and amity treaty between the United States and the Japanese Empire.  A flag bearer headed the procession carrying a 31-star American flag made of Japanese crepe.

Following the signing of the treaty Harris wrote “The American flag was carried before me for more than 100 miles through this country.  I displayed it in the streets of this great city, and it daily waves before my residence, so that we can say that the first foreign flag ever hoisted in this city was the Stars and Stripes.”

Townsend Harris brought the flag back with him to the United States in 1862 when he retired as consul general.  It was eventually framed and hung in the Townsend Harris Hall High School, the preparatory school of City College.  When the school was closed in 1942 the flag disappeared and was assumed lost.

Then, on September 21, 1958, The New York Times reported “The first foreign flag raised in the city of Tokyo after the opening of Japan has been found in the attic of an old brownstone building at 280 Convent Avenue, just north of the City College campus.”  As the Alumni Association emptied the attic, the framed flag was found hidden behind some dusty cabinets.

The once-grand mansion now became something of a white elephant for City College.  For a period it was used by the Hamilton Grange Conservation Office, and in 1968 became an incidental part of the anti-Vietnam protests.

When potential employers arrived on campus in November that year, students whom The New York Times deemed “radical” were offended by the presence of representatives of General Dynamics, Hughes Aircraft, and other firms manufacturing war-related products.  The protesters disrupted the scheduled interviews at the School of Engineering, resulting in about 600 engineering students pushing back.

The engineering students marched to the Administration Building carrying signs reading “We Want Action.”  The Times revealed its own political stance in reporting that they “denounced the radical students and threatened to march on the South Campus, several blocks away, which is the setting of most of the college’s hippie, yippie and antiwar activities.”

Although the engineering students were unhappy with compromise (“Why the hell should we give them this concession,” shouted one student), the administration moved the interviews to No. 280 Convent Avenue, off campus, “until the situation cools.”

The mansion sat empty and neglected for the next four decades, suffering from fire and water damage.  Then in 2013 City College announced plans to build a sleek three story addition as part of a conversion to the Colin Powell School for Civic and Global Leadership.  Neighbors and preservationists were enraged.  The Historic Districts Council called the proposed addition “out of character” with the district.  Much to the community’s dismay, the Landmarks Preservation Commission approved the ultra modern glass and metal addition.

The battered mansion sits waiting.  In the meantime, preservationist Yuien Chin of the Hamilton Heights-West Harlem Community Preservation Organization complained to journalist Jeff Mays of DNAinfo New York “The process was circumvented.  The project was approved.” 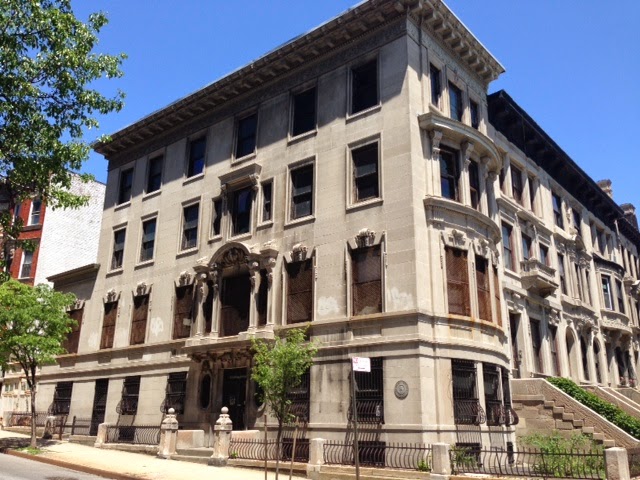