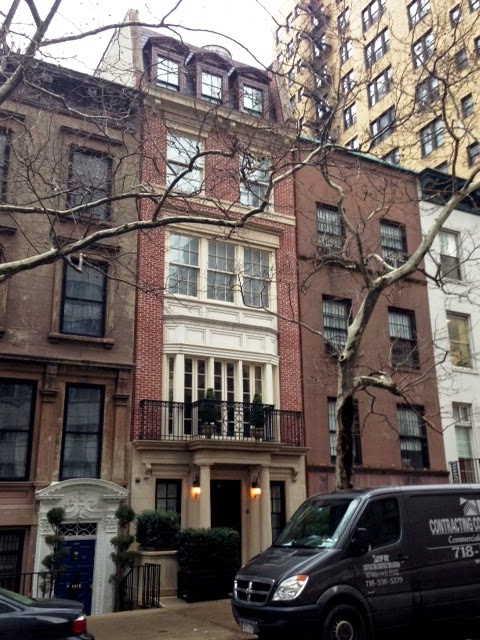 As the turn of the last century approached, the block of East 68th Street between Second and Third Avenues was lined with brownstone-clad homes built on speculation by John D. Crimmins.  The three or four story dwellings were little different from hundreds of others in the neighborhood.  Among the respectable families on the block was that of Isaac H. Rothschild who lived at No. 226.

The night of April 19, 1898 was a special one in the Rothschild house.  Daughter Blanche was married to Herman Meyers there that evening.  Newspapers related that Rev. Dr. Kaufmann Kohler of the fashionable Temple Beth-El officiated and that several of the groom’s relatives had traveled from St. Louis for the ceremony.  “The bride wore white satin,” said The New York Times the following day.  “A wedding supper followed the ceremony.”

Also living in the house was the bride's 81-year old George Newburger; Hannah Rochschild’s father. The elderly man's only son, Abraham Newburger, was the manager of the Armour & Co.’s East 35th Street branch and his nephew, Abraham H. Hummel was a respected lawyer.

Hummel passed down his old silk hats to his uncle, prompting The New York Press to comment “He was proud of the fact that his nephew’s big hats fitted him, and he was kept well supplied with them.”  Oddly enough it would be one of the used silk hats that would bring about the old man’s death.

Within a year of Blanche Rothschild’s wedding, Abraham Newburger was married.  The newlyweds were away on their honeymoon on Sunday March 12, 1899 when George Newburger boarded an uptown-bound streetcar on Third Avenue.  Looking smart in one of his old silk hats, he had just celebrated his 82nd birthday.

Just as Newburger and a few other passengers disembarked the streetcar at the intersection of Third Avenue and 125th Street, Hook and Ladder Truck No. 14 was speeding across 125th Street headed to a fire.  “Driver J. Sheridan noticed that passengers were alighting from a Third avenue car at the crossing,” reported The New York Press.  “He yelled to them to get out of the way.  Foreman Eugene T. Terpenny rang his gong vigorously.”

Everyone made it to safety, including George Newburger.  But in the rush to the curb his hat fell to the ground and was rolling in the street in front of the galloping horses.  Before anyone could stop him, Newburger rushed to recover his hat.  One of the horses struck the old man, knocking him to the ground, and the wheels of the fire truck passed over him.  Newburger suffered internal injuries and bone fractures.  He was carried into a cigar store where he died within a few minutes.  His nephew’s monogram was inside his hat and in his pocket was a matchbox engraved “GN” on one side and “Uncle George from Abe” on the other.

In the first years of the 20th century architect Electus D. Litchfield was making a name for himself.  By 1915 he had designed the United States Court House and Post Office building, still under construction, in Denver; and the large Public Library in St. Paul.  Before 1920 he would purchase a number of the brownstone homes on the East 68th Street block.  It was a time when outdated Victorian dwellings throughout the city were being remodeled as modern, fashionable homes.  Litchfield intended to transform them to the currently-popular neo-Georgian and Federal styles.

On February 20, 1920 the New York Herald explained the project.  “Plans are under way to form the nucleus of a new society neighborhood in the south side of Sixty-eighth street between Second and Third Avenues.  Electus D. Litchfield, architect, purchased twelve old fashioned houses opposite the Schermerhorn properties in the north side of the street and will alter them into the modern American basement type in accordance with the tastes and wishes of buyers.”

It was just the sort of thing that was going on in Sutton Place—a formerly dingy area now being transformed, greatly by architect Mott Schmidt, into neo-Georgian mansions for wealthy socialites.  The Sun deemed the 68th Street concept an “interesting development” and reported that “A number of sales have already been made.”  The New-York Tribune, on February 26, said “Folks who live in the best Park Avenue apartment houses have displayed much interest in the houses.”

On February 26, 1920 he sold two of the remodeled houses.  No. 242 was purchased by Mrs. Winston Hagen.  The Sun called it “a newly remodeled American basement dwelling.”  The house next door, “a similar building,” went to Francis Danforth.

Interestingly, Litchfield held on to one of the houses as-is.  Rather than remodel No. 226, he and his wife (the title was in her name) leased it to the Hahnemann Hospital “for use as a home for nurses.” 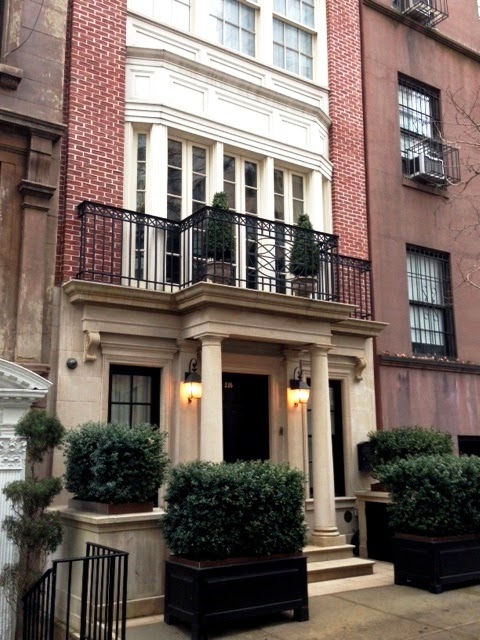 But in 2009 his cause was taken up again--most likely unknowingly--when No. 226 was demolished and construction began on a five-story neo-Georgian mansion.  The red brick and stone private home is nearly indistinguishable from Litchfied's revival townhouses designed 80 years earlier. 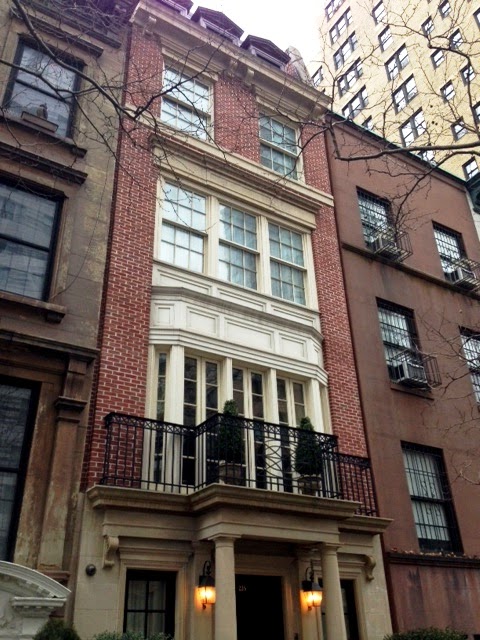 photos taken by the author
Posted by Tom Miller at 2:53 AM