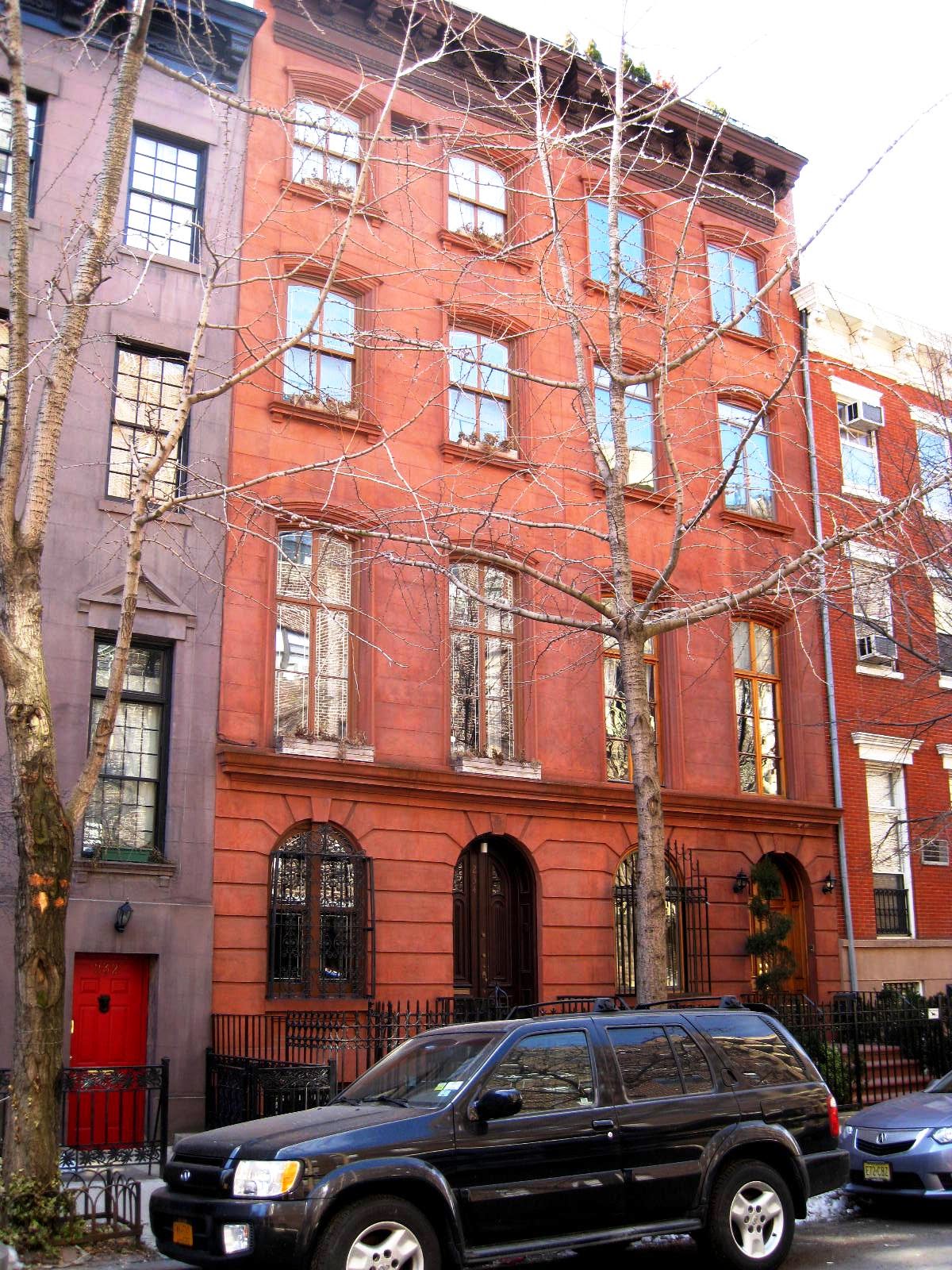 By the outbreak of the Civil War the block of West 22nd Street between Seventh and Eighth Avenues was fully developed.   The area north of 14th Street which had been pastoral farmland half a century earlier, was now the bustling community that took its name from the Clement Clarke Moore estate, Chelsea.


Nearly all the wide, upscale homes on the block were in the Greek Revival style, wildly popular for New York rowhouses from the mid 1830s through the 1850s.  Their tall brownstone stoops formed a regimented pattern along sidewalk.   The ubiquitous presence of the near-clones made two houses stand out—Nos. 234 and 236 West 22nd Street.


The architect stepped out of the Greek Revival box and presented two upscale residences in the new Anglo-Italianate style.  Faced in brownstone, they dismissed the high stoops of their neighbors in favor of shallow, three-step porches.  Although they sat no further back from the property line than the rest of the houses, the absence of the necessarily-deep stoops provided extra large garden areas.  A substantial cornice separated the rusticated base with arched openings from the upper three stories.  Here the stone-framed windows of each successive grew gradually shorter.


Following the death of James H. Leverich of Louisiana, his widow and her two sons, along with James’s two brothers, Henry and Charles, moved to New York.  With the war raging, Mrs. Leverich moved north and into the new house at No. 234.


At least one of James’s brothers, W. E. Leverich, remained in the South and in 1861 was in need of funds.  He applied to the Mechanics and Traders’ Bank to transfer 30 shares of capital stock from Henry’s account in New York.  It was an idea that raised the ire of the Confederate bankers and Attorney General.


On Friday June 21, 1861 the New Orleans Picayune reported “The President of the Bank entertaining serious doubts as to the propriety and legality of such a transfer, addressed a communication to the Attorney-General of the State, soliciting his opinion in the premises.  The answer of this officer is conclusive as to the illegality of the proceeding…No intercourse, other than a hostile one, can be tolerated between the people of the two sections.”


The Attorney-General Thomas J. Semmes said, in part, that there was no such thing as “war for arms and a peace for commerce.  Mr. H. S. Leverich being domiciled in New York is to be regarded as an alien enemy, and no person domiciled within the Confederates States can hold any intercourse or communication with him during the war.”  It was seemingly the last attempt of the Leverich brothers to exchange funds.


On Wednesday, March 23, 1864 the Mrs. Leverich's eldest son, Jasper Strong Leverich, died in the house on West 22nd Street at the age of 28.  At 9:00 on Friday morning the 25th his funeral was held in his mother’s parlor.  Jasper’s brother, James H. Leverich, then only 6 or 7 years old, would grow into a successful businessman and a member of the Stock Exchange.


In the meantime, next door at No. 236 lived the family of Dr. Benjamin Wolfsohn, deemed by The New York Times to be “a respectable physician of this city.”  Born in Germany, Dr. Wolfsohn lived in the house with his grown son, Edward, an accomplished pianist.


On Friday evening, September 22, 1865 the 69-year old physician left the house to attend a meeting of the Harmonie Club at No. 141 8th Street.  Five days later The New York Times reported that “He tarried there until after 10 o’clock, and then, taking cheerful leave of his companions, departed, as everyone supposed, for his dwelling.”


The Times explained “Dr. Wolfsohn having been a man of regular and abstentious habits and well-balanced mind, and never having been away from home at night without making whereabouts know, his family naturally feared that he might have fallen a victim of the Sixteenth Ward banditti while on his way home from the club.”


On Monday the Harmonie Club offered a $600 reward for information as to the whereabouts of Dr. Wolfson—an attractive $8,000 today.  Unfortunately, it was already too late.  Two boys rowing a boat in the Hudson River that morning off 23rd Street discovered a floating body.  They secured it with ropes to keep it from floating away and notified police.


The New York Times reported that “when the corpse was taken from the river it was found to be that of Dr. Wolfsohn.  The doctor’s gold watch, wallet, (containing a considerable amount of money), his gold spectacles, and other valuables being on his person, of course all idea of foul play was banished from the minds of the spectators and police.”


The family was not so sure.  The newspaper noted “but the relatives, unable to take a cool view of the subject, insisted that he had been foully murdered, although they could see no early reason for the commission of the deed.”


At the family’s insistence, a “searching inquest” was initiated.  Witnesses were interviewed and a week-long investigation was conducted.  The conclusion was that “it seems probably that the Doctor, when he left the stage which he took at the club-room door, busily engaged with his own thoughts, walked in the wrong direction and into the river.  This theory is supported by the testimony of the watchmen on two vessels which were moored near the Twenty-third-street-pier, who say that at about 11 o’clock on Friday night they heard a splash and a shout for aid.”


The first instance of real scandal at No. 234 West 22nd Street occurred in September 1881.  The widowed Rosetta Van Loan lived here with her young daughter, Hattie.  On September 9 Frank Hawley, who worked as a clerk at No. 391 Broadway, was arrested by a Deputy Sheriff on charges filed by Mrs. Van Loan.  According to her suit, he had seduced her daughter and she demanded $10,000 in damages.


It would not be the last instance of an unfavorable spotlight being focused on the house.


By 1896 No. 234 was apparely being operated as a boarding house—as were many of the once-refined homes on the block.  George McQuillan lived here and ran a saloon nearby at No. 216 Seventh Avenue between 22nd and 23rd Streets.  The Irishman’s brother, James, worked as a bartender and was described by The New York Times as being “reputed to be a skillful boxer and a hard hitter.”  Also working for McQuillen was waiter Elmer E. Holloway.


Holloway was from a respectable Michigan family, but “he was headstrong and wayward, and left his home in disgrace,” said The Times.  On May 7, 1896 Holloway had “been carousing” with a young woman, Carrie Simon and around 4 in the morning they encountered the bartender who was just leaving the George McQuillen’s saloon.


“Suddenly and apparently without any particular reason, angry words passed between McQuillan and Holloway.  Exactly what the quarrel was about none of the men or the woman seemed to know yesterday, but it was said that McQuillan had made a remark to the woman which Holloway resented,” said the newspaper.


James McQuillen landed two heavy blows on the face of the drunken Holloway, who fell into the gutter and struck his head on the curbstone.  He died instantly.


George McQuillen was still living in the house in 1901 when 40-year old Jennie Smyth caused a ruckus at Sixth Avenue and 17th Street.  Obviously drunk, she was handing out $100 bills to anyone who passed, causing a near riot.


When a policeman arrived, “he found a mob of howling men and boys surrounding a well-dressed woman who was struggling in their midst like the possessor of the pigskin in a football game.  Her clothing was disarranged and she was hilarious over the amusement she was creating.  In one hand she clasped loosely a huge roll of greenbacks.  With the other she separated the bills from the roll, and without regard for denomination scattered them among the crowd,” reported The Times on April 20, 1901.


She was arrested for intoxication and gave her name as Jennie Smith and her address as No. 120 West 148th Street.  Then she changed her mind and said she lived at No. 120 West 28th Street.  In fact, she did not live at either address.  She had $2,000 in cash on her at the time of her arrest.


George McQuillan came to her aid; bailing her out and arranging a cab for her.  He corrected her name with the police, but told them nothing more.  “I don’t know how she ever got $2,000,” he said.


In 1903 the New York Society for the Enforcement of the Excise Law was formed by reformist ministers and the Parkhurst society (a group intent on stomping out the evils of alcohol, illicit sex and other vices).  Agents of the Society busied themselves on Sundays checking to ensure that saloons and liquor stores were shuttered tightly.  If not, they filed formal complaints with the police.


A year later, on January 12, 1904, George McQuillan found himself in the Society’s sights.  He was held on $500 bail awaiting trial for serving liquor on Sunday.


In 1911 Mrs. Otto Kuster ran the boarding house at No. 234 West 22nd Street.  Among her tenants was John D. Edwards who earned a living as a floor walker in one of the Sixth Avenue department stores along what would later be termed “The Ladies’ Mile.”


Mrs. Kuster’s relationship with Edwards apparently went beyond a landlord-tenant affiliation.  The Children’s Society reported that Edwards, “who is a big man,” assumed jurisdiction over her three children.”


Edwards’s form of child discipline was severe and physical.  Neighbors complained to the police regarding the beatings; especially of 10-year old Mary Kuster.  The Society reported that he “was especially cruel to Mary, and, according to the testimony, beat her on the face with a strap.”


On September 26, 1911 the Justices in Special Sessions committed the child abuser to 60 days in the City Prison.


By the middle of the 20th century the Chelsea block had significantly declined.  Around this time the two houses were joined internally and in 1955 there were seven furnished rooms on the combined first floor, and eight on each of the upper stories.  The once elegant residences were reduced to, essentially, a flop house. 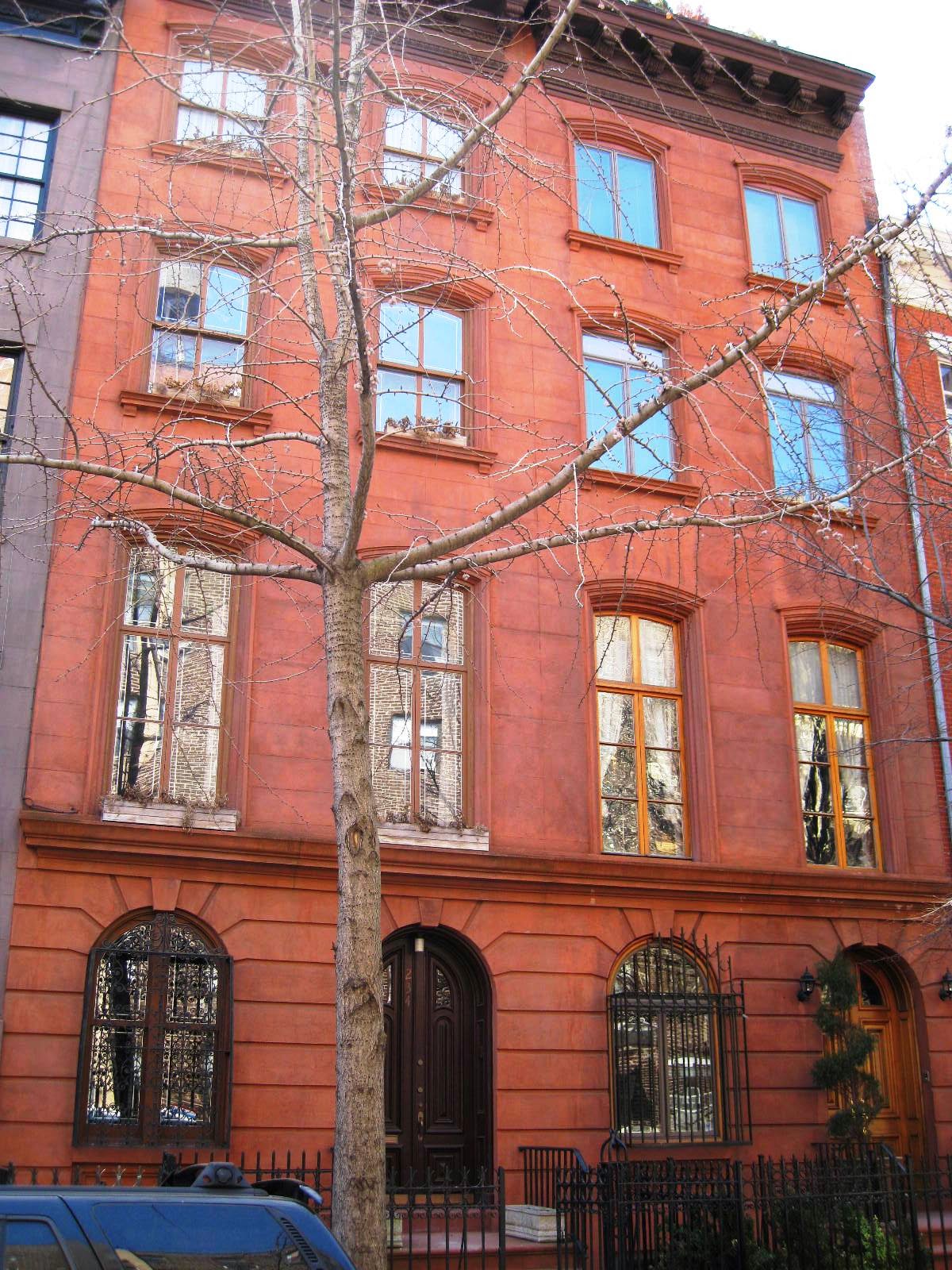 But neighborhoods in Manhattan change and as the century drew to a close Chelsea had become a trendy and popular residential district attracting upwardly mobile young professionals.  In 1989 the two homes were separated and No. 234 was converted to a single-family home again.  No. 236 would follow suit in 2001.  The elegantly-restored homes have returned full circle to their upscale beginnings.