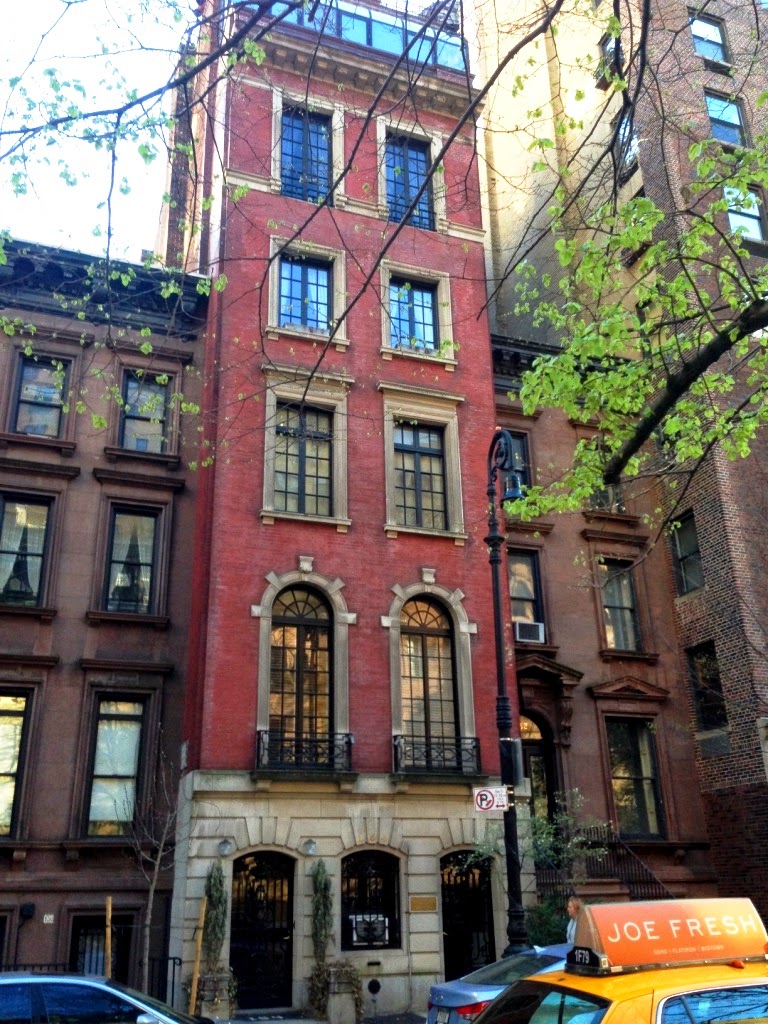 In 1871 real estate men Andrew F. Barry and Ira G. Lane were confident in the development of the Upper East Side—so much so that the offices of Barry & Lane were at No. 1138 Third Avenue, between 66th and 67th Streets.  That year they embarked on an ambitious string of seven speculative rowhouses stretching from No. 150 to 162 East 71st Street.

Barry & Lane commissioned architect W. O’Gorman to design the buildings.  He, too, was busy in the area; and was working simultaneously on four rowhouses on the same block for C. Smith, three more for him on East 73rd Street, and a tenement building for Haree & Smith on East 74th Street.

The houses were intended for middle-class to upper-middle class owners.  Clad in brownstone the Italianate-style homes rose three stories over an English basement and were handsome, if not remarkable.  Barry & Lane put the completed homes on the market in 1872 for $24,500 each—about $450,000 today.

At the time Adele Kneeland was 16 years old.  Born in Hartford, Connecticut to the fabulously wealthy Charles Kneeland, Jr. and his wife Louise Taintor Kneeland, she was educated in private schools both in America and Europe.  The family summered at their sprawling estate, Fairfax, in Lenox, Massachusetts.

Adele’s father, who joined the family firm, Bogert & Kneeland, died in 1866 at only 36 years old.  When her grandfather died in 1881 she inherited a “substantial fortune,” including the summer estate in Lenox.  Single and wealthy she divided her time between Manhattan and Massachusetts.

By the first years of the 20th century the Upper East Side neighborhood around Barry & Lane’s 71st Street row had changed considerably.  Wealthy citizens infiltrated the previously middle-class blocks,  demolishing the old brownstones or heavily altering them.  Where rows of chocolate-colored carbon-copy houses once stood, the streets were now lined with sumptuous Edwardian mansions.

In 1915 Adele Kneeland purchased one of the Barry & Lane houses—No. 154 East 71st Street.  She set the architectural firm of John B. Snook Sons to work redoing it.  On June 5 that year the Architectural Record & Builders’ Guide laid out the work the architects had before them.  “Build new front, extend walls, new 3-story and basement extension (rear), 1-story addition, remove and rebuild interior partitions, etc.”  The proposed cost for the renovation was $12,000 (around $269,000 in today’s dollars).

The result was a dignified five-story mansion in the neo-Georgian style—all the rage for upscale homeowners at the time.  Two doorways—the main entrance and the service entrance—flanked a matching window within the rusticated stone base.  Above, red brick was contrasted by the white stone that outlined the openings.  At the second floor French windows topped with fanlights created the focal point of the design.  Behind them the drawing room and dining room had 13-foot ceilings. 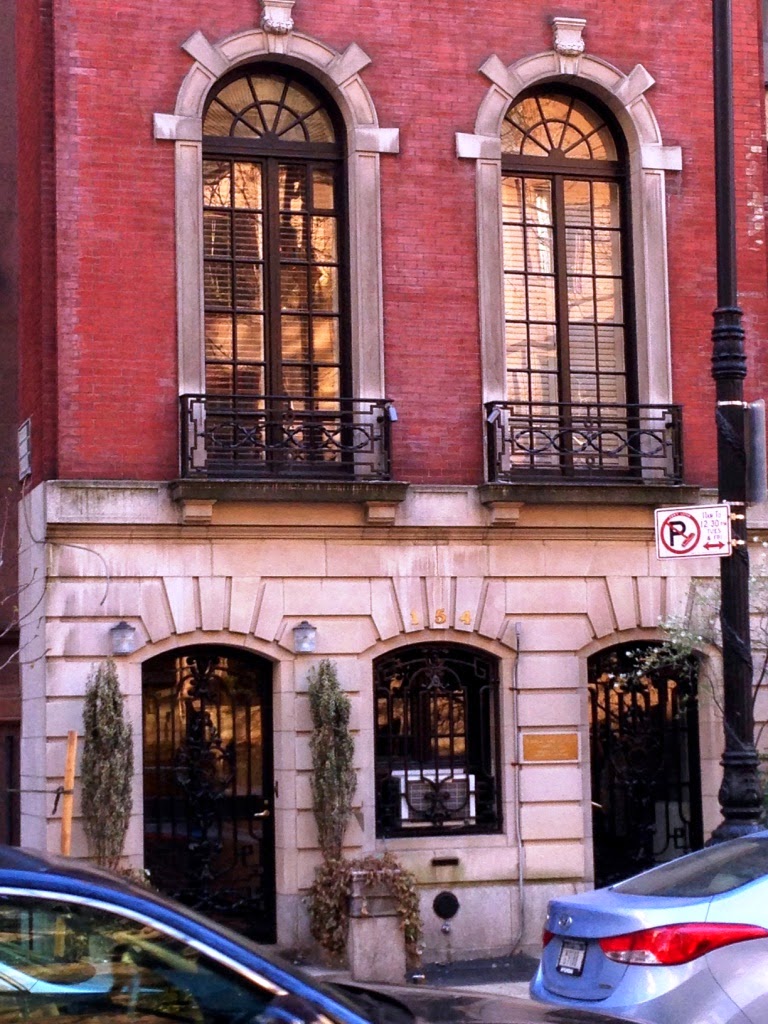 Adele kept herself busy with charitable pursuits.  She was Treasurer of the Down Town Day Nursery for years.  Its purpose was “to care for children between three weeks and six years of age of working mothers, chiefly office-cleaners while they are at work.”  The nursery took care of an average of 39 toddlers a day.

To ensure that she had control over who were her neighbors, Adele purchased the house next door at No. 156 when it became available.  And in May 1916 when Dr. Herbert B. Wilcox put his house on the market, directly behind Adele’s at No. 159 East 70th Street, she bought that one too.  The New York Times remarked that she did so “to protect” her residence.

The Architectural League reported on Adele’s interiors in February 1918.  Saying hers was a “pleasing example of what the refined American desires in a breakfast room,” it added “Both the salon and living room are rich in color tones which harmonize perfectly, and the assemblage of well chosen furnishings is a good exponent of the ‘fitness of things.’”

Adele’s sister, Alice, had married Henry Whitney Munroe at the Lenox estate on October 1, 1885.  He was son of John Munroe, founder of the banking house of Munroe & Co.  The couple had three children, George, Louise and John and by the time the Architectural League complimented Adele’s interiors, the youngest, John, was 26 years old.  On December 5, 1920 Henry Whitney Munroe died on the day after his 61st birthday.  And Adele’s solitary life on East 71st Street would soon change.

Before then, however, Adele went off to Europe for the 1921-22 winter season and loaned her house to the elderly John Munroe and his wife; Alice’s parents-in-law.  But not long after her return Alice and her children would move in.  In 1927 Adele Kneeland brought John B. Snook Sons back to add a sixth story to the house—perhaps in reaction to what she perceived as overcrowding.

The New York financial circle was no doubt shocked when young Henry Munroe filed for bankruptcy in 1933.  Calling him a “member of old family of bankers,” The New York Times noted that John Munroe & Co. “was founded in 1837, and its Paris office had branches in Pau and in Cannes, having done business in France since 1851.”  Apparently embarrassed by the failure, Henry was less than forthright in the petition filed in the United States District Court.  “He described himself as a student living at 154 East Seventy-first Street,” said The Times.

On April 18, 1934 niece Louise was married to author Philip Ainsworth Means in the Church of the Resurrection on East 74th Street.  The New York Times reported “The ceremony was followed by a reception at the New York home of the bride’s mother, 154 East Seventy-first Street.”

By 1936 Adele seems to have been living alone in the house again.  That winter she leased the house to Elbridge Gerry Greene.  She would never pass another winter in the 71st Street house.  The following year on the morning of September 16, 1937, the 81-year old died in her summer estate, Fairlawn.

The family took little time in making over Adele Kneeland’s properties.  Within two years Fairfax was leveled.  Her formal gardens there had won national acclaim and The New York Times noted “Her terraced garden was the scene of many important society events.”

Nos. 156 East 71st Street and No. 159 East 70th Street were “remodeled by her heirs and executors into apartments,” said The Times later; and on July 20, 1941 the newspaper reported on the conversion of Adele’s house into ten apartment suites as well.

“The apartments range in size from one room, bath and kitchenette to four rooms and two baths.  Most of them have wood-burning fireplaces.  The rear rooms overlook the garden.”  The report said that “The original architectural details of the house, most of which have been retained in the process of remodeling, show the French influence, particularly in the mantels and panel moulding.” 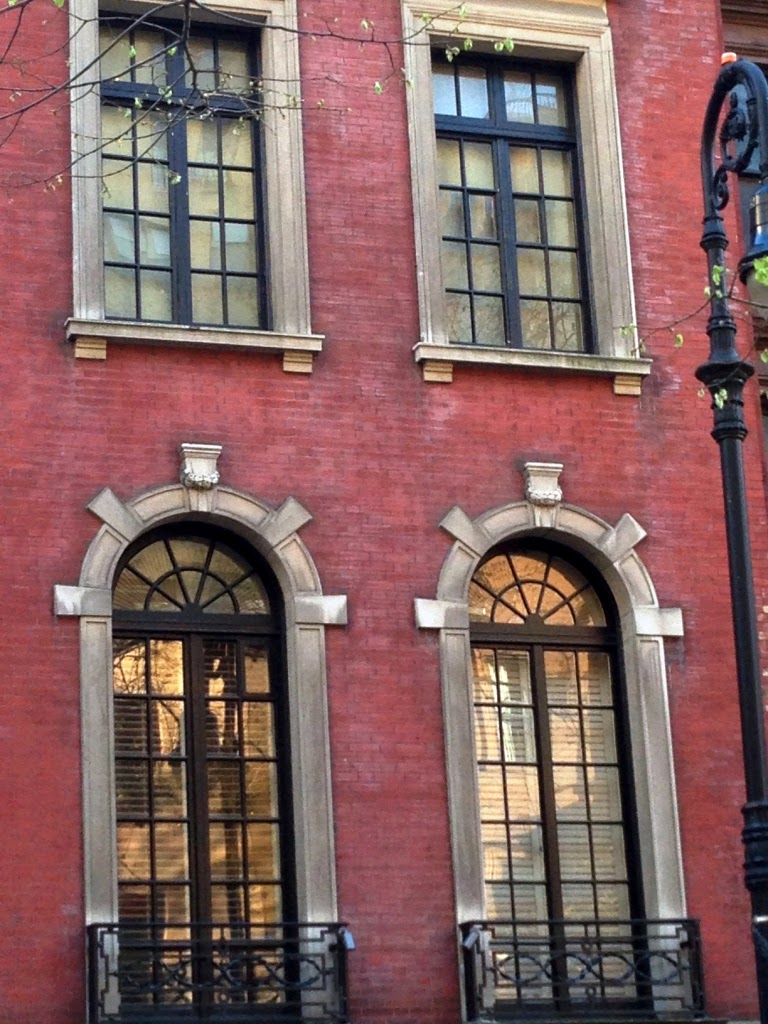 Interestingly, the architectural firm chosen for the conversion was Adele’s favorite—John B. Snook Sons.  It is perhaps this choice that resulted in the sympathetic interior alterations.  Subsequent conversions would occur—one in 1970 when the top two floors were merged into a single duplex; and, according to long-term resident Michael Carter, two doctors' offices were created on the first two floors around 1982.

"Not long after that the duplex on the top two floors was renovated and what was a rear outdoor terrace on the 5th floor became a two floor glass solarium," according to Carter.  That design was done by Jay Spectre in concert with Geoffrey Bradfield, he said.

Renovations continued when, a few years later, the third floor front studio was combined with the rear one-bedroom to form a single apartment.  It is currently home to Jack Kilgore & Co. (Kilgore Gallery) which deals in old master paintings.

The final renovation, 2009 resulted in a triplex on the top floors.  Today Adele Kneeland’s impressive make-over of an unremarkable 1871 brownstone still stands out on the East 71st Street block as it did in 1916.

photographs taken by the author
Posted by Tom Miller at 3:57 AM