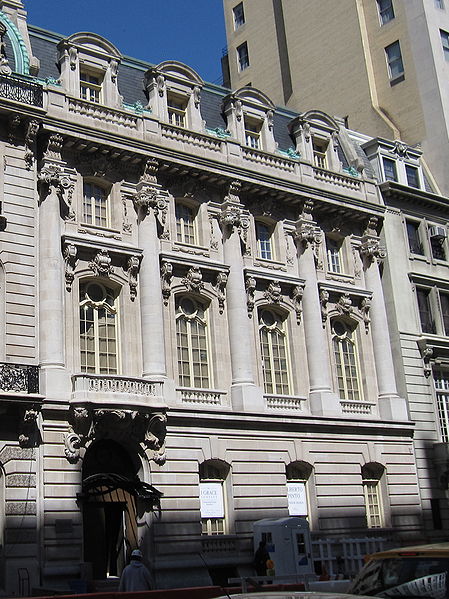 Until 1882 Jessie A. Robbins was not a member of the elite Fifth Avenue social clique. Instead she lived across the East River at 29 Monroe Place in Brooklyn, a member of the fashionable “Heights Set.” Her father, Daniel C. Robbins was a successful partner in a drug firm. Jessie would longingly read newspaper accounts of the grand balls and dinner parties hosted by Mrs. Astor or one of the Mrs. Vanderbilts.

She was, as The New York Times, later dubbed her, “ambitious.”

Jessie Robbins’ Brooklyn days came to an end when she married Henry T. Sloane of the W. & J. Sloane carpeting concern. She now lived on 54th Street mere steps from 5th Avenue’s “Vanderbilt Row,” where the mansions of the Vanderbilt family lined up one after another. The new Mrs. Sloane relished her new role and entertained “with an enthusiasm which caused much remark.”

A decade later her wealthy neighbors were moving northward as Millionaires Row became increasingly commercial. In 1894 Henry Sloane purchased the site at 9 East 72nd Street in the newly-fashionable area just off Central Park. He commissioned Carrere & Hastings to design his French limestone mansion which was completed two years later towards the end of 1896.

The street level formed a rusticated base for the posh house, the second floor of which was dominated by four great French-style windows. A dormered slate mansard roof with copper trim sat behind a classic balustrade. Overall was exuberant ornamentation of carved swags and frothy decoration.


By the time they moved in, however, all was not idyllic in the the Sloane household. Henry had discovered that Jessie was carrying on an affair with the dashing and wealthy Perry Belmont, son of August Belmont.

When Jessie threw her gala opening party for over 200 in January of 1897 The New York Times deemed it “a much more exclusive affair than Mrs. Astor’s recent ball.” Guests filed in through “the gray room” where Mrs. Sloane received them before they entered the ballroom where Berger’s Gypsy Hungarian Orchestra played.

“Mrs. Astor wore a white satin gown and a dazzling display of precious stones and she was accompanied by Mrs. And Mrs. John Jacob Astor IV; the Stanford Whites were there…Mamie Fish was escorted by her husband, Stuyvesant, and Mr. and Mrs. Ogen Mills, Chauncey Depew, and William Kissam Vanderbilt also attended, along with several rising stars of the younger generation,” reported The Times.

What the reporter did not mention -- although noticed by everyone present -- was that the hostess’s husband was conspicuously absent.

Henry Sloane had moved into a hotel on upper Fifth Avenue.  In 1899 the Sloanes divorced amid much publicity and scandal. Within five hours of the divorce decree, Jessie married Perry Belmont. Although Sloane had earlier given Jessie the deed to 9 East 72nd Street, Belmont requested that his new wife return the property to her former husband.

Sloane never went back to 72nd Street, however.   He commissioned mansion architect C. P. H. Gilbert to design a home for himself and his daughters at No. 18 East 68th Street.  In the meantime he rented the 72nd Street house to Joseph Pulitizer who moved in with his wife, their five children and 17 servants. The Pulitizers lived there until 1901 when banker James Stillman purchased the house. A bachelor, Stillman remained in the house with his nine servants until his death in 1918. The next two decades saw John Sanford in the mansion, who made his millions in the carpeting business, just as Sloane had.

With Sanford’s death, Jessie Sloane’s grand palace ceased to be a private home for many years. It was taken over by a religious organization and then, in 1964, the Lycee Francais purchased it. Amazingly neither organization altered the building – inside or out – to any great degree; other than some instances of industrial-type lighting and fire-proof doors.


Original detailing down to the glass beaded light fixtures, the doorknobs and the chandeliers remained intact. The French paneled walls and the marble and parquetry floors are as they were the night of Jessie’s grand party.

The Lycee Francais joined the Sloane House with the French mansion next door and when the buildings were sold in 2010 for $26 million to the emir of Qatar, he brought in Thornton Tomasetti to blend them into a single grand residence.

Exterior restoration was undertaken on the slate roof, the copper trims, decorative iron, and the stone and brick façade. In a move of which Jessie Sloane may not have approved, the new owners had Thornton Tomasetti carefully excavate an in-ground, indoor pool. All the grand wooden windows were replaced with custom units, which demanded the meticulously matching of the decorative carving and the substitution of insulated glass.


When completed the joined mansions became one of the most sensational residential properties in New York City. Jessie Sloane would be envious.