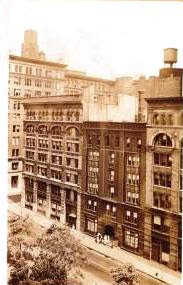 It was  not always easy for Victorian bachelors to find acceptable lodging. Unmarried men, it seems, were looked upon with suspicion by many landlords and boarding house owners. “That fortunate or unfortunate class,” said the New York Tribune on August 8, 1879, were often “refused tenancy in the better class of flats.” This problem did not escape the notice of Lucius Tuckerman, a wealthy iron manufacturer who lived at No. 22 Washington Place.

Intrigued by a new concept in apartment house management, Tuckerman contracted architects McKim, Mead and Bigelow (Stanford White would not join the firm for a few months) to design an apartment building exclusively for bachelors. He chose 80 Washington Square East as the site, within sight of his elegant townhouse.

Photograph NYPL Collection
The Tuckerman Building was finished in the fall of 1879; a restrained red brick structure with stone trim and cast iron bay windows on the three middle floors. Probably because of his interest in the arts – not only was he vice-president of the Metropolitan Museum of Art and a life member of the National Academy of Design, he owned a “fine collection of pictures” – Tuckerman had four artist’s lofts constructed on the sixth floor where natural sunlight could pour in. In all there were thirty-three apartments marketed to unmarried men who would pay a yearly rent of between $350 and $550.
The tenants bathed using bowls and pitchers; the designers having opted against sinks and plumbing “for the sake of keeping out sewer gas,” as reported by The New York Tribune. There was, however, a 24-hour elevator.
To make life easier for a womanless male, the building offered maid service, a bootblack and, if the tenant desired, the janitor would provide breakfast from the basement.
Before long The Tuckerman became known by the tongue-in-cheek name, “The Benedick” – a literary nod to the confirmed bachelor in Shakespeare’s Much Ado About Nothing.
Quickly, possibly because of the lofts, the building was filled largely with artists. By 1880 Winslow Homer, John LaFarge, Alder Weir and George Maynard were living there. Albert Ryder moved in and stayed for a decade.
A few years later Stanford White, whose wife preferred to stay at their Long Island estate, rented rooms here for a group calling themselves “The Sewer Club.” The architect's friend, John LaFarge, was a member. Because of White’s reputation as a womanizer, historians hint that the rooms were used for “private parties and illicit encounters,” according to Emily Kies Folpe in It Happened On Washington Square.
It was still a bachelor apartment when, in 1906, the Alpha Kappa Psi fraternity lost their meeting room at 28 East 11th Street where they had paid $1 a week rent. Their rent jumped to over $1 a day when they took two rooms and a bath at The Benedick for $31.25 a month. Four years later they added two more rooms to their lease at $51.50 a month. 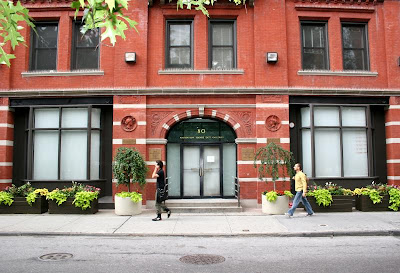 In 1916 Scofield Thayer married Elaine Orr in Troy, New York.   It was a posh affair attended by Thayer’s best friend, Edward Estlin Cummings – better known later as EE Cummings. Soon afterwards Thayer became less than enthusiastic about the marriage and moved back to the Benedick; giving Cummings and Thayer’s wife the necessary latitude to carry on an affair – one by which Cummings fathered her child.  In his Benedick apartment, Thayer, at least once, wrote a check to Cummings to cover the costs of the poet's wining and dining of his wife. 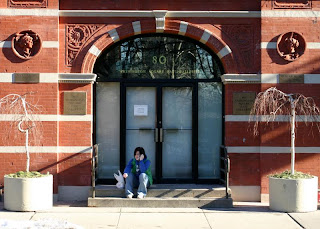 New York University purchased The Benedick in 1925 and, after nearly razing it in 1927, converted it into the Pauline Goddard Hall dormitory. At some point the wonderful cast iron bay windows were removed.  Again in 1969 the school planned demolition and, again, it escaped the wrecking ball. Instead, in 1974, it was renovated as the 80 Washington Square East Galleries. Appropriately, it now spotlights the thesis exhibitions of MA and MFA candidates from the Department of Art and Art Professions.
The façade was restored in 1987 (it had been painted white) and some tolerable modernization was effected. The interiors have long ago been destroyed. Overall, however, the old Benedick retains its 19th Century charm. 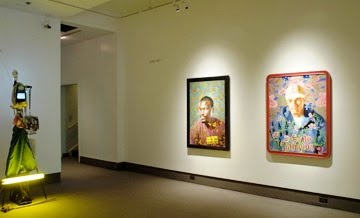