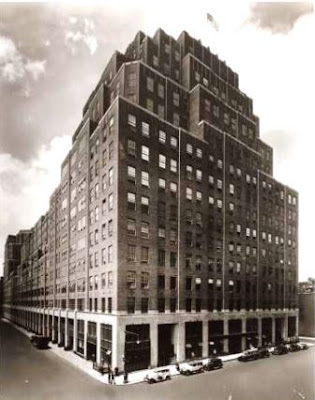 Photo NYPL Collection
In the first half of the 20th Century the Port Authority of New York and New Jersey handled tons of incoming freight.  At the height of the Great Depression a gigantic consolidation and redistribution warehouse was planned in the Chelsea area of Manhattan close to the shipping piers on the Hudson.  The construction would not only provide a badly needed warehouse, it would create jobs for thousands.  And size was not a restriction.

Designed by Lusby Simpson of Abbot, Merkt & Co., the brick and concrete Art Deco monster engulfed the entire block from 8th Avenue to 9th between 15th and 16th Streets.  Simpson, who became best known for his redesign of Bryant Park, managed to balance bulk with proportion.

When completed in 1932, The Port Authority Commerce Building, or Union Inland Freight Terminal Building No. 1, was one of the largest buildings in the world in terms of square footage.  Nearly all of the 17 floors could accommodate two full football fields -- a staggering 2.9 million square feet of interior space.  It contained twice the floor space of its contemporary, the Empire State Building, completed a year earlier.

Two of the freight elevators were large enough to transport 30-foot semi trucks to the floors above for loading and unloading.  One of the first helipads in the city was on the roof, opened in the 1950s.

At street level, huge Art Moderne panels decorate the entries and window areas.  For the convenience of workers, the building had direct subway entrances eliminating the need to exit the building on inclimate days.


It was, according to Joe Mysak, author of Perpetual Motion: The Illustrated History Of The Port Authority Of New York & New Jersey, "...built as this truck palace, almost an economic incubator for New York City"
The building set a legal precedent for public properties involved in commercial business by reserving the upper floors as rental space for private concerns.  It was here that Chemical Bank placed their enormous check processing offices.  The largest paper check processing center in Manhattan, the majority of checks written in New York City passed through this facility.

The building housed the warehouse and Port Authority offices until 1972 when they moved to the World Trade Center.  The massive 8th Avenue building was sold at auction to Sylvan Lawrence Company who rented space to small companies for over two decades.

In 1998 Sylvan Lawrence Company took steps to dissolve its company.  The Port Authority Building was put up for sale.  In a $387,500,000 deal, Taconic Investment Partners took over the building. After investing $50 million of capitol improvements, Taconic marketed the space to telecommunications companies based on the sturdy floors and fiber-optic infrastructure. 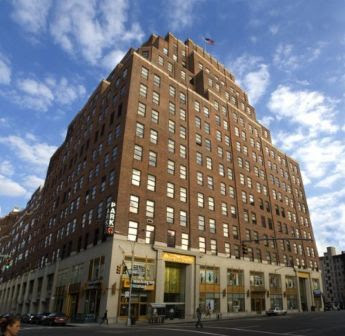 After September 11, 2001, high tech companies sought to relocate north of the Financial District.  In the meantime, the somewhat seamy Chelsea neighborhood was slowly changing.  In the once sordid Meat Packing District just west of the building high-end boutiques and cafes began appearing. The mom-and-pop stores on Eighth Avenue were being replaced by trendy shops and art galleries were established in former warehouses.  The changes would make a huge impact.

In 2009 the High Line opened, a unique park on the old elevated train bed along 10th Avenue.  Immediately the area west of the 111 8th Avenue blossomed.  Across the street the sleek Apple Store opened and the Chelsea Market, a mall-like collection of food and specialty stores, took over an old warehouse.  It was the sort of environment that would attract companies like Google. 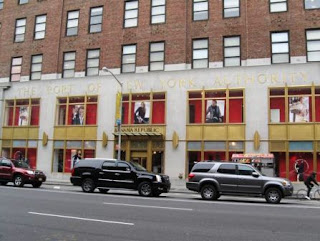 Taconic had no intentions of putting all its eggs in the high tech basket, however.  The building attracted diverse tenants: fashion offices (Armani A/X and Nike USA), arts publisher and media company LTB, and Todd Street Productions.  In 2006 the Atlantic Theatre Company opened a 99-seat theatre in the sub-basement.

On December 3, 2010 Google purchased the entire building for $1.9 billion dollars.

Impossible to ignore, the Port Authority Commerce Building is an stunning example of Art Deco commercial architecture and an exemplary illustration of re-use of a vintage structure.
Posted by Tom Miller at 2:42 AM