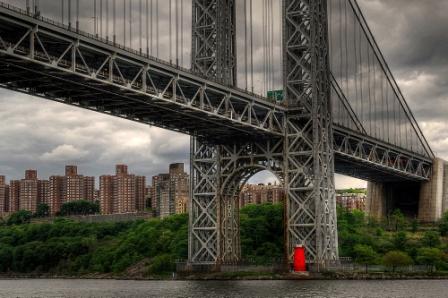 The great grey George Washington Bridge spans the mighty Hudson River at a point where trecherous currents are caused by the jutting point of land called Jeffrey's Hook.  Barely noticeable there at the river's edge, a little red 19th Century lighthouse stands.

In 1889, long before the bridge or the lighthouse, a 20-foot high post outfitted with two red lanterns was erected on the site to warn ships and barges of the outcropping and shoals.  The lanterns were replaced with brighter lights six years later.

Meanwhile, in Sandy Hook, New Jersey, a 55-foot high bright red lighthouse had been erected in 1880.  The little lighthouse warned ship captains until 1917 when it was dismantled and put into storage at Stapleton, Staten Island.

By 1921 the traffic on the Hudson required an upgrading of the Jeffrey's Hook warning lights.  The little lighthouse from Sandy Hook was taken out of storage and reassembled by the Coast Guard.  The lower 15 feet of the structure were discarded and the little lighthouse got littler -- down to 40 feet.  The beacon, now known as The Jeffrey's Hook Lighthouse, was outfitted with a new lamp that rotated every 3 seconds and a bell and fog signal. 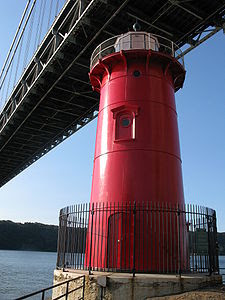 Exactly a decade later the massive new bridge was opened overhead and, because of the navigation lights on its towers, the little lighthouse was suddenly obsolete.  It sat, now useless, in the shadow of the huge bridge.

Inspired by the diminuative tower, Hildegarde H. Swift and Lynd Ward wrote a children's book in 1942, The Little Red Lighthouse and the Great Grey Bridge."  It told the story of the dejected little lighthouse that seemed to have no purpose anymore.  Then on one particularly foggy night the lights of the bridge were shrouded and only the bell and light of the little lighthouse saved the boats.  Even little things, the story taught, can be important.

Thanks to thousands of school children the Little Red Lighthouse stands on Jeffrey's Hook today, still shining -- the last lighthouse in Manhattan.  They proved, as did the lighthouse in the book, that you don't have to be big to make a difference.
Posted by Tom Miller at 2:38 AM