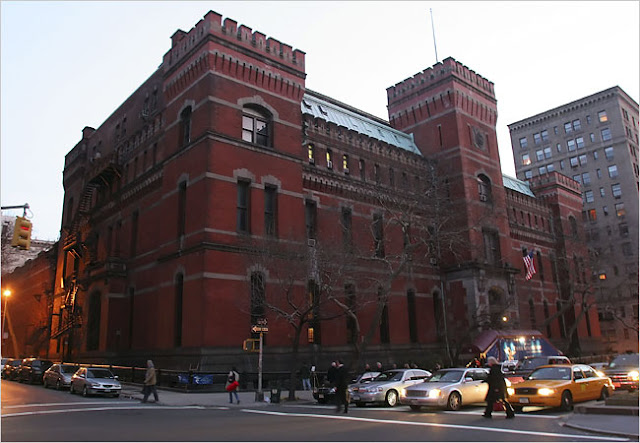 New York's Seventh Regiment was formed in 1806 when outraged citizens demanded retaliation against the British who blockaded the harbor and fired on American ships, killing a helmsman.

The city at the time had a population of just over 60,000.  The regiment was called into action just six years later when they marched off to serve in the War of 1812.  It was the Astor Place Riots in 1849, though, that changed the fortunes of the group.

Over 20,000 working class rioters, ostensibly protesting against a British actor appearing at the high class Astor Place Opera House but actually striking out against the upper class, filled Astor Place.  Here, surrounded by the homes of New York's wealthy, they lobbed bricks and rocks, breaking windows and causing panic.

The Seventh Regiment responded, firing into the crowd to quell the disorder and driving away what Harper's Bazaar called "the bleeding rioters, demoralized and defeated."  When it was over 25 were dead and 120 hurt.  The wealthy, however, did not forget their champions.  The Regiment not only became a favorite among New York's elite, they enlisted in force, earning it its nickname "The Silk Stocking Regiment."

Just after a new armory was built for them in 1860 on the Bowery, the Regiment was dispatched to defend Washington DC when it was cut off by rebel forces; it was first volunteer unit called into action in the Civil War.

After the war, it became apparent that the elite group needed a new home.  Not only had the population it guarded migrated north, away from the present armory, but armories had become social clubs as well as drill houses.  The monied members wanted a more impressive space in which to gather.

While the city donated the land at Fourth Avenue (soon to be renamed Park Avenue) between 66th and 67th Streets in 1875, the depression at the time precluded public funding for the building.  Private fund raising was necessary.  Money poured in not only from the likes of Vanderbilt, Lenox and Rhinelander, but from regular citizens and businesses who supported the group they regarded as their protectors.

The money for the building was raised; however there was not enough to pay for the outfitting and decorating of the interior.  As the building was being completed, a lavish indoor fair was organized, opened by President Rutherford B. Hayes on November 17, 1879.  Expensive items were sold such as carriages, organs, boats and even pedigreed house pets.  There were entertainments, an art exhibition, and exotic bazaars.

The New York Times reported that a "peculiarity of the Seventh-Regiment New Armory Fair is that every day the crowd is larger, more enthusiastic, and more liberal in their purchases, and more reckless in their patronage of prize drawings than on any preceding day."


﻿﻿
The money was raised and the elite Seventh Regiment gained a Park Avenue showplace -- the only armory in the United States ever built with only private funding.

Designed by regiment member Charles William Clinton, the armory set the bar for armories to come.  A forbidding fortress-looking structure in red brick and gray granite, it had all the features of a medieval castle:  narrow slits for archers, battlements and 6-inch thick oak doors, protected by a huge bronze gate, wide enough to accommodate four men marching abreast.  A tall, slender open bell tower rose high over the entrance.


James D. McCabe, Jr., in his 1882 New York by Gaslight described the armory as having "the strength of a fortress and the elegance and comfort of a club-house.  The regimental drill room is 300 by 200 feet in size, and besides this there are ten company drill rooms, an officers' room, a veterans' room, a field and staff room, a gymnasium, and six squad drill rooms."

Clinton's drill room took inspiration from the Grand Central Depot which had the largest unobstructed interior space in the country.  Eleven cast iron trusses -- 127 feet from side to side -- supported the vaulting ceiling.


But the administrative rooms were the hallmark of the armory.  They were designed and furnished by firms like Louis C. Tiffany, Herter Brothers, Pottier and Stymus Manufacturing, Roux and Company, George C. Flint, and A. Kimbel and J. Cabus -- the premier interior design firms of the day. 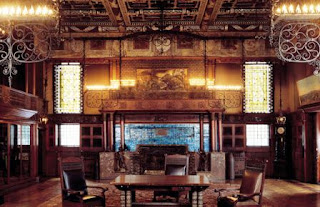 The interiors were then, and remain today, the pinnacle of 19th century taste and materials.  Stained glass, tilework, exotic carved woods, statuary, custom designed furnishings, wallpapers and stenciling, frescoed ceilings -- the armory had it all.

In 1909 the slender bell tower was removed and a fourth floor added.  In 1931 yet another floor was added, changing the proportions of the building. 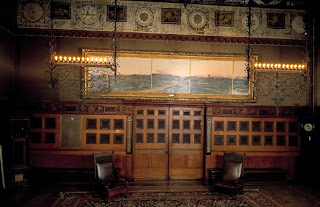 
The latter part of the 20th century was cruel to the Armory, which was allowed to fall into disrepair and neglect.  In 2000, the World Monuments Fund listed the Seventh Regiment Armory as one of the top 100 most endangered historical sites in the world.  The irreplaceable rooms were in a serious state of dilapidation.

In 2006 the Seventh Regiment Armory Conservancy was formed and managed to obtain a 99-year lease from the state.  By 2009 $100 million was raised as part of a planned $150 million restoration to save the historic building and its exquisite interiors.