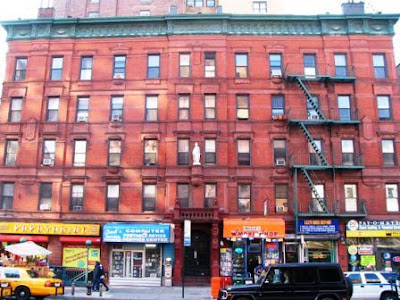 At the time of the Civil War, wide 14th Street around 7th Avenue was lined with elegant brownstone and brick residences.  The 1854 Academy of Music, the opera house attended by names like Astor and Vanderbilt, sat regally at 14th and Irving Place.

But neighborhoods in New York constantly change.  By the 1880s 14th Street was no longer strictly residential.  The meatpacking district was growing at the far west end.  The new Metropolitan Opera House which opened in 1883 drove the Academy of Music to close in 1886 and by 1888 the venerable institution was offering vaudeville.  Businesses took over the street levels of the brownstones.

While this change was taking place, the middle class of Manhattan was growing.  Merchant class families needed affordable yet respectable housing in which to raise their families.  Developers devised the concept of roomy, attractive apartment houses a step up from tenements yet nothing so grand as the luxury apartments being built for the wealthy.

Marketed with the sophisticated-sounding name "French Flats," one of the very first of these was built by Jersey City businessman Henry Meinken at the corner of 14th Street and 7th Avenue.  Meinken called on James W. Cole to design his new building in 1888.  Cole was a favorite of the Astor family and he built several factory, warehouse and apartment buildings for them, several a few blocks west on 14th around Hudson and 9th Avenues.

It was completed in 1889 and given the cultured name "The Jeanne d'Arc."   The five-story brick building with brownstone trim had commercial space on the street floor and 8 commodius apartments above -- two apartments per floor.  To set the building apart from the baser tenements, Cole added an attractive pressed metal cornice and carved brownstone sills and lintels.  Some of the windows received decorative pediments and some were "supported" by scalloped brownstone half-basins. 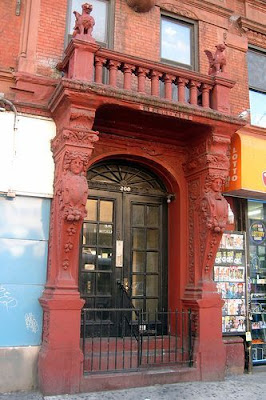 But visual impact was reserved for the entranceway on 14th Street.  In a free-handed mixture of architectural periods, imposing heavily-carved carytids support a classical balcony with medieval balusters, topped by two fierce-looking winged griffins.  Above the balcony a glistening white statue of Joan of Arc sits on a weighty brownstone base.
Although the official address for the Jeanne d'Arc is 62 Seventh Avenue, Meinken's 14th Street entrance gave the residents the more impressive-sounding 200 West 14th Street mailing address.

The French Flat movement did not arrive without its detractors.  The New York Times discussed the trend on September 24, 1899.  "The intermediate dwellings, the so-called 'French Flats,'" it said, "are those upon which we really are in most urgent need of ... a standard.  We have apartment houses for the rich designed by competent architects.  We have tenement houses for the poor designed by competent architects.  But no competent architect has ever been invoked, that we know of, to design dwellings for the great middle class...whose members cannot afford a whole house, nor yet a "swell" apartment, but can afford a rent which, in any other city than this would secure a healthful and comfortable dwelling."

"To call the things that are actually provided 'French Flats' is to insult a friendly nation," The Times went on.  "Nothing like them was ever seen or would be possible in France."

The problem with buildings like the Jeanne d'Arc, according to the newspaper, was lack of light (the bedrooms were "dark cells") and ventilation.  While the upper-class apartment residents enjoyed the convenience of elevators, the middle class renters were walking up five floors exactly as were the tenement dwellers.  What were marketed as light courts were in actuality, said The Times, "a flue, a conduit not for light and air but for sounds and smells."

The French Flat solution for housing middle-class families, however, remained viable for decades.  And despite the problems contemporary critics found with the design, the Flats filled a crucial void in the late 19th and early 20th Century housing market. 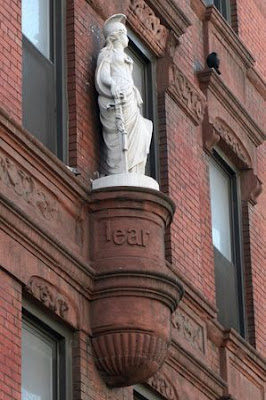 The Jeanne d'Arc is the earliest surviving example of a French Flat building on 14th Street and one of the earliest in the city.  The exterior is in a remarkable state of preservation.  The ornate cornice is intact and the brownstone detailing is in overall good shape.  Most remarkable is that the statue of Joan of Arc still stands over the doorway more than a century after being placed there.
The carved brownstone entrance has been painted a barn red and a portion has been chopped off to accomodate the widening of the sidewalk.  The many-paned entrance doors and fanlight appear original.  On the support beneath Joan, the words "JEANNE D'ARC" which until a few years ago stood out in deep relief, have sadly been mostly lost through well-intentioned by clumsy maintenance.
Posted by Tom Miller at 4:39 AM