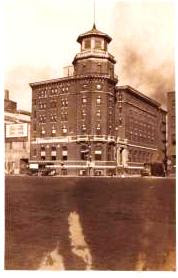 When the surviving crew members of the H.M.S. Titanic reached the port of New York in April 1914, they were taken to the Seamen’s Institute of the American Seamen’s Friend Society on Jane Street. Here they received food, clothing and a place to sleep.  The following day they would participate in a memorial service in the Institute’s auditorium, singing “Near My God to Thee” – the same hymn the ship’s band played as she slipped beneath the frigid waves.  The New York Times reported that they sang with “a mighty, roaring chorus.”  Before long most of the crew would be penniless; the White Star Line discontinued their pay when the Titanic sank.

The neo-Georgian building where they stayed was erected in 1908 after the institute outgrew its former structure. Organized in 1828, the Society ostensibly sought to give aid to “distressed sailors” and to introduce civilizing influences on them.  Essentially it was a Christian reform organization.


The Jane Street facility offered 156 cabin-like rooms for seamen, approximately 7-feet square with a cot and a small item of furniture for storage.  Bathrooms were shared in the hallway.  Larger rooms were supplied to officers and other crew members. Seamen paid 25 cents a night while the officers paid double. By February of 1909 over 16,000 sailors had checked in.

William Alciphron Boring, who co-designed the magnificent Immigration Station on Ellis Island, designed the structure.  Keeping to the maritime theme, he placed an octagonal tower at the corner, topped with a lighthouse complete with beacon. The sailors’ rooms lined up one after the other on either side of the corridors inside, mimicking the cabins of a sailing ship.

Built across from the Cunard Line pier and just ten blocks from the White Star piers, his red brick structure rose six stories and included a handsome dining room, an auditorium that seated 400, a chapel, and amusement rooms that were segregated by rank.  It was in the first floor meeting room that the Board of Inquiry regarding the sinking of the Titanic was held.

The Society boasted that the Institute provided the sailors with “a bright, airy, comfortable place to sit without being annoyed by the fumes of liquor or soul-rasping profanity.”

In 1931 the Society erected a more modern facility on West 20th Street and the Jane Street building became an annex.  By 1933 there were problems.  Seventy cots were crammed into the auditorium to accomodate the over-crowded space and sailors refused to comply when asked to clean up after themselves. When the police were called in, the seamen pelted them and the institute staff with chairs and books.

The lighthouse was removed from atop the tower when the Y.M.C.A. purchased the building from the Seamen’s Friend Society in 1944. Only a decade later it had become the Jane West Hotel and little by little it degraded. By the 1960s it had become an SRO hotel filled with drug addicts, prostitutes and other shady characters. Sadly neglected the building was derelict and vermin-ridden when it was put up for sale in 2007. 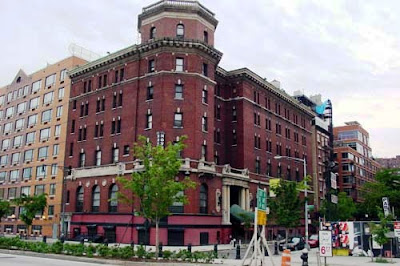 Local resident Sean MacPherson and his partner Eric Goode bought the old Seamen’s Institute with the intention of renovating it to a clean, affordable and quirky hotel, “The Jane.” The residents, who were paying $200 a month, had other ideas.

They mounted a full-fledged war against MacPherson and his renovation. They obtained a court date to protest harassment, such as “constant hammering.” The new management offered $10,000 to one couple to move but they refused; holding out for more. When the management announced they were entering their room, the same couple barricaded the door.  Things did not start smoothly for The Jane.

Eventually, The Jane opened. The small cabin-like rooms still remain; although now they are outfitted like a cabin cruiser with polished wood and brass. “We hope to resurrect an authentic slice of idiosyncratic New York, bathrooms down the hall and all,” said MacPherson. 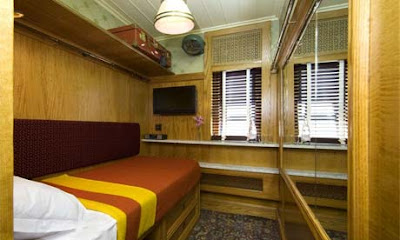 Photograph The New York Times
More trouble came in 2009 when the former auditorium, now called The Ballroom, became a trendy nightspot. The patrons, unlike those a century earlier, were apparently not "annoyed by the fumes of liquor or soul-rasping profanity."  The tranquility of the quiet residential Jane Street was now broken by masses of up to 300 patrons waiting to get in, of honking taxis, and of amplified music from the D.J.’s console that The New York Times said “mimics a Napoleonic-era Egyptian-revival daybed, under the gaze of stuffed pheasants and a bighorn sheep.” The club was closed down for numerous quality-of-life violations.

Today things are looking brighter for The Jane. The Ballroom, where crewmen of the Titanic once sang “Nearer My God to Thee,” is re-opened – and quieter. The cabin-like rooms with the bathroom down the hall go for $99 a night (officer’s cabinets are available for a higher rate with in-room baths).  And a piece of New York history has been saved from the wrecking ball.
Posted by Tom Miller at 2:44 AM