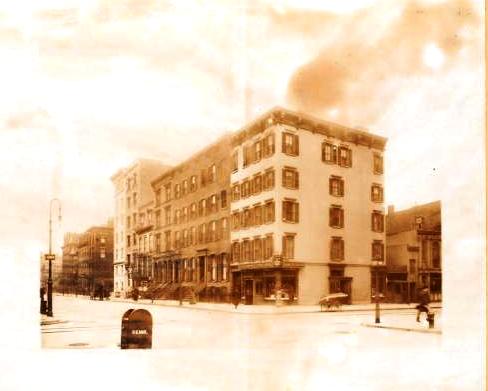 Photograph NYPL Collection
Two years before Samuel Ruggles purchased the land that he would develop into the elegant Gramercy Park, the small Portland Hotel was built at few blocks south at the corner of 18th Street and Irving Place.  Finished in 1829 the red brick vernacular building housed a grocery store on the street floor.

At some point, possibly as early as 1852, the grocery became a saloon; however the first positive documentation of a tavern dates to 1864.  By then the Civil War was nearing an end and the homes and mansions on Gramercy Park were firmly established.  Patrons at the tavern sidled up to a 30-foot carved rosewood bar behind which was an impressive mirrored Victorian backbar.

In 1899 brothers Tom and John Healy purchased the tavern, renaming it Healy's Cafe.  In the rear of the saloon a dining room offered full meals.  It was entered either through the bar or by a separate side street door; a practice customary in Victorian days so ladies did not have to pass through the saloon.

Nearby at 55 Irving Place lived William Sydney Porter.  Porter made Healy's his neighborhood watering hole and, almost nightly, sat writing in the oaken booth just inside the entrance.  It was from this booth that he wrote many of his short stories under the pen name O. Henry; the most famous being "The Gift of the Magi" in 1905.

Potential problems arose for the Healy brothers when Prohibition was enacted in 1920.  They ran the tavern until 1921, then simply half-heartedly disguised the bar as a flower shop and continued business.  Current owner John Reynolds has said "They didn't kill themselves changing the facade.  I almost laugh when I look at the pictures."

The owners were apparently well-connected.  Liquor was provided by Joseph Kennedy and local politicians stopped in, Prohibition or not.

Pete Belle purchased the bar in 1932, changing the name to Pete's Tavern.  Little changed inside as the years passed and politicians and celebrities continued to make Pete's home.  Flamboyant Mayor Jimmy Walker drank here and President John F. Kennedy ate here more than once with the First Lady.  After noticing a photograph of his parents on the wall, John F. Kennedy, Jr. became a daytime regular.

Pete's has appeared in numerous advertisements (Miller Brewing, Samuel Adams and, unexpectedly, Hanes), television shows and movies.  Here Miranda Hobbs proposed to boyfriend Steve Brady in Sex in the City.  And here Kramer set up a sting operation involving Jerry’s accountant in the Seinfeld episode “The Sniffing ."   Robert Mitchum downed a drink here in Two for the Seesaw, and it appeared in Across the Sea of Time, Ragtime, Endless Love, The Guru and an episode of Law and Order. 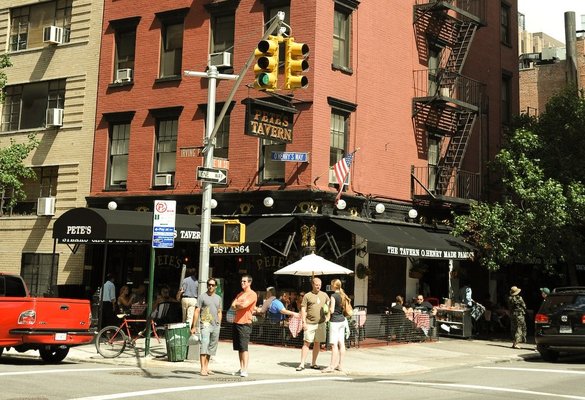 Today the long rosewood bar remains, the pressed tin ceiling is still in place and a brass plaque commemorates O. Henry's favorite booth inside the door.  And for all its history and celebrity, Pete's Tavern is still more of a neighborhood watering hole than a tourist destination.
Posted by Tom Miller at 2:51 AM